Analyzing the cost and context of the Spurs' injured starting trio

You don't have to look too far to be afforded a degree of comfort, and a greater sense of context, within the Spurs' sudden injury troubles. With the help of InStreetClothes.com, PtR takes a look at the history and detail of San Antonio's strategic management of sidelined contributors.

Share All sharing options for: Analyzing the cost and context of the Spurs' injured starting trio

Injuries and nagging health concerns are a given in any NBA season. How a team manages to adapt, adjust, and cope with this, however, is far from set in stone.

There are a host of factors to consider when looking toward the price both financially, and in terms of the on-court production of players sidelined by injuries. The extent of damage, the strength of schedule in said player's absence, the expertise of the athletic/training staff, history of prior ailments, and which players on the roster are available to fill the minutes void, to name a few.

What to expect from life without Kawhi

With Kawhi Leonard out for 3-4 weeks with a fractured hand injury, here's how his injury, as well as those to Danny Green and Splitter, will affect the Spurs moving forward, and who can step up to help the team stay afloat for the next few weeks.

Spurs rout Hawks in a battle of injured squads

Whenever the Spurs have a bad loss or suffer an injury, nobody in the league wants to hear any excuses or feel the slightest bit of sorry for them, because of all the success the franchise has enjoyed the past, oh, 25 years.

In the month of January, San Antonio's rotation (and more specifically, the starting lineup) has been decimated by injury. Tiago Splitter was shown to have a right shoulder sprain on January 5, with an estimated timeline for his return of three to five weeks, while both Danny Green and Kawhi Leonard suffered significant damage to their hands (left and right, respectively) over the past two weeks. To recap, that qualifies as three-fifths of the Spurs' solidified starting unit, and that unit is a three-headed monster that has stifled opposing offenses and registered a defensive rating of 91.7 through 27 games played together. On the surface, this San Antonio squad can feel harshly dealt with in the health department, robbed of a chance to blend together the chess pieces of their roster, and forced to endure multiple weeks without the above players. It's undoubtedly a cruel blow to the regular-season campaign and an unfortunate interruption to the cause of getting more reps for the Green-Leonard duo (my pre-injury thoughts/untimely jinx on Kawhi are here.)

To what extent should Silver and Black fans fear long-term effects from these recent injuries? Well, courtesy of Jeff Stotts' genius and his tremendously detailed as well as incredibly comprehensive NBA injury blog and database, InStreetClothes.com -- I highly recommend you bookmark his blog and follow Jeff on Twitter @RotowireATC -- there is an abundance of information to address (and subdue) any such trepidation. The extensive catalog of injury breakdowns available on the site (see a discussion of Kawhi's fractured fourth metacarpal here) deliver a well-rounded perspective and insight into the otherwise unwanted news. InStreetClothes compiles summaries of total games missed, compares current injuries to similar injuries within the league in recent seasons, and uniquely assembles the sum financial cost of games missed for each and every NBA team. With this, when assessing the Spurs' fortunes, some interesting conclusions can be drawn.

As of January 24 -- an approximate halfway mark in the NBA season -- the Spurs had conceded the fourth-fewest games lost due to injury (33), at a financial expense of more than $2.8M. Of course, being just days after reports of the nature of Kawhi Leonard's injury were released, and still in the midst of Green and Splitter's extended absences, that number is certain to rise. Nevertheless, the data suggests that over the last half-decade San Antonio has fared quite well with player health problems.

Even with a notoriously aging roster, the Spurs have conceded a total of only 506 games to injury over the past five seasons, and they have boasted a below-league-average number of games missed in each of those five years, according to InStreetClothes. As Stotts details, some 90 of those games can be attributed to Manu Ginobili's fading health, and Manu's troubles have "accounted for 39 percent of the total money lost to injuries during the examined timeframe." The following figure helps to illustrate just how well the Spurs have fared over the past several seasons in terms of health: 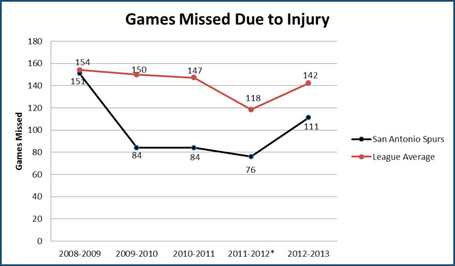 The losses of Splitter, Green, and Leonard are significant setbacks. The temporary loss of these players has resulted in some curiously creative and on-the-fly lineup experimentation, yet with this team's medical history and the fact that it is indeed still January, the cause for alarm and distress is minimal.

Losing players of this caliber from the active roster can result in some interesting lineups like we saw this past Saturday during the Spurs' rout of Atlanta. Against the Hawks the Spurs started Parker, Joseph, Belinelli, Duncan, and Ayres, who prior to the game, had made an appearance in one game together all season long. The following game, the Spurs put forth another interesting starting group, replacing Ayres with Boris Diaw, in addition to allocating nearly 10 minutes (albeit in a blowout situation) to recent ten-day-contract signee Othyus Jeffers. These unconventional combinations are not an altogether negative outcome of losing the defensive-minded starting threesome. Moreover, following on from the theme of InStreetClothes, the advantages of the team's traditionally clean bill of health are multi-faceted, diverse, and cost-effective.

A quick scan of San Antonio's cap sheet makes it easy to see how the organization has been able to restrict the existence of clogging, albatross salaries -- something that becomes even more prudent when dealing with medium-to-long-term sideline stints. Sustained, sound player personnel investment from PATFO, respected and deliberate strategizing from longtime Head Athletic Trainer Will Sevening, and a dash of luck here and there have helped to fashion the organization's apparent ability to avoid burdensome, sunk costs. For example, the combined annual salaries of the three injured Spurs in question for 2013-14 is approximately $15.7M  (per Sham Sports). In contrast to this, the league-leader in the financial cost of injuries for any one team is the Los Angeles Lakers, who have carried an expense of more than $19.6M due to 133 lost games (as at Jan. 24). The unenviable baggage of heavily-salaried, unavailable players is yet another example of the hefty cost of egregious front-office decision making.

Thankfully for the Spurs, it's highly unlikely that the three missing starters will register such an astronomical total of games missed, particularly with the imminent and sure-to-be-welcomed All-Star break, which will neatly pad the upcoming stretch of games for the entire roster, and not simply those on the inactive list.

The schedule, though, is clouded by the annual "Rodeo Road Trip," which figures to be slightly more testing and arduous than in previous seasons. With knowledge of the intricacies of the injuries, comparable stretches in street clothes from around the Association, and an inherent awareness of the strength of the approaching road-heavy schedule, it is important not to get swept up in the momentum of short-sighted narratives and mis-truths. Ten of the next twelve games will be played away from the Alamo City, many without the team's starting wings or starting center. As such, there's a need for expectations to be adjusted accordingly.

With Danny Green given a four-week recovery estimate on January 12, Tiago Splitter the aforementioned three-to-five weeks from January 5, and Paul Pierce and Anthony Davis missing four and seven games respectively with similar (but not identical) metacarpal ailments to Kawhi Leonard, pencil in San Antonio's three-game window against sub-.500 Eastern Conference teams between February 8 and 12 as a setting where normality could be restored. The All-Star break arrives immediately following that stretch and, according to the available information, so might the elusive, elite starting unit.

As detailed, all injury data and comparative analysis was accessed via Jeff Stotts' InStreetClothes.com.