The Spurs' defensive weakness continues to be contesting jumpers

The Spurs defense has improved dramatically over the past couple of years, but it still has one weakness that will likely never be resolved.

Share All sharing options for: The Spurs' defensive weakness continues to be contesting jumpers

The Spurs were defeated by the Trail Blazers and I doubt anyone is really surprised. After all, Portland has had the Spurs' number for the last few years and only part of that can be attributed to the schedule that often has the Spurs playing SEGABABAs in the Rose City. Similarly, there have been teams and players that have presented unexpected challenges for the Spurs defense to contain. It might seem random when a team seems to play over their head against the Spurs but there is an explanation.

Long-time readers probably already know where I'm going with this, as I've mentioned it a few times before: the Spurs are not able - or simply refuse - to defend mid-range jumpers, and very often only contest softly on off-the-dribble threes. It makes absolute sense on a macro level, as mid-range jumpers are the least efficient shots possible thanks to the combination of low field-goal percentage and lack of fouls drawn while pull-up threes are simply hard to hit. If the price to pay for a defense that is good at defending at the rim and spot-ups outside the arc is to concede jumpers, then it's totally worth it. But in individual games or even a playoff series, it can work against you.

Why the Blazers present trouble for the Spurs D

Let's go back to the Blazers game. There's been a lot of roster turnover over the years in Portland for reasons too sad to mention, but one constant has been LaMarcus Aldridge, one of the best mid-range shooters in the league.

This is LMA's shot chart from Saturday's night game: 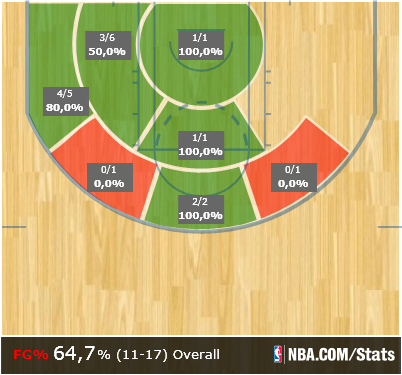 He only took one shot at the rim but killed the Spurs from outside.

This is the Blazers as a team: 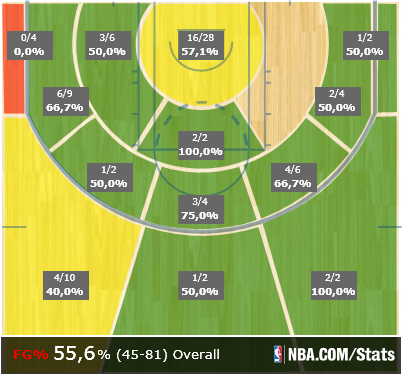 You can see the Blazers were scorching from pretty much everywhere, but particularly from mid-range. They had 40 points coming from the in-between area on only 32 shots. That's 1.25 points per shot, which is pretty efficient and helps make up for a below-average night in both shot attempts and field-goal percentage from close to the rim.

You may also notice that on a night in which the Blazers were firing from outside at will, they only took six corner three pointers. That is not a coincidence, as the Spurs make it a point to prevent that shot. Stopping the corner three-pointer is one of the keys to good defense, as illustrated by the fact that last season the three teams that allowed the least amount of shots from there were the Bulls, Pacers and Grizzlies - three elite defensive teams. Once again it has to do with percentages: the corner three yields more points per shot than other three pointers, so offenses work for them and defenses try to discourage them. You can live with an above-the-break three, as teams shoot it 2.3% worst than ones of the corner variety.

And yet going against everything we know about shot selection and efficiency, the Blazers achieved a 120.4 offensive rating without shooting particularly well close to the rim and from the corners. Going to the line a lot definitely helped, but what tipped the scales was the fact that Portland was converting shots the Spurs want teams to take. The problem is, those are also the shots the Blazers are good at making.

The Spurs defense is aimed at preventing efficient shots, not contesting typically inefficient ones

If I had to compile a list of players that seemingly torch the Spurs, I'd probably start with Dirk Nowitzki. The Big German has always been a tough cover for the Spurs while mostly doing his damage with his usual array of outside shots. Shooting bigs of all qualities have always caused trouble for the Spurs, so it's not a coincidence Aldridge and other guys like David West and Serge Ibaka have always been a thorn in their side. As for guards, the Spurs usually do a good job containing guys like Chris Paul and Russell Westbrook but Klay Thompson and Stephen Curry were a big problem in last year's playoffs, mostly pulling up off the dribble for threes with time in the shot clock.

The always-great Hickory High developed an Expected Points per Shot stat. Average expected points per shot is an estimate of the points a player should get according to league averages in the spot in which he takes those shots. When cross-matched with actual points per shots, we can see who converts shots at a higher level than their shot selection would suggest. You should read their explanation on it for more details.

Here is how those guys rank in chart form: 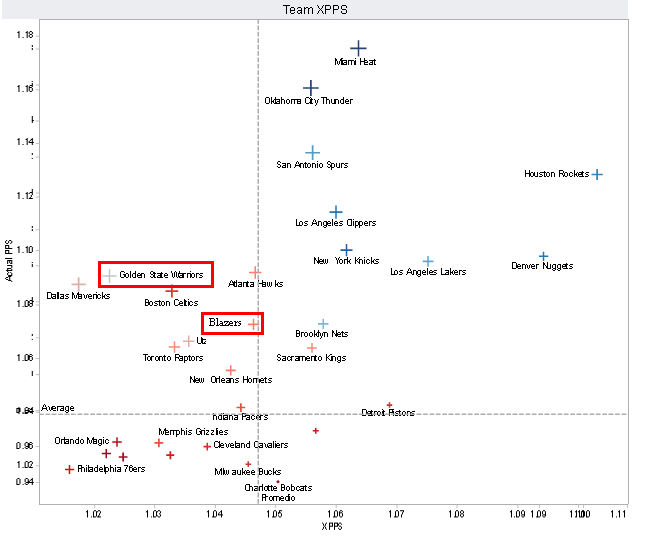 Both teams score more actual points than the type of shots they take would suggest. The Warriors scored a very similar mark on actual points per shots than the Nuggets despite taking lower-percentage shots. No wonder they took a couple of games from the Spurs in the conference semis.

The Spurs, for their part, actually allowed more points than the type of shot their opponent's took would suggest while the Thunder, for example, did a great job of contesting and making teams miss on higher-quality looks:: 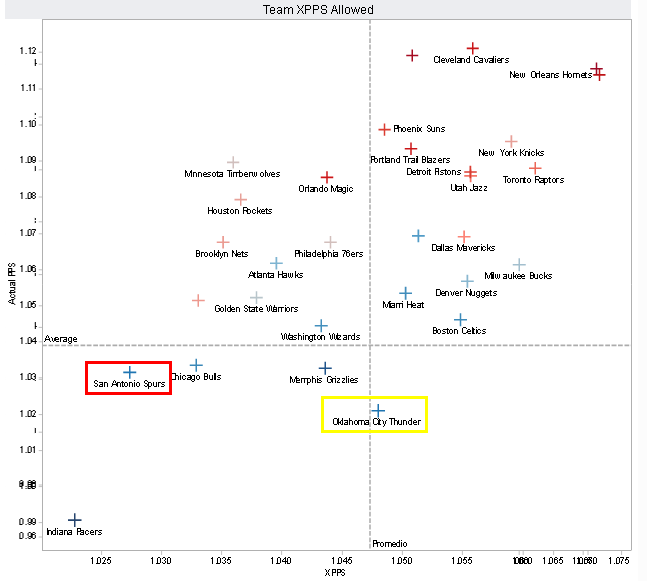 The main reason the Spurs had a great defense last year is because they forced teams to take tough shots. But the Warriors and Blazers, as well as individual players from other teams, can make tough shots at a high enough level to actually make the Spurs' sound plan start working against them. If the key to the Spurs' defensive renaissance comes from systematically trying to limit the opponent's most efficient scoring options, then it's not strange that teams and players who thrive on scoring via typically inefficient shots have success against them.

Fortunately, offenses that depend on that type of uncommon shot-making from outside are less reliable. Just like they can absolutely kill a better team like the Spurs in one game, they usually struggle finding alternatives when the shots don't fall - and even if you are great at them, outside shots sometimes just don't go in.

The Spurs should be expected to continue defending like they do now, while trying to add a few wrinkles for dealing with hot outside shooting. More drastic changes could actually backfire, as adapting to contain the handful of teams that can hurt them with this strategy could result in lowering their chances against most of the contenders -- just don't be surprised when teams that can hit from outside occasionally get hot and torch the Spurs.

Every design has a flaw and this is the chink in the Spurs' defensive armor.

Stats via NBA.com/Stats and Hickory High