Hey guys! So, I've been a lurker for a while now (and a Spurs fan for about a decade or so), but decided to make a post. I read a comment a while back where someone was wondering if how a team uses their cap space has an effect on success in the NBA. I couldn't find the original comment, or for the life of me remember who asked it, so if it was you who asked that question, feel free to take credit here. It was a while ago, and I would have done this earlier but between my current job, looking for a better job, fixing my car, and the randomness that comes with life, I've been a little busy. And I really wanted to go skiing a few weekends.

Anyway, the question was more about distribution of cap space, or the "super team" approach. With a limited amount of money to use, is it better to focus on a few elite players, or is it better to spread it out to have more depth? I have done similar research on the NFL, but thought it would be fun to see how the NBA works. I got my degree in statistics last year so I enjoy doing this kind of stuff, but I promise I won't be too confusing. And this post isn't necessarily about the Spurs themselves, I figured I'd post it here since that's where the question came from.

To answer that question I took contract information from spotrac.com. They only gave cap information for free for the past three seasons, but I decided to use the two seasons that are finished (the 2018-2019 and 2019-2020 seasons). To help make my analysis easier I only looked at 13 players on each team, since that was the minimum number each team had signed. Since I'm looking at two years I might mention later how a team paid four players X amount, but in reality it might just be two players counted twice. The cap info I'll be sharing is a players cap hit for one year, not the total value of their contract.

As with any study there are limits. The biggest here is injuries. Teams still have to pay them and it isn't like you can sign a star player as soon as your other star player goes down for the year. I thought about whether to exclude injured players (like John Wall or Kevin Durant from last year), but it gets difficult to really evaluate the impact of their absence, so I included them. Also, it isn't like injuries are a rare occurrence. The other limit is that players aren't always paid exactly what they're worth, often being over or underpaid. I'm not the best expert with basketball so I won't address this much.

Anyway, now onto actual research! The first step I took was to create a boxplot showing the distribution of cap usage for each team from 2018-2020.

This is kind of interesting to look at, but not much can be made from it yet. However, looking at the data frame I noticed that there were a few teams who weren't spending much at all and then I remembered that tanking is a thing. To sort this out, I noticed that every playoff team had at least one player making $18.5 million. I decided that a team was considered 'competitive' if they had at least one player making that much, which only ruled out three teams. But, when you look at the number of players making that much on each team and compare that to the number of playoff games they won, there is a trend. The teams with one or no players making $18.5 million had very little success in the playoffs, while teams with multiple players above that cap amount had a higher ceiling of success.

**Note: I found that using Playoff Games won was a better measure of success than regular season winning, or even playoff appearance. For my statistical friends, doing linear regression with cap usage as the predictor and the response as either regular season wins, playoff appearance, or playoff wins, total playoff wins had the lowest p-value (0.034) and highest coefficient (0.587).

Here I did another boxplot, but only including players making at least $18.5 million. 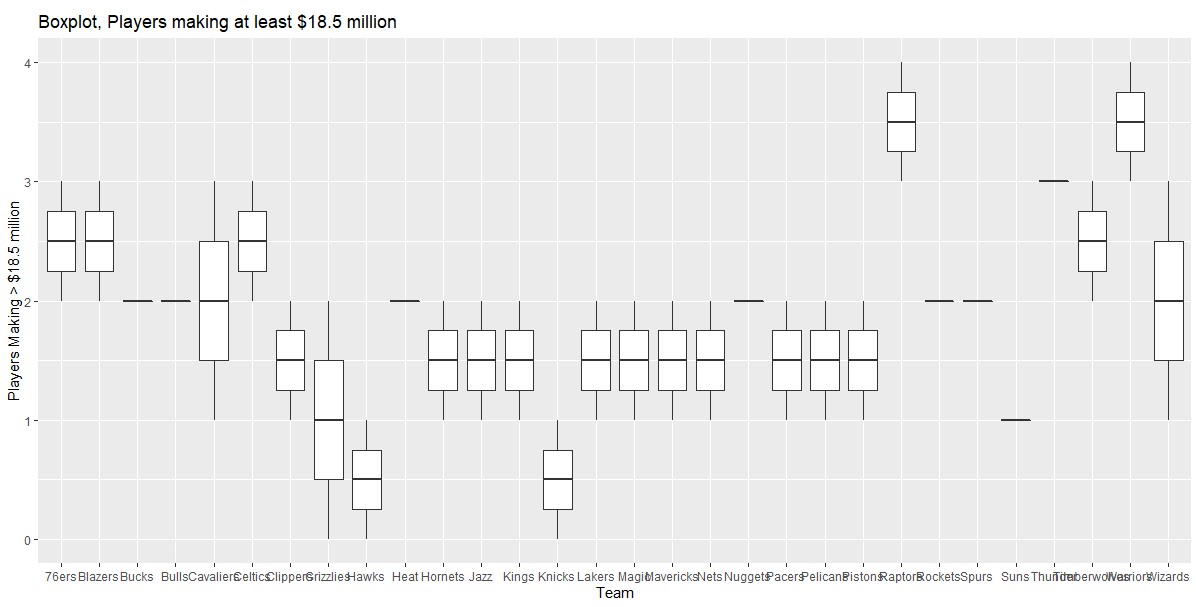 So now we have some evidence that teams aren't distributing their cap space equally when they are trying to win. If they were all spending the same then there wouldn't be much to analyze.

I figured the next step was to sort players' salaries by different categories. I made six of those, based on their salary range (the key in the next plot gives specific ranges). I then plotted those to compare the number of players in each category to playoff games won. It isn't what you would expect: 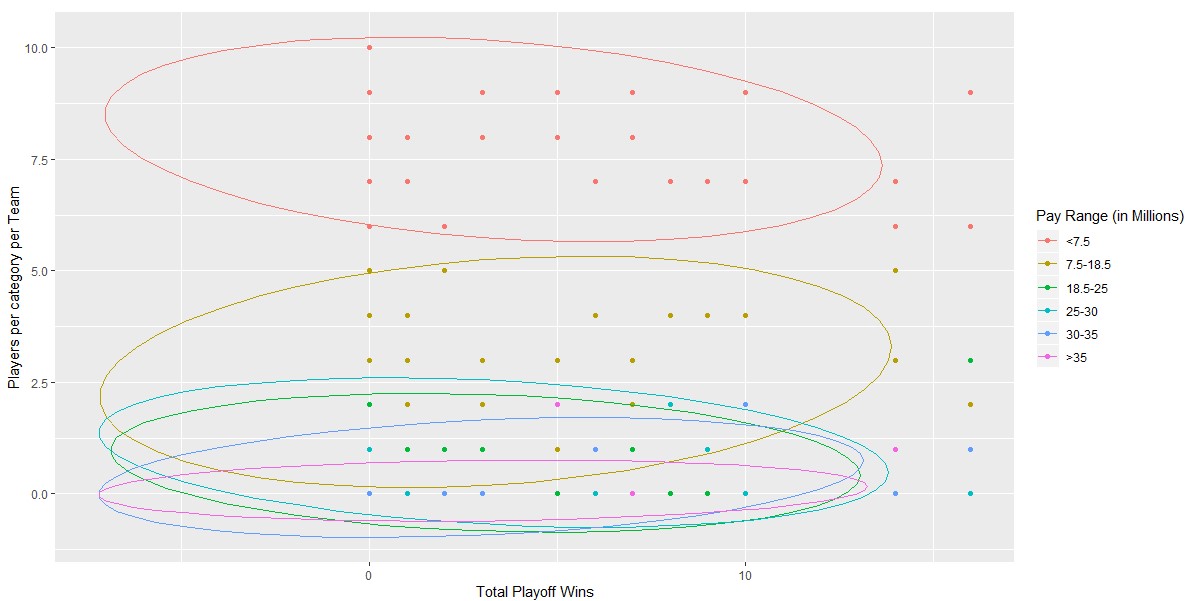 I though maybe I was too specific with those pay ranges, so I grouped them into three categories instead of six. It didn't help. 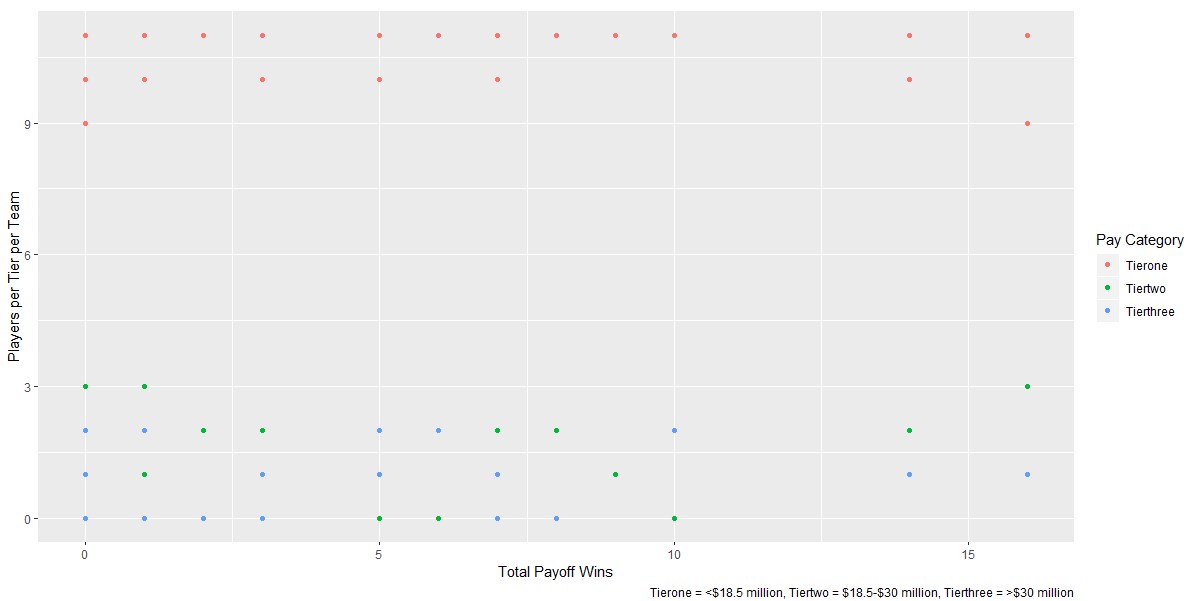 Again, if that theory of having more high paid players is true, we would expect clusters in the top left and bottom right. Instead it's spread all over. I played around with changing the range of those categories but the story stayed the same. Ultimately the pay of of players was all over the place, meaning I couldn't find any group that could be large enough. Basically I was looking to check the difference between having 2 or 3 players in a category. If that difference was larger, such as having 5 players in a specific pay range while others had 0, then maybe we could get somewhere. However, there was so much variation in success that it wouldn't help much.

There were 20 teams in the past two seasons that didn't spend more than $30 million on any one player, and their success was all over. Some were swept in the first round while others made it to the conference finals. You had the same variation of success among teams that did have players making over $30 million. The Rockets tied for most players over that $30 million dollar range but that hasn't even gotten them to the Finals (the Warriors are the other team, if you were curious).

To sum it all up, there are players making quite a bit of money, but that hasn't guaranteed anything. You probably are wondering how this is, when The Warriors, Raptors, and Lakers all had some highly players and have won the last three championships. But remember the other side of the spectrum. You have teams like the Thunder in 2018-2019, who had three players collectively making over $90 million and lost in the first round in five games. Or the 76ers last season, who were swept in the first round despite also having three players making $90 million. And I mentioned the Rockets in the previous paragraph.

The takeaway isn't that spending is worthless, nothing here suggests that, but that being smart about your money is what matters. I mentioned earlier that how well a contract's value matches a players value limits this, and it would be interesting if you could redo this analysis taking that into account. If you did that, maybe you could make some solid predictions.