Getting caught up in the "Popovich for President" movement

The candidate no one expected. The political cause that caught the pundits unawares. Ladies and gentlemen, the next president of the United States...

Share All sharing options for: Getting caught up in the "Popovich for President" movement

One year, five months and eleven days ago, I was sitting at home on a Friday evening, minding my own business. I wasn't expecting to begin a movement or get into politics in a big way. I was just sitting at home after a long day at work when someone messaged me on Twitter, and the rest is history.

I'm not one to retell a tale you surely know, but when the Wall Street Journal publishes a story about the genesis of Gregg Popovich's path to becoming the presidential front-runner, then I think it's only fair for me to have my own say.

First I should admit that while I've been running this blog for 6 seasons, I'm pretty much a political neophyte. Sure, I follow the big stories like any concerned citizen does, but most of the daily reading I do concerns the Spurs. When someone mentions Washington, I think about the Wizards, not the Beltway.

But all that changed on September 12th, 2014, when I first wrote about that fateful "Gregg Popovich next President" bumper sticker and launched the now-iconic Popovich for President T-shirt. At the time, I wondered about what he would "do if his country called? How would he respond to an overwhelming, grass roots movement?" And the last seventeen months have given us the answer.

I was always optimistic about how Pop would react. (Yes, I know it's not the most respectful way to refer to him, but humor me in these last few short months. I promise I'll call him Mr. President without fail once he's sworn in.) But I had no idea just how well he'd handle the challenge, nor how the public would welcome and support him.

But as I'm sure he'd tell you, the work is far from over. There's still the rest of the primaries to navigate, and of course the general election in November, but unless something unexpected and disastrous happens, the election is 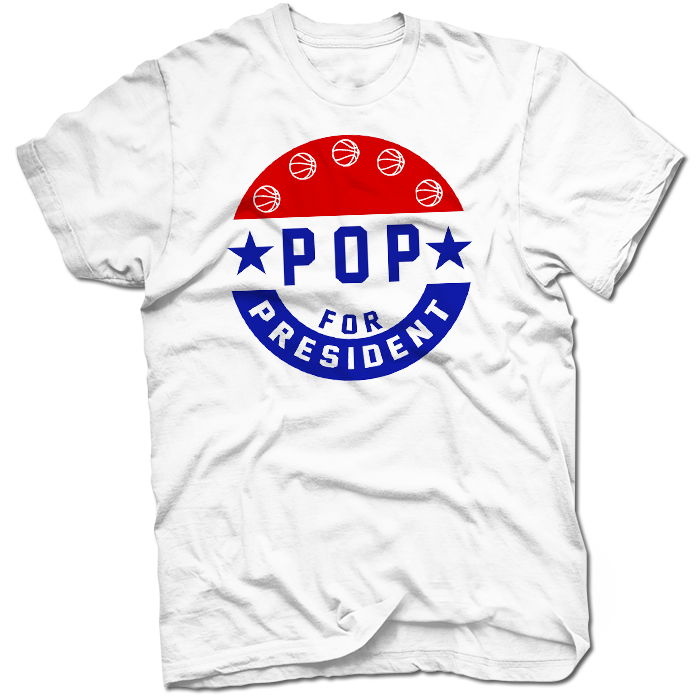 his to lose. Even those who support his few remaining opponents admit to that.

And so it is with a feeling of nostalgia that I humbly present for you once more, the Popovich for President T-shirt, by BreakingT which is for sale once more.

Just like all the rest of their shirts, it's that difficult-to-attain combination of incredibly soft and yet crazy durable. If you're between sizes go with the larger of the two. In the interest of full disclosure, and I've said before, a portion of the profits come to me, which is one of the reasons Mrs. Wilco lets me spend so much time making PtR as good as it is.

The reason I'm launching the shirt again is because BreakingT has received so many requests from people wanting to buy it. They asked me to put up another post so they could take care of those who missed it last time, or wanted to buy some more.

Finally, I hope no one feels misled or faked-out by the angle I took with this article. I just wanted to have some fun with the idea of Pop really running for office, and the article by the Wall Street Journal linking to my original post on the subject gave me the excuse I needed. As I've admitted before, I've engaged in a bit of Pop-worship in the past, and so it's hard to resist when a CIA Pop moment is begging to be relished. Thanks for bearing with me.