Don't blame me, I voted for Manu. - Gary A. Vasquez-USA TODAY Sports

It’s been nearly two weeks since the presidential election and I’m still trying to sort out my emotions. I’ve felt at times angry, scared, disappointed, defiant, cynical, nihilistic and even confused.

It reminded me of the alienation I experience every year during March Madness.

This? Half of you are entertained by this? Really?

I voted, fully aware how pointless it was since I live in largely "blue" state. I imagine most Spurs fans feel the same about the validity of their votes. But my experience in the booth was interesting in retrospect because of what I happened to witness to my right. An elderly woman required some assistance with her automated ballot. She informed the technician that she intended to vote for Donald Trump but that she wanted to make sure to leave her ballot blank for the state senator election. Both of the candidates were Democrats, she explained, adding "I’ve never voted for a Democrat in my life."

I didn’t think much of it at the time, but perhaps it was instructive of what was to come. Through all the muck and ugliness of this election cycle, no matter how much the candidates tried to drag each other through the mud, the millions upon millions spent campaigning, the endless cable news reports and countless Facebook memes, how many minds were changed, really? How many eligible voters crossed party lines at the end of the day? A minuscule amount, relatively speaking.

I’m discussing the election in this forum, a Spurs blog, because Gregg Popovich has been quite outspoken about the result.

I’m still sick to my stomach. Not basically because the Republicans won or anything but the disgusting tenor and tone and all the comments that have been xenophobic, homophobic, racist, misogynistic.

And I live in that country where half the people ignored all of that to elect someone. That’s the scariest part for me. It’s got nothing to do with the environment, Obamacare, and all the other stuff. We live in a country that ignored all of those values that we would hold our kids accountable for. They’d be grounded for years if they acted and said the things that have been said by Donald Trump in that campaign. I look at the evangelicals and wonder, ‘those values don’t mean anything to them?’

While I largely agree with Pop’s sentiments, I think there was some emotion and bias behind them, not too unlike asking a coach to offer his thoughts on the officiating seconds after a controversial no-call in a playoff game. He is being largely presumptive that the the core values he holds, the ones he would punish his children for violating, are ones shared by everyone in the country. People don’t just suddenly become racist or homophobic out of nowhere. Those are learned behaviors and children are products of their households and their environments. Popovich’s life experience has been far different than the norm.

As Pop explained in a story about his "woke-ness" for The Undefeated, he grew up in East Chicago, Illinois, in an integrated community of whites, blacks and Eastern European immigrants who all worked alongside one another at the steel mill. From there he joined the military, the most integrated, multicultural institution we have as a country, and used that experience to see and experience the world. Then he coached basketball at a liberal arts college in California, apprenticed for Larry Brown’s big-time program at Kansas and then followed him to the NBA.

Through the Air Force and basketball, Pop’s whole life experience has been about inclusion, bringing people from different backgrounds together for a common goal and believing in meritocracy. Most of us aren’t fortunate enough to have that experience. And worse yet, most of those inclusive manufacturing jobs like a steel mill are long gone. Now we grow up systematically segregated and that opens the door for ignorance and fear. We have to push outward against those forces, see them for the boogeymen they are, recognize our commonalities and accept our differences with peace and empathy.

Did racism, sexism, xenophobia, homophobia all factor into Trump’s victory? Sure, they did. But all those evils existed four years ago and eight (and 4,000 and 8,000) and Barack Obama got elected all the same. Our country is growing more and more multi-ethnic every year. We bring in immigrants —legally— from every corner of the globe, our different cultures intermingle and we continue to be more and more supportive and accepting of those in the LGBTQ community and those of different faiths.

In short, it makes no logical or mathematical sense for us as a country to be more bigoted of "others" when there’s more of "them" than there is of the supposed majority with each passing year. Or maybe you didn’t notice that Hillary Clinton garnered 1.4 million more votes than Trump. We’re not making more bigots than ever. It’s just the ones that have lived among us, hiding in plain sight, have been more emboldened in the age of social media. There are forums and avenues now for the anger and hatred, behind the relative anonymity of a Tweet or a message board, no different than spray-painting hate-speech graffiti in the middle of the night. Social media gives everyone a voice, and unfortunately that includes the bullies, cowards and idiots. There is no written test or morality code one has to pass to use it. While social media helps bring with those common interests together, it also offers a disproportionate view of reality, much like the actual cable news media. The worst, most vile opinions get the most attention and the feelings of an attention-seeking few get falsely represented as those of a significant sample. If it bleeds, it leads, and if it hates, it rates.

Trump’s victory in the general election is all anyone wants to talk about, and certainly the stories in the aftermath about the folks he wants to appoint to important positions have been alarming, but to me the much more interesting story was his victory in the Republican primaries, because they were illustrative. He preyed on the populist social media crowd. He played to the cheap seats.

And that’s the other thing that I believe Pop got wrong about the election, telling Marc J. Spears of The Undefeated that Trump didn’t seem to have a defined purpose.

You could tell because he doesn’t seem to be really that interested in policy, or anything like that. I haven’t seen or heard from him any core values or principles. He’s got one big motivation, and that’s to win at whatever he does. But that’s not a core value, that’s not a principle, that’s not a vision.

To quote another famous coach, "Winning’s not everything, it’s the only thing."

No matter what I think of him as a person, I don’t blame Trump as a campaigner one bit. The object of a competition is to win and when the presidency’s at stake, the ends justify the means. For all the rhetoric and bluster, there really isn’t much tangible difference between any of the GOP candidates. They’re all tied to the conservative platform, no matter how they tried to differentiate themselves from one another to a skeptical public. It could’ve been Trump, Jeb Bush, Marco Rubio, Ted Cruz, John Kasich, whomever, but they were all going to cut taxes for the rich, appoint conservative judges to vacant Supreme Court seats, "Protect the 2nd Amendment" and so on.

Think of them like basketball coaches. They all have the same plays. Like Popovich is fond of saying, he’s not going to stop Kevin Durant and Stephen Curry by inventing some new pick-and-roll coverage that no one’s ever seen before. Why Trump beat all those other folks is because he was the most charismatic, by far. He wasn’t a plate of mayonnaise in a navy suit. He wasn’t a lump of mashed potatoes like Mitt Romney. He was the only candidate out there who treated the election less like gentlemanly debate than a competition to be fought and won. He made bold promises, used headline-grabbing (and historically ominous) propaganda and delighted in going below the belt again and again.

He played to his audience, and much like Skip Bayless, Stephen A. Smith, Colin Cowherd, Jim Rome, Rush Limbaugh or Howard Stern, he at least knew who his audience was. Those broadcasters get paid millions because they treat society for the teeming, dirty gladiator arena it is, not the effete, elite "senate of the republic" politicians pretend they’re addressing in public so as to not appear they’re talking down to anyone. Trump treated it all as a reality show, and we all ate it up.

Once he won the primaries and there was only one adversary left to beat, Trump changed tactics. He knew the people who voted Republican their whole lives like that old lady in the booth next to me —or the Spurs’ owner— would support him no matter what. It wasn’t about gaining voters anymore. He knew that wasn’t going to happen. It was about making people disgusted and distrustful of the whole process to tune out the election altogether, alleging that it was "rigged" anyway. A vote for Harambe was as good as a vote for him. His whole strategy was to discredit Clinton’s credibility and he chipped away at her just enough, while Clinton herself could do nothing to make herself appear more trustworthy and likable, even to women.

I took the liberty of tallying up the votes, rounding off to the tenth of a million, for the ten most important states in the last three elections. The ones in bold were won by Republicans. 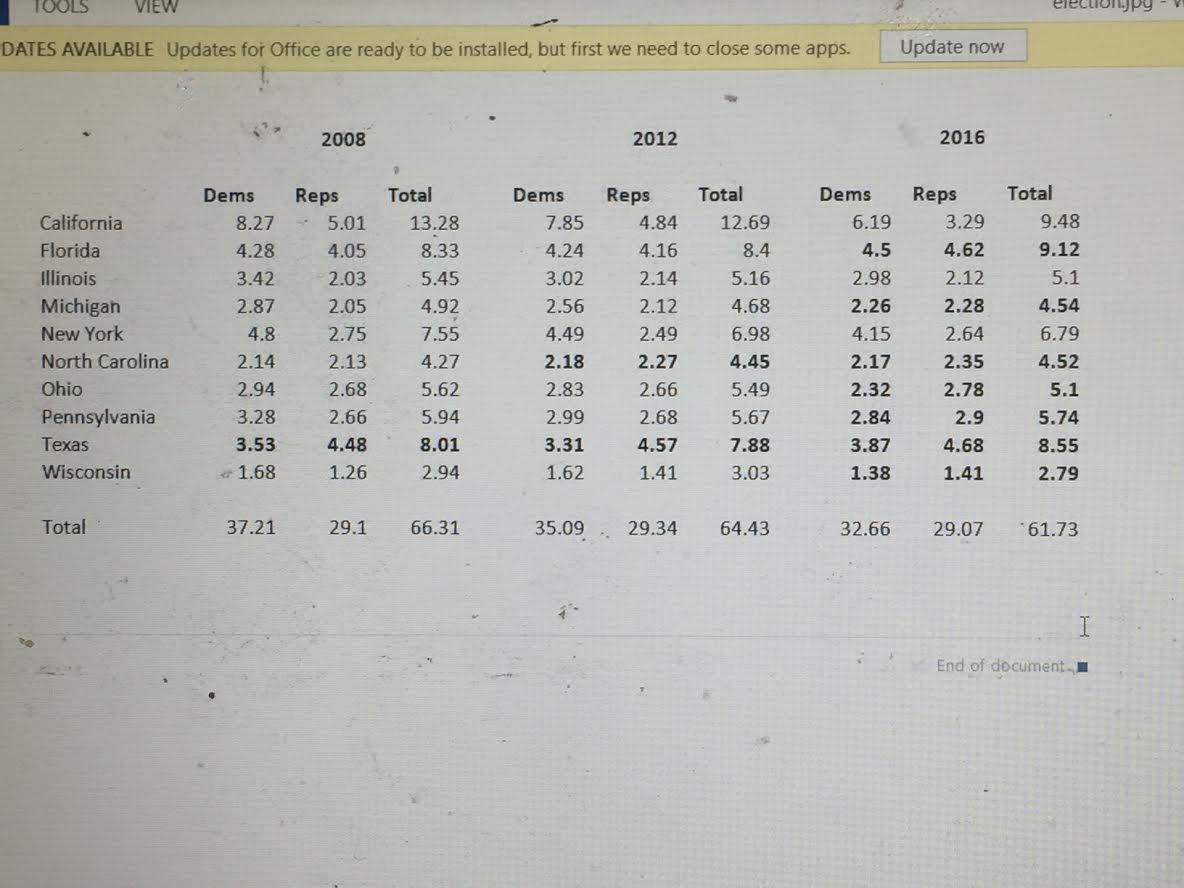 As you can see, Clinton lost more voters than Trump gained, and Republican turnout overall has stayed pretty consistent. In the key "battleground" states, Trump marginally outperformed Romney, by approximately 360,000 people in Florida, 210,000 in Pennsylvania, 160,000 in Michigan, 120,000 in Ohio and not at all in Wisconsin. However in all those states, except Florida, it came down to the voters who didn’t show up for Clinton. She lost about 2.5 million voters from Obama four years ago in these states and nearly 5 million from 2008.

If there’s one takeaway we can glean from this, presidential elections are not about the policies, just like coaching isn’t about the X’s and O’s. There are hundreds if not thousands of coaches around the world who can competently diagram plays and conduct practice drills. Precious few of them can command the attention, respect and effort of jaded, seasoned, multi-millionaire professional athletes. Similarly, I don’t have to tell you there are far too many politicians in the world of all stripes, and they all think they’ve got the answers. But how many of them can truly inspire? How many are ambitious enough to say and do anything to be the leader of the free world? The democrats didn’t learn the lesson of Al Gore and John Kerry. You’re not going to win this thing if you think and carry yourself like you’re the smartest person in the room. You’ve got to either be cool or vicious. Or preferably both.

Pop might have been disgusted by the results of the election, but as loathe as he would be to admit it, he’s got a few things in common with the president-elect beyond them both being "rich white guys." They’re both powerful, they both know how to command a room and they’re both competitive as all hell.