A portrait of Danny Green

The eleventh in a series of profiles on each member of the 2013-2014 San Antonio Spurs.

Share All sharing options for: A portrait of Danny Green

The knock on Danny Green when he first joined the Spurs was that he acted better than he was. It turns out he was right all along. 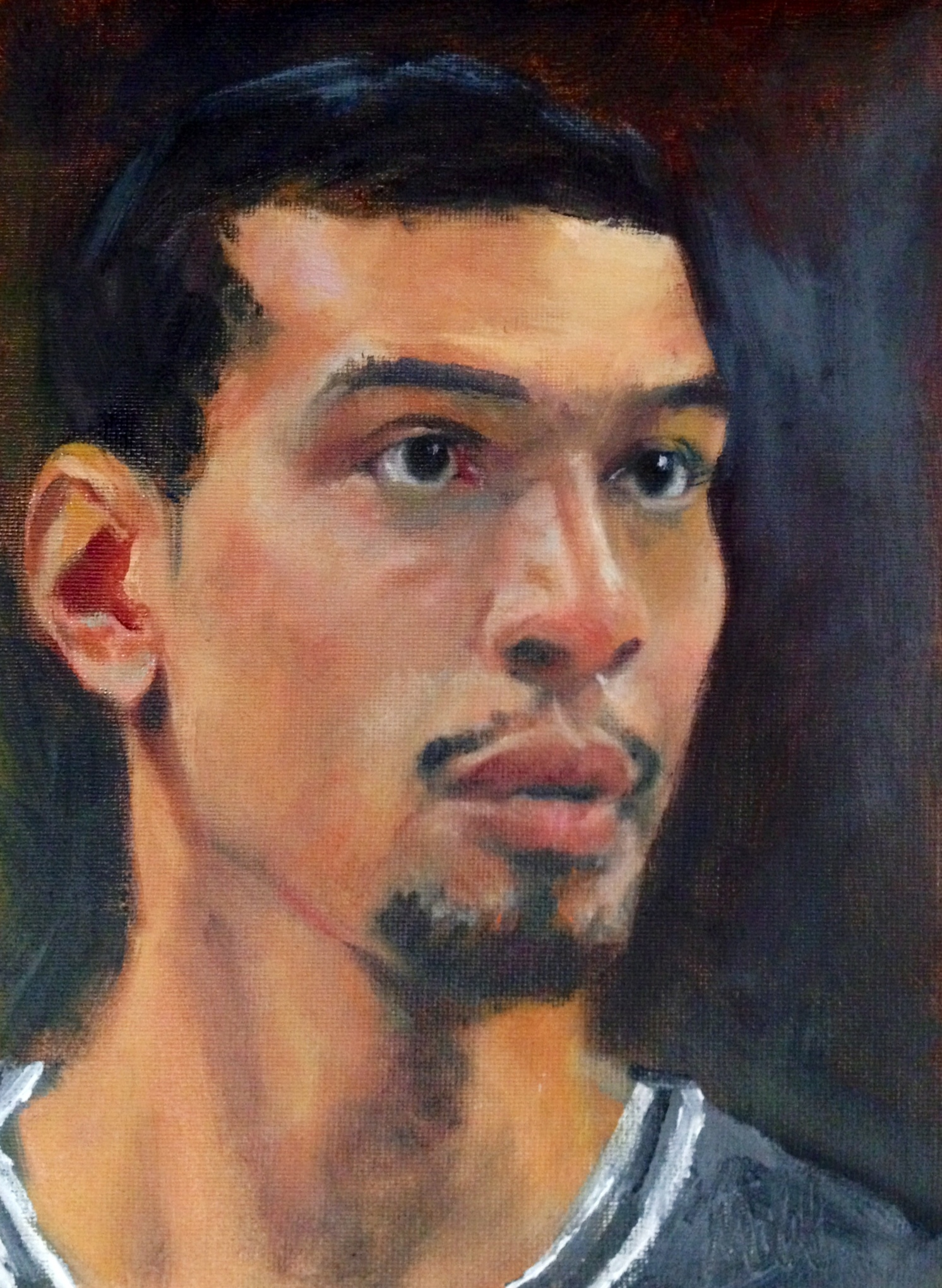 Of all the fairy-tale redemption stories the 2013-14 San Antonio Spurs achieved, my favorite -- even more than Manu Ginobili or Tiago Splitter -- has to be Danny Green, even though it's a narrative that isn't all that well-known or recognized outside of our little corner of the world. This video represents the beautiful end of the story, but to appreciate it, you need context.

What Green accomplished this past season is downright inspiring, a tale of personal triumph in the face of repeated adversity that could provide ample material for its own book. You see, while Spurs coach Gregg Popovich has a reputation for treating each man on the roster the same from Tim Duncan all the way on down to Aron Baynes, it's not entirely accurate. Sure, he rips into all of them for mental mistakes or a lack of focus or intensity, but those flareups are brief, spontaneous, and quickly forgotten.

With Green, it's been something else entirely. For the length of his Spurs career he's been Pop's personal, proverbial "whipping boy," always baring the most brutish of Pop's unrelenting "tough coaching." Most of it has been out of necessity. Popovich, a grandmaster at reading people, quickly judged that Green was one who not only needed to be constantly pushed and prodded to keep his edge, but more importantly, that he had the temperament and disposition to stand up to it, like Tony Parker in a sense.

The difference is with Parker, Pop tore into him for a myriad of reasons, none of which had to do with his talent. As the point guard Parker would be the chief ball-handler and decision-maker, so it was critical for him to be in sync with what Pop wanted and for him to understand the game on that level as early as possible. It's easy to forget now because he's been a Spur seemingly since the George Gervin days, but Parker joined the team as a 19-year-old from Paris. Pop needed his prodigy to dispel stereotypes about youngsters and Europeans. He needed Parker to prove to him and to the rest of the world that he was tough enough to do what was necessary.

The molding of Green is something else entirely. A second-round pick by the Cavs in 2009 out of North Carolina, he played an anonymous 115 minutes for Cleveland in the '09-10 season, recognized by fans solely for his pregame dance routines with LeBron James. The Cavs got rid of him after James bailed to Miami and Green had to join the D-League to get noticed again. The Spurs signed him twice and cut him twice. Reportedly, the coaching staff wasn't enamored with his attitude. Green didn't act like a Spur and certainly not like a D-Leaguer. He thought he was better than he was, that he was too good to hustle or play defense. After the second time the Spurs let him go, Green finally got the message, and subsequently left one of his own to Popovich's voicemail, promising to do whatever it took to stick, even pick up towels after practice, if they gave him a third chance.

Green did indeed make good on that opportunity, earning a cup of coffee with the 2010-11 Spurs and then making the roster for good during the lockout season. Manu Ginobili suffered a broken hand early in the campaign, opening the door for playing time for Green. Richard Jefferson continued to disappoint and before long the Spurs were giving the lion's share of the playing time on the wings to two youngsters in Green and Kawhi Leonard.

Still, Green was one who had to have his ego checked repeatedly, whenever he was feeling too big for his britches. His leash was the shortest of all, partly out of necessity. Subconsciously Pop had to find reasons to bench him, because he played the same position as Ginobili, a trusted agent. Moreso the tongue-lashings were given because Green was a D-Leaguer on merit.

It's always amusing to hear talking heads compare Leonard to former Spur Bruce Bowen when the better comp had been on the same roster all along. Leonard has size, length and most of all the kind of talent that Bowen couldn't dream of having. Green on the other hand is not an explosive, quick-twitch athlete. He's not coordinated enough to make layups consistently. Dribbling, to be kind, is an adventure. Perhaps no one in the NBA has air-balled more 10-foot floaters the past three seasons. To say that Green lacks typical NBA skills would be an understatement.

He's got good length for his position though, isn't shy about getting up into people defensively and rebounds well for his size. Oh, also, Green can really, really shoot it from distance and doesn't need to be told to let it fly when he has a crack of daylight. His release is high, quick and repeatable, the form consistent whether it's his first minute on the floor or his 35th.

Green's fatal flaw, even more than his lack of skills, is that his focus drifts. He loses track of assignments at times. His attention wanders. What should be routine plays go haywire. When Ginobili commits a turnover, it's usually one borne of ambition, trying to pass through a thicket of arms and legs to a teammate for a layup. When Parker gives it up, it's more often than not a selfish turnover, a travel or a throwaway where he's trying to sell a call. Green's turnovers can only be described as careless. Outlet passes in the backcourt to guards who don't have their heads turned. Dribbles up the floor where he lets trailers pick his pocket. Maddening plays that get him a quick hook and a scolding.

You're not good enough to take this stuff for granted even for a second, Danny.

With all that serving as a backdrop, imagine being the guy that cost the team the Finals. There's no point in linking to the fateful play in Game 6. You've all watched it a million times. You're all replaying it in your mind's eye as you're reading this. James misses a wing three down five with 23 seconds to go, Green leaks out to half-court, waiting for a home-run pass that'll never come, James is left wide open when the offensive rebound finds its way into the hands of Mike Miller who quickly shovels it to him for a three. And so on.

Ginobili received most of the blame for "losing" the Finals, for his eight turnovers in Game 6 and four fourth-quarter giveaways in Game 7. Popovich blamed Green for leaving James. He rode Green for that mistake all season long, similar to the way he never let Ginobili forget during the 2006-07 season his grave error in judgment for fouling Dirk Nowitzki for a late game-tying "and-1" layup in Game 7 of their second-round series loss to Dallas the season before.

It didn't matter that through five games that Green had made himself the front-runner for Finals MVP. It didn't matter that he'd already broken Ray Allen's record for most 3-pointers in a Finals series. All of that was forgotten. All that mattered was the mental lapse. Green took a rebound for granted and wanted to punctuate the Finals with a breakaway dunk. (Incidentally, few remember that Green, who shot a combined 2 of 19 in the final two games at Miami, was an unmitigated disaster in Game 7 from beginning to end, by far the worst player on either team.)

Watch the video up there again. Notice Tim Duncan and Ginobili pointing to Green when Popovich speaks of coaching the team hard, of being, in his words, "a horse's ass," all year. The leaders of the team knew immediately who Pop was the hardest on.

Green, who was so awful in those last two games at Miami in 2013, and who was a demon in Games 3 and 4 this time around, harassing Dwyane Wade and others to the point of making you almost feel sorry for them, who somehow converted six straight layups and floaters in that game as the Spurs raced out to a 25-point lead in Game 3, sheepishly trudges up to Pop when called out, as so many times before.

This time though, there are no profanities screamed at him or spittle flung indiscriminately in his direction. The moisture instead -- thankfully -- is the spray of champagne from all directions. The two men embrace at last, 2013 is ancient history.

The guy who first gained attention for his pregame strutting got to have a deserved last waltz with Pop.