It's time Tim Duncan finally had a real nickname

The #1 pick of the 1997 Draft has more in common with Frank Castle than just a comic book.

Share All sharing options for: It's time Tim Duncan finally had a real nickname

Like Terminators and tomatoes, sports nicknames comes in many varieties, good, bad and organic. Some are a simple play on a player's name (Earl "The Pearl" Monroe, Hakeem "The Dream" Olajuwon); others refer to an unavoidable physical trait (Wilt "The Stilt" Chamberlain, Nate "Tiny" Archibald, Robert "Tractor" Traylor); while others betray the faint whiff of marketing opportunism ("Air" Jordan.) The best nicknames provide a hint of the regard in which players are held by their peers, whether it be the inexplicable nature of their athletic ability despite some apparent limiting factor ("The Round Mound of Rebound" or "The Hick From French Lick") or simply the sheer joy and/or awe that comes from playing with or against them (Earvin "Magic" Johnson, Dominique "The Human Highlight Film" Wilkins.) A nickname may reflect character ("The Admiral"), characterization (Gary "The Glove" Payton, "The Jail Blazers"), and personality - or lack thereof (Kareem Abdul-Jabbar's blandly respectful "Captain.")

If the components of the last category represent the tributaries of a rather nondescript river, Tim Duncan's "The Big Fundamental" would sit at their confluence. Regardless of origin or intent, "TBF" is at best a sort of place holder for a better idea, and at worst lazily reductionist. Shortening "Fundamental" to "Fun" has become popular recently, at least among internet sports media, and while this is probably meant as a tongue-in-cheek complement, it further mocks the power that a truly good nickname possesses, in that it neither characterizes Duncan's game nor adequately represents his intensity as a competitor.

We could debate the beginning and end of the Golden Age of Nicknames for as long as we could debate which of them is the best, but to me the Age began around the time of "Pistol" Pete Maravich and died with the retirement of Karl "The Mailman" Malone, which, not coincidentally, closed out the the cumulative career of the '84-'85 draft classes. Since then, there have been a few notables ("The Answer", "The Truth", "Half-Man, Half-Amazing") but far more of the "First Initial+Last Initial+Uniform Number" pseudo-pseudonyms which seems to suit a #society such as ours.

A word of disclosure: What I'm about to suggest for Tim Duncan's new handle is not likely to move the needle much in terms of nicknames. While it's true that in a sports culture so desperate for good nicknames that it passionately debates the merits of "Slim Reaper" vs. "Durantula" for Kevin Durant (who continues to not only go by "KD" but express his preference for it), any name we conjure for the GOATPUFF will, almost by default, be better than the status quo "TD" and certainly be far more befitting than the Shaq-derived "TBF."

You don't look impressed. Why this name, you ask? Is it because of the comic book thing? Didn't I just label "Air Jordan" (a very good nickname by the way) nothing more than marketing? Sure. And The Punisher is marketing too. Look at it this way: If you, like me, work in any sort of professional realm, you probably have a business card with your name on it. If you have professional certification, you probably string out two or six or twelve letters behind your name. Isn't that right, Martin Van Nostrand, BS, MS, PhD, CHT, PE, DDS, LED, WKRP. MP3, XYZ? When it gets down to it, isn't that marketing yourself? Now imagine Tim Duncan's business card. It probably has The Punisher on it, doesn't it? Of course it does. 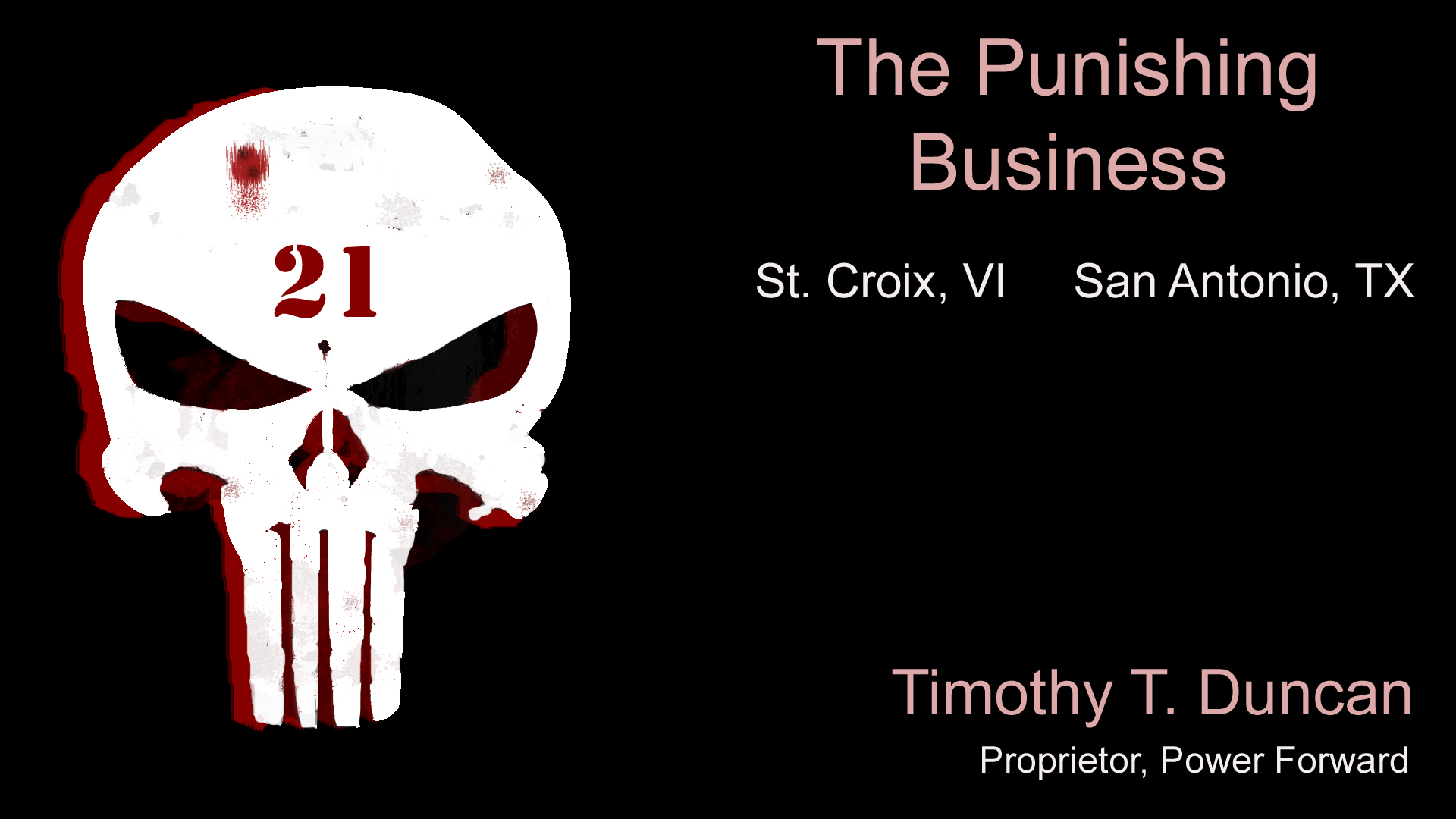 If that doesn't convince you, look at this list of similarities between Tim and The Punisher:

- Started off in a different line of work (Marines; swimming.)

In addition to all of that, let me allude to something I said a few paragraphs ago: "The Punisher" both describes Duncan's game and his personality as a competitor, which is expressionless, objective, analytical, relentless. Frank Castle goes about correcting matters of justice ignored or else perpetrated by the system. When Tim Duncan uses his perfect footwork to establish post position against Lamarcus Aldridge, or grabs a rebound over Serge Ibaka, or runs the floor quicker than DeMarcus Cousins, it's not just the wily tricks of a veteran; it's Tim meting out justice against those who lack the fundamentals and ignore the small things that win championships.

Like I said, calling Tim Duncan "The Punisher" isn't going to start any kind Nickname Revival in the NBA. It's merely apt, rather than earthshaking, and I'll be the first to admit that. One huge difference between Castle and Duncan is that one works alone, while the other is regarded as one of the greatest team players in basketball, the cornerstone of a group-first system that has produced the most successful sports franchise in the last twenty years. So I'm okay with this being a simple, quiet correction, just the administration of a fitting - if imperfect - handle which should have been bestowed long ago on the #1 pick of the 1997 NBA Draft. After all, Tim Duncan himself has never been revolutionary, for that word implies undue reliance upon emotion, anger, and being out of control. Tim has simply been a calm, unwavering actualization of an ideal.

As Frank Castle would say: "It's not vengeance, it's punishment."