Observations from the Spurs' Media Day

Friday was the Media Day at the Spurs practice facility. My first opportunity to cover an event in person after moving to San Antonio from San Francisco over the summer. How did it go? Who did the Spurs make available for interviews? Did I get Popped? Read on for the answers to all this and more.

Share All sharing options for: Observations from the Spurs' Media Day

The first person I recognized when I walked into the practice gym was Bill Land. He was taller than I had pictured him. The first Spur I saw up close was Jeff Ayres, who looked gigantic and was the first up to take pictures in various basketball "action shots," such as making a chest pass, executing a jab step or going up for a layup. 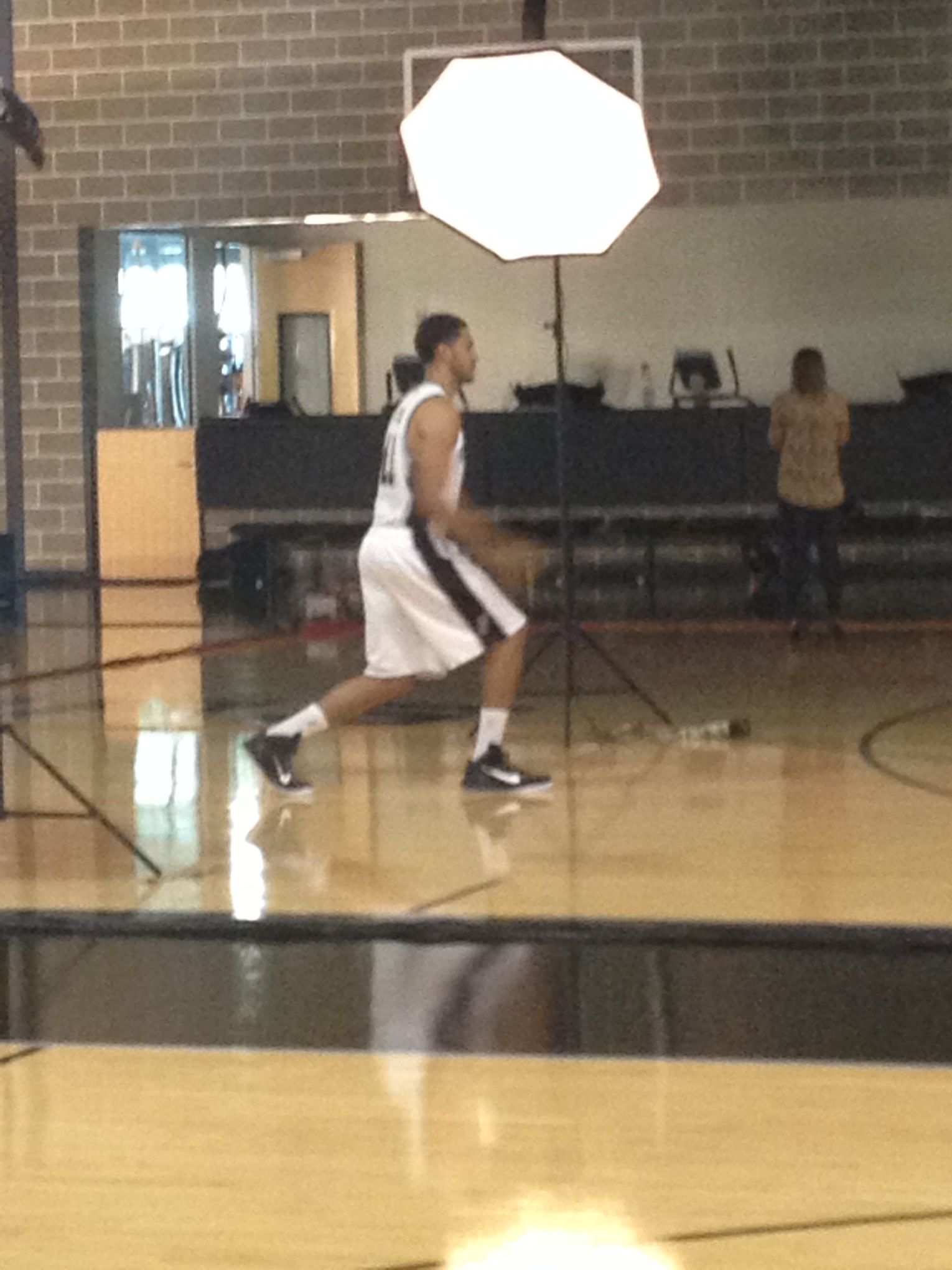 Shelley Smith from ESPN was there, along with Bruce Bowen. Neither of them participated in the interview scrums. They talked to players privately in a side room. Bowen still looks like he could play. He looked positively chiseled.

I recognized Mike Monroe who got some quick one-on-one time with Pop after the media scrum was over. Pop indulged various out-of-market reporters throughout, being shepherded by PR chief Tom James from one spot of the gym to another.

At one point a Japanese reporter and his assistant presented Pop with a gift of sake after their brief interview, as well as a framed scroll of his name they created through Japanese calligraphy. I guessed they sounded out the phonetics of "Gregg Popovich" and made up the corresponding four characters to go with it, if I understand how Japanese writing works. I apologize if I don't have that exactly right. Pop seemed extremely flattered by the gifts.

I asked the reporter what the individual characters meant, and he said, "Walk, continue to walk, beautiful, wisdom," explaining that put together it meant "Walk everyday to gain beautiful knowledge, which is what Gregg Popovich does." Maybe an interpretation is: if you travel to different places and have an inquisitive mind, the world will always seem beautiful and wondrous and you'll continually keep learning.

Manu Ginobili, like all the other players there on Friday, had to take some pictures in front of a green screen and repeat back phrases various the league wants players to say. Out of context, it was pretty odd for the first words for I ever heard in person from the guy I've idolized for the past dozen years to be "I pledge allegiance to the NBA app." 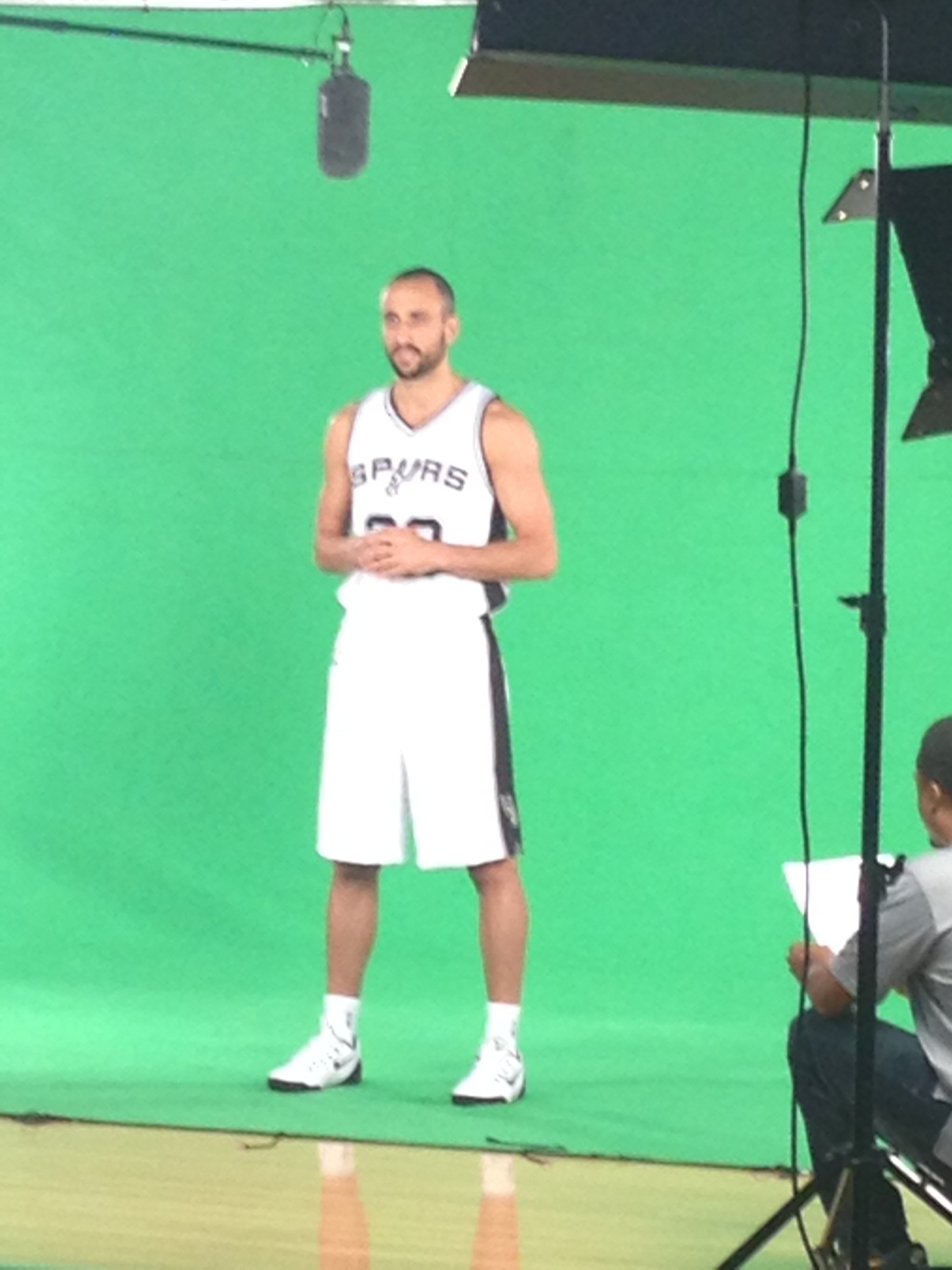 Later on, it was Ginobili's turn to do the action shots. They had him do a lot more complicated stuff and he put on a dribbling exhibition. 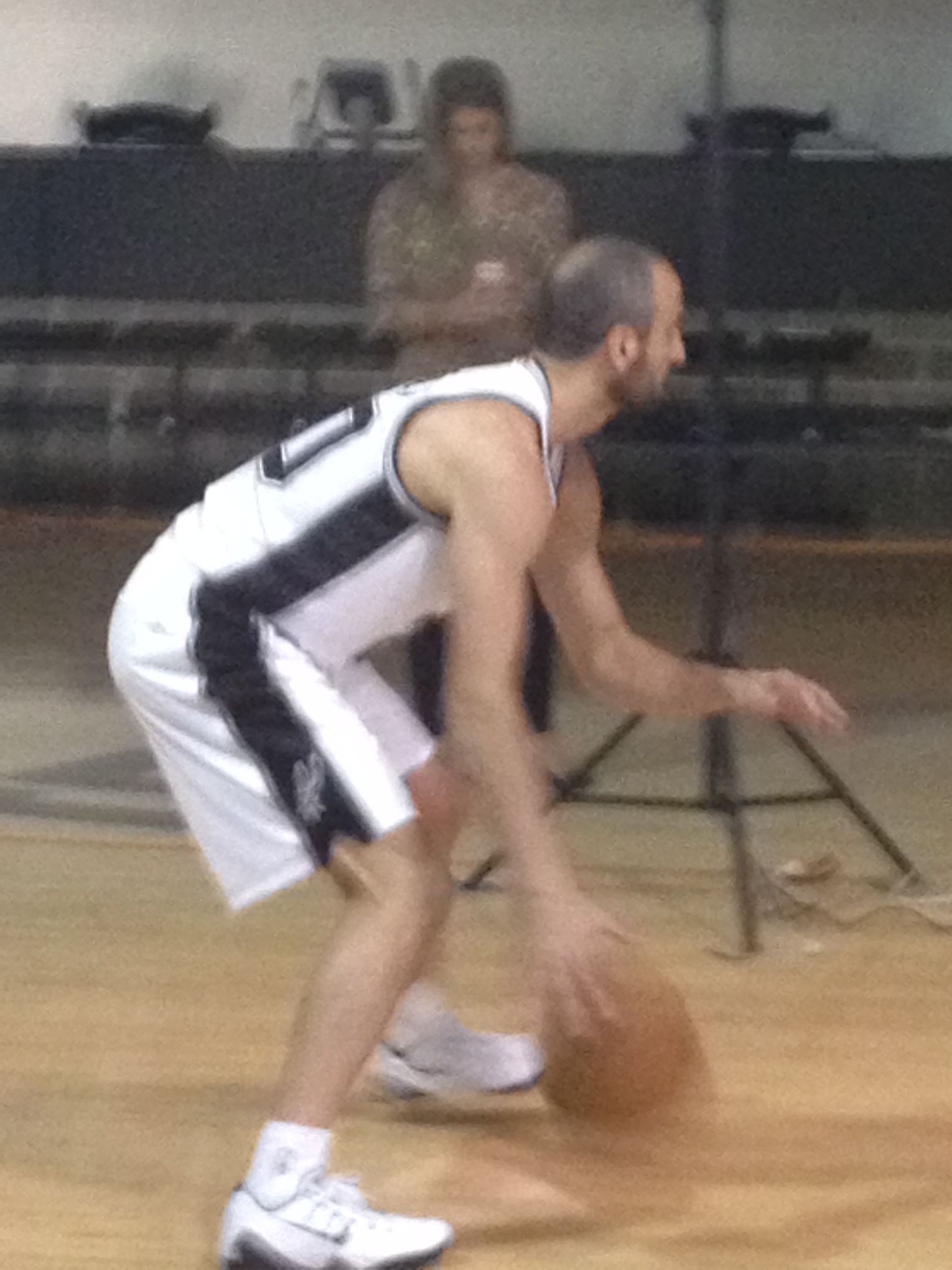 At some point, Ginobili yelled really loudly, out of the blue, and I have no idea if he was instructed to do so or not, but it got everyone in the gym to turn his way because not much was going on at the time.

R.C. Buford is a lot taller than I pictured. Skinnier too.

McCarney and Jeff McDonald were doing what plugged-in sportswriters do between waiting for interviews: exchanging gossip and comparing notes.

Tim Duncan is so skinny. Especially his legs. He noticeably drags his bad knee while walking. Duncan gave me the distinct impression that he felt his summer vacation wasn't long enough and that he couldn't believe camp is already starting up again. And yes, he's already nearly as weary of "The Punisher" questions as he is the retirement ones. 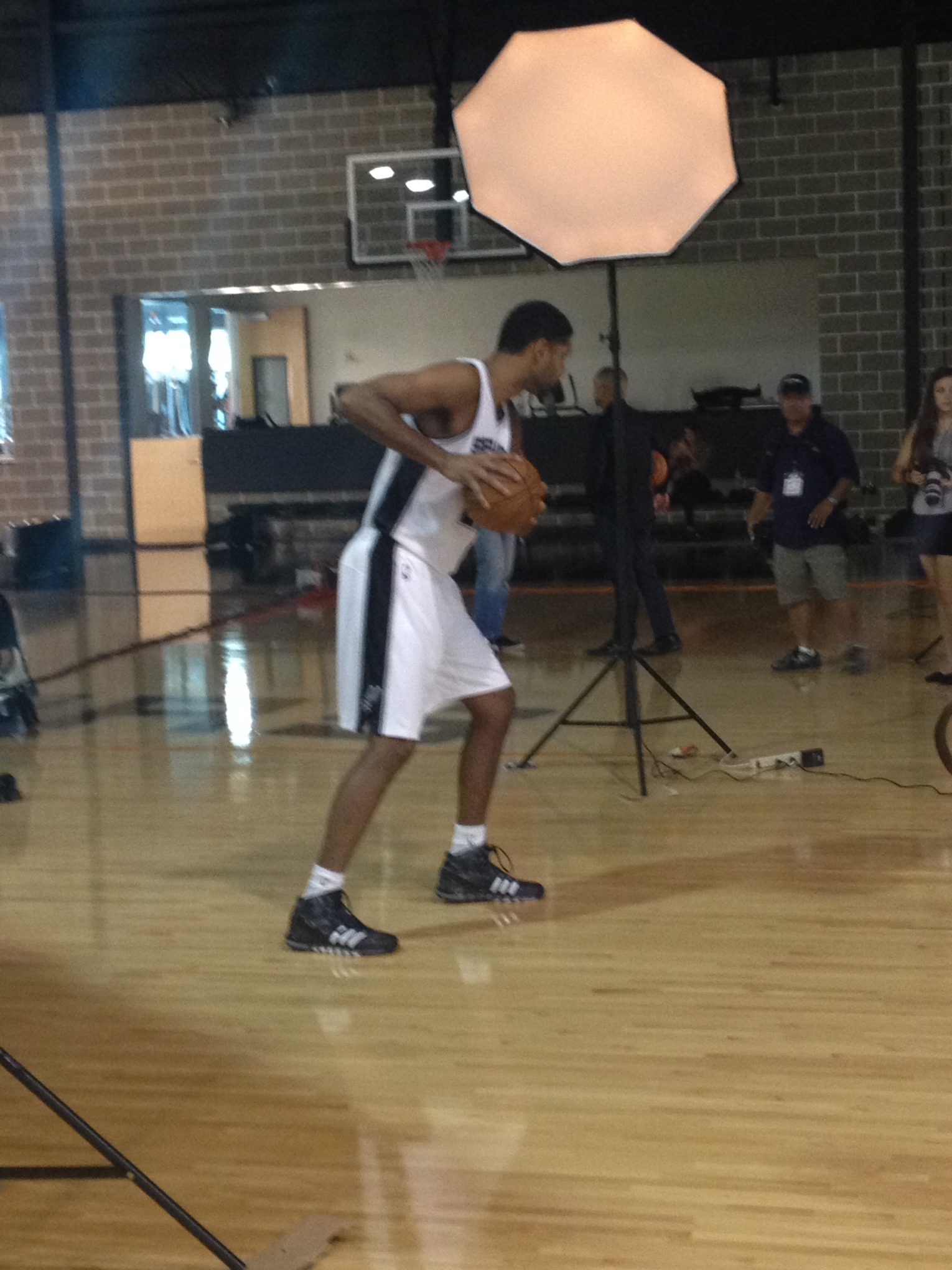 Man, seeing #14 on Danny Green is going to take some getting used to. 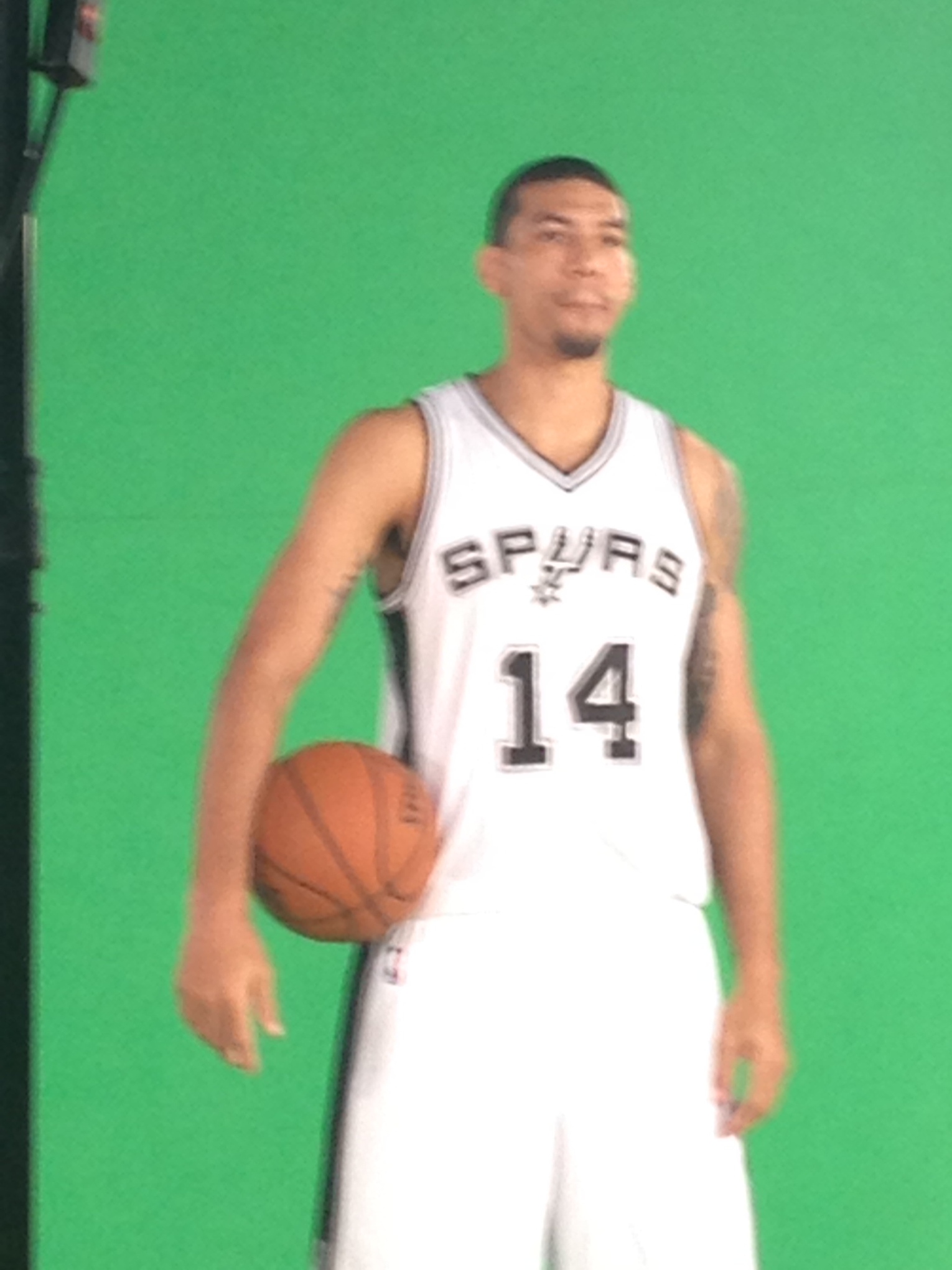 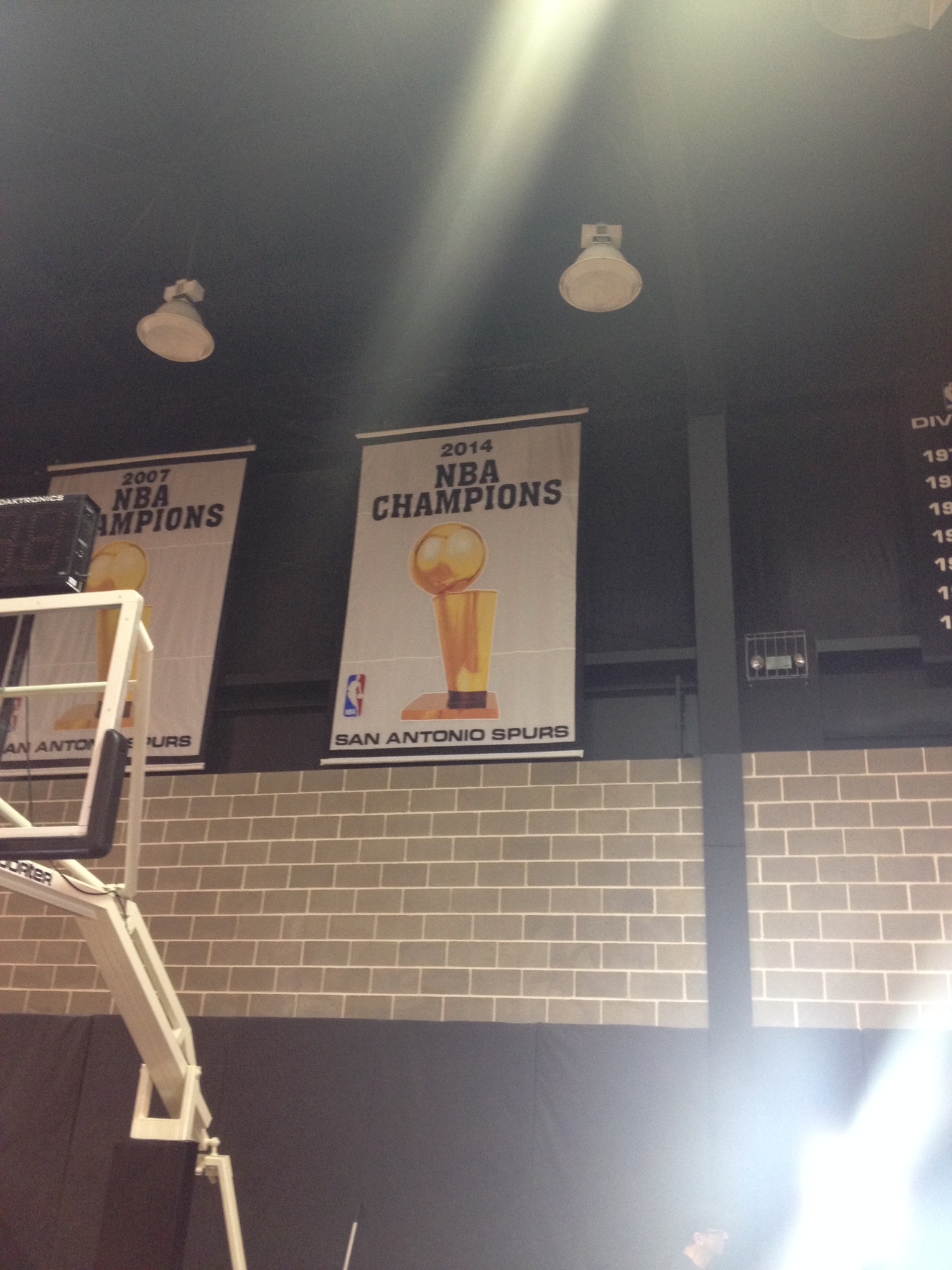 Also, the Spurs will be wearing gold patches on the back of their jerseys around the neck area that read, "5x"

Pop had the sarcasm gun cocked and loaded for the first question of camp, which was of course from Monroe, who asked him about the team's decision to bring everyone back for a title defense. It absolutely made the answer when Pop paused between the "Uh," and the "well." It was like at least three seconds of dead air.

"Uh ... well ... we had a pretty good year so ... I didn't see any reason to kick them out of town or make trades or changes. Plus most of them were under contract, and that makes it more difficult. It's a pretty good crew and they'll all come back and as usual they'll do their best and we'll either lose in the first round, second round, conference finals or win it all, who knows?"

Which made me wonder whether he'd just taken a shot at the weak Eastern Conference.

My first-ever question to Popovich resulted in a semi-Popping. I suppose I could have rephrased my question but maybe it wouldn't have mattered. I'll tell that story separately. I asked Pop a question and a follow-up about Manu Ginobili's health, and both of those went without incident.

Ginobili looked like he has been lifting quite a bit, and his beard was a lot thicker than I've ever seen it before. I was always under the impression that he couldn't grow a full one and had to settle for those scraggly beards, but this one was legit.

"I actually trimmed it," he revealed. "It was bad. A couple weeks ago it was really bad. I haven't thought about my look this year. I don't have too many options, but I'll do what I can."

At least you don't have any white hairs in it, somebody told him.

"If you look closely you'll find a few," Ginobili replied. "A few rebels."

Ginobili's leg may not have permitted him to rebel during the summer, so it's left for his beard follicles to take up the cause.