A portrait of Kawhi Leonard

The thirteenth in a series of profiles on each member of the 2013-2014 San Antonio Spurs.

Share All sharing options for: A portrait of Kawhi Leonard

A funny thing happened while scouting for the next Bruce Bowen -- the Spurs stumbled upon Tim Duncan's spiritual successor. 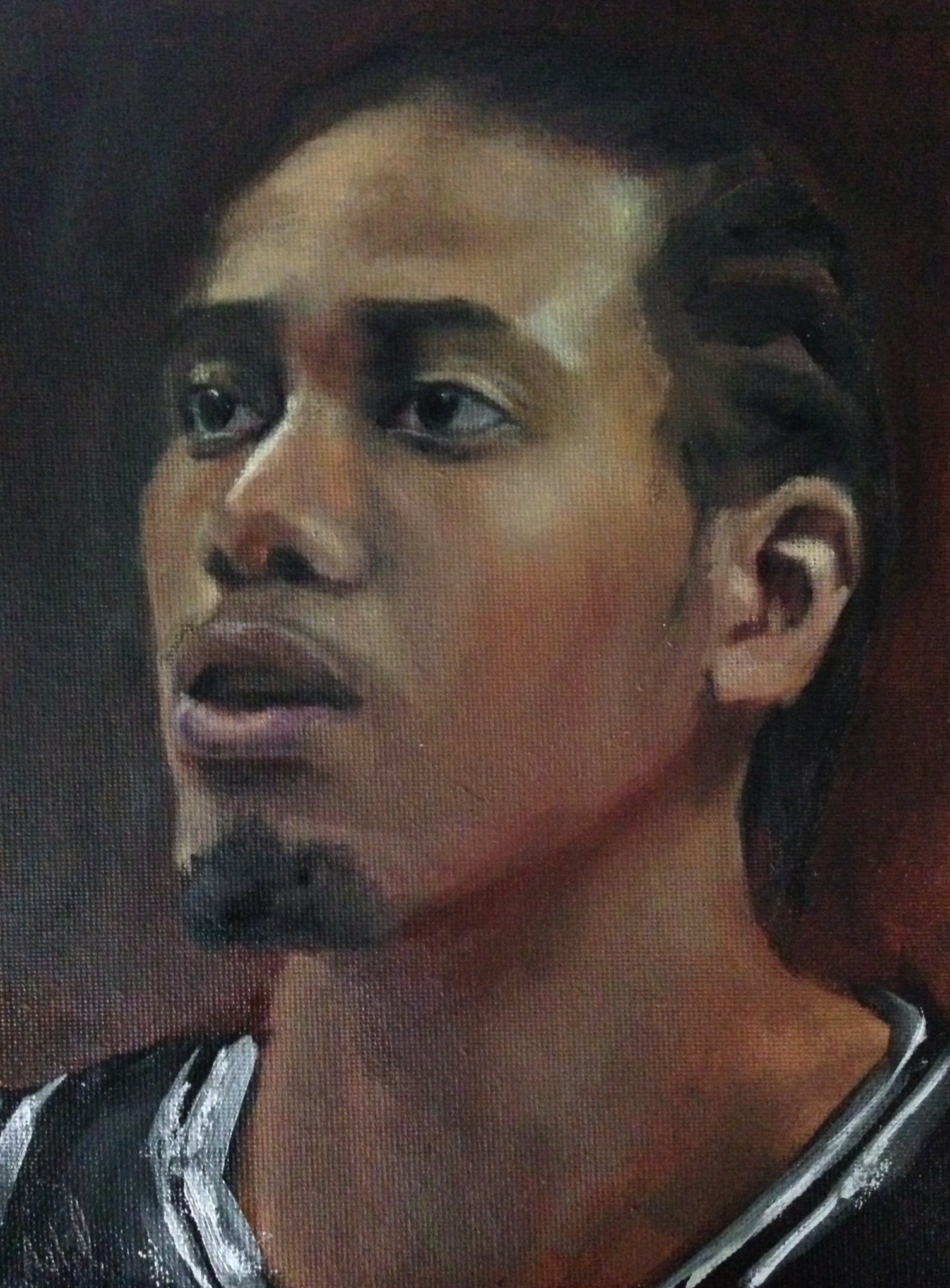 I recently had an epiphany about Kawhi Leonard that I think could explain how he and his coach, Gregg Popovich, view professional basketball. Early in Leonard's second season, Pop declared that he saw Leonard as the face of the franchise, but maybe that didn't have as much to do with his talent and ability as most assumed.

It has far more to do with temperament.

My hypothesis is that Pop's view of team dynamics is akin to that of a European soccer manager: there's a difference between a team's best player and its captain. Its talisman. Its face. There are guys who score goals and then there are the players the team looks to for leadership, the ones who guide them through adversity, who show resolve in the toughest away games without flinching.

Sometimes the most important job on the field falls to men who don't necessarily do anything that shows up on the stat sheet. They shut down the opposing team's best attackers and organize the defense while it falls to others to knock in the random goal in a 1-0 win. One of the appealing things about soccer is that sport's culture does a much better job of recognizing who the best players are irrespective of the basic stats -- but maybe it's a necessity to look deeper in such a low-scoring sport.

From the beginning, right under our collective noses, Leonard showed he was future captain material, working hard on his game and revamping his shot without the aid or prodding from coaches who were forbidden from contacting him during the lockout before his rookie season. Without knowing it, Tim Duncan was working out with his successor that summer. And Duncan admitted that he didn't think much of Leonard's prospects even though he noted the kid's work ethic. (R.C. Buford, your job is safe. Duncan didn't think much of Tony Parker at first, either.)

What stood out about Leonard, who was acquired on draft night in June of 2011 for the rights to the  beloved George Hill, is that he didn't feel the need to reassure the public that his bosses didn't screw up. He wasn't bold, he wasn't brash, and he didn't offer any promises. He wasn't camera-shy inasmuch as he seemingly didn't see the point of talking about himself. It's one thing to behave that way when you're a second-rounder or an undrafted free agent just trying to make the team. It's quite another when you're the highest-drafted player on the squad since Duncan himself.

Not much was expected of Leonard early on besides digging in on defense and helping out on the boards, but he took over the starting small forward job midway through his rookie year and showed flashes every night, his skills and repertoire expanding by the day. The stage got a bit too big for him -- and the team's other young, unproven players -- in the Western Conference Finals, and both Pop and the team's stars were guilty for not trusting the kids enough after a couple of losses. It was a teachable moment that they would not repeat.

A persistent knee injury hindered Leonard enough during his second season that the team never really followed through on Popovich's stated preseason goal of running some plays for him, but nevertheless he did show improvement in a number of areas while peaking in the Finals against Miami. If Duncan was the Spurs' best player versus the Heat, then Leonard was 1A. Not only was he completely undaunted by the prospect of guarding the best player on the planet on the world's biggest stage, but perhaps even more important in the long term view, Leonard seemed absolutely, genuinely unimpressed with himself and his accomplishments. You watch him, in context of the basketball universe spiraling around him, and he seems to be someone from another era, another planet. He's like Watchmen's Dr. Manhattan, oblivious to the useless puddles of emotion surrounding him.

Leonard's third season went mostly the way I expected, though I didn't count on him suffering a broken hand that would shelve him for 16 games during the middle of the campaign. It turned out to be a blessing in disguise. Not only did the forced time off give Leonard a chance to re-charge his batteries, but he worked out the kinks on a 3-point shot that had been off for most of the first three months. Leonard's return in late February coincided with an undefeated March and a franchise-best 19-game winning streak (regular season only). After having been a floating, struggling, inconsistent complimentary piece for the first half of the season, he was the team's best player after the All-Star break, a ball-swiping, rim-crashing two-way havoc-wreaking demon.

Perhaps the best example of this was an early March game against the two-time defending champion Heat. Leonard actually had a poor shooting night, making just 4 of 13 shots, but he had five steals, the majority of them against James, whom he harassed into a relatively miserable performance, just 19 points on 18 shots for the four-time MVP. The Spurs thrashed Miami by 24 points, a sign of things to come. It wasn't just a blowout, it was a team-wide exorcism of the ghosts of Game 6. From then on, I think the team really believed. It was evident that they felt they were better than the Heat. They just had to earn the right for that rematch...

Leonard's playoffs were a microcosm of his regular season -- he got better and better as it went along. After starting slowly against the Mavs, he played Nicolas Batum to a draw in the gentlemen's sweep of Portland. Though his numbers were modest against Oklahoma City, Leonard took turns cooling off Kevin Durant and Russell Westbrook. Pop's decision to switch Leonard on Westbrook in Game 5 was critical to regaining momentum in that series, and Leonard almost single-handedly kept the Spurs within shouting distance for the first half of Game 6. His block of a would-be Westbrook layup in overtime won the series.

The coup de grace came, of course, in the Finals.

After a lackluster first two games in which he was plagued by foul trouble, Leonard got a pep talk by Pop and, completely out of character, focused on outscoring James rather than limiting him. When the first quarter buzzer sounded, he had the edge in their mano-a-mano duel 16-14 and his team led 41-25. Leonard finished with a career-high 29 on 10 of 13 shooting. He followed up in Game 4 with 20 points, 14 boards, 3 dimes, 3 steals and 3 blocks, putting his stamp on the series with the ferocious put back slam of a ball he came out of nowhere to get. The Spurs had their stranglehold on the series and Leonard's toughest tasks in Miami were dodging his coach's jabs and answering Stuart Scott's questions. In the clincher back at San Antonio, Leonard and Manu Ginobili brought the team back after falling into a quick 22-6 hole, and Leonard finished with a team-leading 22 points to secure the Finals MVP.

To recap, Leonard not only set his career-high in scoring in Game 3 at Miami, but the first time he scored over 20 points in three consecutive games came in Games 3-5 of the Finals against LeBron James. Who does that?

Kawhi Leonard, playing for the San Antonio Spurs, trying to win a championship, and that's who I am right now, a ballplayer.

It wasn't until the off-season that Leonard truly showed he's all that Pop thought he'd be and more. In July he declined an invitation from Team USA to participate in the FIBA World Cup, citing the need to rest his body for the upcoming season. He told the San Antonio Express-News that he learned from watching and talking to Parker and Ginobili how much international competition took a toll on their bodies the following seasons. Leonard's professional commitment is to the Spurs, far and above any personal glory (though a cynic could argue he didn't want to risk injury before signing that max-contract extension).

Then it was revealed that when the time came for Leonard to showcase the Larry O'Brien trophy to his friends and family around his off-season home -- as all his teammates had done, Stanley Cup-style -- Leonard presented the trophy precisely one time, during his basketball camp for kids in the San Diego area. The he just kept it around his condo and didn't think twice about it.

"I didn’t have any time to do anything with it," Leonard explained to Mark Zeigler of the San Diego Union Tribune. "My workout schedule is crazy ... I’m just a low-key guy. I’m just happy we won it. I don’t even care about the trophy. The title matters the most."

There was one other prominent Spur who didn't do anything special with the trophy. In fact, this fellow refused the offer to have it in his possession for a few days. He didn't feel the need. Been there, done that.

Yup, it was Tim Duncan.