They made a statue of Manu Ginobili. Who's next?

Manu got a statue in Argentina. What should the Spurs do to immortalize Ginobili and his teammates?

Share All sharing options for: They made a statue of Manu Ginobili. Who's next?

Last week, Manu Ginobili tweeted a picture of himself standing next to this life-sized statue in Buenos Aires, in his home country of Argentina:

It wasn't that long ago that statues were the purview of mythological characters or dictators or military heroes. Even today, while the Baseball Hall of Fame has long featured busts of its inductees, to depict an athlete in a life-sized or larger statue in a public place figures to be a fairly rare honor. Or is it?

To that year-old list you can now add Manu and Robert Griffin III, who got a statue outside Baylor's new stadium.

Obviously those last two make sense, considering RGIII is being honored for his superlative college career (and the stadium it helped fund), while Manu's statue recognizes him as the greatest basketball player his country has ever produced. Since Griffin's college career and Manu's career with the Argentina national team are now over, it's appropriate to immortalize their accomplishments. To be sure, what I'm about to argue for is not going out and erecting any statues of current Spurs players and coaches. It's a little weird to honor people that way in the middle of their careers, like declaring a meal the best you've ever had before you've tried the tiramisu.

But should I not feel retroactively disappointed that there's no David Robinson statue outside the AT&T Center, or a George Gervin statue somewhere near the Hemisfair Arena site? (Call it the Ice Sculpture.) If someone wants to say Gervin isn't as "qualified" as the other statue honorees, I suppose I can't argue. Based on SI's list, the minimum threshold for an NBA player being bronzed would seem to be multiple Finals appearances. Then again, any sort of criteria we could infer from that list is probably less the result of some informal consensus and more the result of an arbitrary mixture of civic enthusiasm, nostalgia, and politics which usually spearheads high-profile public recognition. (This was exemplified by Kareem Abdul-Jabbar's recent - and very public - moping regarding his lack of a statue in front of the Los Angeles' Staples Center.)

When it comes to the Spurs, neither Gervin nor Robinson - let alone Pop or the Big Three - is going to campaign for such recognition. The purists and the more egalitarian might argue that, in the Spurs' case, it's wrong even to think of statues in terms of just individuals or triumvirates, and that, say, the entire 2014 championship team should get a statue to represent the collective accomplishments of this era in Spurs history.

To me, the bigger question isn't who should be so honored; I think all of those past Spurs greats should have statues either in front of the arena or elsewhere in San Antonio. If their basketball contributions aren't enough, we all know Gervin and Robinson are still very active in the community and emissaries for both the Spurs and San Antonio. Heck, Robinson arguably deserves a second statue just for his accomplishments outside of basketball. If Tim Tebow has a statue, David Robinson should have one. Simple as that.

As for Pop and the Big Three, rather than argue their qualifications, I prefer to dwell on which pose would look best outside the east entrance of the AT&T Center. Should Tim, Manu, and Tony be in simultaneous game poses or walking as a group? I personally would love to see this scene brought to life in sculpture: 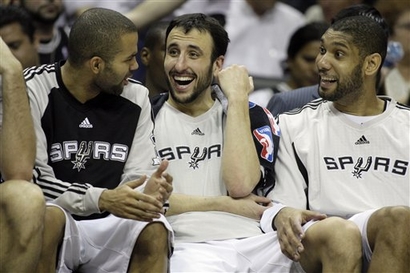 If you prefer something more serious and basketball specific, perhaps Tim should be in pre-game pose, embracing the ball, flanked on either side by Tony arcing a teardrop and Manu Eurostepping or about to throw down with the left hand. Or, maybe they should each be holding championship trophies to represent the titles they've won together.

Pop is another case entirely. The only NBA coach on the SI statues list is Auerbach, who is depicted sitting on a bench holding one of his famous victory cigars. It's a perfect pose for a coach whose prevailing demeanor was one of composure, self-assurance and being a step ahead of the competition both on the court and off. Contrast that with what we often see from Pop...

...and it's obvious that an imitation of the Auerbach statue would be somewhat unrepresentative of Gregg Popovich's coaching persona. Then again, stone-faced Pop would also make a great statue, or maybe press-conference Pop?

Yeah, that's better. Honestly, though, I think the perfect statue of Pop would be huddled down during a late-game timeout, surrounded by his team. Maybe those hypothetical egalitarian purists were right after all.

Obviously, the Spurs have more pressing concerns at the moment than erecting statues. There's a title to defend, a backup point guard spot to solidify, and a pending contract with a Finals MVP who may one day qualify for his own statue. After seeing Manu honored in Buenos Aires, though, it's worth thinking about ways in which the organization, the fans, and the city might honor the Spurs' current nucleus once it finally passes into history.

To be sure, putting up statues is a small, possibly even token, gesture which can't even begin to recognize all of Pop and the Big Three's accomplishments; but after seeing the ways in which other teams have honored their past heroes - some of whom accomplished only a fraction of what Pop, Tim, Tony and Manu have done - to not immortalize them in bronze would seem to be a particularly egregious oversight.