A lone (and huge) Spur will now lie at the center of the court.

The Spurs will bring back basically the same team that won the championship last season, but the court floor at the AT&T Center will get a new look.

The biggest change will be the replacement of the Spurs logo with the single spur at halfcourt. According to Zach Lowe of Grantland, the spur spreads 20 feet by 25 feet. 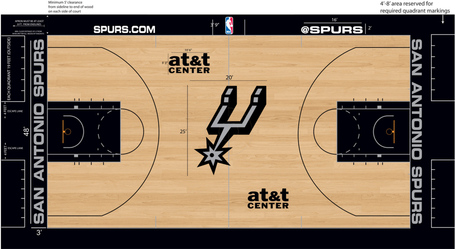 That must be a bummer for the Coyote, since he would fire up the crowd by getting them to spell out "Spurs" as he jumped to each letter. The single spurs used to be on the left mid-range area, from a player's view, but now that spot will be bare. Another new addition is the team's Twitter handle in front of the press box.

So what do you all think? Do you like the no-logo look, or is the new center spur a bit too much?