A Portrait of Boris Diaw

The twelfth in a series of profiles on each member of the 2013-2014 San Antonio Spurs.

Share All sharing options for: A Portrait of Boris Diaw

Forever a riddle, wrapped inside an enigma, baked inside an eclair, Diaw finally showed an appetite for points last season. (That's the only food-related joke in this article, I promise.) 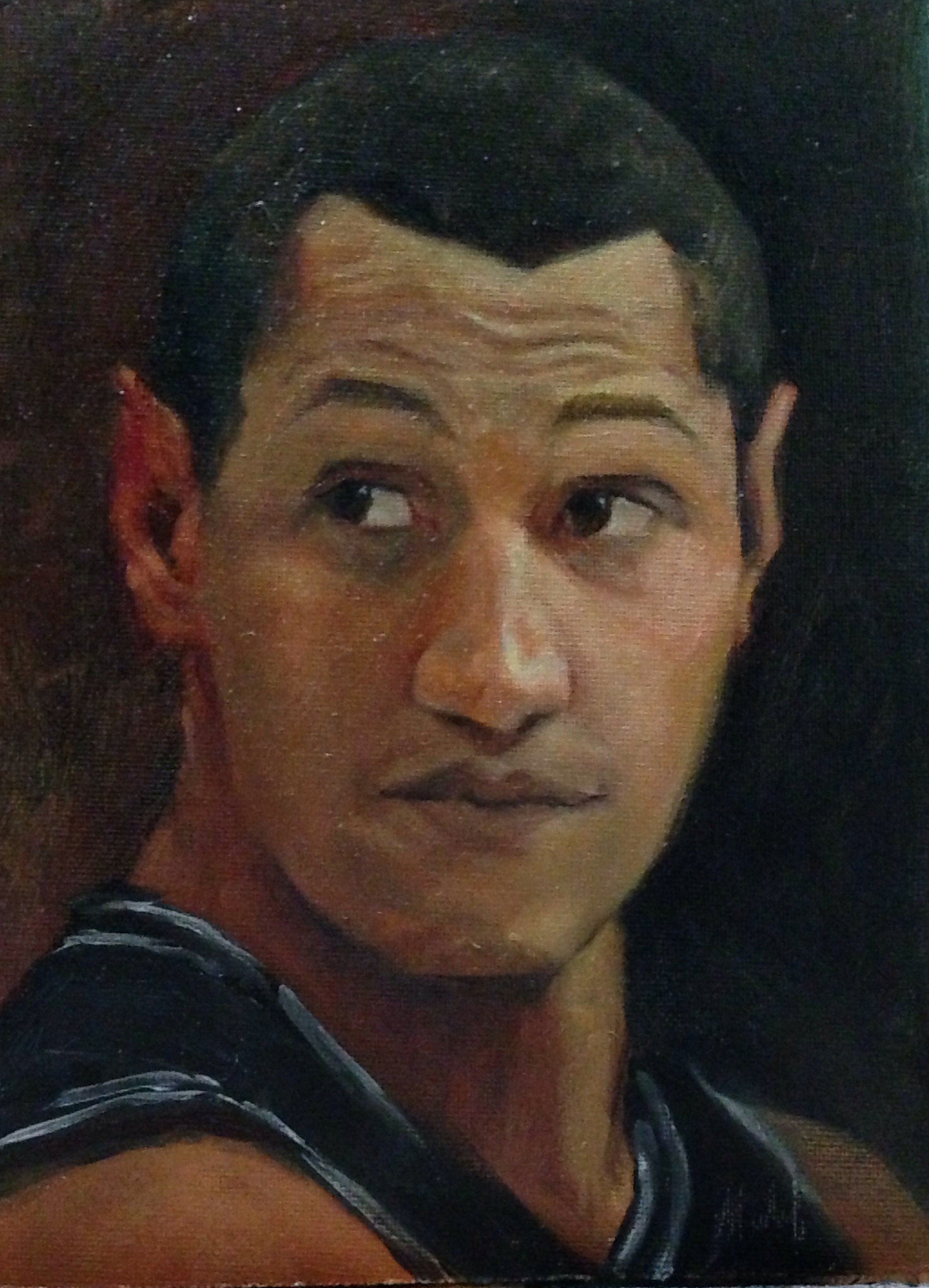 You know, it's not like Boris Diaw's never had a good playoffs before.

In 2005 Mike D'Antoni's upstart "Seven seconds or less" run-n-gun Suns looked like the best team in the league for most of the season. With Steve Nash orchestrating everything, Amar'e Stoudemire unleashing hell on the business end of pick-and-rolls, Joe Johnson feasting on more open jumpers than he'd see for the next decade, and Shawn Marion filling in with whatever was needed, Phoenix finished the regular season with a league-best record of 62-20. In the Western Conference Finals, they were upset in five games by the Spurs, even though Stoudemire averaged 37 points in the series.

The next season, Stoudemire missed the playoffs due to microfracture surgery. Would the Suns be sunk without their top scorer, especially after trading Johnson to Atlanta? Actually, no. Their season lasted one game longer, as they were eliminated in the Western Conference Finals by the Mavericks in six games. But they made it that far mostly because of the man they traded Johnson to the Hawks for: one Boris Babacar Diaw-Riffiod.

(By the way, Tony Parker has the honor of being the premier French athlete post-Zinedine Zidane, but how French is he, really? His father is American. His mother is Dutch. And he was born in Belgium. His name is TONY. PARKER. Now Boris Babacar Diaw-Riffiod, born in Cormeille-en-Parisis ... that is a Frenchman.)

Diaw, just 23 years old back then, averaged 18.7 points on 52.6% shooting with 6.7 rebounds and 5.2 assists in those playoffs, with a PER of 18.8. Against the Mavericks he averaged 24.2 points over those six games. He was a tour-de-force that spring, a perfect fit for that offense as a secondary playmaker for Nash and a versatile performer who could score inside and outside.

And then, for the better part of the next six seasons, Boris Diaw pretty much disappeared off the face of the Earth every spring. And his figure, alarmingly, began to resemble a globe.

It's easy to forget that in the 2006-07 Conference Semi-Finals against the Spurs, Stoudemire wasn't the only Sun suspended for Game 5 for coming off the bench. After Robert Horry's dirty hip-check of Nash at the tail end of Game 4, Diaw made the same mistake too. Only his loss was almost addition by subtraction for the Suns since he was such a non-factor in that series. Diaw took a single shot in 13:41 in the Spurs clincher in Game 6 and went scoreless in the game.

There was a brief resurgence from Diaw in Phoenix's five game loss to the Spurs in the first round of their 2008 series, but by then General Manager Steve Kerr had seen enough. Early in the next season, Diaw and Raja Bell were shipped to Charlotte for Jason Richardson and Jared Dudley. Diaw scored whenever he wanted and enjoyed plenty of freedom under Larry Brown and then later Paul Silas. But getting him to commit to defense proved rather difficult, and by the lockout season of 2012 Silas had grown so exasperated with the ever-expanding Diaw's lack of effort for a miserable Bobcats team that he gave him only 27.5 minutes a game, when Diaw had been logging well into the 30s his first two seasons there. And this was a miserable Bobcats team that needed all the help it could get. Diaw labored through the worst time of his career, taking just 7.6 field goals per game and shooting just 41%.

There were whispers that Parker, Diaw's best friend, had told him there might be an opening for him on the Spurs, and some saw his poor play as an attempt to get out of Charlotte. Diaw was indeed waived by the Bobcats on March 21, and less than 48 hours later he was in San Antonio, where his efficiency went through the roof. Diaw shot almost 59% overall and 61.5% from downtown, but he almost had to be begged to shoot the ball. He took a career-low 6.0 shots per 36 minutes and got just 20 minutes a night.

It was even worse in 2012-13, Diaw's first full season in San Antonio. The Frenchman averaged just 5.8 points in 22 minutes as the third big. Everyone in the league played miles off of him and the reserve units struggled as a result. Ginobili and others would pass it to him and then ... nothing would happen. Pop was so displeased with him after a lackluster Game 2 of the Finals that he benched Diaw for Game 3. Diaw responded with some inspired defense against LeBron James, but the lasting memory of that series is the rebound he couldn't get late in Game 6, after Pop put him in the game specifically because he thought Diaw would be a better option to guard against the three than Tim Duncan.

After scoring 374 points in 20 games in his first playoffs, Diaw had combined for just 321 over his next 49 postseason games, an average of 6.6 per contest.

Diaw was like the gifted student who is so much brighter than the other kids that he could do algebra problems in his head -- never seeing the need to learn the actual formulas or to show his work. The school would skip him a year in class and give him extra courses, but nothing would prevent the prodigy from growing bored and apathetic. It was all so easy for him. And then one day he looks around to see that all the classmates have passed him by. They had learned the value of working hard, and he'd finally reached a level where his gifts alone weren't enough.

In NBA terms, Diaw was finally being left behind.

The turnaround came, unexpectedly, in international competition. France went on an inspired run in Eurobasket 2013, upsetting Spain in the semifinals and beating Lithuania to win the gold medal. Diaw averaged 10.4 points over 11 games in the tournament, taking nearly nine shots a game in 28 minutes. It was the first time in years his aggressiveness broke out of its downward spiral. He took three shots per game more in 2013-14 than the season before. And when the team went through a mid-season stretch of injuries, Diaw, Duncan, Marco Belinelli and Patty Mills carried the team.

Diaw started slowly in the playoffs, but got better as the postseason went on. The Spurs needed his best to get past Oklahoma City and Miami's small-ball lineups that made it impossible for Duncan and Tiago Splitter to play together. "Medium ball," with the versatility Diaw provided, created the space that enabled everything else to work. He shot from deep when the opposing big was on him, and he bullied smaller defenders in the post. Diaw's 26 points in the clinching Game 6 at Oklahoma City were the most he's ever scored as a Spur, regular season or playoffs. And he iced the game with a critical rebound in overtime after Kevin Durant missed a three.

In the Finals against Miami he had at least nine boards in four of the five games and his eight-point, nine-rebound, nine-assist performance in Game 4 all but ended the series from a drama standpoint. The Heat just had no answers for how Diaw could bend their defense to his will, and he found Duncan and Splitter time and again for easy dunks.

The Spurs rewarded Diaw with a three-year contract extension, which Diaw signed in the most Boris Diaw way possible. For a guy accused of floating through most of his NBA career, it's apropos that he signed the dotted line on a boat.

So far, Diaw's new-found aggressiveness hasn't waned. He led France to another upset of Spain in the World Cup last week. He helped his countrymen capture a bronze medal despite being without their two best players in Parker and Joakim Noah. Maybe this version of Diaw is here to stay.

Perhaps Diaw can have his cake and eat it too.