Danny Green is more than just a "system player"

... but that doesn't mean the Spurs don't still have some on their roster.

Share All sharing options for: Danny Green is more than just a "system player"

In the latest installment of his must-read series of portraits of each player on the 2013-14 Spurs, Michael Erler made a point he has made many times over the years. It's an argument I've always found to be compelling: if there's anyone on the Spurs' roster right now that's comparable to Bruce Bowen, it's not Kawhi Leonard, but Danny Green.

I agree about the Leonard part. Of the two, Green is certainly the more similar. His role and skill set are obviously closer to Bruce's, at least on the surface. But there is one huge difference between the two which serves as a jumping off point for a deeper discussion: Bowen was a system player, a product of the team he played on. Green isn't. 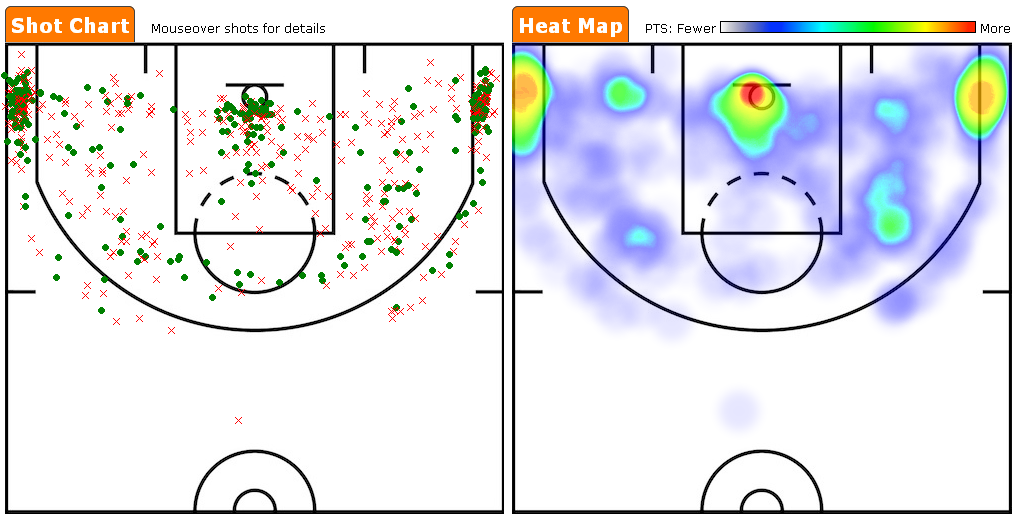 It's hard not to notice those huge clusters in both corners. Over 90% of Bowen's three pointers came from the corners in four of his eight seasons with the Spurs. That's an enormous amount. And in the four seasons in which he took more than ten percent of his three pointers from other spots on the floor, he didn't shoot well, reaching a 40% conversion rate only once. Simply put, peak Bruce Bowen wasn't an elite three point shooter; peak Bruce Bowen was an elite corner three point shooter. And that makes a huge difference.

Bowen was only useful on offense because the way the Spurs played back then created opportunities for him to shoot from the one spot on the floor where he was any good. San Antonio went to the post all the time, because Tim Duncan was almost unstoppable from there. The secondary options were Ginobili and Parker on drives to the basket. When teams tried to stop those lethal options, the corner shot was often surrendered. In any other system that asked their wings to do something more than hit assisted corner three pointers, Bowen would have been a huge liability on offense.

That's why he was a system player.

Now let's have a look at Green's 2013/14 championship season using those same charts: 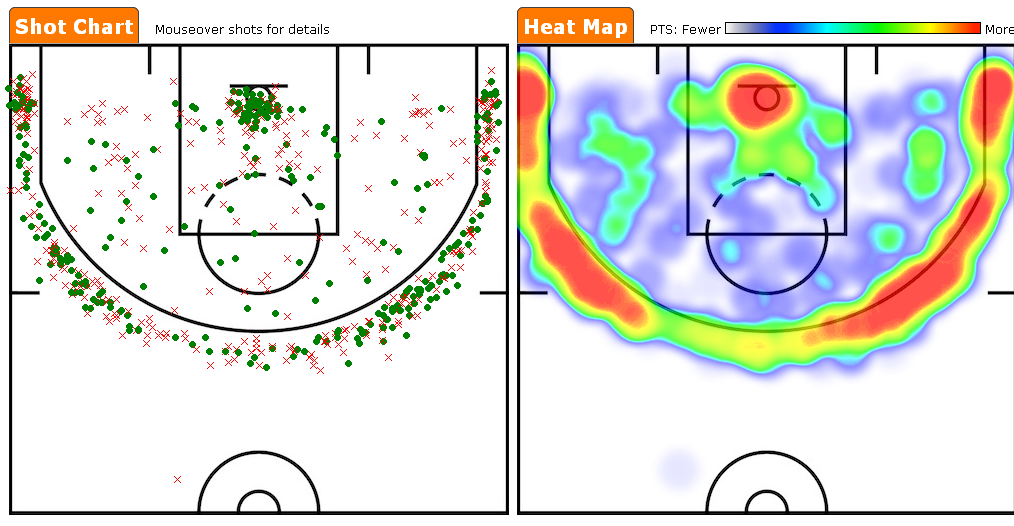 Feel free to go back and look at Bowen's again if you need to. The two sets look nothing alike. Green is an elite three point shooter from pretty much everywhere. In his three seasons with the Spurs, the average percentage of three pointers he took from the corner was below 40%. Every NBA offense creates three point attempts above the break, and Green can convert them as well as those corner three pointers Spurs fans know so well. And while his makes are mostly assisted, he sometimes creates his own opportunities in transition, after ball screens and on hand-offs. That simply wasn't in Bowen repertoire.

That's doesn't mean Green is a better player than Bowen. Defensively, Bowen provided enormous flexibility due to his ability to guard 1 through 4. And he had an unrelenting intensity to him that Green just doesn't yet possess. I can think of a number of contenders that would be chasing Bowen if he was in his prime right now. But he would have to be in the right system to have much value. I'm not sure that's true with Green.

I'd go as far to say that Bowen wouldn't be as valuable to the Spurs as Green is right now. And it's because the changes the Spurs have made over the past few years have made them a completely different team.

The Bowen type of wing simply isn't viable in the current system. Once Duncan stopped being a dominant post player, the Spurs went to an attack that featured the pick-and-roll. But it became clear that they needed to be more than that, since it was relatively easy for opponents to contain their offense by keying in on "the head of the snake." So they evolved into a dynamic offense that is almost antithetical to the one they employed in the Bowen era. In this iteration, wings need to be able to hit secondary break threes, move around continually, make timely cuts, and occasionally pull up. That description just doesn't fit Bowen.

Currently, the Spurs simply can't make do with system players on the wing. They need more well-rounded types. But that doesn't mean the system player has disappeared. In the past few years I can think of three Spurs who fit the bill: Gary Neal, Patty Mills and Boris Diaw.

As Manu Ginobili has aged, he developed traits associated with point guards. He excels when he handles the ball and creates for others. That evolution meant he needed a different type of running mate, someone who could take spot up threes when they were there and could act as a scorer in a pinch. Mills and Neal filled that role, one which not many teams can accommodate. That type of shoot-first small guard is only truly valuable when paired with someone who can take the playmaking burden from them. Lacking that, they are gunners with little in the way of creative passing who settle for off-the-dribble shots more often than necessary, something Milwaukee learned the hard way when they signed Gary Neal.

Diaw's case is exponentially more interesting. System players are typically thought of as having limited talent. Yet Boris Diaw is the epitome of a system player despite being arguably one of the most naturally talented players in the league. That's because Boris can only thrive in free-flowing systems that allow him to be everything at the same time: passer, scorer, post up threat, three point shooter, and ball-handler. When his role is limited or strictly defined, he becomes less effective. Only with the Amare-less Suns -- and now in the motion-based, pass-heavy Spurs' system -- has he truly excelled. I'm not sure there is any other team in the League in which he would be as productive as he is on the Spurs.

The evolution of the Spurs' offensive system has been remarkable. The way the coaching staff recognized that the recipes of the past weren't going to cut it anymore is hugely responsible for the maintained relevance of the franchise. But it wasn't always easy.

There was a significant amount of trial an error involved in the process, which at times was hard to stomach. Pop didn't let go immediately. The tenures of Keith Bogans and Richard Jefferson were an attempt to recapture the success of the Bowen-Finley years. George Hill was the perfect halfway point between the Neal/Mills type and Green. Once he had to be sacrificed in order to get Leonard, his responsibilities were bequeathed to two players, finally allowing Pop to completely let go of the old paradigm and embrace the new system.

As fans, we are still not fully there yet. That's why we define current players by comparing them to past ones, why we want to know who the new Bruce Bowen is. The answer of course is: no one. There is no room in this iteration of the team for a player like him. Looking for another Bowen when the team had the real thing was as much of a waste of time as it is to look for the next iteration now that the team has no need for it.

That's a good thing to remember. In a few years, when the Spurs are a completely different team than they are now, it would be great to keep from wondering where the next Patty Mills or Boris Diaw will come from.