A Portrait of Marco Belinelli

The eighth in a series of profiles on each member of the 2013-2014 San Antonio Spurs.

Share All sharing options for: A Portrait of Marco Belinelli 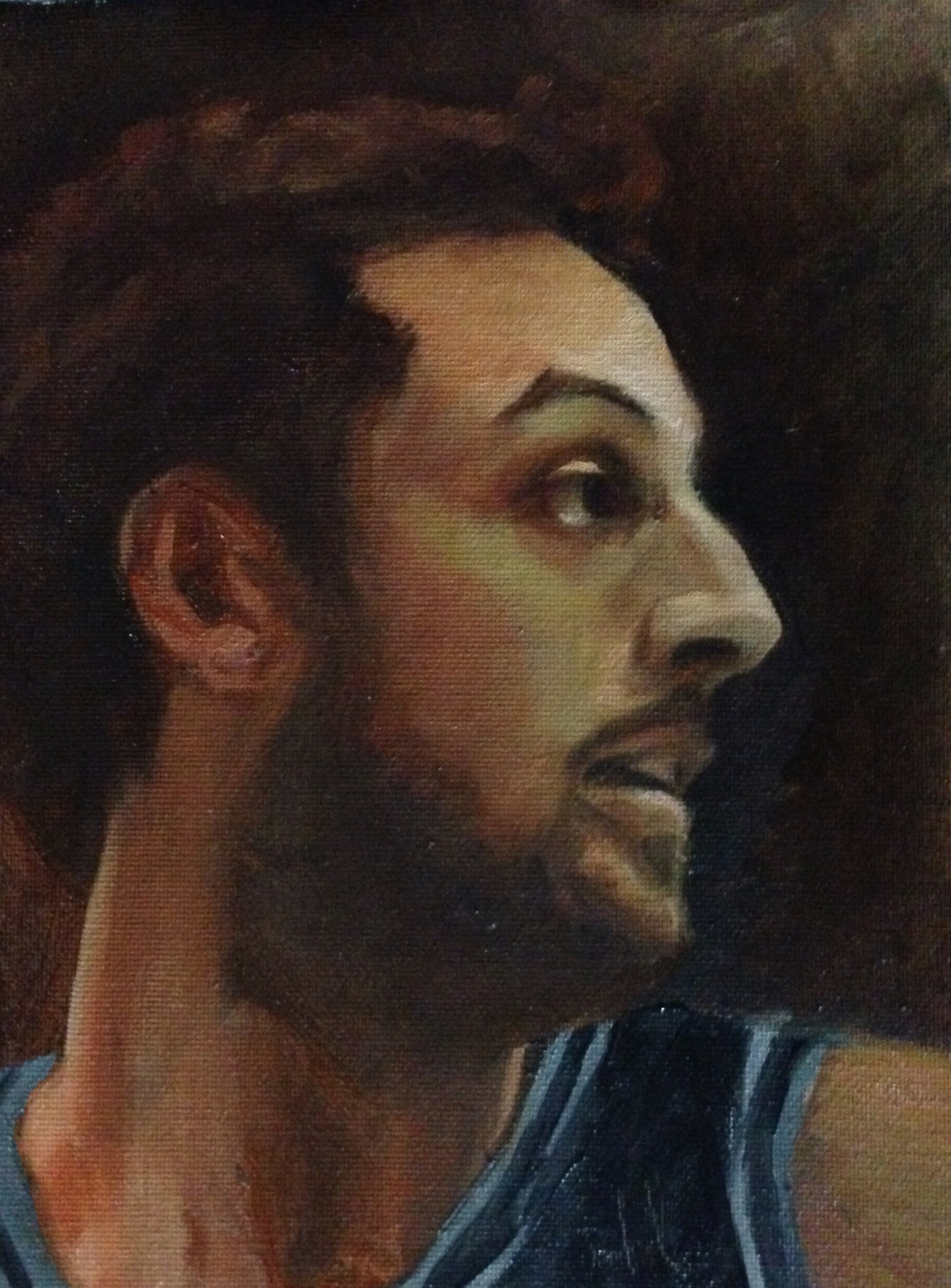 It might be hard to remember now, but Marco Belinelli had a fantastic season as a first-year Spur. He set career-highs in virtually every counting stat including points, rebounds, assists, steals and blocks as well as shooting percentages from all three categories, rebounds per game, assists per game, points-per-36 minutes, PER, Offensive Rating, Win Shares and Win Shares per 48 minutes. Again: in all of those areas he set career highs.

If you're at all familiar with Popovich Era Spurs history, you know that free-agent signings simply don't do that in their first seasons for the Spurs. Something about the playbook being too dense, the system too complicated and demanding, Pop's standards too high.

Belinelli proved the exception to that rule, meshing with Manu Ginobili and the rest of the "Foreign Legion" from Day One. He knew where to be, he made proper rotations (more or less), he made the extra pass and he fit in like a lifelong Spur. He was every bit the difference-making transaction he was hyped up to be. When the Spurs captured that elusive fifth title, you could see in the video how much it meant to the newcomer, even though he struggled in the playoffs.

Now I don't speak Italian [Editor's Note: click here for a translation. - jrw], and it's entirely possible that Belinelli was moved to tears because he was thinking of all the women he could impress during the off-season by showing them the trophy -- every Spur is getting to spend time with "Larry" during the off-season -- but clearly Belinelli wanted a permanent keepsake.

Our amazing dev team has confirmed that Marco Bellinelli's hot of the iron ink is going in #NBA2K15pic.twitter.com/E8UEImeeQI

The single stat that blows my mind with Belinelli, the one piece of Spurs trivia from the season I'll remember til the day I die, is that Belinelli finished second on the team in minutes played last year during the regular season, with a career-high 2,016, the only Spur to crack 2,000 besides the immortal Tim Duncan, who may in fact have been bitten by a vampire a few years back and will remain a 35-year-old when we're all dust.

The team suffered an almost comical spate of injuries to their perimeter players, most of them overlapping, from late November until February, requiring the Italian who came over from the Bulls to log heavy minutes. (Even on a per-game basis, Belinelli finished fourth on the team in minutes, behind Tony Parker, Duncan, and Kawhi Leonard.)

To Belinelli's credit, he looked like someone who was earning his minutes, even if it wasn't necessarily the case. He averaged 13.5 points on 51.8% shooting in January and 15.2 points on 51.3% shooting in February, helping carry the Spurs at a time when it was pretty much he, Duncan, Patty Mills and Boris Diaw against all comers. Marco even won the 3-Point Shootout during the All-Star break.

But where Belinelli's season turned for the worse, was an early-April game at Oklahoma City, pretty much the Thunder's last gasp in their attempt to catch the Spurs for the home-court advantage and a cursed SEGABABA for the good guys. Belinelli had an awful night, shooting poorly, playing defense like a sieve and turning it over four times. From then on it was apparent that his place on the totem pole dropped somewhat, especially in light of the fact that everyone else had returned to health and were all in relatively good form.

Once the playoffs rolled around Belinelli struggled from the outset against Dallas, particularly on defensive. He wasn't getting the room he was accustomed to for his shot because Mavs coach Rick Carlisle's game plan was to stick to the shooters come hell or high water. The defensive struggles in retrospect shouldn't have been surprising. Dallas led the league in offensive efficiency the second half of the season and were one of the few teams other than the Spurs where every man on the floor was capable of hurting you. There was simply nowhere to hide Belinelli, who struggled similarly at points in the regular season (such as games against Houston) where he had to play with the starters in Leonard's absence and guard people like James Harden rather than ordinary bench guys. Marco's PER for the series was a miserable 4.22, while his net rating was -24.4, ranking 143rd and 140th respectively among all players who participated in round one.

Belinelli rebounded nicely in the second round against Portland -- a team he'd torched all regular season as well -- and picked up the slack for a slumping Ginobili against the Blazers. His 143.4 offensive rating ranked second among all second-round playoff participants and he wasn't even exploited by the randoms on Portland's bench. Things were looking up for him just in time.

And then nothing. Barely heard from against Oklahoma City and Miami, the 10th man playing spot minutes in what was, essentially, an eight-man rotation. The only games he cracked 20 minutes were Game 4 at Oklahoma City and Game 2 vs. Miami, both Spurs losses.

But even in those series Belinelli had crucial moments. After not playing at all for the first three quarters of Game 6 against the Thunder, he came in for the fourth and hit a three midway through the period that momentarily halted an Oklahoma City rally. The Spurs held them off until the very end, before needing heroics from Ginobili and Leonard late in regulation and Duncan in overtime.

Then came The Finals rematch, where the most important shot of the series was Belinelli's 3-pointer late in the third quarter of Game 3, after the Heat had quickly turned a 25-point deficit to seven. Marco's only points of the game got the lead back up to 10 and completely changed the momentum. Had the Spurs lost that game, you could imagine them losing the Finals in heartbreaking fashion once more, the AmericanAirlines Arena their ultimate house of horrors.

Maybe the problem was that Belinelli simply played more minutes than he expected to and wore down as his longest season kept on being extended. He seems to be working like a madman to get in better shape for next season, which shouldn't surprise anyone considering it's a contract year coming up. While some players look like they're dragging around a spare tire during the off-season, Belinelli literally is. 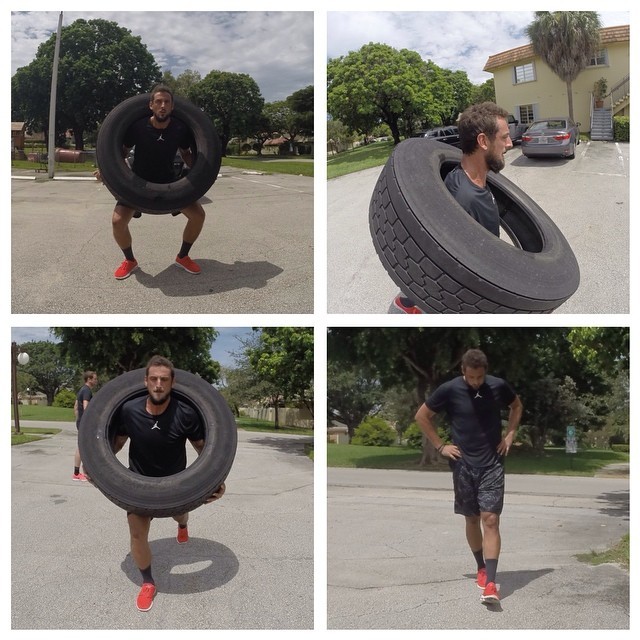 He's also pulling trucks and doing bizarre weightlifting regimens that look like a part of the training regimen Rocky did before squaring off against Ivan Drago in Rocky IV, which fits I suppose given Marco's passing resemblance to a young Sly Stallone, and his sometime nickname of The Italian Stallion.

Belinelli helped deliver what he was signed to do, even though his playoff numbers weren't flattering. The bottom line is the minutes he gave during the regular season helped save the legs of the others and enabled the Spurs to win games they had no business winning, given who was on the floor for them. There's simply no way that San Antonio captures home-court advantage without his contributions.

The hope is that next season he'll be able to help even more.