People have been asking JRW about t-shirts forever. Well, the day has finally come.

Share All sharing options for: Celebrate the Spurs' championship with a t-shirt

I never tire of little reminders that the Spurs won the championship. Whether it's going through my DVR to click "save until I delete" next to all of the playoff games, or organizing my coffee table and running across my copy of Sports Illustrated with Kawhi Leonard on the cover -- I guess what I'm trying to tell you is that I'm having a pretty enjoyable summer.

But last week, it got even better because this came in the mail. 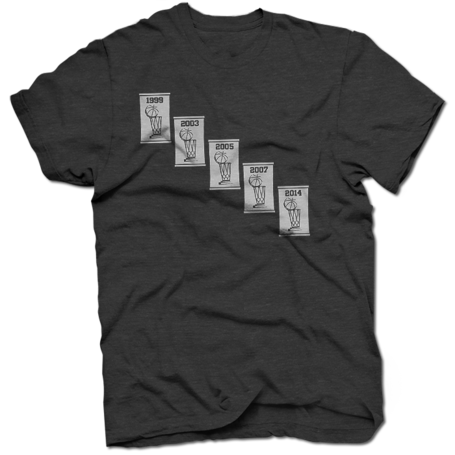 And I wore it to work. And people noticed it and asked if it was a Spurs shirt and I got to have cool conversations that wouldn't have happened if I'd been wearing something garish and official and (oh, I dunno) blazingly-white.

Full disclosure, the shirt was sent to me by the guys at BreakingT. I did not buy it myself.

That said, I've been looking for great shirts to promote on the site since I took over PtR nearly four years ago. And this is the first shirt I've worked to have sold on the site. It's comfortable. It's crazy-soft. (I hate cheap, scratchy-rough shirts.) It has a banner on it that doesn't even exist yet. At least, if it does exist, not yet hanging from the rafters yet.

But by far the coolest thing about partnering with these guys is their speed. BreakingT is built to turn brand new designs around on a dime. Which means that when something like Pop's original "I want some nasty!" speech happens, we can be wearing shirts of our own design that same week.

So, if you want a cool-looking, soft-as-Charmin, five-banner shirt to commemorate the Spurs decimation of the Heat in the Finals, you can be my guest -- and they're not charging for shipping during the summer. Last thing, if you're in-between sizes and you're trying to decide; go with the larger of the two.

Shipping is USPS Priority Mail which is usually 2-day shipping time in the continental US.