A Portrait of Cory Joseph

The fifth in a series of profiles on each member of the 2013-2014 San Antonio Spurs.

Share All sharing options for: A Portrait of Cory Joseph

I don't know if Cory Joe is Pop's new favorite player, but he probably should be ours. 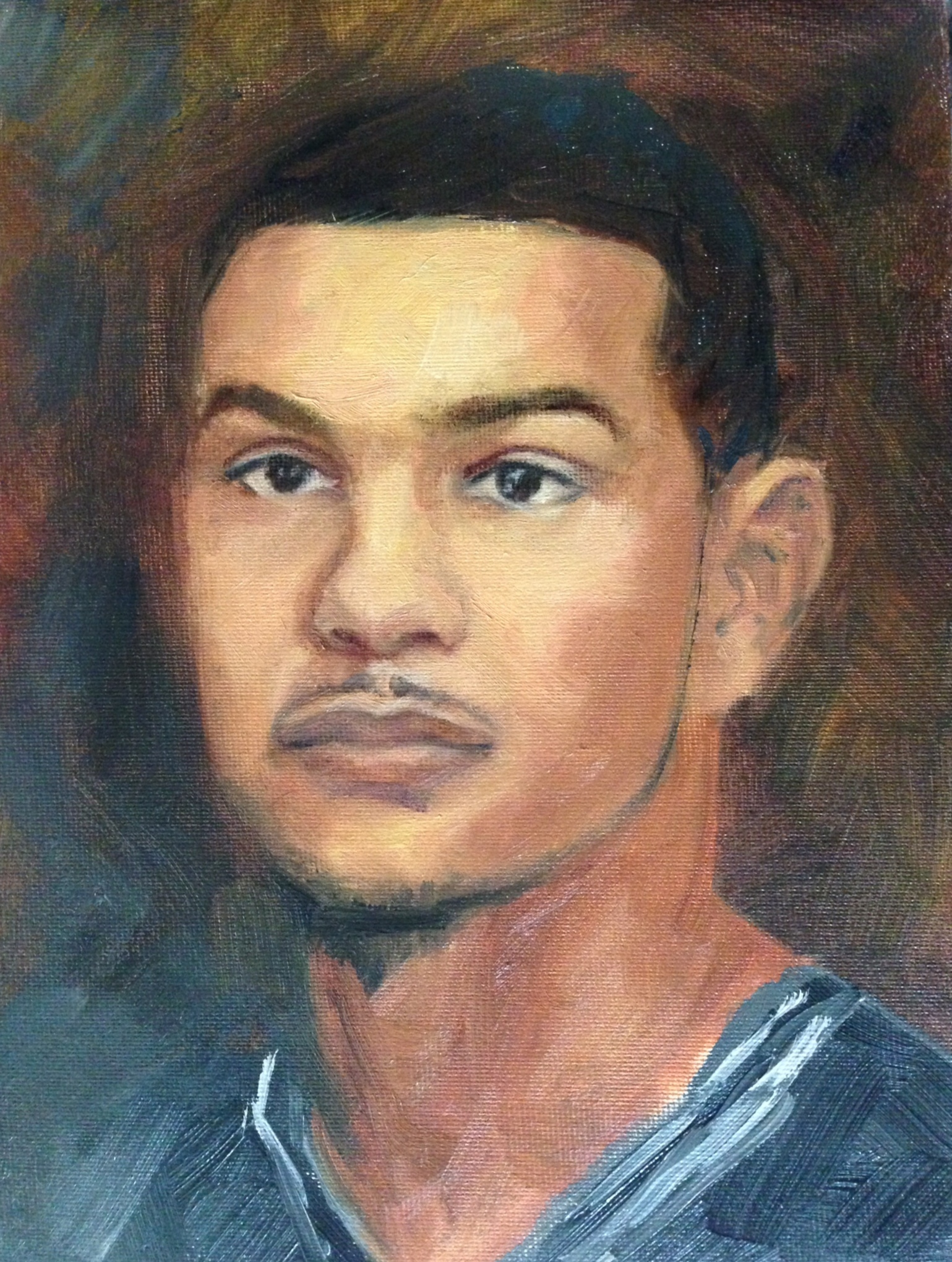 It's really not about the dunk over Serge Ibaka.

It's not about one play that happened during garbage time of a game the Spurs lost handily against the Thunder.

Many Spurs pundits have written about how that one play, even coming in the circumstances that it did, was the most important of any in the entire postseason for San Antonio. The narrative of it is that the play inspired the rest of the team to attack the Thunder, and Ibaka specifically, without hesitation or fear. If the smallest man on the roster can explode over the shot-rejecting Adonis for an emphatic slam, what's stopping his bigger, more talented teammates from finishing strong?

While that version of events is impossible to prove one way or the other, it's undeniable that Gregg Popovich challenged his team to play as hard and fearlessly as Joseph did. However, he also railed on his charges for taking it to the hole against the springy Congolese big-man in Games 3 and 4, going into his familiar refrain about having to pass out pictures on the bench so that the players recognized their opponent.

The only thing we know for sure is that the play of Joseph, who led a Spurs third string comprised of fellows such as Matt Bonner, Jeff Ayres, Aron Baynes and Marco Belinelli, was competitive enough that Thunder coach Scott Brooks felt compelled to leave his starters in until just 1:07 remained in the game. Ibaka, still somewhat compromised by a small tear in his calf, certainly looked sluggish in Game 5 two nights later. Russell Westbrook and Kevin Durant weren't as sharp or energetic in that game either.

When it came time to play Game 5, Joseph's reward for the inspiration he gave was to sit on the bench until garbage time. Just like usual. If he was at all disappointed, you certainly couldn't tell from the bench, where he cheered on the man who took his backup job, Patty Mills, the same way he had all season. I don't know how he did it, but there's no doubt that Joseph is a better man than me.

The misconception about Joseph's 2013-14 campaign was that because he lost his backup gig to Mills, he didn't play as much as he had before. But the reality is that he actually participated in 11 more games and 282 additional minutes of action last year than the first two seasons of his career combined, while posting his best scoring and shooting stats as a Spur.

Not only did Joseph see plenty of garbage time action thanks to all the blowouts during the regular season, but more importantly he started 19 games as Parker's understudy, subbing in for the French star while he was resting or benched because of his "various maladies." There were also a handful of times when Joseph started at the two alongside of Parker due to a mid-season injury epidemic to the team's wings. Plenty of NBA vets would've groused at that, being put in a position to be embarrassed by the coaching staff. But without complaint, Joseph sacrificed himself for the greater good, gamely being abused by the likes of Durant, and others he had no business guarding.

It's easy enough to deduce why Pop prefers Joseph starting to Mills, whose effectiveness is almost entirely predicated on his ability to get shots up early and often. Joseph tends to blend into the scenery more, to run the sets and get out of the way, which is ideal when sharing the floor with Tim Duncan and Kawhi Leonard. Mills works better as a sparkplug reserve, getting open somewhere behind the three-point line for pass-happy "Foreign Legion" line-mates Manu Ginobili and Boris Diaw to find him for spot-up opportunities.

That dunk over Ibaka was nice, but the true essence of Joseph -- the game that validated his value -- was the closeout Game 6 at Chesapeake Energy Arena in Oklahoma City, a place the Spurs hadn't won in their past nine tries. Parker's balky ankle bothered him enough to render him ineffective in the first half, punctuated by a particularly grizzly turnover right before intermission, and the decision was made to shut him down with the Spurs trailing by seven at the break. The conventional wisdom was that he was being saved for the inevitable Game 7.

Joseph started that second half (as did Bonner) and it was clear that he saw himself as anything but a white flag. His fingerprints were all over an early 14-5 run that got the Spurs back into the game. He blew past Westbrook on one drive, drawing Ibaka in to challenge the shot and leaving a simple tip-in for Duncan, uncontested for the rebound. A couple of possessions later, he faked Westbrook on his can with a jab step and drilled a jumper. The next trip down he found Diaw for a wing three and the Spurs had their first lead of the second half. By the time the smoke cleared in Joseph's seven minute stint, the Spurs were up a bucket, on their way to a 37-20 third quarter.

It's one thing to play well against the other team's stars when they're up double digits and coasting down the stretch. It's another altogether to be able to hold your own in the middle of a close game when the opponent's starters are playing for their playoff lives. Joseph showed that he belongs, as he did all season.

There was a time, not too long ago, when Pop labeled George Hill, another young guard drafted late in the first round, as his "favorite player." Hill was similarly fearless and team-oriented, a defense-first grinder who looked athletic enough compared to his aged, floor-bound teammates, but wasn't overly quick or fast or even all that much of a leaper by NBA standards. Hill's jumper was suspect, his handle wasn't great and his floor vision as a lead guard left much to be desired, but he competed and did everything asked of him, often playing at a size disadvantage at the two guard. The Spurs often went with a three guard lineup in money time during Hill's last couple of seasons because he was more reliable and had more fire in him than Richard Jefferson.

Still, for all Hill's moxie and desire, he was superfluous -- a third guard backing up a pair of Hall-of-Famers -- and there were obvious holes elsewhere. With considerable consternation, the Spurs dealt him to his hometown Pacers for the draft rights to Kawhi Leonard, a small-forward with ideal size. Leonard seemed to be such a perfect fit on and off the floor that the Spurs simply couldn't pass him up. An emotional Pop made the phone call to inform Hill of the trade himself.

There's a lesson in there for Joseph. Mills' rotator-cuff surgery opens the door for consistent minutes through the first half of the season at least. He's always been the safer, more conservative option for Pop, someone who can contribute a steady, consist string of C, C+ performances as opposed to Mills, who tends to be either brilliant or awful and seldom offers anything in between. Now Joseph will get a real chance to display his wares and showcase his development. He's better than most backup points in the league and could even start for a couple of teams. The first few months of the season will be an opportunity to prove that.

And maybe it'll be deja vu all over again and the Spurs will deal another favorite player for one who fills a hole on the roster. After all, both Parker and Mills signed extensions in the off-season. Neither of them are going anywhere.

As great as it was, it was never about the dunk for Joseph. It was just two points in a lost cause. What mattered more was what Joseph showed before and after.

It was a pretty sweet dunk though.