Last season's Spurs were recognized by a number of different organizations for so many of different awards that it's easy to assume that they outpaced every other Spurs team. But did they?

Share All sharing options for: Were the 2013-14 Spurs the most decorated ever?

I tend to look on NBA awards with skepticism. Yeah, I'm an crotchety old man on the inside, but one tends to get dismissive after watching the NBA for two decades and seeing things like Karl Malone and Derrick Rose winning MVP awards just because people were tired of voting for Jordan or LeBron, or each year's Most Improved Player just be the guy who went from 10th man to marginal starter because his team was desperate that year, or seeing Phil Jackson win exactly as many Coach of the Year awards as Scott Brooks.

Individually, awards are nearly meaningless. You could give LeBron the MVP every year from 2005 to whenever he retires and elicit not a peep of rational argument. He's so clearly the league's most valuable person/entity/franchise/brand/name/whatever that the NBA should just be done with it and name the thing after him. Awards are exactly the kind of thing a team like the Spurs try to avoid, because they're largely superficial, put focus on self, and distract from the big picture.

In aftermath of the 2013-2014 season, however, the Spurs won so many different awards that it's probably worth a little bit of extra scrutiny. What was it about this team that made it so recognized and appreciated by selection committees, arbiters and judges? Were all the awards simply a lifetime achievement sort of thing, like a macrocosm of R. C. Buford's long-overdue Exec of the Year trophy? Is there some way to deduce from the hardware whether or not this team actually was the best Spurs team ever?

With the awarding of the prestigious Mascot of the Year Award to the Coyote, it would appear the 2014 Spurs' honor of recognition is complete. And it is pretty decent haul: Coach of the Year went for the third time to Pop, Executive of the Year to Buford, Tony Parker was named All-NBA Second Team, Kawhi Leonard was named All-Defensive Second Team and Finals MVP and also got an ESPY, along with Pop, whom I'm sure will cherish it for life. And, of course, they have the championship rings coming. That's got to be the best string of awards ever by one Spurs team, right?

Let's start with All-Defense. From 2002 to 2008 the Spurs placed two players on either the first or second team. You can probably guess their names. One rhymes with "Jim Zuncan" and the other is now known for his bow ties but was perhaps the most notable victim of the Big Man Bias that sullies the selection of Defensive Player of the Year (I mean, Ben Wallace four times?)

In 2005, 2007, and 2008, both Tim Duncan and Bruce Bowen made First Team All-Defense. You'll notice two of those years corresponded to Spurs championships, which in theory make them fertile ground for other awards, Finals MVP being the obvious one. So I bet if we dig deeper, we'll find even more hardware lurking in those magical odd-numbered seasons.

So, if you assign a point value to each major award and total them up from each season (I'm skipping mascot of the year and ESPYs and such, because I'm currently wearing my "What Would Pop Do?" bracelet), you'll get the following results in the Duncan era. Please note I'm using an entirely arbitrary points system that I will explain as we go along: 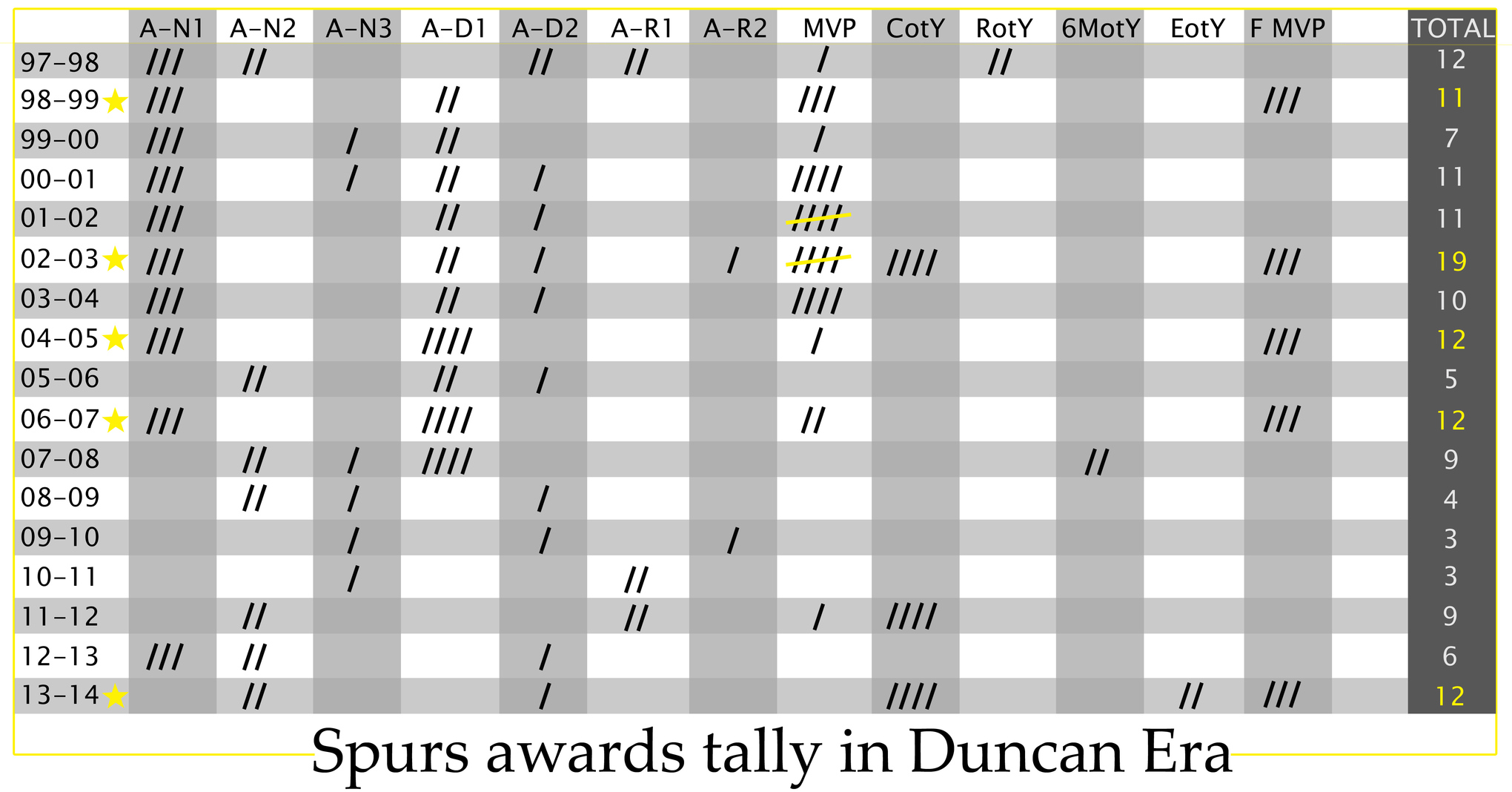 What does this tell us about which Spurs team is the greatest? Actually, very little. There's remarkable, but ultimately inconclusive, consistency across four of the five title years. The 2005, 2007, and 2014 squads all garnered 12 points, while the 1999 team got 11, mostly because the voters went with Karl Malone as MVP instead of Duncan. I should note that the championship teams having some of the highest scores seems intuitive, but is partly by design of my methodology, which in essence applies an additional 3 points through the Finals MVP award (the equivalent of a 1st team All-NBA selection.)

And, though the system is remarkably accurate at identifying (or is punishing the better word?) the Spurs teams which underachieved, like in 2009-2011, there are some weird outliers which further shake my faith in the correlation between awards and team success. Based on awards granted, the 2001-02 team was as strong as the '99 title team, and 1997-98 team both racks up as many points as the last three championship teams, even though the Spurs were eliminated in five games in the second round by the eventual Western Conference Champ in both 1998 and 2002. The 2012-2013 team also scores much lower than expected for a group which had two All-Stars and made a Finals run. Then there's the 2002-2003 team, which earns an astounding 50% more points than the next-highest Spurs team, thanks to Tim and Pop's awards and Manu's rookie team selection.

I'm going to bet a nickel right now that if I took a poll of 100 random Spurs fans, at least 75% of them would rate the 2003 team the weakest of the five title teams, or at least the most mediocre (with my personal definition of a "mediocre" NBA Champion coming because they won each series by 6 games and blew multiple fourth quarter leads). The other 25% would probably get hung up on the term "weakest." In this case, it doesn't mean the 2003 title run was the least memorable or meaningful or thrilling, what with the Admiral's victory lap and beating the Lakersand all that. I just think you'd have a very hard time finding anyone -- other than perhaps Stephen Jackson -- who'd tell you the 2003 team was 50% better than any of the four other Spurs championship teams. And Capt. Jack might not even stop at 50%.

Of course, the Spurs really aren't the best test case for measuring the relationship of awards to achievement. Our guys have always been bashful about recognition, and the media has been more than happy to oblige them their low profile. Maybe the system sorts out the best teams in other years.

So real quickly, let's look at these same standards applied to three of the greatest teams of all time:

I think that's a much more revealing look into the value of awards. Sure, the '97 Bulls weren't as good as the 72-win team, but they definitely were more than half as good. And maybe the '01 Lakers team wasn't as accomplished as that '72 team, maybe they coasted during the regular season and could never have won 33 straight. But no one -- not Russell's Celtics, not Wilt and West's Lakers, not Jordan's Bulls, and, I think even we can all agree, not the 2003 Spurs -- dominated the playoffs as thoroughly as the Lakers did that year. The award roster simply does a bad job of reflecting that dominance, just as the '96 Bulls awards roster overvalues that team. Yes, they won the most games in NBA history and led the league in both offense and defense. But they also put the league (and the country really) under a spell in a way no other team ever has or likely ever will. And they did all of that while facing weaker competition than the '86 Celtics. There's certainly a case to be made that Boston was slightly better in '86 than Chicago was in '96, despite garnering fewer awards.

Where does that leave the 2014 Spurs? Should they have gotten more awards than they received? If they had, it would've been a poor reflection on the nature of the team. More than any other champion in modern NBA history, the '14 team came together as a team, a multi-faceted basketball hydra with a collective intellect which defies convenient narratives. While a regular-season MVP award or All-NBA 1st Team selection might help such a team be better represented in the ranks of the all-time best, more awards wouldn't represent the 2014 Spurs and what they actually accomplished.

Look at it this way: these Spurs, a team with only one All-Star, no 1st Team selections, no 20 point per game scorers, and nobody in the top 10 in MVP-voting, defeated not only the 2014 MVP on its way to the championship, it defeated the winners of six of the past eight MVP trophies. Outside of the Larry O'Brien trophy, handing out yet more awards to this team would be missing the point they spent an entire season making.

What's the take-home from this exercise? This year's Spurs were the best ever, but don't look to awards or accolades to prove it. We're going to need our collective memories and videos like this one to honor its legacy. I can only hope someone like me doesn't come along in twenty years, scouring the records of awards handed out to past champions, and conclude that the 2013-14 Spurs were anything less than special.

Because no matter how hard you try, this Spurs team resists being categorized, it defies traditional rankings and classifications, it goes it's own way. And that's much more valuable and enduring than any award.