What are the fundamentals of Tim Duncan?

Tim Duncan's brilliance has been evident from the beginning. But only now, 17 seasons and 130 teammates later, are we truly beginning to appreciate the breadth of that brilliance.

Share All sharing options for: What are the fundamentals of Tim Duncan?

I own several objects which I consider somewhat sacred. A ten year old Cake t-shirt I bought the night I saw my favorite band in St. Petersburg, FL; the collection of license plates I have been amassing since childhood, which includes all fifty U.S. states and four Canadian provinces; my wedding band ("Then why do you lose it so often?" - Mrs. Oldmanshirt). For a long time, this monochrome paper program from an October 16th preseason game between the San Antonio Spurs and Washington Wizards in 1997 was not on that list. But it should have been, and for a very particular reason. That night was the first time a certain Wake Forest rookie put on a home white Spurs jersey in an NBA contest.

Basketball-Reference.com lists one of Tim Duncan's nicknames as "Death and Taxes." Whether this is an actual name someone has given him, or an Onion-style tongue and cheek attempt at humor by the otherwise robotic number crunchers at Basketball-Reference, it is not a Duncan pseudonym with which I'm familiar. I can, however, remember when he went by the handle "Merlin." Since this was Duncan's de facto nickname in October 1997, it was somewhat fitting that his first game in front of an Alamodome crowd was against the newly-minted Wizards.

Perusing the rosters within the program, I see a few obviously familiar names on both teams. Some I know and remember well, even though they're long gone as NBA players. Some I had forgotten, like Carl Herrera or God Shammgod. Other names just look weird to me. Instead of Will Sevening, John Andersen is listed as Spurs head trainer. There's no Chip Engelland on the assistant coach list, though Mike Budenholzer is there, presumably having just completed puberty. Popovich is there, of course, as was R.C. Buford, but back then, they weren't yet the Pop and R.C. we know and love today. As evidence, I look at the number of foreign names on the roster, and observe that every player who suited up in white that October night went to an American college. These were the days when Jay Howard called the game on the radio, and the strangely soothing tones of Stan Kelly introduced the starting lineups, and when a draft pick from the Virgin Islands seemed downright exotic.

Even the mighty B-R database doesn't have any stats or results from that preseason game. However, the program indicates the Spurs had gone 3-0 in the preseason up to that point, so it's reasonable to surmise that they handled Chris Webber and Company. Honestly, the result of the game didn't matter. San Antonio had taken what was already a fringe Championship contender and added a legend in the making. Even seeing a 21-year old Duncan, the tips of his toes just barely beginning his NBA experience, it was miraculous how complete and fluent he already looked. Much as that might be attributable to Merlin's four years of ACC hoops experience, it was evident something more was at work, something entirely intangible yet stronger than anything physical. Even after seventeen years, all I can conclude is that there's a good reason Tim Duncan's success and longevity aren't really a surprise. At least, they shouldn't be.

To be sure, Tim's career hasn't been injury-free. He's had to adapt his body and his game against the undefeated force of entropy. Whether its used in appreciation or as a pejorative, "fundamental" is the most appropriate word to describe the man. Fundamentally, Tim hasn't changed. In the absence of an objective explanation for the consistency, I'm forced to deal in raw statistics. This, too, feels somehow appropriate, given Tim's straightforward approach to the game. Of all the statistics, one stands above the rest: 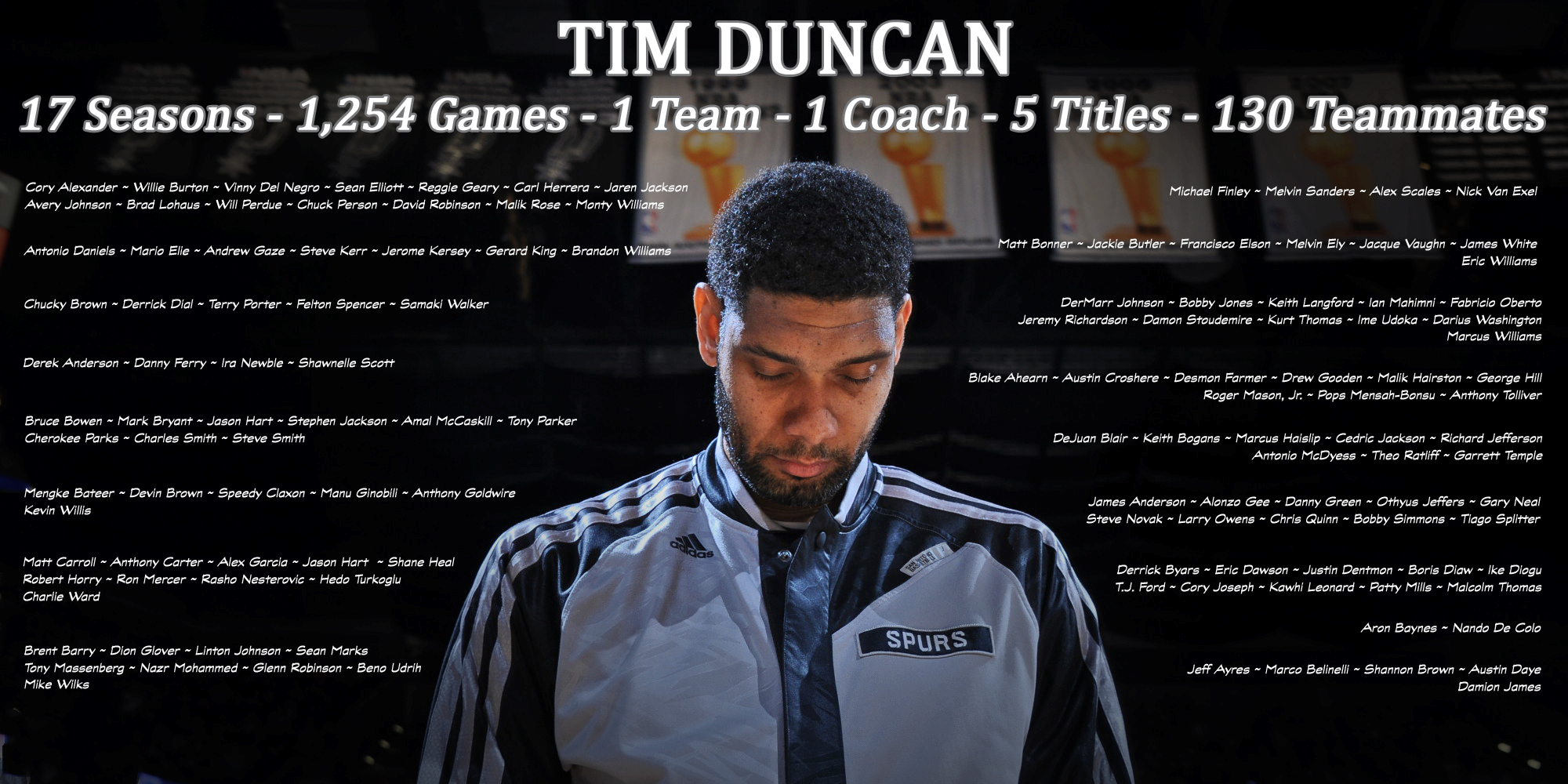 As of Father's Day, 130 people can claim to have played on the same team as Tim Duncan. Some, like David Robinson, had a tremendous influence on his career. Others, like Shannon Brown, were brought in on ten day contracts to plug holes in the roster during times of injury. His teammates have included Jerome Kersey, who turned 54 last month, and Cory Joseph, who turns 23 next month. During their own careers, Duncan's teammates won championships with Jordan's Bulls, Hakeem's Rockets, and the Shaq and Kobe Lakers. Others lost title bids with Clyde Drexler's Blazers, Ewing's Knicks, Webber's Kings, Nash's Mavericks and Nash's Suns.

If that's not enough perspective for you, consider this: Tim Duncan won championships with the #11 pick of the 1984 NBA Draft, and the #15 pick of the 2011 NBA Draft. Yep, Kevin Willis, who was a contributing member of the 2003 Title team, was a lottery pick seven years before 2014 Finals MVP Kawhi Leonard was born. Many of his teammates have gone on to successful basketball careers after their playing days ended. One former teammate is now a head coach in New Orleans, another just signed a $25 million contract to coach in Golden State, another is General Manager in Atlanta, one is an analyst for ESPN, and another for NBA TV, two former teammates are currently assistant coaches in San Antonio.

Much is made, and rightly so, about Pop's "Coaching Tree" enriching the benches and front offices of teams all over the league; but how many coaches, executives and analysts gained the invaluable insight into the game that furthered their own post-hardcourt careers, while playing, practicing and preparing next to Tim Duncan?

Recently, Tim went on David Letterman and talked glibly about the Spurs drafting players "Whose names I can't pronounce." During the playoffs, stories circulated about him withholding verbal communication from the rookie Tony Parker and other new recruits. I feel like I understand that now.

This guy has had, on average, just over seven new teammates every year for 17 years. Some he will always remember, and some he'll have forgotten just like all the rest of us (Alonzo Gee, anyone?) Tim Duncan, of course, will never be forgotten. Nor, I suspect, will many of his former teammates look on their time as a member of a Duncan squad with anything less than the reverence I now hold for this program.

The old program itself is only a piece of paper with a list of facts on it, and if paper and facts are your basis for analyzing the career of Tim Duncan, or any legend, and determining that they fall short of this player or that player --that's an approach you're free to take. But what this paper represents is an inflection point, the foundation upon which a broken franchise reinvented itself.

A fledgling coach built a Hall of Fame career, players both ambitious and accomplished reached heights they'd only dreamed of, and potential was realized. It's a potential which was evident from the moment number 21 stepped onto the Fiesta-colored floor of the Alamodome back on October 16, 1997. That was the beginning.

We are not yet close to the end.