Could anything improve on the Spurs' appearance on SI's cover?

Share All sharing options for: The image that Sports Illustrated should have used for the Spurs's cover

You might have noticed that the Spurs made the cover of Sports Illustrated after clinching the franchise's fifth NBA Championship. Ben Golliver describes the image as Kawhi Leonard, "in the classic superstar's pose - above the rim, fearlessly preparing to detonate." And that's a pretty accurate description, as you can see. 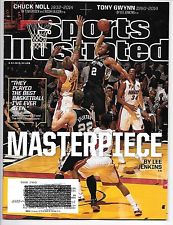 I think it's a gorgeous image and it would be difficult to find a better one. The Spurs thrummed the Heat, winning in record fashion, and that image does a great job of communicating the story of the entire series. What's more, Leonard threw down a number of seriously impressive dunks in the Finals and it's a great idea to commemorate one of them.

The only problem is that cover image isn't one of them, a fact pointed out to me by J.A. Sherman, editor of Welcome to Loud City. The image at the top of this page shows what happened a split second after the moment immortalized on the cover of SI. Chris Andersen fouled Leonard which resulted in free throws, not a massive dunk. And this started a conversation between Sherman and me.

This is not to nitpick -- like I said, I like the image and the cover looks great just as it is -- but if that photo were to be replaced, what should take its place? Once again, Sherman had the answer: motion.

There's no other way to capture the beauty of the offense that the Spurs played last season, except through an entire play. And what easier way to deliver plays than with a GIF? So here's what Sherman created as an alternative cover choice.

What better choice than a play in which all five players touched the ball? Although this GIF doesn't include Leonard's pass, you get a great idea of the way the offense moved the Heat around and opened lanes to attack it. I love the little captions that Sherman added -- especially, "That escalated quickly" -- and the way it looks like the quote from Tony Parker was in response to (and a correction of) the quote from Chris Bosh.

In fact, the only thing that could have improved this, is if Ray Allen hadn't shoved Manu Ginobili so that he could've finished in a more aesthetically pleasing way. But all-in-all, I think I'll take it. Thanks, Sherm.