A Portrait of Aron Baynes

The fourth in a series of profiles on each member of the 2013-2014 San Antonio Spurs.

Share All sharing options for: A Portrait of Aron Baynes

Aron Baynes, a.k.a. "The Big Banger," is a man of idiosyncrasies. An ironic paradox. A jumble of contradictions, all wrapped inside a funny accent. 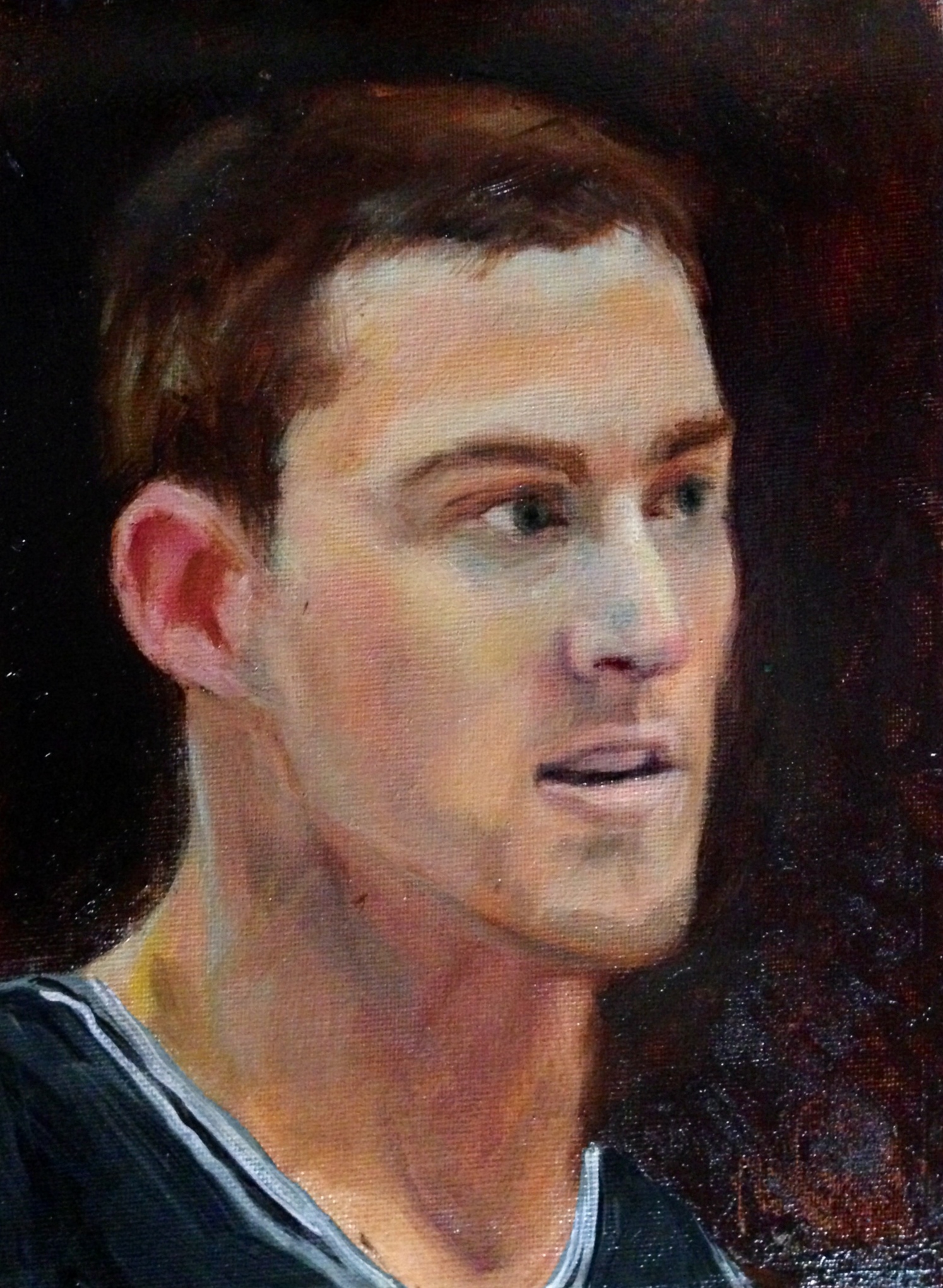 He looks like an absolute brute, but isn't too much of an enforcer. He's a musclebound lug, but he has the best hops of any Spurs big man and can absolutely cram it on people. He's got those hops but hardly ever blocks a shot. He can't throw it into the ocean, but he led the club in free throw percentage. He hardly ever plays, but averages a double-double per 36 minutes. He's the best offensive rebounder on the club, but has trouble finishing around the basket.

Baynes has been a Spur for two seasons now and it's still difficult to know what to make of him. To tell you the truth, I'm not sure if even Gregg Popovich knows. Baynes has played in just 69 regular season games over the past two seasons plus 18 more in the playoffs, and those were mostly scant, garbage-time minutes. He received 15 or more minutes just 13 times in the entire 2013-14 season (a year in which Tiago Splitter and Matt Bonner both missed significant time with injuries, mind you) and just one of those came in the playoffs.

In those 13 games he averaged 7.2 points (on .518 shooting) and 6.0 rebounds in 17.8 minutes, which works out to 14.5 points and 12.1 rebounds over 36 minutes. Of course, with the way he racks up fouls, the odds of him ever making it to 36 minutes is kind of a moot point. Banger's a guy whose value shines best between 15-20 minutes a night, but one whose various limitations make it almost impossible to use him in that role over the long haul. Can he play against small lineups? Can he be counted on to stay healthy? Can he ever, ever challenge a shot on defense?

The real enigma with Baynes is whether he's a genuine asset to the Spurs (someone who actually contributes to the cause and has actual potential to do even more in the future) or if he's just a dude who benefits from playing with a host of talented teammates who help to make him look far more serviceable than he otherwise would. Certainly by the eye test Baynes looks like he can play, hold his own against anybody, and that he can be particularly useful when playing with the first or second team guys during meaningful stretches as opposed to third-teamers playing out the end of a game.

So we're left with not only wondering whether Baynes is worthy of a roster spot next year and beyond, but even what his role should be if he makes the roster. Is he the 13th man? The 10th? The 8th? Should Pop experiment with him starting? Okay, probably not, but more because of Splitter's salary -- and now, I suppose Boris Diaw's as well -- I'm genuinely curious what Baynes' ceiling is, both with the Spurs and elsewhere.

I'm more ambivalent about him than any Spur in years, honestly. In some ways he's redundant to Jeff Ayres and brings similar strengths and weaknesses. Except I also think that Ayres is already everything he'll be, while Baynes has an outside chance to improve a bit. But then I'm reminded of the fact that Ayres is actually younger, has a better jumper, more advanced passing skills and can, you know, block a shot now and again. Also, Ayres is already signed for the next season, so it's not a direct either/or scenario.

The third in a series of profiles on each member of the 2013-2014 San Antonio Spurs.

More likely than not, Baynes' role on the Spurs, if there is one for him next year, is to be a guy who plays if/when Splitter is injured or Duncan is being rested. He's the guy they actually favor starting and giving good minutes to when people are hurt, but not playing spot minutes as the fifth big. Rather he swings somewhere between fourth and sixth on the totem pole but never fifth, which is exactly where Ayres finds himself entrenched.

It's similar to the Cory Joseph/Patty Mills conundrum, actually. Mills is Ayres, the bench guy with the steady gig, while Joseph is Baynes, the guy who doesn't play as often but gets a bigger role when he does. Man, I don't know. It'd be so helpful if he just got demonstrably better or worse next season so I knew exactly what to think.

I suppose I want him back.

(Of course, if Pau Gasol had chosen the Spurs instead of the Bulls, I'd have forgotten all about Baynes in a millisecond.)