A stranger in a strange land chronicles his first few days in San Antonio.

Share All sharing options for: Arriving in San Antonio

I've spent the past week uprooting my life and moving to your humble burg, for the purposes of covering our merry band of noble basketballers. The mission has been anything but simple. The roads have been long, dusty and mostly empty. 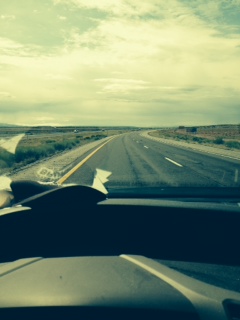 The pilgrimage from California took three days and sadly, there were some casualties. Colorful, suicidal casualties. 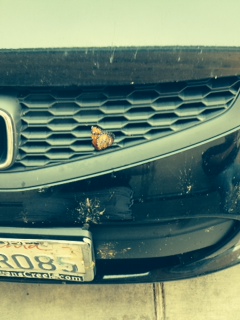 Tthe first task is to find a place to live. After that is furniture, setting up the satellite, buying appliances, and oh yeah, finding a day job to pay for everything.

One fun thing we did on the way over was to stop at the famous "Big Texan Steak Ranch" in Amarillo. The gigantic restaurant's novelty --besides having a bunch of cute waitresses wearing tiny cowboy hats-- is "The Big Texan Challenge," where if you can eat a complete 72 oz steak dinner with all the fixins (including three fried shrimp) you get the meal for free. If you can't finish it all by yourself in less than an hour, you pay the $72 bill.

They put you on a stage in front of the entire restaurant with giant electric stadium style time clocks while you're eating too, so your gluttony is the show within the meal. 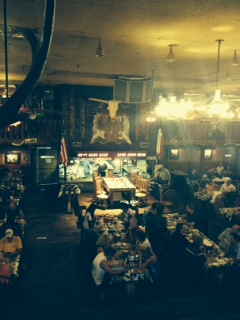 Some professional competitive eating lady who weighs all of 125 pounds broke the restaurant's record, devouring the entire meal in four minutes.

Then she had seconds, doing it all again in 11 minutes.

I can't wrap my mind around it but I'm gonna check YouTube to see if there's any video.

No I didn't try it. (The salad would've been the deal breaker.) Truthfully I was tapped out after my 24 oz ribeye and I'm a big dude. I have no idea how anyone can do it.

Some dude did try though (below) but he tapped out with 15-20 ounces of steak left. 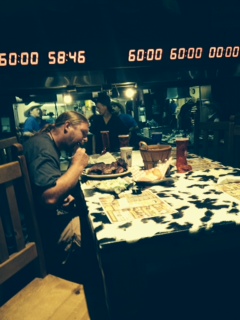 In short "The Big Texan" was the perfect welcome to your state. I think I'll fit in fine... eventually.

Anyway, I think I've found a place in an ideal location in San Antonio, between the Spurs stealth underground bunker practice facility and the AT&T Center, but I won't know for sure until the rental lady verifies my info with past employers and landlords and such. I'll know by Monday or Tuesday. If it doesn't go through, I'm in a mess, so happy thoughts.

The tentative plan is to go up and down the River Walk on Monday. Depending on what goes on with the apartment, I'll try the gigantic mall later in the week. There are so many restaurants in this town, somebody is bound to hire me eventually, right?

The Spurs portrait series will continue this next week and if anything else major comes up I'll write about it, but in the mean time you're in the capable hands of the other fellas like J. Gomez, Chris Itz, et al.

Here are some initial impressions of San Antonio...

1. The weather is ridiculous, but I was prepared for that, on some level. I knew it'd be hot. I've been buying plenty of water, though not Fred Water, yet. What is Fred Water? Is it bottled by someone named Fred? Is it only for people named Fred? That doesn't seem profitable. Maybe our own Fred can clarify this for me. 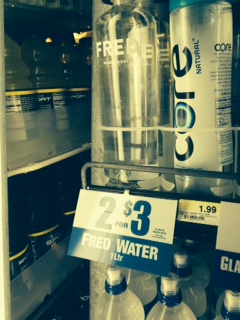 What I wasn't prepared for, however, were the thunderstorms. We don't really have those in California and they're scary. It sounded like God was on the drums outside of my hotel room the other night and the lightning was so bright that white flashes lit up my room even with the blinds pulled. If I was outside when this was going on I probably would've peed my pants.

2.  Whoever designed your roadways deserves a fate much worse than anything George R.R. Martin could imagine. Just ramps upon ramps upon ramps. It reminds me of my childhood before computers where we'd have to type out our papers or do them on word processors and whiteout had to be used in abundance. That's all the San Antonio freeway system is, a massive "whoops, my bad," by the City Planner.

When I think I have to make a left, I actually have to take the turnaround. When it take the turnaround, it turns out I should have taken a left. I get it wrong every time, it's uncanny. Until this past week, the concept of "make a U-turn on the freeway" was foreign to me. I always thought that if you take an exit and make an immediate left to get back on the highway in the opposite direction you do it because you've made a mistake, not because it's actually what you're supposed to do. But in San Antonio there are these sub-highways right next to your highway and it freaks me out. And finally, there are all these merges left from one freeway to another. That's just weird, man. I'm not sure if I'll ever get used to that.

3. Say, did you know that your city is quite popular with tourists this time of year? I was kicked out of my hotel room in the morning and told they were all booked for Saturday night. I had to pack everything in my car instead of leaving some stuff in the room as I'd planned. 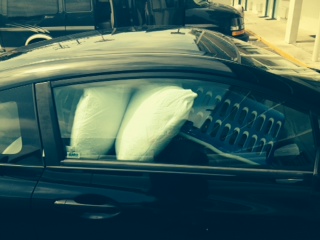 An hour spent calling pretty much every other motel in the city produced similar results. No rooms under $100. As a consequence I am now staying in dusty, Hondo, Texas.

"What's there to do in Hondo?" you ask. Nothing I could find. There's not a movie theater for 20 miles. I am streaming the Spurs game from my laptop on a Saturday night. Or at least I was before  the internet crapped out on me. Not enjoying Hondo, though I did make my first purchase for the home there, a huge plastic drinking glass from Hermann & Sons steakhouse. 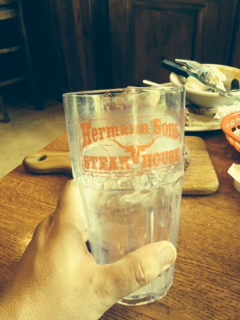 4. Yesterday as I was walking up to my room, I was solicited by a lady of the evening (not pictured), which was shocking at the time but seems kind of awesome in retrospect. I mean, I was at a Motel 6. Is that the kind of thing that happens regularly or only during tourist season? Anyway, I politely declined.

5. Whataburger is good. Oh man, it's soooooo good. And the employees there are friendlier and more polite than any fast food chain I've ever been too. Just about everyone in the city has been exceedingly polite, really. I think what I'm trying to say is I hate Whataburger for existing because it's just another vice I'm gonna have to kick.