Matt Bonner's re-signing went down with the subtlety and efficiency that have characterized his tenure with the Spurs these last eight years.

Share All sharing options for: Ginger Daps: An Appreciation of Matt Bonner

When word spread last night that the San Antonio Spurs would be bringing back Matt Bonner on a one-year veteran minimum deal, the earth didn't shake. There were no breathless commentators discussing the ramifications of the move for the league. The news was relegated to small blurbs in various NBA free agency update posts, if indeed it was mentioned at all. Matt Bonner's re-signing went down with the subtlety and efficiency that have characterized his tenure with the Spurs these last eight years.

We like to look at a team's balance and talk about how to categorize the players. Who provides the team's "heart"? Its "fire"? The intangible essence of true competition is boiled down to on-court characteristics and quirks. We do this (usually in the offseason) with full knowledge of the complex realities of what makes up a team. The Spurs have a clear leader in Tim Duncan, but if they only had one heart, they'd have died a long time ago. The truth is, the franchise has endured as a model of competition and success because it held on to players that share those intangibles. Manu Ginobili's zeal for the game is shared by Patty Mills in his exuberant bench celebrations as much as it is by Kawhi Leonard in his quiet, stone-faced highlights. Nebulous traits like "heart" and "fire" only really matter if the whole team adopts them and makes them concrete.

This is important to point out because for all of his career, most of us have missed the way Matt Bonner exemplifies these traits. Indeed, in his own quiet way, Matt Bonner has been the quintessential Spur, affable and gracious, humble and committed, eager to grow and learn. He's been shuffled in an out of lineups, been barked at from coach and fan alike, and stretched as a player even as he's stretched opposing defenses. And he's done all of it with a grin and a dry joke waiting in the wings. 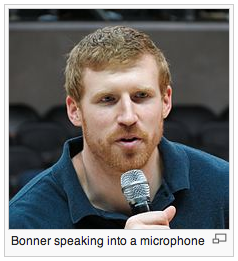 This is an actual screenshot from Matt Bonner's Wikipedia page. h/t David

In retrospect, Bonner seemed destined to join the Spurs, starting his career as a second-round selection in the 2003 draft with a year stashed overseas before making his NBA debut. Bonner spent two years on the Toronto Raptors before being traded to the Spurs the summer before their fourth championship.

It's easy to overlook what Bonner has meant to the Spurs. Averaging a tidy 16.6 minutes over his eight seasons in San Antonio, he's never averaged double-digit scoring or more than five rebounds a game. But like many of the team's key role players over the years, Bonner excels in one thing without necessarily killing you anywhere else. The Spurs have, for most of his tenure, placed him in a position to succeed. As you know, Bonner was blessed with hands of fire, and his presence on the court helped contribute to the transformation of the grinding, post-centric Spurs of the mid-2000s into their breathtaking present-day, spacing-obsessed incarnation.

But fans have been slow to recognize what the Spurs have in Bonner, player and person. In 2011, that lack of appreciation among fans flipped into outright vitriol as Bonner became the goat for a team that had clear frontcourt issues. Bonner played over twenty minutes a game in those playoffs, the most he's ever averaged in his career, and was given the unenviable task of trying to stop the peaking Zach Randolph. Bonner was pushed around, but it was less about Bonner's struggles than it was the team's depth getting exposed. The Spurs knew all along what they had in Bonner, but the team was not constructed to provide a formidable challenge to a front court like the Grizzlies'. That, coupled with a key injury to Manu Ginobili, was too much for the Spurs to overcome, and they were knocked out in the first round, an unthinkable outcome for the West's top seed that season.

Among Spurs fans, the anger was palpable, as message boards and blogs erupted with the frustrations of people who had forgotten what it felt like to wait more than four years between titles. It's hard to think of a player on the team who bore the brunt of that more than Bonner did. The guy who started out as an offensive quirk on an evolving roster had transformed into the symbol of misdirection in the eyes of an increasingly vocal contingent. (I don't mean to overstate this. You can find clear examples of this as nicknames like "Winter Shoes" – and, yes, "Mudbutt" – were trotted out for even the smallest of court appearances from Bonner.) It no longer mattered that Matt Bonner once got under Kevin Garnett's skin or that he had helped develop a fantastic web series.

There's an irony here that should be pretty apparent to some Spurs fans. Many of the people who expressed outrage that the national media could be so preposterous as to miss the subtlety and charm of the Spurs are the very same fans who have looked at Bonner and missed his utility and ignored his wit.

That last part - not getting to appreciate who Matt Bonner is - would've been the worst crime of all, but thankfully, we got to experience the unexpected renaissance of Bonner's 2013 season. It's difficult to find exactly when it started, but at some point, people began to see him differently. Maybe it was Tiago Splitter's emergence. Perhaps it was Kawhi Leonard's promise. In any case, as the front court transformed into a formidable beast, there was less pressure on Bonner to excel in areas where he struggles. And with the room to breathe, Bonner became a fan favorite, something inconceivable just a season and a half prior. Bizarrely, it was Kobe Bryant who really got things going last year while live-tweeting a viewing of his 81-point game against the Raptors in 2006.

.@DrinkGT @Scalabrine @nikebasketball The white mamba wasn't in the building but the red mamba was...Matt Bonner

Things only got better from there for the newly monikered Matt Bonner. Due in large part to the success of a fan-led #LetBonnerShoot campaign, he went on to participate in (and nearly win) the three-point shootout at All Star weekend. In his off time, he formed a nonprofit organization with his brother Luke, hosting a concert event at South By Southwest featuring teammate Stephen Jackson. And perhaps strangest of all, he stood his own against Dwight freakin' Howard with a combination of inexplicable floaters and self-described "Chumbawamba defense," as the Spurs swept the Lakers in their march to the 2013 Finals. It was a joy to watch, as Bonner and Spurs fans exhaled together during a postseason of renewed promise. That he finally secured a shoe deal months later was icing on the cake.

In his tenure with the Spurs, Bonner has twice reached the zenith of NBA glory. In between those two seasons he's endured the heaviness of unfulfilled fan expectations and his own personal disappointments in nearly a decade spent in the Alamo City. As much as anyone on the roster, Bonner's experience since 2007 illustrates the team's journey to once again rise as champions. His latest contract is not the stuff legends are made of, and nobody is pretending otherwise. But if the past eight seasons are any indication, one year at the veteran minimum for Matt Bonner – floor spacer, Fluffernutter enthusiast, Free Bird – will end up being the greatest of offseason bargains.