Tim Duncan and Tony Parker missed four straight free throws late in the game and Manu Ginobili seemed to be trying just a bit too hard down the stretch. But for the Spurs to have a chance at the title, Kawhi Leonard will have to show up.

Share All sharing options for: Kawhi Leonard wasn't there

Sometimes the symbolism of an event isn't immediately obvious.

During Game 2 of the NBA Finals against the Miami Heat, the Spurs struggled from the free throw line, from an absence of points in the paint and from suffocating defense by the best player on the planet and his friends. Those facts helped Miami escape with a two point win, wresting home court advantage away from the Spurs and leaving behind a profound sense of unease in Spurs fans as the Heat boarded their charter flight to take their talents back to South Beach.

In post-game press conferences, Manu Ginobili and Tony Parker were asked about late turnovers and struggles at the free throw line, respectively. Ginobili said on his errant pass to Duncan late in the 4th he'd been poked in the eye which caused him to lose track of the play for an instant and that he probably threw the ball too hard into Duncan after regaining his bearings.

Parker simply said he was frustrated that he'd missed the two free throws after the flagrant foul by Mario Chalmers, but also expressed frustration with his--and his team's--performance down the stretch.

For his part, Tim Duncan also looked frustrated during stretches of the game, even as he posted his 157th career playoff double double, tying Magic Johnson for first all time. He missed a short put back just before halftime and was noticeably disappointed in the lost opportunity. His reaction and body language at the time seemed extreme, but proved to be prescient as that miss combined with a 12-20 showing from the free throw line for the Spurs made up for more than the difference in the final score.

But the real concern for the Spurs has to be the man who wasn't there.

Kawhi Leonard has been in foul trouble early in each of the first two games which effectively renders him helpless. After picking up his first foul early in Game 2 on what appeared to be not much more than incidental contact with James, Leonard slowly started to dissolve into irrelevance before our eyes.

Known for his apparent aversion to speak and often appearing to have had his emotions programmed into his circuit board while attending San Diego State, Leonard's most emotional outbursts often come after picking up a foul. He knows how important it is for him to be on the court, matching James minute for minute, and it's simply not possible when he gets two fouls early in the first quarter--or three before halftime.

To make matters worse that sense of letdown carries over to his offensive game where he forces shots and seems to struggle to find any type of flow. He was able to hit two timely three pointers on Sunday, but his continued inability to cash in on 10-12 footers or shots inside the paint is alarming.

Then in the third quarter, with Kawhi again on the bench--or assigned to anyone other than James to avoid additional fouls--LeBron showed why he is the best player in the world. With Boris Diaw attempting to guard him, James would dribble around the perimeter, wait for the shot clock to wind down, and launch a jumper from the left side of the key. That particular offense can most often be seen in a 5th grade summer tournament:

Give the best player the ball. Dribble aimlessly. Shoot. Repeat. 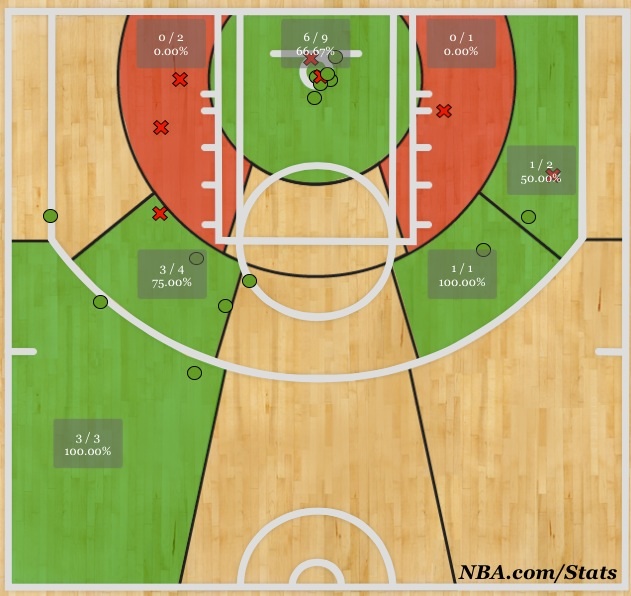 It's not supposed to work in the NBA, but it did in Game 2 as James put on a dizzying shooting clinic without Kawhi Leonard to worry about.

So to put it in the bluntest of terms, Kawhi Leonard is going to have to figure out a way to be there if the Spurs hope to win this series. Gregg Popovich will likely experiment in Game 3 with Danny Green guarding LeBron from the jump or possibly inserting Diaw into the starting lineup, but the Spurs must figure out a way to keep Leonard's foul total low enough so that he can be around in crunch time. No one on earth can completely shut down LeBron James, but for the Spurs, Kawhi Leonard is their best hope.

After the coach's press conferences prior to the game on Sunday I grabbed a quick bite to eat and then went to the locker room's of both teams. The Heat players each sat in their lockers in complete silence. All wore head phones and most stared at their phones, particularly Chris Bosh who impressively never acknowledged the throng of reporters crowding his space, holding his phone out at almost arm length, staring into its screen with fierce intent. After a few minutes James came out of the training room to answer a few questions. He said he didn't exactly feel normal, but felt good enough to play.

From there I went to see the Spurs. Their locker room was much less crowded with only Danny Green getting dressed and Aron Baynes lying on the floor watching a replay of Game 1. I walked past a few cameramen and reporters and noticed Leonard's shoes sitting in front of his locker. His Finals edition golden Air Jordan's are spectacular and fitting for the man that many have crowned as the future face of the franchise.

I marveled at their brilliance for a moment before leaving to head back into the arena. Because as fantastic as his new shoes were, my lingering there any longer was pointless. Sure, the promise of great things to come was all around. The number "3" written on the dry eraseboard, the "Pounding The Rock" motto on the wall and those huge golden shoes laying on the floor, ready to be laced up.

But Kawhi Leonard wasn't there.