The Spurs' Big Three by the Numbers: Part 2 - Tony Parker

Share All sharing options for: The Spurs' Big Three by the Numbers: Part 2 - Tony Parker

The Spurs are rested, at home and extremely motivated. Here's your list of pre-Game 1 reading material.

The San Antonio Spurs and the Miami Heat meet again in a rematch of last year's NBA Finals, and we look at what has changed and what has stayed the same as Spurs fans cheer for a different outcome this time.

Tony Parker is the head of the dragon. His ability to penetrate, find the open man, and finish at the rim in traffic have been central to the Spurs system over the years. And while Tony may not always get the assist, or even the hockey assist, he makes San Antonio greater than the sum of its parts every time he is on the court. His spot on the All-NBA Second Team this season is well deserved.

By looking at standard box score stats throughout his career, the value that Parker adds to the Spurs can get lost in all the noise. So instead, I decided to slice and dice NBA lineup data beginning with the 2007-2008 playoffs.

Before we dive into the data, I would like to note that Tony Parker's stats from this season have been skewed due to injury and Pop's minute restrictions (no Spurs averaged more than 30 minutes per game in the regular season). In a team known for its balanced scoring, Parker has led with 17.2 points per game in the playoffs. However, his impact on the Spurs' offensive system extends well beyond the points. Parker's presence on the court really fuels his team's offense starting in the paint. In fact, he leads the leagues in drives so far in these playoffs, averaging 10.8 per game. There is no denying that he is the little prince of the paint, and he makes teams that do not respect that pay dearly on any given possession: 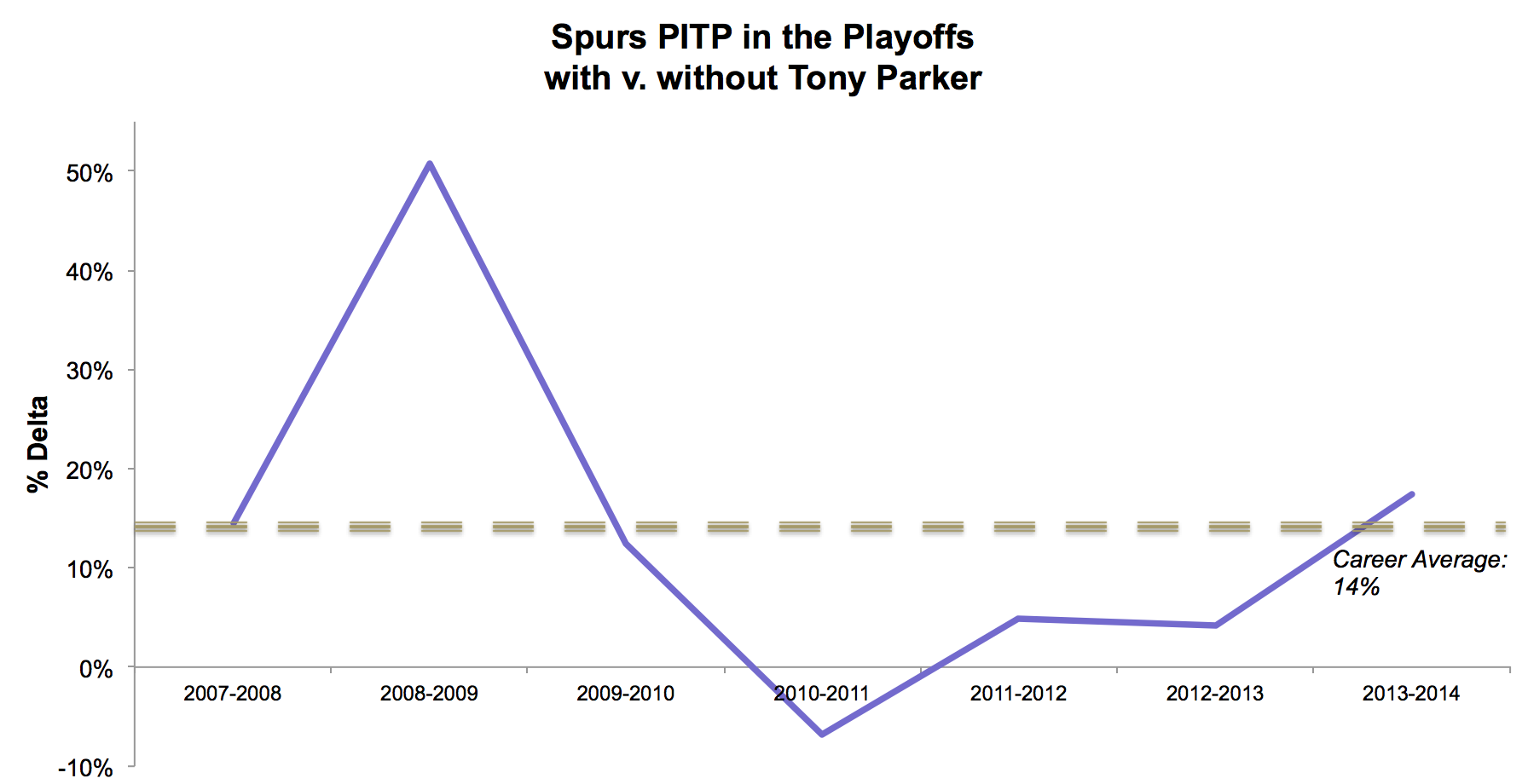 With the exception of the 2010-2011 playoffs that I would like to block out my memory forever, Tony's presence on the court really provides a great lift to the Spurs in the paint. (Please note that the big blip during the 2008-2009 postseason is largely because Manu Ginobili, the sixth man of our hearts, was injured.) After a few low seasons, Parker is back to being above his career average of providing a 14% lift to his squad when it comes to PITP when he is on the court. I would like to highlight that, though 57% of Tony Parker's field goal attempts have been in the paint this season, his impact does not just come from scoring. He also sets the tone for the Spurs' younger rising stars, who continue to attack on offense while Parker is on the bench.

During this year's playoffs, the Spurs are averaging 49.1 points in the paint for every 100 possessions that Tony Parker is on the court versus 41.8 points with him off the court. For context, the Miami Heat, as a team, is averaging 38.1 PITP during the current 2013-2014 postseason!

I will note that, since the 2007-2008 playoffs, 86% of the time Tony has been on the court, Timmy has also been out there. As a result, not all of the credit should necessarily be given to Tony, but he is undoubtedly a large part of the Spurs' success in the paint. And don't worry-Tim Duncan will get his own analysis soon.

Parker's penetration and emphasis on ball movement help his teammates get better shots. Though that can be hard to quantify, one objective measure of this is team field goal percentage: 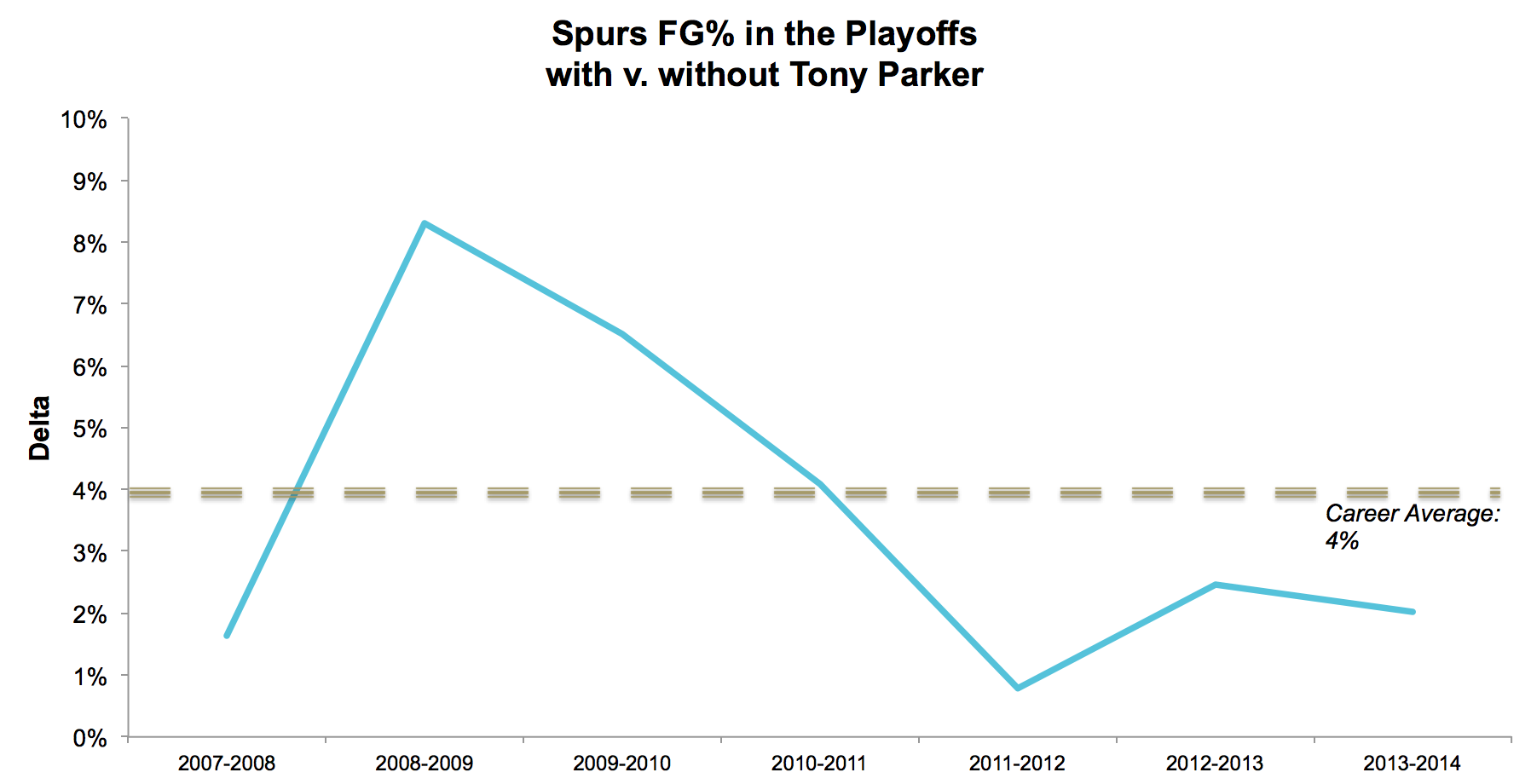 My main motivation for sharing the graph above is that I want us to appreciate the playoff career average delta of 4% that Tony Parker's presence on the court provides the Spurs. That is remarkable! As Buford, Pop, and Holt have assembled a world-class supporting cast to help the aging Big 3, the delta has reduced over time. However, this is not a bad thing. The emergence of Kawhi Leonard, Danny Green, and Patty Mills definitely has something to do with it.

So, at a high level, Tony makes the Spurs system work. What makes the story more interesting is actually Parker's influence on Ginobili's game. But before I go down that rabbit hole, let's remember that though the Spurs' Big 3 have remained in tact for over a decade, the team around them has changed over the years. You see that a bit with the rotations that Pop runs. Manu spent upwards of 80% of his minutes with Tony in the 2007-2008 playoffs versus around 60% this postseason. This is reasonable since, over the years, Ginobili has become the commander of the Spurs' second unit. If lineup data went back further, this trend would be even more dramatic: 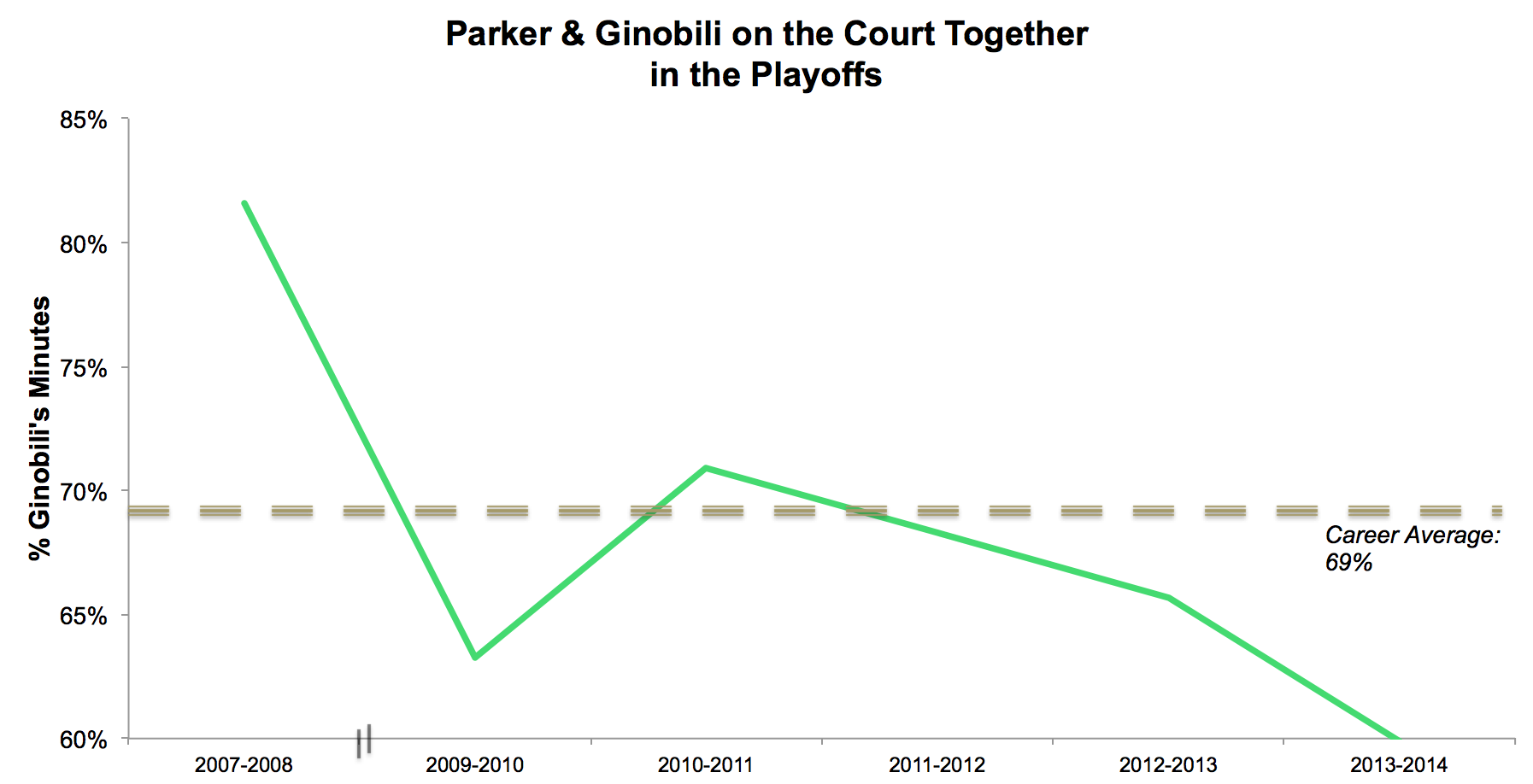 The one thing that drives us all insane about Manu is the turnovers! Though we have come to accept the crazy with the sensational, Tony Parker has really helped in this department.  If you take out the terrible outlier known as the 2010-2011 playoffs, the career % delta becomes a much more eye-catching -14% when Manu plays with versus without Tony: 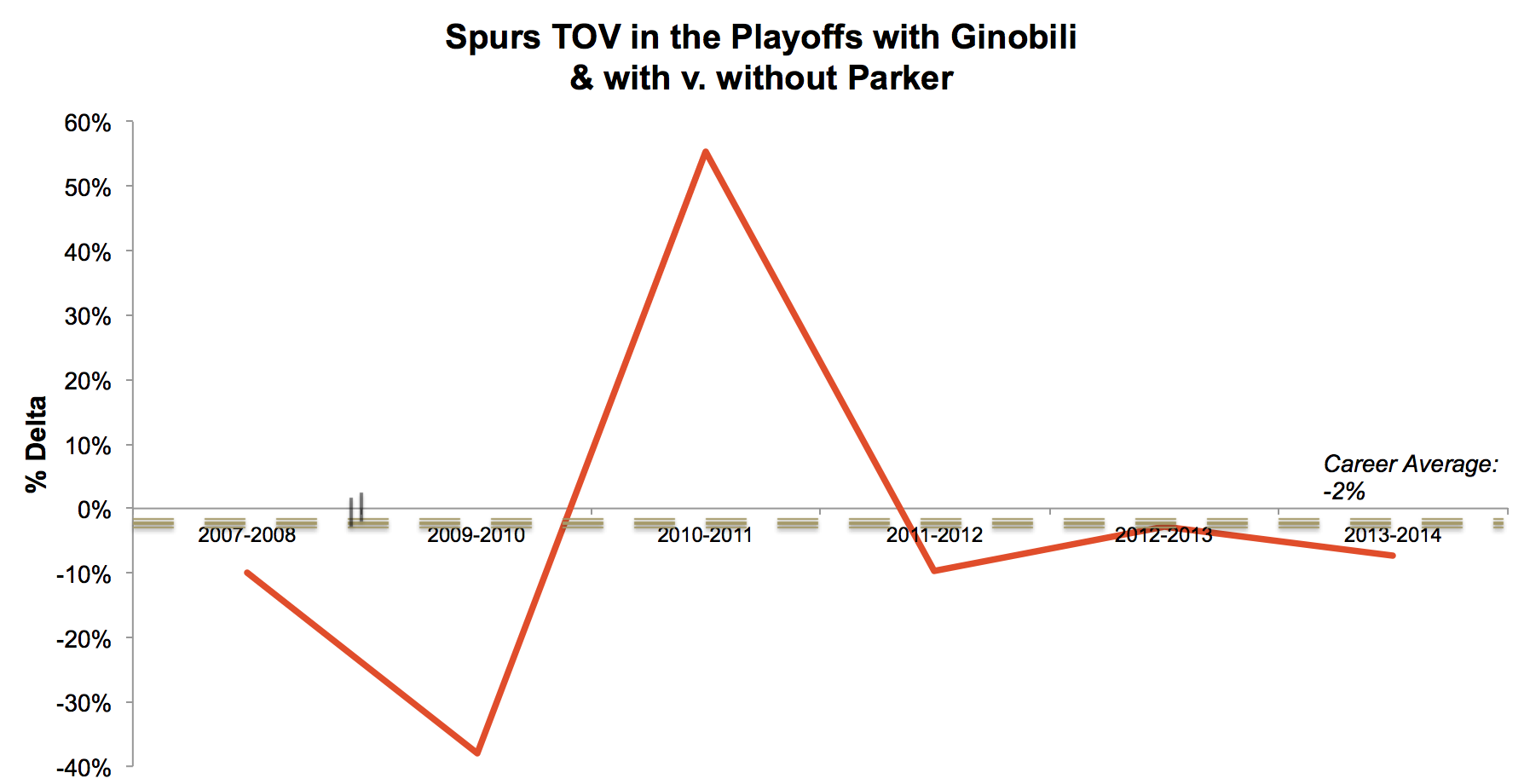 In addition to helping with turnovers, Parker's presence also alters Ginobili & Co.'s shot selection, particularly when it comes to 3s. (Please note that the spike in the graph is likely due to variations in lineups since Tony Parker only started in 2 of the 10 games that he played during the 2009-2010 playoffs.): 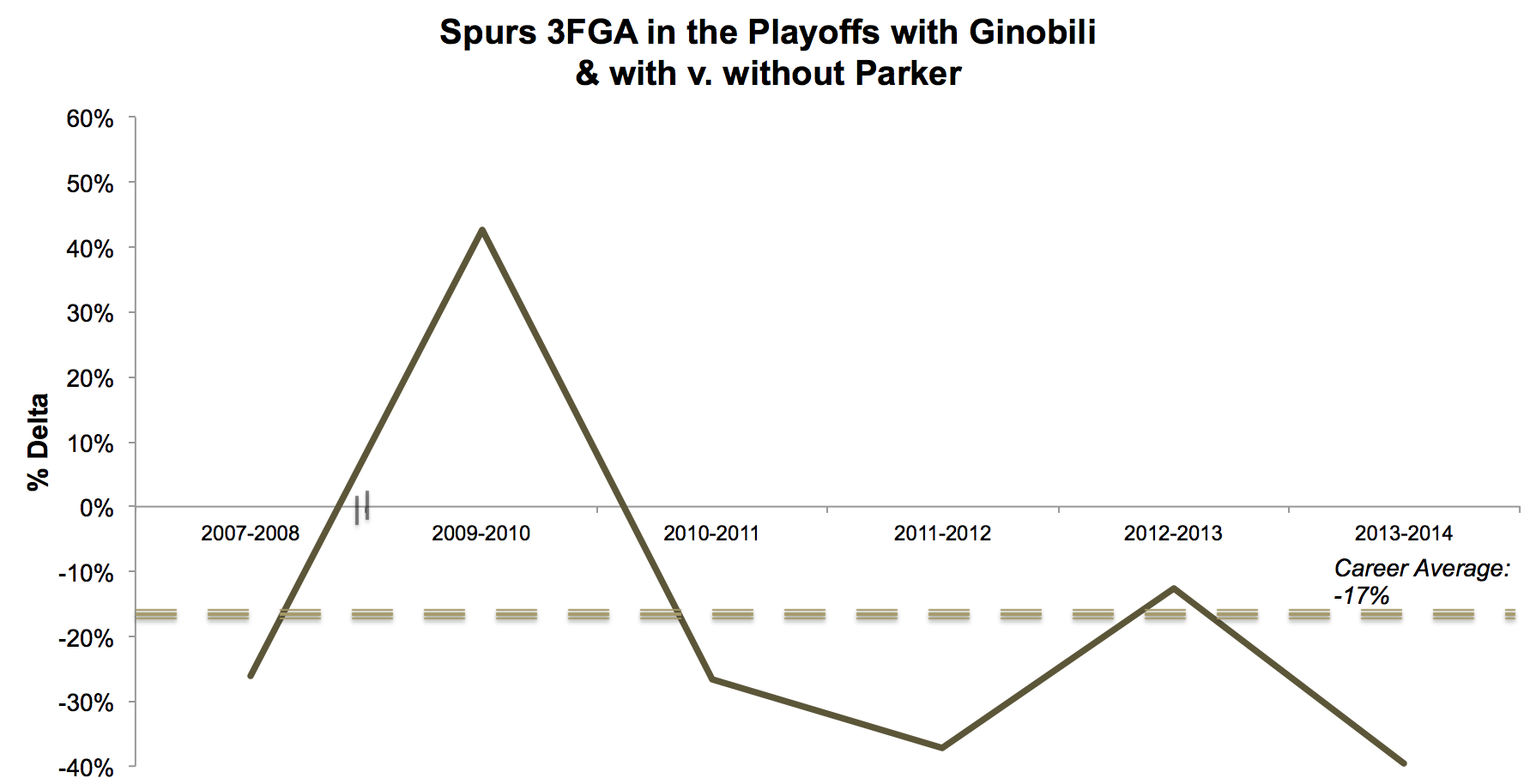 When Tony Parker is on the court, he is the primary playmaker. Meanwhile, for Manu Ginobili's less-experienced second unit, he is at the helm more often. Though, as we saw during Game 6 of the Western Conference Finals, Manu Ginobili can play point when the team needs him to, his natural position is shooting guard. For their postseason careers together since 2008, Tony's presence on the court has curbed the number of three pointers that the Spurs have taken by 17%. It has been even more pronounced this season, with a whopping -40% delta. In past seasons, many of the long range shots that a Parker-led team has avoided were ill-advised. In this year's playoffs, the crafty lineups that Pop has engineered have definitely played a role in the shot selection figures. This is especially true when Manu Ginobili finds himself on the court with Danny Green, Patty Mills, or Marco Belinelli. However, there is no doubt that Tony Parker is the commander on the court.

Through the years, we have all witnessed a young nineteen-year old boy from France withstand a trial by fire from Pop, years of silence from Duncan, and infamous off the court drama to blossom into arguably the best point guard in the league. Ever since the Spurs' last successful title run in 2007, this has been Tony's team. Based on the numbers and really just watching Spurs basketball, he does not take this responsibility lightly. Though the Spurs are ushering in a new era of talent in the hands (pun intended) of Kawhi Leonard, this is still Tony Parker's team. (And, by the transitive property, it is still Tim Duncan's team.) I know that the Spurs were able to close out the Thunder without Parker, but don't fool yourself into thinking that the best bench in the league can cover for him against the Heat. Get better soon, Tony! We are counting on you to be at full throttle.