Share All sharing options for: A portrait of Gregg Popovich 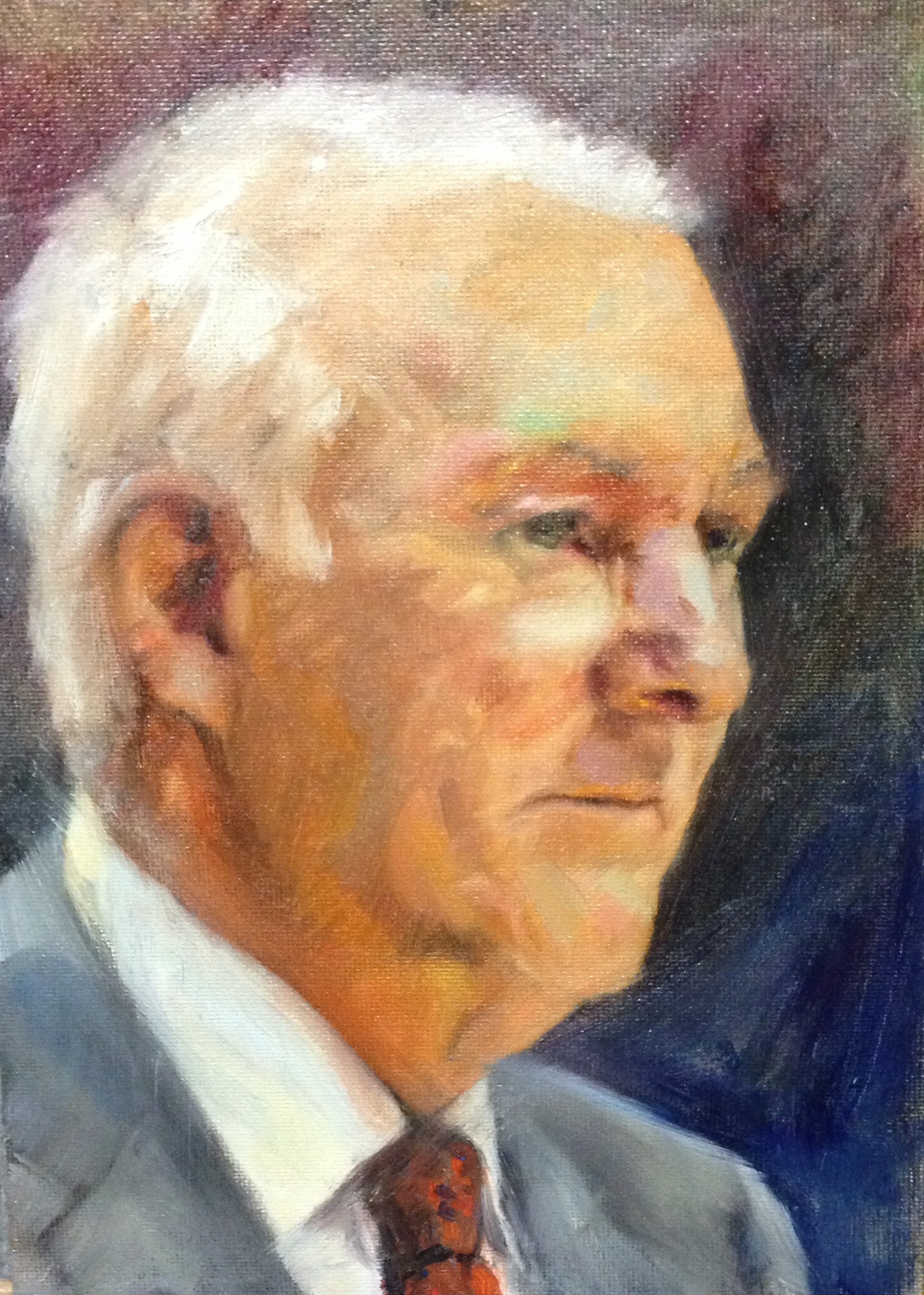 Coming off two straight blowout losses in the Western Conference Finals against an Oklahoma City Thunder squad that had regained its swagger with the return of shot-swatting sensation Serge Ibaka, the Spurs were faced with a moment of reckoning. Though they looked dominant in the first two games at home against the Thunder without the sidelined Ibaka, the momentum of the series had swung as sharply as one of the Congolese big-man's swooping-from-nowhere rejections. The pundits and critics made the easy connection to 2012 -- the Spurs were up 2-0 in the Western Finals then too, before losing four straight to the Thunder to get unceremoniously dumped out of the playoffs.

Well, maybe unceremonious is the wrong word. It felt like the crowning of a new era back then, with the defiant young Thunder set to dominate the West for the next decade. The Spurs had had their reign but it looked finished, the torch passed.

There was a brief respite in 2013, thanks to the surprise trade of James Harden and even more shocking knee injury to the seemingly indestructible Russell Westbrook, and the Spurs snuck through that open window for a quick bite of the apple. It appeared that Ibaka's calf injury would afford them a similar reprieve in 2014, but he returned much faster than anticipated and with him the Thunder once more looked unbeatable for the Spurs, an athletic mismatch they could not solve.

Spurs coach Gregg Popovich's adjustment to all this was to start Matt Bonner, the 11th man on the totem pole and one of the least athletic players in the league.

Though that move had little to do with it, the Spurs routed the Thunder at home, breaking the pattern of the 2012 series if nothing else. The tougher task of course would be to win at Oklahoma City to close the series out. No small feat to triumph in a building where they'd lost nine straight.

Again, Pop started Bonner. He started him in the second half too. And with Tony Parker severely limited by an ankle injury in the first half, Pop decided to shut him down and go with Cory Joseph, his 12th man, to start the third quarter.

Down seven points on the road in the third quarter of Game 6 of the Western Conference Finals, the Spurs had Matt Bonner and Cory Joseph on the floor. They both contributed to an early 14-5 run and San Antonio won the third quarter 37-20, getting eight points in the period from Boris Diaw, eight from Kawhi Leonard and six from Danny Green.

Their "big three" combined for seven points in the quarter.

In the fourth quarter, with the Thunder mounting a free throw-fueled rally, the lone Spurs bucket to briefly hold them at bay came via a three by Marco Belinelli, who had played 1:53 of the first 38 minutes in the game.

Belinelli would go on to do something similar in Game 3 of the NBA Finals at Miami, canning a three late in the third quarter after the Heat had cut a 25-point deficit to seven. It was his only bucket of the game but the key one in exorcising the demons of AmericanAirlines Arena, and the Spurs never looked back, blowing out the Heat three straight times to capture their fifth Larry O'Brien trophy.

But this title was different than the rest, and Pop, whom I had angrily and wrongly labeled a "stubborn old fool," had as much to do with it as anyone. Not only was he as driven and passionate as ever, motivated beyond measure to erase the "lugubriousness" of last season's Game 6, but more remarkably the Spurs won their fifth NBA Championship because he did something 65-year-old men are not supposed to be capable of doing.

The Spurs have played more of their deep reserves for longer minutes than just about every team in the league. Part of that has been a necessity, to rest their older stars through a marathon regular season, and part of it has been injuries. No question all the blowouts they rack up year after year plays into it as well. Still, once the playoffs started, Pop has always reverted to the traditions of the game and trimmed his rotation, especially as series stretched out, and the deeper his teams went into the postseason. By Games 6 and 7 of the Finals last year, he was playing only seven men, the same as Miami counterpart Erik Spoelstra.

But Pop saw something different about his bench this time around. Maybe it was the way that Diaw, Belinelli and Patty Mills carried the team in midseason when an injury epidemic sidelined half the squad. Maybe it was the way Joseph responded every time he was put in the starting lineup, an unusual tactic but one borne with the rationale that Mills works best as one of the "foreign legion" off the bench. Belinelli finished second to Tim Duncan in minutes played during the season and Mills led the Spurs in threes. When the dust settled, nine Spurs scored between 8.2 points per game, (Tiago Splitter) and 16.7 (Parker) and no one averaged even 30 minutes a night.

And the Spurs won 62 games and had the best record in the league.

The capital of trust that Pop nurtured with the reserves -- with all the players, really -- paid off in the glorious playoff run. Belinelli was trusted with fourth quarter minutes no different than Duncan. Green was trusted to drive into the teeth of the defense no different than Parker. The Spurs passed, screened, cut and shot as one single organism. Splitter and Leonard reached the ethereal level where they too could make the defense-breaking pass just as well as Ginobili or Diaw could. Less noticeably but no less importantly, the Spurs played with similar cohesion on the defensive end, switching, rotating, closing out on shooters and rebounding like madmen.

It culminated in a glorious crescendo in the Finals, with the Spurs absolutely throttling the Heat, setting Finals records for field goal percentage and margin of victory and making casual viewers almost feel sorry for LeBron James. The same analysts who were ready to bury the Spurs before Game 5 against the Thunder (and again after Game 2 of the Finals, when some wonky free throw shooting contributed to a two-point loss at home) were now declaring them to be one of the greatest teams of all time, certainly since the 2001 Lakers.

Popovich's five titles may pale in comparison to Phil Jackson's 11, but unlike the well-traveled "Zen-master," Pop has never left his post, never worked with the league's best talent, and never felt the need to cash in on his celebrity. Instead, he created a culture in San Antonio. There's a reason he often refers to it as a "program," as his imperious run is similar to the iconic college coaches in the game. Pop is the Spurs as much as "Coach K" is Duke and Geno Auriemma is UConn. His players play for him, play for each other, never complain about shots or minutes or roles and universally give the media nothing to use.

Pop didn't just win a championship. He defied every single bit of conventional wisdom the league has long held sacred. He won without stars, he showed his faith in every man on the roster, and he never, ever gave a moment's thought to the hype, the storylines or the brands -- whatever those are. He pulled off the impossible, the fantasy of every high school coach in America, a real life Norman Dale. Winning the NBA championship by playing team ball, and making it look as easy and cool. Social media has embraced Pop and his team and there are scores of YouTube clips lionizing the Spurs' hockey assists as though they were dunks and crossover dribbles.

Of course, he's blissfully ignorant of it all: this man who started Matt Bonner in Game 5 of the Western Conference Finals.