The hidden adjustment that helped the Spurs beat the Thunder

The media focused on the change in lineups in the later games of the Western Conference Finals, but a more subtle adjustment was more pivotal.

Share All sharing options for: The hidden adjustment that helped the Spurs beat the Thunder

The brilliant play of the Spurs in the Western Conference Finals was yet another example of the genius of Gregg Popovich. He made headlines in Game 5 when he placed Matt Bonner in the starting lineup to help space the floor and open up driving lanes, relegating Tiago Splitter to a backup role, coming off the bench for Tim Duncan. But that wasn't his most important rearrangement of the chess pieces on the NBA court, the pivotal move had to be using Kawhi Leonard to defend Russell Westbrook.

Kawhi is indubitably the Spurs’ best one-on-one defender. In the finals, he will be probably spend most of his time defending LeBron James, and in the first four games of the Western Conference Finals, he was on Kevin Durant. His unique combination of length (7'4" wingspan) and height (6'7"), to go along with his quickness, gives him the ability to disrupt every offensive move.

In the first half of game five, Kawhi's defense on Westbrook did not look good, Russ just seemed too quick off the dribble for Kawhi. 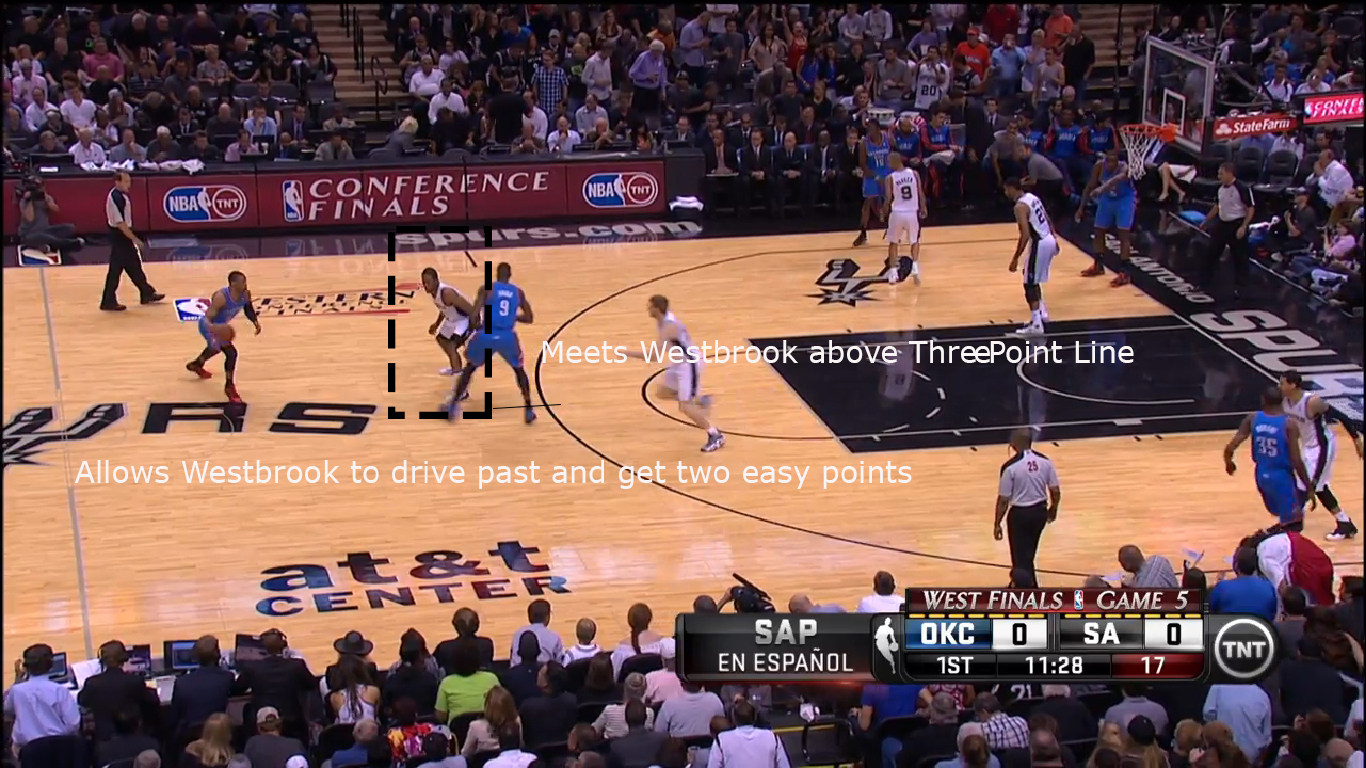 In the second half, Leonard made an adjustment that had Popovich written all over it. He backed off of Westbrook and gave him the deep, low percentage jumper if he wanted it. 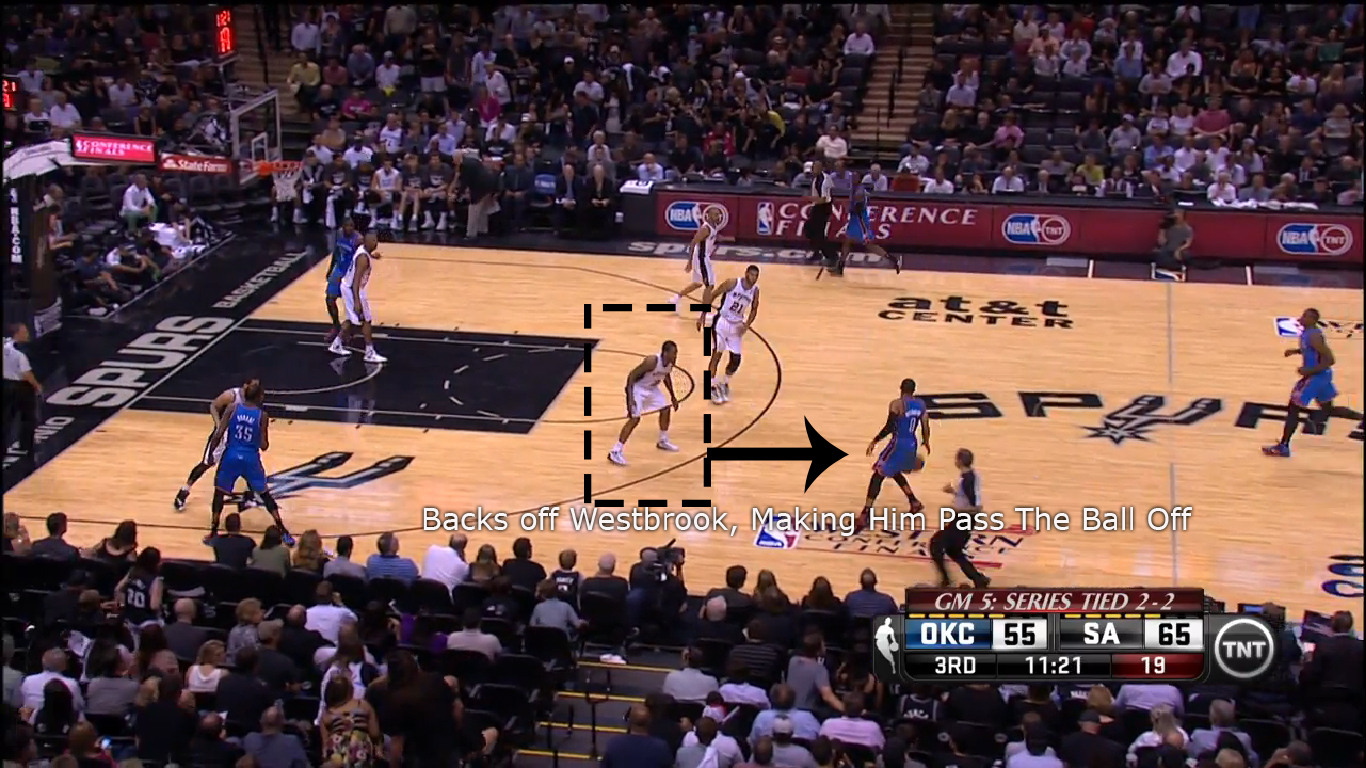 This proved extremely effective as Westbrook ended up going 5-of-9 from the field and 1-of-4 from the three point line in Game 5. In Game 6, Kawhi really settled in against Westbrook. Russell went 8-for-23 and only managed to make one three pointer. His 34 points were inefficient, and half of them came from the charity stripe, where he was 17-of-18.

The most impressive aspect of the matchup between Kawhi and Westbrook was the serious problems he caused for Westbrook trying to pass the ball to his teammates. Westbrook turned the ball over seven times in Game 6, after having just 15 in the previous 5 games.

The Spurs are back in the Finals after beating the Thunder in six games. Let's look at some of the plays that stood out in the Spurs' thrilling Game Six road win.

But perhaps even more important was the way Kawhi kept Westbrook off the offensive glass. After getting nine offensive rebounds through the first four games, Westbrook was shut out in games 5 and 6. That's a crucial adjustment in a series where the team who won the rebound battle won every game.

Putting Kawhi on Westbrook seemed like it might have created another big problem. It forced Danny Green and Manu Ginobili to guard Kevin Durant. This was another calculated move by Coach Pop, and it looks even better when you examine it under the coaching microscope.

The one weakness in Kevin Durant’s offensive game is posting up. He doesn’t have the bulk and hasn't developed the comfort in regularly backing opponents down to create easy baskets for himself. This was an aspect of LeBron James’ game that was added recently, and it established him as the best player on Earth. Popovich knew that he could afford putting a smaller player on Durant without risking being overpowered in the paint.

The instruction for whoever was guarding Durant was to give him no space to breathe. Whether it was Green or Ginobili, every time Durant caught the ball, he was encountered by a defender who suffocated him. 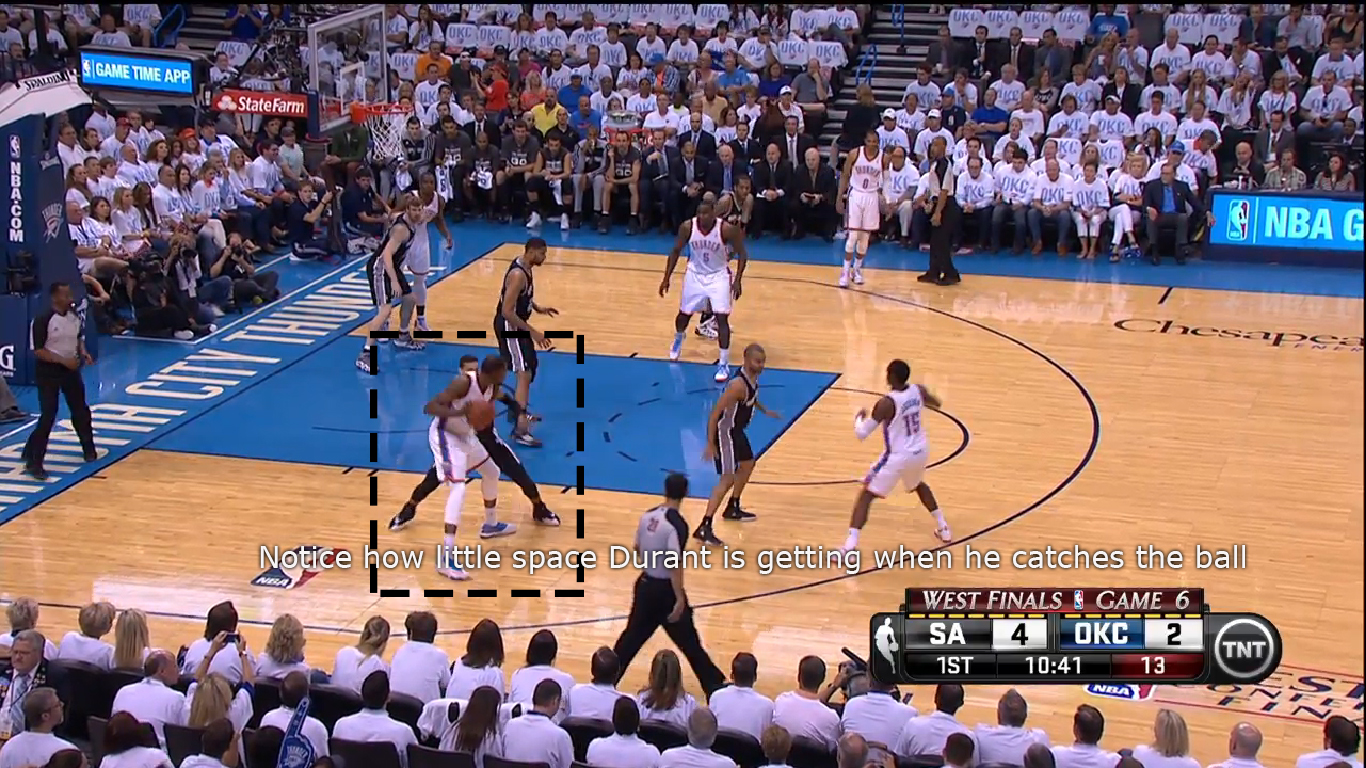 In that possession, Durant turns his back to the basket to protect the ball, and all of the sudden he is in awful position, at a 12-15 foot range with his back to the basket. With the Spur defense smothering him, Scott Brooks was forced to work KD off screens and rely on catch and shoot opportunities.

The Spurs played stifling defense on KD in Games 5 and 6. When one of  Manu, Kawhi, or Green was guarding Durant in game five, he shot just 5-for-13 from the floor. In Game 6, Durant hit just 2-8 on his three point attempts, and he scored 31 inefficient, hard earned points in over 50 minutes played.

The more I think about this adjustment, the more I admire Popovich’s move. While the media focused on changes in his starting line-up, what everyone should have looked at was the way we countered two of the most athletic and talented players on the planet.