Sure the Spurs won the Championship, but what else did they do?

The Spurs not only won the NBA Championship this year, they also set several records this past season and during the postseason.

Share All sharing options for: Sure the Spurs won the Championship, but what else did they do?

On Sunday, March 16, 2014 the San Antonio Spurs beat the Utah Jazz and extended their winning streak to 10 straight on their way to 19-in-a-row, which stands as the sixth-longest regular-season-only streak of all-time. The most noteworthy part of that victory was that the Spurs won their 50th game of the season that night. In doing so they extended their already-an-NBA-record of consecutive 50-win seasons to 15. Think about that. It's a truly remarkable feat. It's three seasons longer than the 1979-1991 Lakers posted, and if not for the 50-game 1999 season it would probably be 17 - or the entirety of Tim Duncan's legendary career. If you'd like to read more about this streak I'll point you to this article I wrote right after it happened. If you don't have time for that allow me to leave you with this nugget from the piece:

There were no major trades, the top players all bizarrely got compared to NBA disappointments, and the Spurs didn't take the guy I wanted. Otherwise, that was an awesome way to spend five hours. Won't you relive it with me?

JRW and Phil talk about Tim Duncan opting in

It's June o'clock and all's well. The season ended as well as it could have. The draft has come and gone (nice to meet you, Kyle Anderson) and Tim Duncan announced that he would be coming back to...

If 2014 is the final year of the Spurs' record, it will be 2028 before anyone can hope to break their record.

You read that right. Because of the 2012 lockout shortened season, when only the Spurs and Bulls won 50 games in the 66-game season, the only active streak that is more than two seasons long belongs to the Spurs. With the band at least mostly getting back together for 2015, it would be a huge surprise if the streak doesn't extend to at least 16. This seems like a record that will not be broken for a very long time. If ever.

That they accomplished that feat while not having a single player average 30 minutes a game is perhaps even more remarkable. The depth of the team and the minute-managing prowess that Gregg Popovich has developed over the years is quite an accomplishment. The Spurs became the first team since the ABA/NBA merger to not have a player average at least 30 minutes a game.

Duncan, the team's 17-year-veteran and franchise cornerstone, led the team in total minutes played, which is totally mind-boggling. His 2158 minutes played was 142 more than the second-place Marco Belinelli. Tim broke a couple records during the postseason, but a 37-year old leading a championship team in minutes played is just silly. I figured that would be a record as well, but Jason Kidd led the 2011 Mavericks in minutes played and he was a month older than Timmy when he did it. There's always next year though!

Once the playoffs started the Spurs began to break all kinds of records.

The trio of Duncan, Tony Parker, and Manu Ginobili notched their 112th win versus the Oklahoma City Thunder, and in doing so they passed Magic Johnson, Kareem Abdul-Jabbar, and Michael Cooper for the most playoff wins by a trio in NBA history. Regular season records are cool, but the playoffs are the only thing that really matters. Yeah, us Spurs fans are a spoiled bunch. So the fact that the Spurs' Big Three has racked up the most all-time wins in the postseason is pretty awesome.

While the playoffs were happening I was firmly with the idea that the record was great, but ultimately not that important if the trio couldn't up the number to 117, which is the number they reached when they won the Larry O'Brien. With the 'chip in hand, it's much easier to appreciate the number as well as the loyalty, longevity, and greatness that it represents.

If you did any reading after the championship it's almost certain that you read that the Spurs' total margin of victory in the NBA Finals was the greatest ever. San Antonio beat the Miami Heat by 70 points over the Finals' five games. Seventy points, including an embarrassing combined margin 57 over the last three games! The Spurs put everything together at the right time and this number is a great indicator of just how thoroughly the Spurs beat Miami on their way to the franchise's fifth title.

You know the saying, "revenge is best served cold"? Well, if we are calling the Spurs beating Miami revenge, it was just about the warmest it could have been. I guess the Spurs could have swept the Heat, but either way, this was no cold revenge. I, and others, called it the revenge tour, but now that it's over it seems like less of a revenge tour and more like a redemption season - a season that made the last six seasons that ended without a title worth the pain of losing year after year. The last season was about much more than just revenge for a couple of playoff exits; it was justification for the team ignoring the talking heads and just doing their thing year after year.

Not only did the Spurs break the record for largest margin of victory in the Finals, they also broke the record for best shooting percentage during the Finals. The good guys shot 52.8% from the floor for the entire Finals, and in doing so they broke the 1991 Chicago Bulls' previous record of 52.7%. This stat is a testament to the Spurs' philosophy of good to great, meaning if you have a good shot but someone has a better one you better pass the dang ball. The Spurs put on a historic offensive performance over their last five games, and their defense wasn't too shabby either.

Tim Duncan also broke several individual records this postseason. He broke Kareem's record of most minutes played in the playoffs all-time. Tim's 8,902 minutes played is 51 more than Kareem played. That's the equivalent of 185 full games, or 2 1/4 full seasons. For those of us that have been watching Big Fun play since he came into the league, that's a whole lot of Tim, and certainly even more than the most optimistic of fans could have hoped for in 1997 or even 2007. We're more than lucky to be able to marvel at Timmy's longevity.

That's a heck of a record, but Tim also passed Magic Johnson during Game Four of The Finals for the most double-doubles in the playoffs of all-time on the same night, June 12th, that he passed Kareem for most minutes. He tallied his 158th postseason double-double and broke the tie with Magic. This of course speaks to the remarkable consistency that The Ageless One has been able to sustain over his incredible career.

Of course Tim isn't done yet, and he should be able to add to both of those records in the spring of 2015, thus widening the gap he has over active players in each category. Kobe Bryant is next up on the active list, but we'll see what the Lakers do with Bryant's $23.5 million 2014-2015 contract as well as Steve Nash's $9.7M. Besides those two, the Lakers only have Robert Sacre ($915,243) on their roster for 2015. They'll need to sign 10 players to fill out their roster to the minimum 13 players required. There's more than a good chance that the Lakers miss the playoffs next season. Next up on the active playoff minutes played list is Tony Parker. This is one impressive list, and it's not unreasonable to think that Tony could end up in the top five by the time he calls it quits. 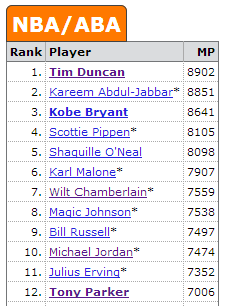 Here's a record you probably didn't hear about. I can't guarantee this one, but I looked at Michael Jordan, Kareem, Bill Russell, and Kobe. Tim Duncan has shared a championship roster with 51 different players. Jordan and Kobe played with 36 different guys when they got their rings, Kareem played with 42, and Bill Russell played with 45 over his 11 championships.

Since Timmy has five rings this means that on each championship team he led there were about 10 first-time champions on each one that were fortunate enough to team up with the legend and pick up a ring. Let that soak in. It's absolutely absurd. Sure Tim played with at least three Hall of Famers along the way, but he also played with Jackie Butler, James White, Mengke Bateer and Gerard King. It's one of the most accurate things that Bill Simmons has written, but he certainly had a moment of clarity when he wrote in his book that "you would have wanted to play with [Tim]."

A look at where this still-going run has placed our Big Three among the all-time greats:

Here's the all-time rebound leaders, obviously Timmy won't be able to move up, but in the modern era he stands alone. 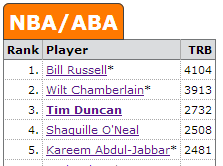 This isn't a new record, but Tim Duncan added to it and he is far and away the all-time leader in playoff blocks. If you'll notice, there isn't a single active player that has even half of the blocks that Duncan has. This one seems like it will hold up over time as well. At the least it will be a very long time before a player passes the great Duncan. 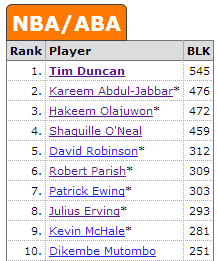 There you have it, Pounders. Your Spurs not only won the whole thing this year, but they set some records along the way. On top of that, they're still not done.