Checking in on one of the Spurs' most exciting draft-and-stash prospects: the sweet-shooting Davis Bertans.

With the draft one day away and the Spurs likely preparing to stash someone else overseas, it's the perfect time to check in on an international player they already have the rights to and who seems to be progressing quite well: Latvian forward Davis Bertans.

Who is Davis Bertans again?

In the George Hill trade, the Spurs received the rights to the 15th overall pick of the 2011 draft (Kawhi Leonard), the rights to Erazem Lorbek and the Pacers' second round pick (42nd overall). With that pick they selected Davis Bertans, a 6'10'" forward out of Latvia. There was a rumor that the Spurs had guaranteed Bertans he would be selected with their late first rounder, the one they used to select Cory Joseph. But since the plan all along was to stash Bertans in Europe, the spot in which he was selected didn't matter.

Bertans was playing for Union Olimpija of Slovenia at the time of the draft, an institution with a tradition for developing young players. He stayed with Olimpija for half the season before making the transition to the more stable Partizan Belgrade of Serbia after Olimpija's financial problems prevented them from being able to pay their players salaries. Partizan is a powerhouse in the Adriatic league but they have not had significant success at the European level.

The change of scenery did Bertans some good as he regained the shooting touch that had abandoned him in Slovenia. Unfortunately he still struggled to stay on the floor in that half of a season, only averaging around 11 minutes a game despite stellar shooting percentages. In his his first full season in Serbia, however, Bertans came into his own as an important player for his squad, averaging 44.6% on threes while playing over 20 minutes and appearing in all of his team's games. He helped Partizan win their sixth Adriatic league championship against rivals Red Star Belgrade.

Unfortunately, Bertans suffered a torn ACL during the finals and was out for most of the 2013/14 season before returning to action this past March.

How is he doing now?

Bertans has only played four Euroleague games this season, and he's averaged a solid 12.5 points, 3.8 rebounds and 1.8 assists on 43.5% three point shooting. He only played three games in the Adriatic league and his numbers were actually worse than his Euroleague figures. The biggest sample size came from the less competitive Serbian League, in which he played 17 games and averaged 13.4 points, 2.4 rebounds and 1.2 assists in 23.1 minutes per game. The numbers show that, at least at this point, Bertans' value comes as a scorer.

Partizan doesn't have a huge budget so they depend on finding and developing good young prospects, which means most of Bertans' teammates are rather young. But that doesn't mean they are not quality players. Shooting guard Bogdan Bogdanovic is projected to be drafted on Thursday and big men Nikola Milutinov and Dejan Musli were highly regarded youth players. The team's sole veteran is Sasha Pavlovic, who started for the Cavaliers in the 2007 NBA Finals against the Spurs.

Bertans is in a perfect situation for his development, on a team that relies on his performance without putting too much pressure on him.

How good could he be?

I've only watched four Euroleague games from this season but Bertans thoroughly impressed me. He is already a deadly shooter. His release is quick and he can score spotting up, coming off screens or using a ball screen to create separation. When the defense closes out too aggressively he is not afraid to put the ball on the floor and attack the rim, showing solid if somewhat awkward ball-handling. He can get a little out of control on drives and sometimes seems to have made up his mind about shooting before even catching the ball, resulting in some bad shots. But even with those weaknesses, he is the kind of player that could affect an offense in a positive way at any level, including the NBA, because the defense could never play off of him.

The problem, like with a lot of European prospects, is determining what position his is better equipped for defensively in the NBA. Bertans is 6'10" but doesn't possess a long wingspan and he only has average lateral quickness. Compounding problems, he is very skinny, which means he really doesn't seem to have the tools to guard smaller or bigger wings. Normally, a guy his size would be encouraged to bulk up significantly and shift to the role of stretch four, but Bertans has the game of a small forward. He has no post moves, and even though he displays effort to deny entry passes, he can be taken advantage by bigger players on the other end.

Partizan also plays a ton of zone defense, which makes judging his defensive potential even harder. He usually stands under the rim on their pet 1-3-1 zone, where his ability to close out to the corners and his height are put to great use. 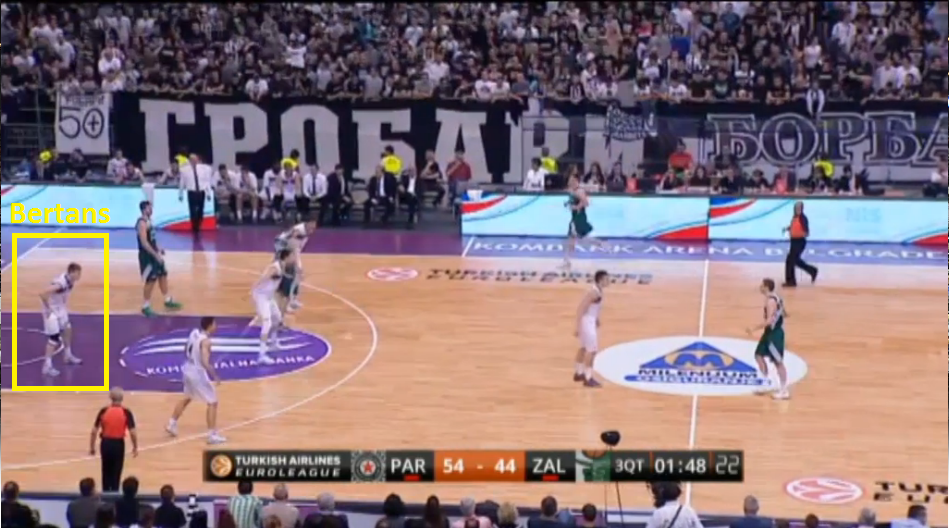 He shows good awareness and toughness but when I've seen him guard a smaller, quicker player the results have been mixed. Sometimes he gets in a good stance and slides his feet, but other times he stands too upright and defends with his hands, leading to fouls. The same applies to his over-eagerness to block shots, which often costs him rebounding position. Consistency and focus would go a long way toward improving both his individual and team defense.

That being said, his steal and block numbers from last season were really impressive, so his defensive potential could be higher than what I've seen from him this season after the injury. And he might be exposed for playing on a mediocre to bad defensive team that plays an uncommon type of zone that leaves the corners wide open and struggles on the pick-and-roll in man-to-man coverage because of their youth and the lack of mobility of its bigs.

Those concerns are real but Bertans is such a fantastic shooter already that he could still be a special player simply on the strength of his beautiful jumper.

Will he make the leap soon?

He still has two more years under contract with Partizan but his buyout shouldn't be a problem. Considering he is only 21-years-old and he might not be physically ready for the NBA, letting him continue to develop for at least one more year in Serbia is probably the way to go.

Bertans has a ridiculously quick release and because he is so tall, he has no problem shooting over defenders.

When they execute, Partizan runs a pretty offense with tons of motion. And they use a play in which Bertans starts in one block, uses two screens and receives the ball on the opposite wing to free him up. From there he can shoot...

...or attack the closeout.

He also shows good passing skills in transition, especially for a player his size.

And he doesn't just stand in the perimeter. He knows when to cut.

Updates on the other stashed players

Only Adam Hanga has a guaranteed spot in a European competition next season, as Laboral Kutxa will play in the Euroleague. Livio Jean-Charles' ASVEL might qualify to the Eurocup, the second league in importance. Participating in two tournaments could afford the French forward and opportunity to make up for lost time after missing a year with injury.

Ryan Richards and DeShaun Thomas, if they stay with their current teams, will only play the Greek and French league for Ikaros and Nanterre, respectively, which might allow them to play Summer League with the Spurs. Bertans will play the Serbian and Adriatic leagues for Partizan.

And here is a basic stats breakdown, courtesy of Mark Olsen: