The younger, more athletic Spurs will beat the Heat in 5

In the days leading up to tip-off of the 2014 NBA Finals, you likely won't see this angle anywhere else. It's a disservice to the Spurs but an outright injustice for the Heat. Because for all their past success, Miami enters this series severely over-matched.

Share All sharing options for: The younger, more athletic Spurs will beat the Heat in 5

As the NBA Finals approach, all eyes in the basketball world will watch with preconceived notions and biases that sway their thinking. In many ways it's not fair to either team because the endless postmortems written about these Finals will marvel at the ageless wonder of the Spurs and lament the missed opportunity by the supposedly youthful and more dynamic Heat.

The keys to a title are in Craig Sager Jr.'s car

It's simple really. All we need to do to ensure the Spurs win their 5th NBA title is raise enough money to buy Craig Sager Jr a car so he can wreck it.

J.R. Wilco shares his thoughts about Game 6 and who the MVP of the series was and much more Spurs talk.

The keys to a title are in Craig Sager Jr.'s car JRW talks Game 6 with Phil Naessens

But the simple truth is that the Spurs are younger, more athletic and play a much more exciting brand of basketball. That obvious-yet-overlooked fact coupled with San Antonio's no mercy style of play at home and their recent realization that they can still win on the road is a recipe for a short, lopsided series.

LeBron James will unfairly shoulder much of the blame. He is the best basketball player on the planet, but he's surrounded by a team that isn't very good anymore. Despite his relative success so far in the playoffs, Dwyane Wade is not the player he once was. Chris Bosh ... I'll take him in a 3 point contest, maybe. Erik Spoelstra has proven to be a very good NBA coach, but he's probably not in the same class with Rick Carlisle, much less Gregg Popovich.

Yes, James has another gear in the playoffs, and he will likely have a tremendous series. But like his effort against the Spurs in the 2007 Finals, it won't be enough. The Heat can't keep up with the depth and speed of the Spurs. 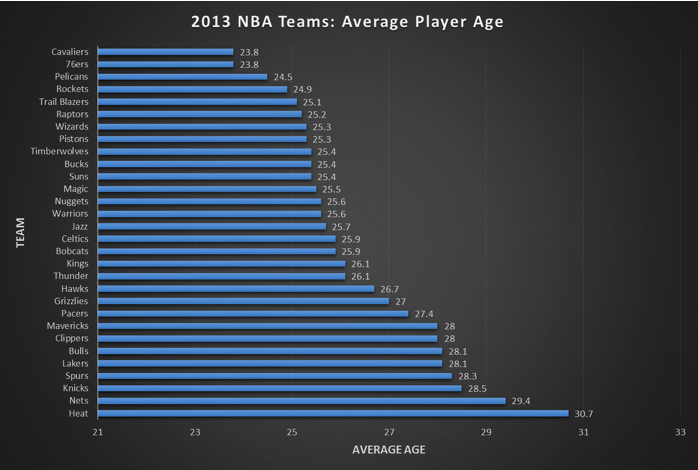 The Miami Heat are almost 3 years older than the Spurs in average age. Yes Tim Duncan is 38 and Manu Ginobili is 36, but who else on the team is actually old? 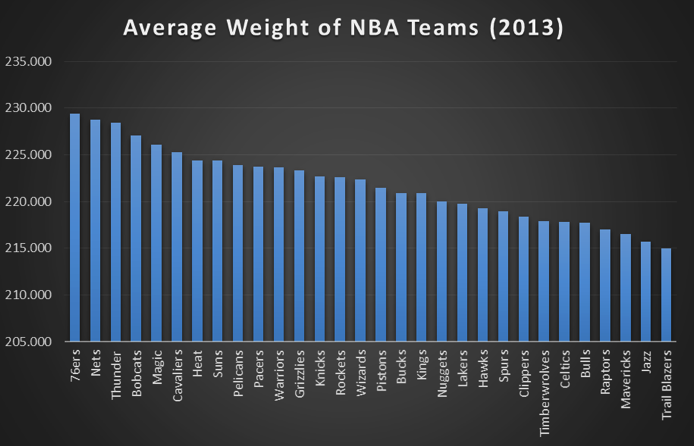 At first blush this statistic might appear to be frivolous, until you consider the teams ahead of Miami in weight. Among teams that had a successful season, only the Thunder and Nets are heavier than Miami. This is by no means the most important statistic, but when considered alongside the average age of the Heat, it makes sense to consider.

It is also worth noting that if nothing else, the chart shows that the Spurs are indeed the smaller team. Bigger bodies coupled with aging legs help to account for their slower average speed during the playoffs and the large gap between the two teams in distance traveled per 48 minutes.

The Spurs average almost a half a mile per hour faster and cover 1.7 miles per game more than the Heat. They are the faster, smaller, more athletic squad.

Through the playoffs, the Spurs are averaging almost 30 more passes per game, and a full 2 assists more per game than the Heat. While Miami lets LeBron isolate and Chris Bosh watches from beyond the 3 point line, the Spurs are most successful when they furiously whip the ball around the perimeter, desperately looking for a better shot.

Jim Collins coined the term "good to great" which has been part of the corporate vernacular for years, the phrase tossed around board rooms as CEO's strive to make their company better. So it makes perfect sense that Gregg Popovich adopted it to describe his offensive philosophy. That style, that approach from the Spurs is much more exciting to watch than what the Heat offer, and it's more effective too.

Dan McCarney of the San Antonio Express News had a terrific breakdown of how that philosophy works in a post titled Gone in 3 seconds: How to dissect a defense

"Good to great" is how the Spurs term their offensive philosophy, using ball movement, player positioning and unselfishness to work for the best shot possible.

At its best, their teamwork is almost akin to art, which Washington center Marcin Gortat alluded to when he likened watching the Spurs to savoring the works of Mozart earlier this season.

The Spurs were at their symphonic best on one possession late in the third quarter of Game 6 of the Western Conference Finals, with four players involved in a three-pass sequence spanning just three seconds to produce a wide-open corner 3-pointer for Boris Diaw.

This is where it gets interesting. While the Spurs are averaging more points per game, the Heat are actually outperforming the Spurs in a number of shooting categories. This is where the series will hinge. If the Heat can shoot lights-out from the outside (as James did in Game 7 last year) they will have a fighting chance. But if they simply trade baskets with the Spurs, the youth and athleticism in San Antonio will wear down the aging Heat.

What a delicious, ironic twist. 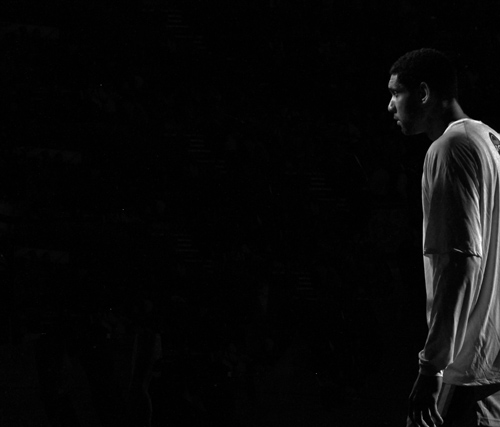 Sure, call me a homer. Or call me a dreamer. Call me out for being too boastful or arrogant. Feel free to bookmark this article in hopes that you can throw it back in my face for the duration of the summer. But know my confidence hasn't always been what it is now. Last Wednesday morning I was beginning to formulate postmortems of my own in case the Spurs weren't able to escape the Western Conference Finals, but the Spurs survived against the much younger and more athletic Thunder.

Now for the first time in the playoffs, the roles are reversed. It's the Spurs with the upper hand in virtually every tale of the tape category. It's the Spurs that have the younger legs and ability to frustrate their opponent with their athleticism.

This is not an all encompassing statistical analysis, and was never intended to be. I merely pointed out the tip of the iceberg on a subset of stats that can paralyze us if we let them. But, if nothing else, we should all be able to agree that the Spurs are the younger, smaller and quicker team. The Spurs move the ball better, resulting in an almost 10 point scoring advantage per game.

There are thousands of other metrics to analyze, but those are the obvious facts that caught my attention. Those are the admittedly simplified stats that I pointed out in this story that give me confidence. I only focused on the big numbers, on the vibrant colors and not the pastels.

And then Tim Duncan gave us all permission to dream with his comments after the Spurs dispatched the Thunder on Saturday night.

Some say it was Duncan calling his shot. Some say it was his Joe Namath moment. Either way it was out of character for the man that always chooses his words carefully. But that's exactly why his words were so powerful. Hyperbole stripped away, Duncan was simply speaking with the quiet confidence of a man that knows his is the better team. And just like in the picture above, he can see what the rest of us can't just yet.