The Spurs' Big Three by the Numbers: Part 1 - Manu Ginobili

Manu Ginobili changed the Spurs when he joined them with his creative and sometimes wild style of play, but even now, as his career winds down, he remains a vital contributor for the Spurs quest to win a championship in 2014.

Share All sharing options for: The Spurs' Big Three by the Numbers: Part 1 - Manu Ginobili

Manu Ginobili has been the most frustrating and mercurial Spurs player to watch since he joined the team in 2002, when he brought his wild and sometimes inconsistent style of play to the NBA. Though his long and wild Nash-ty hair is long gone, and  in its place there is a bald spot that reflects the bright lights of the arena, the fire in his eyes and his passion for the game still burn as brightly as ever. You would be hard pressed to find a more fierce and indomitable competitor in any professional sport. I am also pretty sure that no other professional athlete has swatted a bat out of mid-air in the middle of a live sporting event.

We have seen glimpses of vintage Manu this year, particularly in the Spurs closeout game over the Thunder on Saturday. Coming off of a relatively lackluster postseason last year, the numbers seem to indicate that Ginobili may have found the fountain of youth.

Here is a snapshot of Manu Ginobili's scoring in the playoffs throughout his career.The points with stars represent championship years for the Spurs. This season, he is averaging 21.0 points per 36 minutes; that is 35% more than the 2012-2013 season. 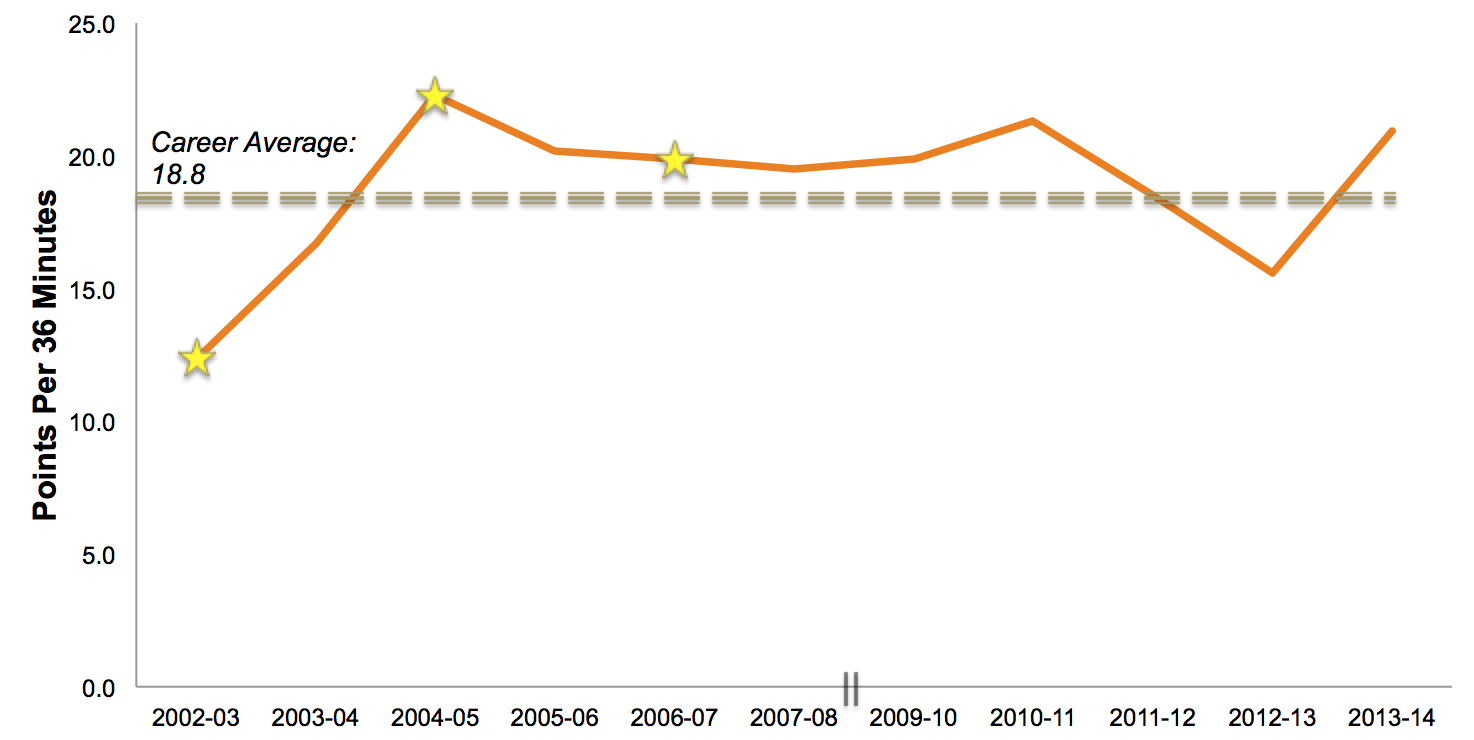 This offensive production has been spurred (pun intended) by Manu's efficiency from beyond the arc as well as his ability to get to the line. See for yourself:

Perhaps this is a harbinger of good things to come. The only season in which Ginobili shot above his career average (dotted line) from the beyond the arc and the Spurs did not win the championship was the 2007-2008 season. But let's not talk about that season, especially in a "Ginobili tribute" post. In addition to shooting well from long range, Ginobili has also been attempting many more three pointers this season (15.4 per 36 minutes) than previous seasons. Sounds reasonable, right? What may surprise you is that this is a playoffs career high for him!

Manu has also been much more aggressive, which results in free throws, during the Spurs current playoff run than he has been in the past few seasons. He is currently at his career average for free throw attempts this postseason:

The 2014 version of Ginobili can also play point when required. I was shocked by how effective he was in Game 6 of the Thunder-Spurs series after Tony Parker sat out with an ankle injury. However, like a fine wine, his passing and playmaking abilities have actually gotten better with age. Though he is seeing a dip in stats since last year's heartbreaking playoff run, his assists this season are significantly higher than his career numbers. 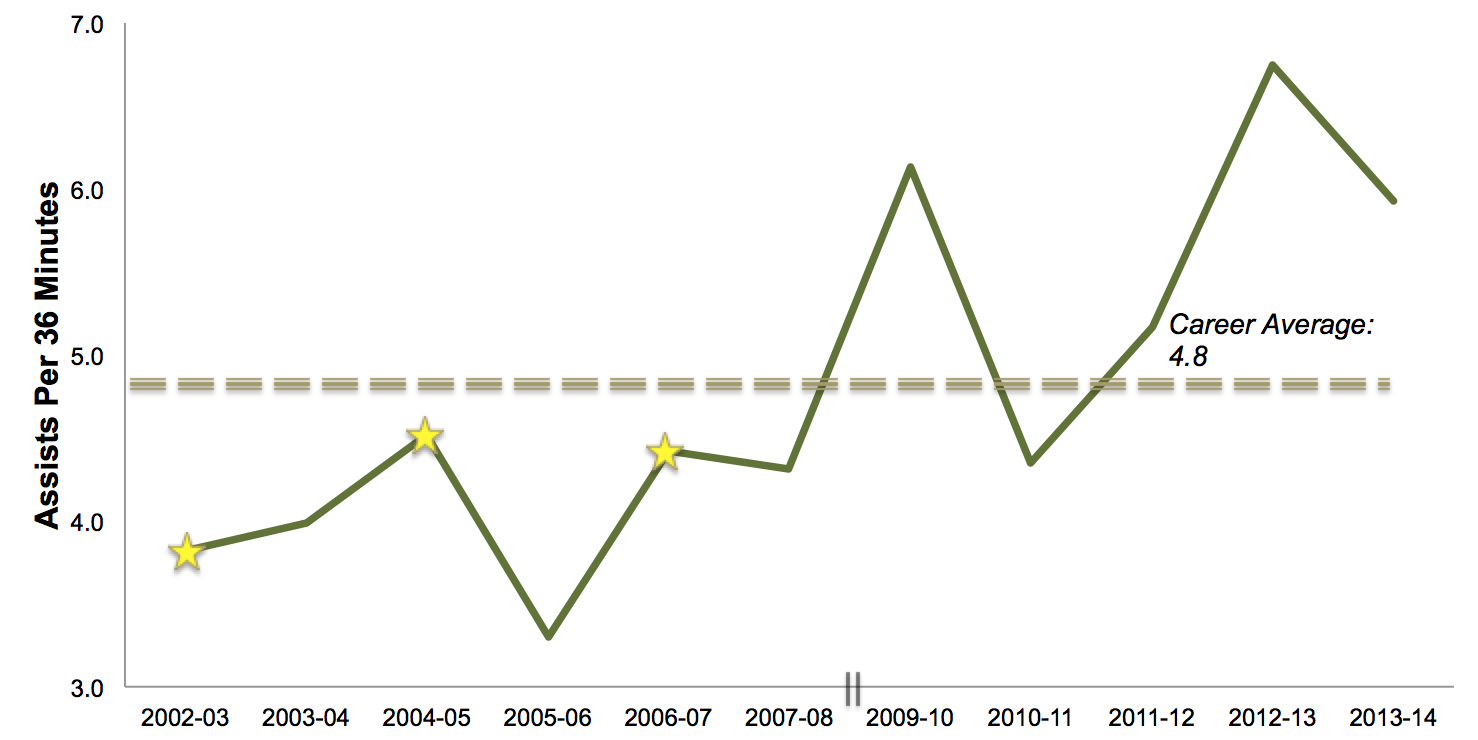 Though the numbers are impressive, I won't pretend that Manu Ginobili's athletic gifts haven't diminished over the years. The bald spot does not lie. However, it's clear that Manu has found a way to stay relevant despite Pop's lofty expectations and a changing supporting cast.

During last year's playoffs, Gregg Popovich summarized the quandary that is Manu Ginobili in a few sentences: "I went from wanting to trade him on the spot to wanting to cook breakfast for him tomorrow morning. That's the truth. When I talk to him and say, `Manu,' he goes, `This is what I do.' That's what he's going to tell me. I stopped coaching him a long time ago."

Even though we can't know how many more seasons that Manu will continue to play at his current level, I can't imagine watching the San Antonio Spurs without Manu.