Are the Spurs a dynasty?

Categorizing the accomplishments of the Spurs over the past sixteen seasons is difficult to do. Should winning five championships over such a long period of time be considered a dynasty?

Share All sharing options for: Are the Spurs a dynasty?

The Spurs won their 5th NBA Title by religiously adhering to a system honed and perfected over the years by Gregg Popovich. And though their style of play has evolved, their success on the court has been incredibly consistent.

While the vast majority of teams in the NBA cycle through ups and downs, coaching changes and rebuilding years, the Spurs have won at least 50 regular season games for 15 consecutive seasons and now have five Larry O'Brien trophies, perfectly sized to serve as a useful objects for Popovich to hang his laundry.

These accomplishments have led many to question whether what the Spurs have built is indeed a dynasty. It's a difficult concept to wrap your head around, because like so many things the Spurs do, their place in the conversation is outside of universally accepted norms.

Dynasties in their socially acceptable form are usually supernovas that burn brightly for a short period before flaming out in similarly dramatic fashion. They often conveniently fit neatly inside a calendar's decade and are used as arguments against one another in bars and by broadcasters ad infinitum. The 70's Steelers, 80's Niners and 90's Cowboys are all considered dynasties based on that criteria.  And many beers have been consumed while discussing whether or not the Bulls of the 90's could beat Magic's Lakers from the 80's.

That's what makes the accomplishments of the Spurs over the last 15 years (and 16 seasons) so unique. And what the Spurs have done has the potential to forever change the standard a team must meet in order to be thrust into the timeless argument over which hypothetical team for the ages could stomp a mud hole in the other.

If not for the Lakers' impressive run from 2000-2010, the Spurs could have easily claimed the mantle of "team of the aughts" and had their three championships bandied about the airwaves as the team that provides an intriguing match-up with the Celtics of the 60's. But the Lakers rightfully claim that decade as their own.

But now that the Spurs have added a fifth championship seven years after their last, and 15 years after Tim Duncan's first, how should this run be classified?

It's interesting to note that over this 16 season run by the Spurs, only six teams have won an NBA title. The Spurs have five, the Lakers five, the Heat have won three, and the Pistons, Celtics and Mavericks have each won once.

Even more interesting is that only eight teams have won the NBA championship in the last 30 years. The aforementioned Bulls of the 90's and the Houston Rockets--who took full advantage of Michael Jordan's quest to learn to hit a curve ball--are the only other teams to stand on the podium grooving to "We are the Champions" after the final game of the NBA season.

For comparison purposes, I created the chart below that shows the records and championships of the three teams that have earned the most hardware since 1999--the Lakers, Spurs and Heat. And even though each team had a dominant run, the Spurs far and away have been the most consistent.

It's not breaking news, but the chart does serve as an adequate visual to complement the thousands of words written to describe the Spurs sustained excellence and consistency. 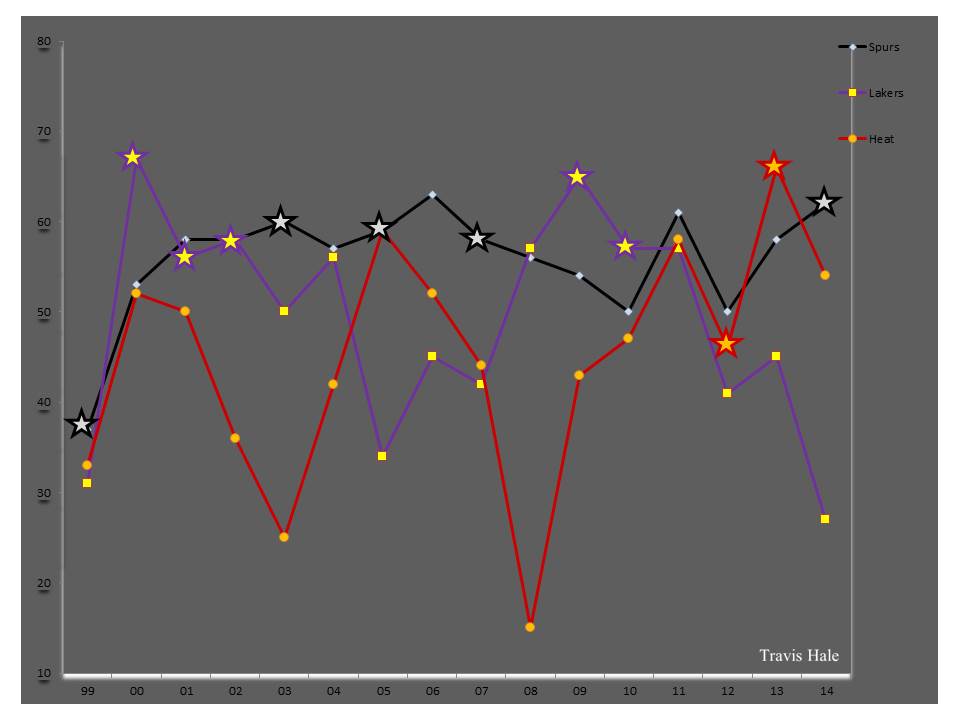 Note: '99 and '12 were strike-shortened seasons

When discussing NBA dynasties the gold standard is of course the Boston Celtics. Their entire body of work, but particularly their dominance in the 1960's, set the bar for all others to attempt to clear. But did you know they set that bar in a league made up of only eight teams?

Now this is in no way an attempt to discredit what Bill Russell and the Celtics accomplished, but it's worth consideration. Especially when a team just scratched and clawed their way to a fifth ring in a league with almost four times as many teams to fight through.

And while each season hasn't ended with an NBA title, I would surmise that there aren't many teams in the NBA that wouldn't trade places with the Spurs and their mind boggling success since 1999. For proof, just take a look. 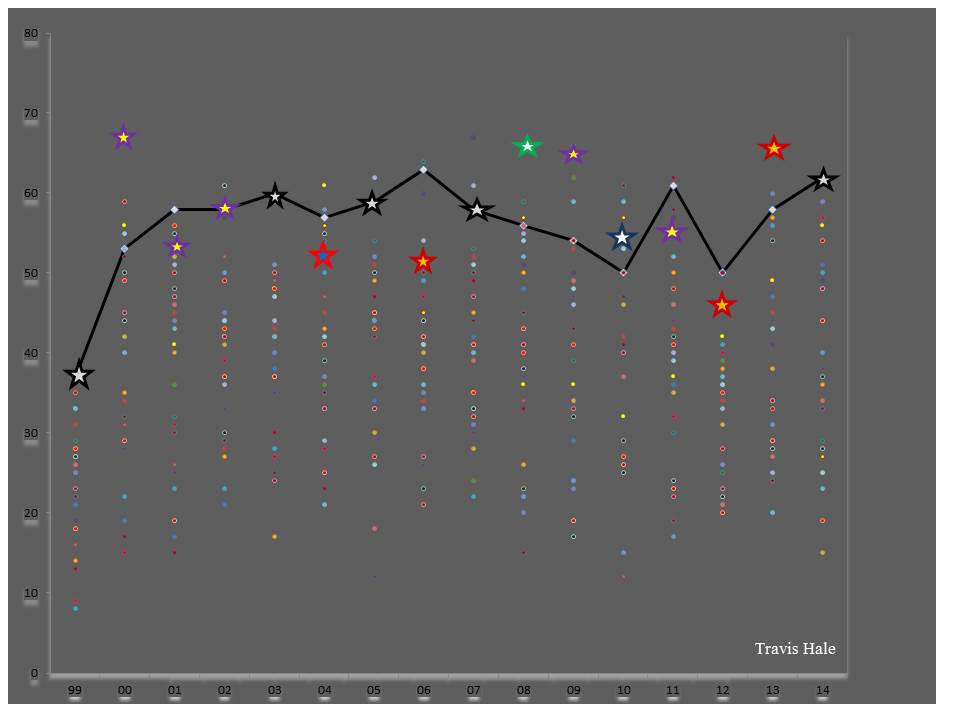 It's one of those graphics that takes your mind a few seconds to process. It's a chart of every NBA team's regular season win total since 1999 and that year's champion highlighted with a star. It's a shocking visual that highlights what's been happening in San Antonio for so long, and that so often goes unnoticed. And it's spectacular.

So I'm content to let others argue whether what the Spurs have done since 1999 is worthy of entrance into the exclusive sports dynasty club. Because all I can ever really believe is what I see with my own eyes.

And what I've seen is really something.