Here are the details for the River Parade and the Alamodome Celebration. Go out and celebrate what this amazing Spurs team accomplished this season. The city is going to party again, and maybe we'll even get to see Gregg Popovich dance a little.

The official release from the team: 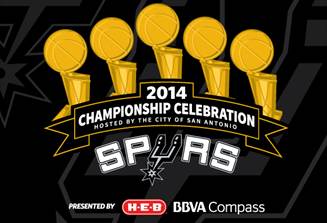 A river parade community celebration begins at 6 p.m. on the River Walk.  Following the river parade, the celebration will move to the Alamodome for a special ceremony beginning at 9 p.m.

"The City is proud of our Spurs," said Mayor Julián Castro.  "This fifth championship cements the Spurs' legacy as one of the greatest sports franchises in history."

Both events are part of the 2014 Spurs Championship Celebration, presented by H-E-B and BBVA Compass. The City of San Antonio is hosting the celebration for the Spurs and the entire community.  Rio San Antonio Cruises and the Paseo del Rio Association are also providing support for the event.

The river parade will begin at 6 p.m. at the Arneson River Theater, travel through the River Center extension past the Convention Center and Rivercenter Mall and end at the Navarro Street Bridge.  Barges will carry Spurs players and coaches, Spurs officials, former Spurs players, City and Bexar County officials, live musical entertainers and others down the San Antonio River.

Spurs players, coaches and local officials will address fans at the Alamodome and show off the latest championship trophy.

The doors for the Alamodome celebration will open at 4:30 p.m.  No tickets will be needed to enter the Alamodome.  Fans that arrive early at the Alamodome will be able to watch the victory parade broadcast live on an LED video wall as well as highlights of the Spurs 2014 NBA championship run.

Fans are encouraged to utilize the VIA Park & Ride available from the AT&T Center.  The VIA Park & Ride will be available in parking lots 6 and 7, accessible via Gate F off of AT&T Center Parkway.  Shuttles will begin at 3:30 p.m. and will drop off fans at Alamo and Market Street for the 6 p.m. river parade or at the Alamodome for the 9 p.m. ceremony.  VIA Park & Ride return service will be provided from the river parade at Alamo and Market Street to the AT&T Center location until 8 p.m., and return service will be provided from the Alamodome until one hour after the conclusion of the ceremony.

VIA charges $5 for each round trip passenger. A discount fare of $2.50 is available for children ages 5-11 years old, senior citizens 62 years or older with a photo ID, Medicare recipients, persons with disabilities, and students with a valid VIA ID.  VIATrans patrons and Personal Care Attendants (PCAs) are free.  Payment for fares will be accepted in cash only, so passengers are reminded to have exact change.

The City's downtown parking garages, surface lots or parking meters are also available.  More than 4,000 parking spaces are available near the River Walk and the Alamodome.  Parking fees range from $5 to $10 depending on location.