The Spurs' Big Three by the Numbers: Part 3 - Tim Duncan

Tim Duncan isn't known for his scintillating statistics, but we take a closer look at the numbers and see how his presence and style of play affects his teammates and has been a key factor in the excellence of the Spurs throughout his 17 year career.

Share All sharing options for: The Spurs' Big Three by the Numbers: Part 3 - Tim Duncan

Tim Duncan is the Spurs. The Spurs are Tim Duncan. He set the tone for the franchise and all of the stars that followed in his footsteps, including Tony Parker, Manu Ginobili, and now Kawhi Leonard.  And as the city of San Antonio celebrates its fifth title with the Big Fundamental, I cannot help but think about the journey that got us here.

Tim Duncan is the most consistent player ever

Just how solid has Tim Duncan been? Probably the most consistent ever, and I have the data to prove it.

Timmy didn't make the All-Star team, and the coaches that didn't vote for him should be ashamed of themselves.

Tim Duncan is the most consistent player ever Tim Duncan: Still Elite and Underappreciated

True franchise superstars like Tim Duncan come around once or maybe twice in a generation, and the Spurs were fortunate to draft him with their number one pick in 1997. Since then, San Antonio has qualified for the playoffs every season. The only time Timmy wasn't there was during the playoffs in 2000, when he sat because of a torn lateral meniscus in his left knee. Pop's decision to bench his injured franchise player,  and many other decisions since, have helped Duncan continue to play at an elite level long after many other talented players from his era have retired or faded into minor roles, but at the short time cost of an opportunity to take back-to-back titles.

I could list all of Tim Duncan's individual accolades and call it a day, but that would not do justice to Timmy or the Spurs, the team that he has built with Gregg Popovich, R.C. Buford, and Peter Holt over the years. Instead, let's understand how he helped his team get back on top since the Spurs' last title in 2007.

Over the years, Duncan has taken on less of the scoring load, but his presence on the court has helped his teammates get better shots during the playoffs. Since the 2007-2008 playoffs, the Spurs have shot 3 percentage points higher from the field with Duncan on the court, and if you look at the impact that Duncan has on particular players, like Tony Parker, the delta is much greater. During the same time frame, Timmy's presence on the court has improved the shooting efficiency of Tony's lineups by a whopping 24% margin! He is currently on the upswing for the past two postseasons. Interestingly, Timmy shot one of his lowest career percentages from the field (just 47.0%) during the 2012-2013 playoffs. However, he was still averaging 15.7 FGA per 36 minutes, which is higher than his career playoff average. During the 2013-2014 title run, he has provided a 2% lift in field goal percentage for his teammates. 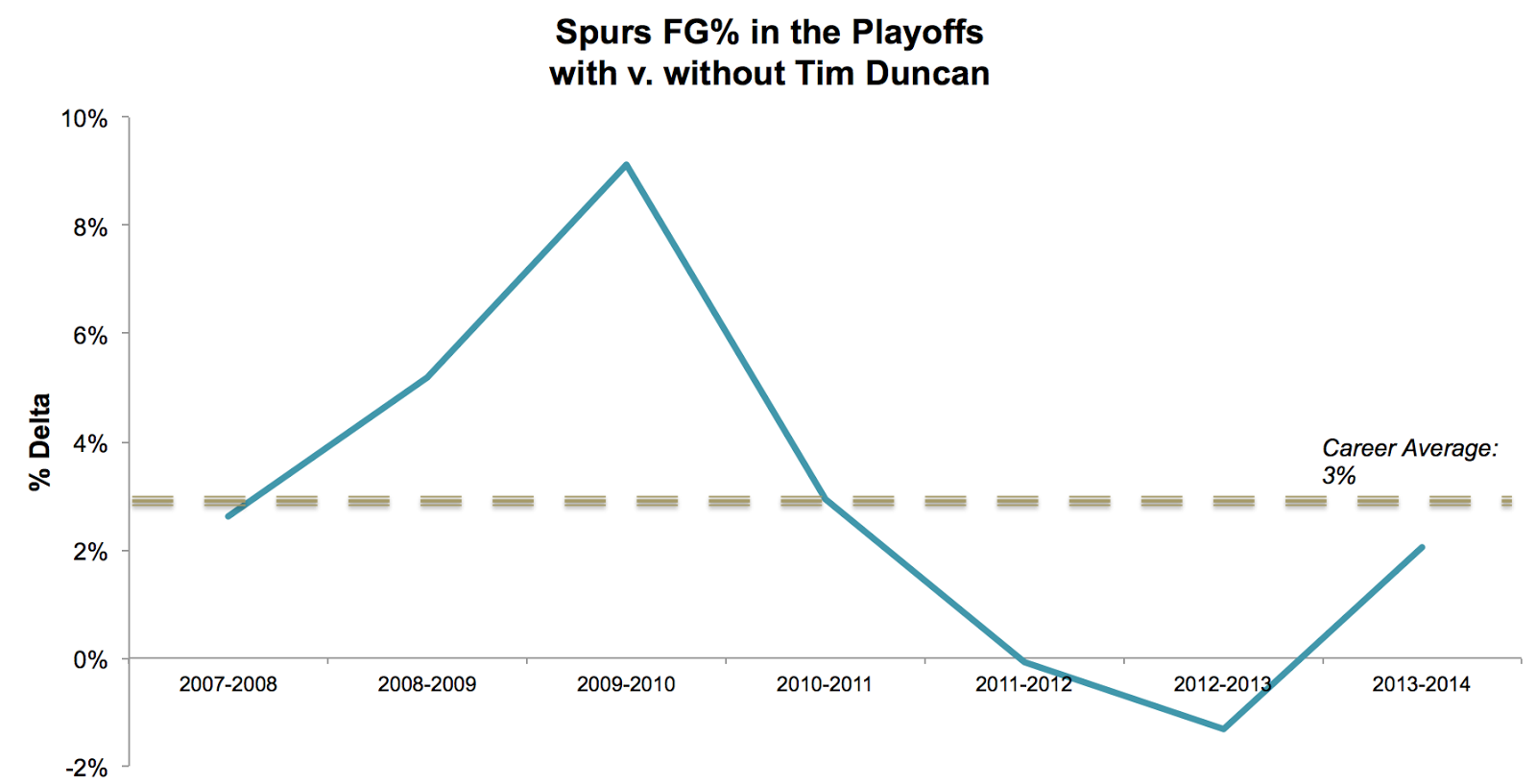 A large part of the increased accuracy from the field comes from strong ball movement. The Spurs' passing during this postseason in particular has been pure, unadulterated coach porn. Though this is a team feat, Tim Duncan is one of the best passers in the NBA as a big man. His unselfish style of play throughout his career has trickled down to the Spurs' role players. Since lineup data became available during the 2007-2008 season, Duncan has provided his team with an 8% lift in assists when he is on the court in the playoffs. It was actually a noteworthy 10% during their most recent run. Since rotations make a huge impact on the game, I will note that 86% of the time Tim Duncan is on the court, Tony Parker is there alongside him. However, Tony's delta since the 2007-2008 playoffs has been half of Tim's, just 4%! 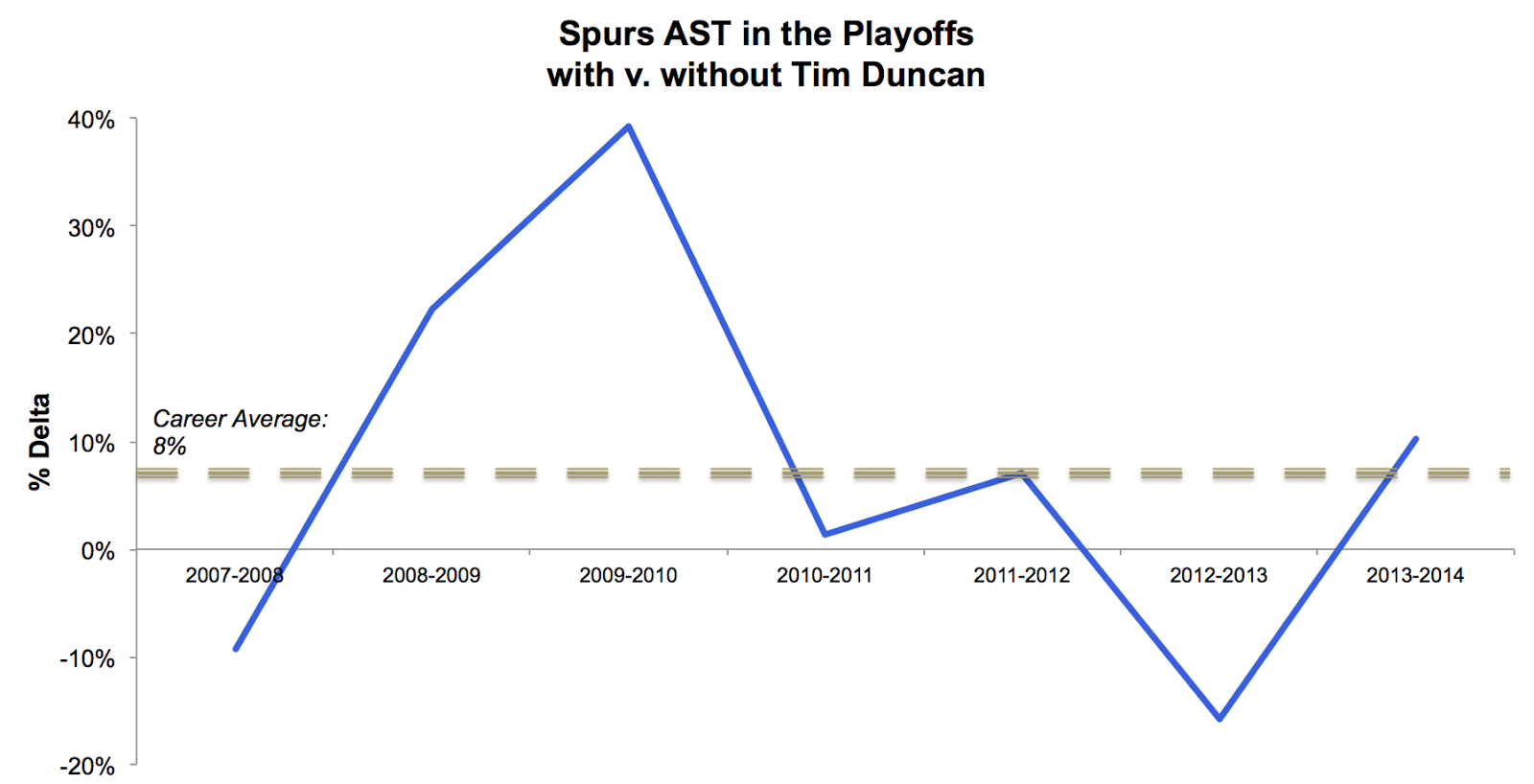 In addition to helping with ball movement, Tim Duncan has been pivotal for the Spurs when it comes to second chance points. Despite being 38 [million] years old, Timmy has led the Spurs in offensive boards this year, averaging 2.8 per game in the playoffs. Keep in mind that the Spurs are generally not known for excelling in second chance points--they were ranked 26th in the league during the 2013-2014 season. Interestingly, his impact is particularly strong when Tony Parker is in the lineup--Timmy provides a 61% increase in second chance points when playing with Tony since the 2007-2008 playoffs. This makes sense since we often see Tim Duncan making key tip-ins or tap outs when Tony Parker fails to finish at the rim. 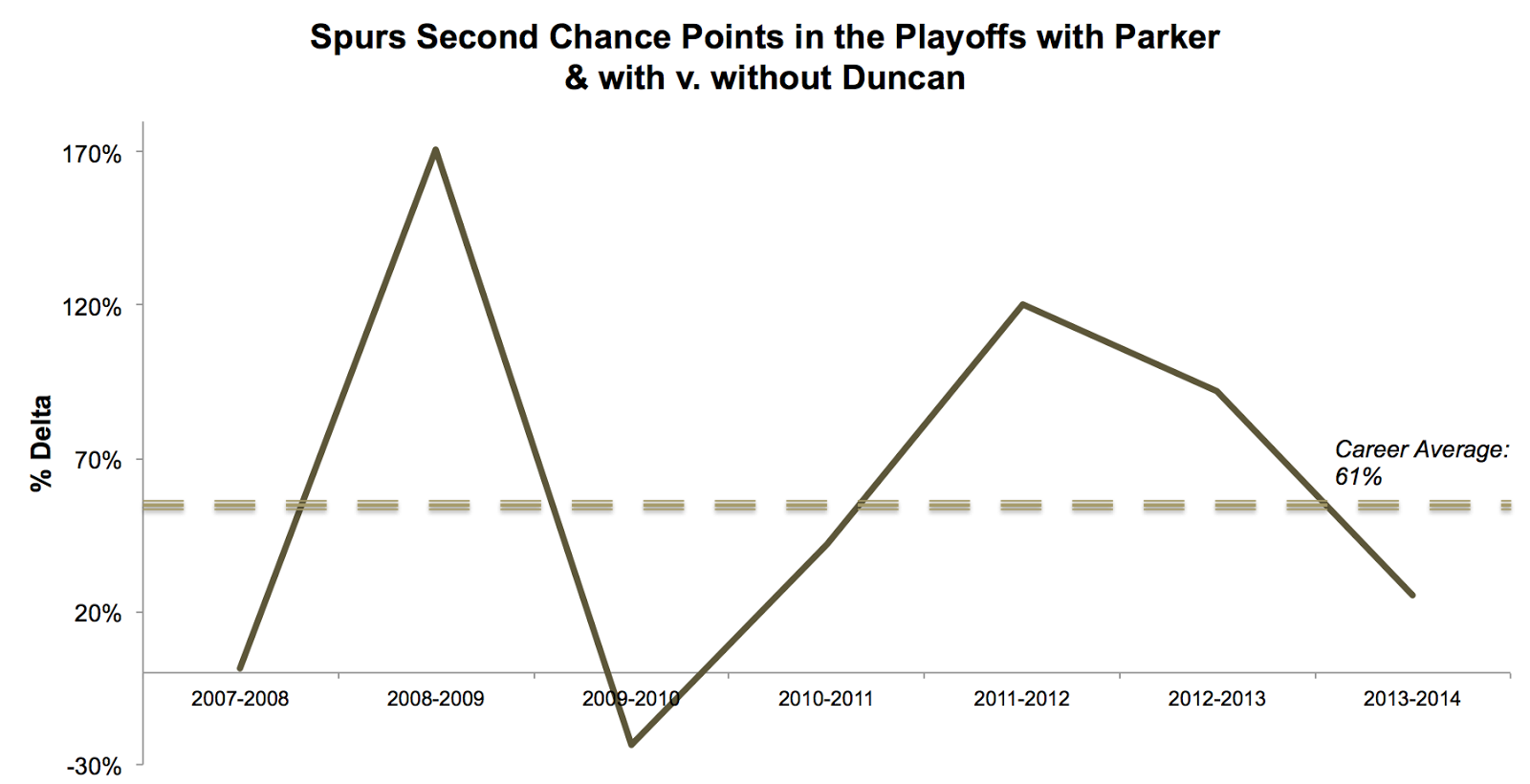 Tim Duncan also has an interesting impact on Manu Ginobili's stats. Over the years, we have watched El Contusion take it to the rim with no real regard for his own body. It is difficult to measure aggressiveness objectively, but free throw attempts are a decently good proxy for this. Since the 2007-2008 playoffs, Manu has attempted 32% more free throws per possession with Timmy on the court versus with him off the court. This is largely because Manu commits fewer turnovers when he shares the floor with Duncan and there is generally better ball movement. During the Spurs' most recent playoff run, this impact has actually dipped below 0. This can be attributed to a lot of the funky lineups that Pop tested out during the Mavericks, Thunder, and Heat series. 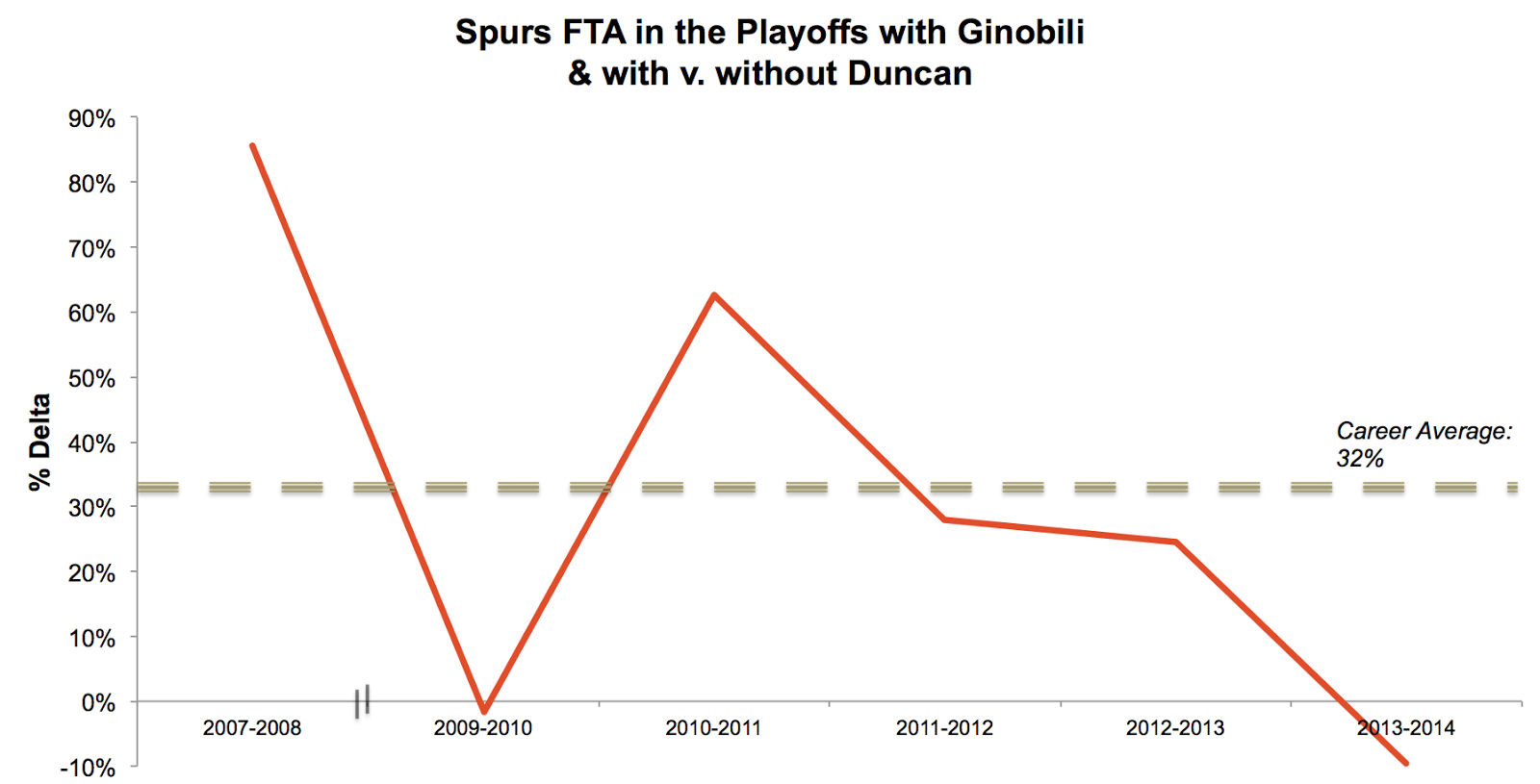 Last but certainly not least, Timmy still puts his mark on defense. The Spurs have been the benchmark for championship-caliber defense for almost two decades. Tim Duncan does his part in protecting the paint. In fact, during the most recent 2013-2014 playoffs, the Spurs allowed 16% fewer points per possession with Timmy on the court versus off the court. He is also proving to be a strong mentor to his defensive-minded prodigy protege, Kawhi Leonard. Though Duncan and Leonard have only had three NBA seasons together, Timmy's coaching and encouragement shines through during games. When Kawhi joined the Spurs during the 2011-2012 season, he prided himself on being a defensive specialist. Though he has a more complete game now, Timmy's presence on the court provides a huge boost to paint defense for Spurs lineups with Kawhi (-21% delta): 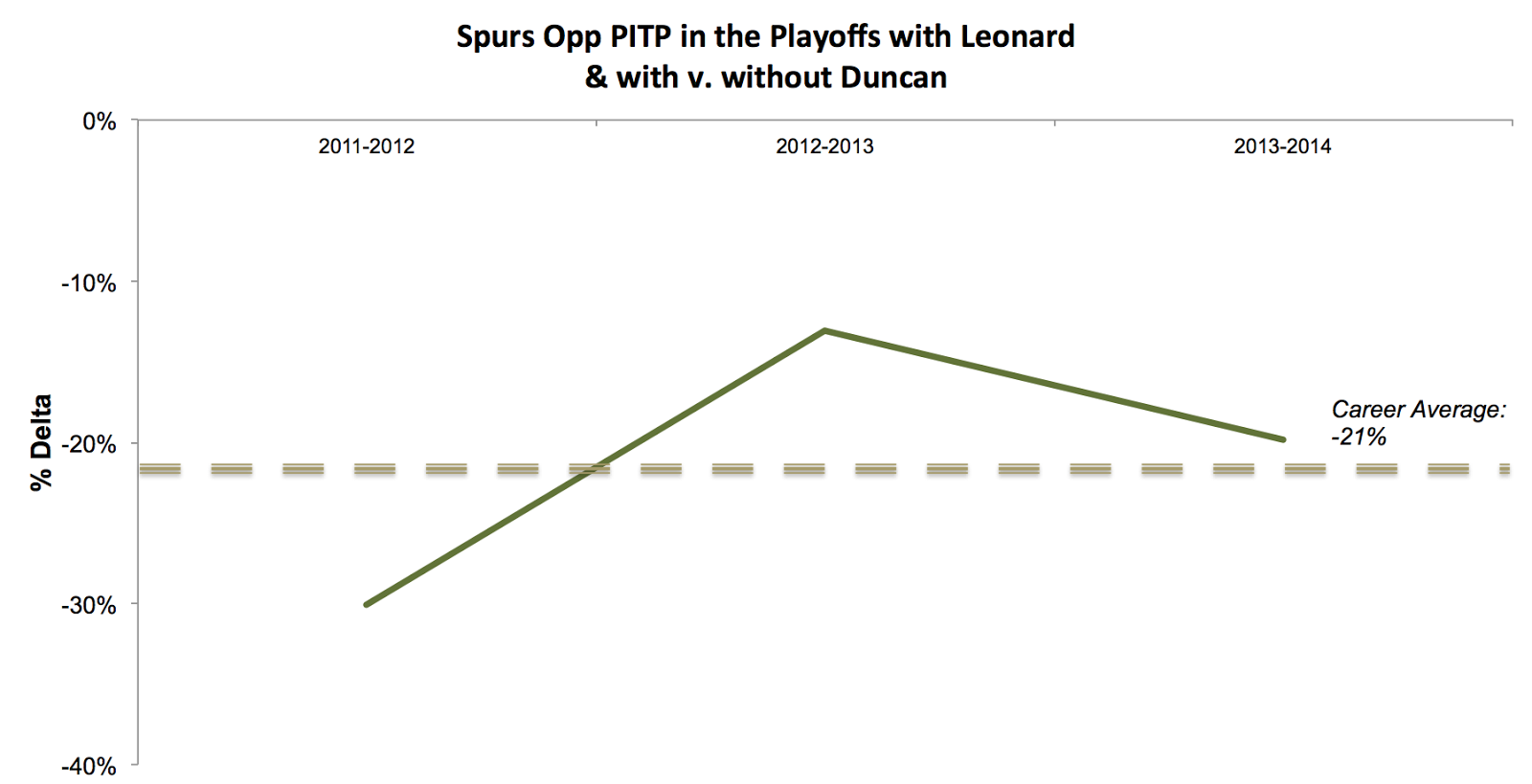 Tim Duncan's journey has really hit home for me. He was drafted when I was just six years old, and the hype surrounding his selection made me pay attention to basketball in the first place. I was a little too young to truly appreciate the Jordan Era, but there was just something about Tim Duncan (and David Robinson) that made me care about the NBA as I got older. The torch was officially passed from Tim Duncan to Kawhi Leonard last night in the form of the Finals MVP trophy, but it does not look like Timmy is ready to walk off the court for good. After all, the Spurs still need to bring home that elusive repeat.