This Spurs title is for the true believers

There are so many reasons to celebrate the Spurs fifth NBA title. Some are overlooked, but important nonetheless.

Share All sharing options for: This Spurs title is for the true believers

There's an old poker adage that comes to mind.

If you can't spot the sucker at the table, then you're the sucker.

That's my friend Danny. He's not a sucker by any means, but he's the friend all of us have. And if you don't have him as a friend, then you're the "Danny."

Danny is the guy that'll wear his Ginobili jersey anywhere, anytime, even if it's just a bit too tight. Danny is the guy that brings Tums to the game watching parties and can't eat because he gets too nervous before tip-off. Danny is the guy that lives or dies with the Spurs and pours his heart into every minute of every game throughout the season and more so during the play-offs. And tonight Danny was the only one in our group ready to head downtown to park in the street and dance with a Spurs flag while his family slept through the night.

Before Game 6 last year we had a plan to watch the game from Buffalo Wild Wings. Having been out of NBA Finals road game watching practice for six years, we naively assumed we could get a good table if we arrived a couple hours early. Needless to say, that plan was not viable when we couldn't even get in the parking lot.

So we found our way to Texas Roadhouse and watched from the bar. Like Spurs fans everywhere, we were celebrating prematurely and storming around the tables, crunching peanuts under our feet and slamming beers. When it all slipped away everyone headed for the exits, except for Danny. He stayed behind, alone at a table with a few tears in his eyes. We tried to console him with the promise of another game to play, but it was no use.

For Game 7 we gathered at a restaurant much earlier with our families in tow. And while the game was close, there was always a dark sense of inevitability in the air. When the game ended we left Danny alone, again.

And I don't think I talked to him for a couple of months. He didn't want to. 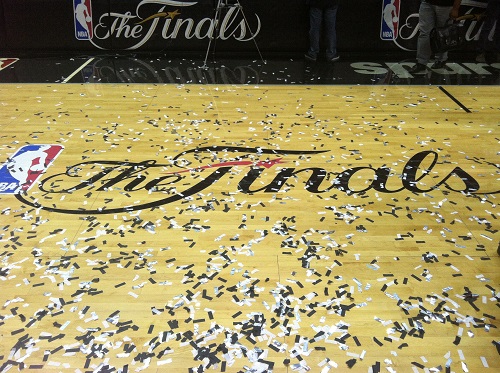 Since the Spurs defeated the Heat in Game 5 on Sunday night there has been ample talk of redemption. But like catching up on sleep, true redemption is impossible. Sure, the Spurs came back and dominated the Heat in 2014 and snatched the title away in convincing fashion. But they still lost last year. No matter how badly they beat the Heat this year--and make no mistake, they destroyed them--it will never fully replace the void left from June of 2013. Like the gambler that can never find happiness in his winnings because he only wishes he'd bet more, the Spurs (and their fans) will always have to live with that pain from those final 29 seconds on that steamy Miami night in 2013.

And while that scar tissue might fade, it will never fully disappear. That's what made the Spurs rebound and success this year so fulfilling and extraordinary. It was incredibly difficult for the fans to jump back onboard after such heartbreak as the team trudged along through the regular season. It was evident from the start that fans were reluctant to fully embrace the possibility that this team might be able to climb back to the top of the mountain. But slowly they did. Even after the pain, they did. Scar tissue be damned. The Spurs methodically marched back toward their goal, and one by one the fans gave themselves back to this team.

Last year was a devastating sense of betrayal for those that love the Spurs. Not by the team or organization, but by their own hearts. So many allowed themselves to be vulnerable, to believe that this group of aging veterans had one final run in them and they came so painfully close. Spurs fans have been preparing themselves for the end of the Duncan/Ginobili era for several years so it truly was a traumatic experience to have what many believed would be one final championship for these iconic figures so quickly ripped away.

But then this team went out and did the impossible. They somehow found a way to use that devastation to fuel them on another championship run. They pulled themselves off the mat and continued charging forward, carrying a reluctant fan base on their shoulders who were quite naturally kicking and screaming in protest until the very end.

That's why the chants of GO SPURS GO in the arena Sunday night were so guttural, so cathartic. 20,000 anxiously watching the action on the court along with millions worldwide were finally allowed to rid themselves of that stubborn pain that never seemed to go away. The sounds inside the AT&T Center were of release. Believers embracing the joy that they had so reluctantly allowed themselves the opportunity to look forward to again. It's the sign of a smart, cautious fan base. So forgive them all for a year's worth of pent up emotion.

And speaking of those fans. As I write this, ESPN is on in the background and I can hear Bill Simmons and Sage Steele discussing how the Spurs are a blue collar team and San Antonio is a blue collar town with blue collar fans. While that might be true for the most part, it also discounts the intelligence of those that live and die with this team. Taken out of context it can imply a lack of sophistication. It can paint an image of a rowdy, impulsive fan base that often acts irrationally and searches out perceived slights for hobby.

But that's the great disconnect between the national media that descends on San Antonio for a few weeks a year, and those of us that watch this monolithic machine on a daily basis. This fan base is intelligent because they've been watching the smartest basketball played in the world for almost 20 years. Yes it's a blue collar city, but it's also blue blooded in its NBA royalty.

I've had more than my fill of national reporters condescendingly scolding their readers--many of whom are Spurs fans-- for their ridiculous schizophrenic tendencies and mocking their confusing, jaded confidence. Because they can't and won't understand. They don't spend enough time in our community or around our organization to understand. They have no idea how painful that loss in 2013 was and how fulfilling the run this year has been. They can't comprehend how as the Spurs kept winning, a community found their confidence again and cautiously but boldly united behind this group of embattled but loveable basketball players.

Which brings me back to Danny.

The national media will be on flights back to their hometowns on Monday and won't have to concern themselves with San Antonio for another ten or eleven months. R.C. Buford and Gregg Popovich will celebrate for a few minutes before getting ready for the draft, then summer league, and then next season. Tim Duncan will decide his future in basketball while Boris Diaw and Patty Mills decide if they want to continue to be Spurs.

And for the next few days a city and all of Spurs Nation will celebrate an historic championship. Not a redeeming one mind you, but a championship that is a year overdue. I'm thrilled for Gregg Popovich who poured his heart into this entire season to get back to this place. I'm ecstatic for Tim and Manu Ginobili and Tony Parker and the fact that they got to share this in this elation together at least one more time. And Kawhi, who seemed to finally find the sunshine after stepping out of so many large shadows. I'm thrilled for all the guys that worked so hard to get this ring, whether it's their first or otherwise.

I'm also happy for everyone in the Spurs family. Fred and Gion, the security guys who are always so nice to me while I watched the players warming up before the game. Elizabeth who always had a welcoming smile as she stood outside the Black and Silver club outside the player's locker room. And all the local media that treated me like one of the guys, virtually from day one. I'm happy for all of them and I'm glad to consider them friends.

But mostly I'm happy for Danny, and all the Danny's that are celebrating what they've waited so long for.

While I was sitting in the press room listening to Gregg Popovich not answer questions, Danny sent this group text as my buddies were deciding whether or not they'd leave their families at home and head downtown. 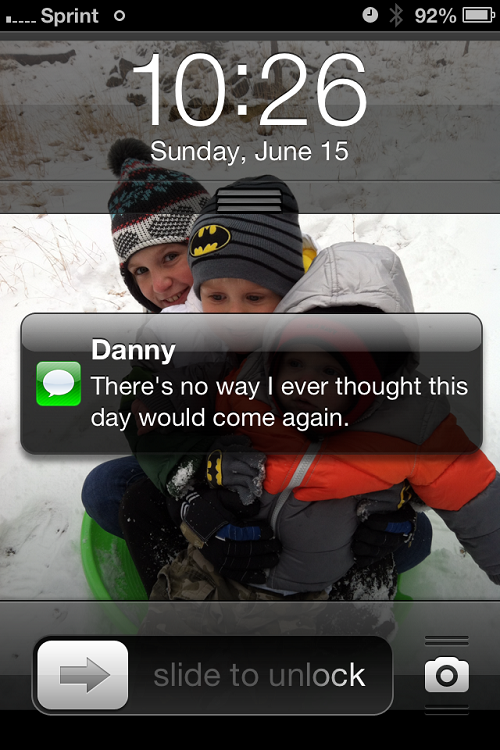 But it did Danny. The day is here. Enjoy it.