Kawhi Leonard showed up after playing sub-par in the first couple of games and led the Spurs to a Game Three victory.

The Spurs' offense in the first quarter was a thing of beauty. San Antonio dropped 41 points on the Heat in the opening quarter. It bordered on perfection. If you are a fan of the Spurs or team basketball it was enough to induce bliss. This sequence literally gave me goose bumps

The Spurs continued their amazine offensive performance for the first five minutes of the second, hitting 19 of their first 21 field goal attempts and taking a 56-32 lead at the seven minute mark. The Spurs had made their last ten shots before Tony Parker had to attempt a late-in-the-shot clock, deep triple. The Heat hung in the game with a barrage of three-pointers, hitting four in just three minutes. But the Spurs went on to finish the half in strong fashion and took a 71-50 lead into the break. The Spurs' 75.8% shooting mark for the first half is the best in the history of the Finals. Here's their first half shot chart. 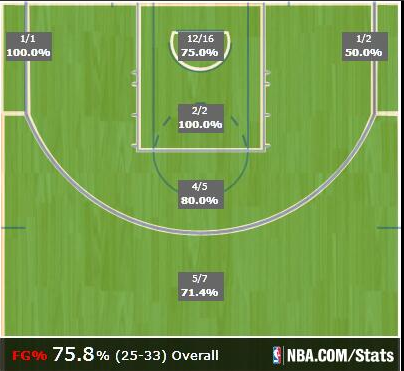 The third quarter started with the Heat trimming the lead down to 15 in just 46 seconds. Miami was the more aggressive team and the Spurs had trouble getting the ball to drop against a dialed in Miami defense. Over the first four minutes of the quarter the Spurs missed four of their five shots and turned the ball over three times. At the halfway point of the quarter San Antonio's lead was just 13.

The case for the Spurs losing Game 4

The second of two companion articles examining the arguments for and against San Antonio winning tonight in Miami to take a 3-1 lead.

The case for the Spurs winning Game 4

The first of two companion articles examining the arguments for and against San Antonio winning tonight in Miami to take a 3-1 lead.

SA pushed it back up to 17 and then the Heat went on a 10-0 run. A once 25-point lead had been cut to seven. The momentum was fully with the Heat and their crowd went nuts. I don't know about you guys, but my stomach was in knots. Marco Belinelli then missed a bunny, but he made up for it by hitting a big three-ball before Boris Diaw had a patient and successful post possession. The Spurs avoided a total meltdown and took an 11-point point lead into the final quarter.

Basically the Spurs' third quarter was as bad as their first half was good. The good guys managed just 15 points over the 12 minutes.

The Spurs bounced back in the fourth behind Kawhi's strong performance. The young man scored nine of his 29 points in the quarter and the Spurs convincingly won Game Three and wrested home court back from Miami.

This team is so easy to root for.