NBA Finals: What went wrong for the Spurs in the 4th quarter of Game 2

We'll look at a couple crucial plays that got away from the Spurs in winning time of Game 2, and discuss what the silver and black can do to prevent them from happening again later in the series.

Share All sharing options for: NBA Finals: What went wrong for the Spurs in the 4th quarter of Game 2

The Spurs lost Game 2 on Sunday for a variety of reasons. The Spurs' offense stalled a little too often. They missed free throws. Their best defenders ran into foul trouble. LeBron James did what one would expect the best basketball player in the world would do when faced with unwarranted scrutiny.

With 2 minutes to go in the game, the Spurs were still up one point. They had a chance to close out a close, crucial game as they have done so many times before. The Heat are a fantastic team, but the Spurs should be able to close out a game versus anyone with their great experience and coaching, right?

The Heat were the ones who made the necessary plays down the stretch, getting stops and scoring at will -- looking like the defending champions they are.

We'll begin at the 2:00 mark exactly. Chris Bosh just missed a contested three point attempt, the Spurs rebound, and Tony Parker brings it up the floor, guarded by James. Miami's defense is switching every single screen, both on and off the ball. 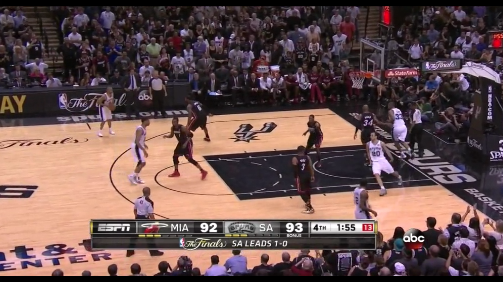 The Spurs run a play that aims to get Manu the ball off a screen at the top of the key, and get him an option of driving hard to the basket or kicking out to Tim Duncan for a midrange jumper. However, because of the Heat switch everything while communicating so well, Manu's chance to get the ball off the screen is denied by a fast-trailing Dwyane Wade, and Chris Bosh waiting patiently at the rim. Tony Parker doesn't pull the trigger on the pass, and Manu loops out again to the right wing. 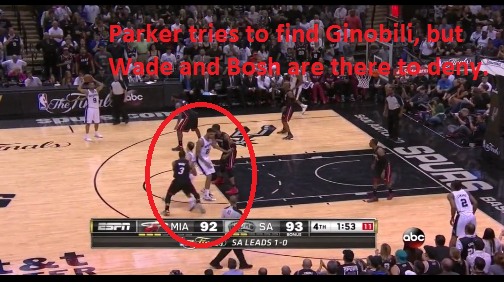 Then, Duncan tries to take the front from Wade into the paint for a lob pass, but then Bosh rotates over to help and there's no angle to get the pass in cleanly, so Parker declines.

At this point, the Spurs are late in the shot clock, with about 8 seconds left. Parker has already started his dribble against LeBron. He attacks once, only to have it cut off by the 6-8 LeBron. There is no secondary action for Parker. There is no help. The offense has stagnated, and with 6 seconds left in the clock, it is up to Parker to make some sort of incredible play to save the possession. 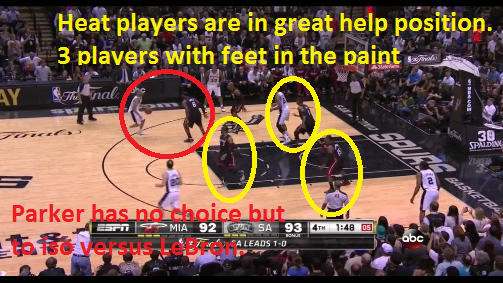 He drives down the right side of the paint, quickly feigns putting up a shot, but James stays grounded. There is no reason to jump. He just has to stay grounded, stay vertical, and it will be Heat ball soon. Parker makes one more fake, tries to wedge his shoulder in to create space, but is stripped as soon as he faces James directly. The ball goes out of bounds, and is called Spurs' ball with 0.8 seconds left on the clock. 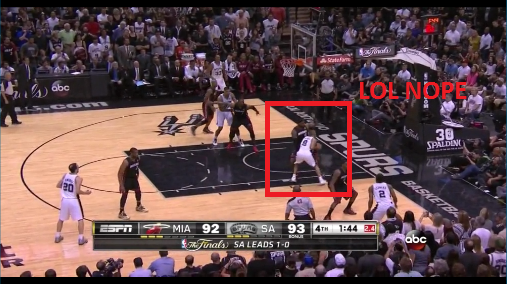 All there is time for is a designed quick heave off an out-of-bounds play. The Spurs get a decent look, a Ginobili three from the right wing, but it is rushed, and to the left, and clangs off the rim. A valiant effort, but the possession was lost the second Tony Parker was isolated against an excellent defender who has 6 inches and 65 pounds on Parker.

What prevents this from happening again: Fixing what happened here doesn't really concern X's and O's much. It's simple, and it's a cliche answer, but San Antonio really just needs to execute better here. Cuts need to be harder. There needs to be more urgency. After the first action is unsuccessful, there needs to be some type of second action in place to keep the possession alive. Hats off to Miami's defense, though. On this possession they communicated and competed at a high level. Once they started putting LeBron on Parker and switching screens, the Spurs stopped moving. The same thing happened versus Dallas in Round 1, and versus OKC in games 3 and 4. Once you take away Parker getting to the middle, the offense sputters.

That was an important stop for Miami. and gave them the ball with 1:38 left, with a red-hot LeBron James that no Spur could guard alone.

With the deficit only at one point, and the clock ticking down, the Heat wanted to use up as much clock as possible, minimizing San Antonio's chances of regaining the lead should Miami score on this possession. With that in mind, LeBron brings the ball up slowly, surveying the floor until there are about 15 seconds left on the shot clock, and James gets ready for a teammate to set a pick.

The Heat teammate isn't a big man, though. The Heat are playing small. Chris Bosh is the biggest Heat player on the floor, but he's spotting up in the corner, waiting for the play to unfold. The pick is set by Mario Chalmers, the point guard, who is being guarded by Parker. 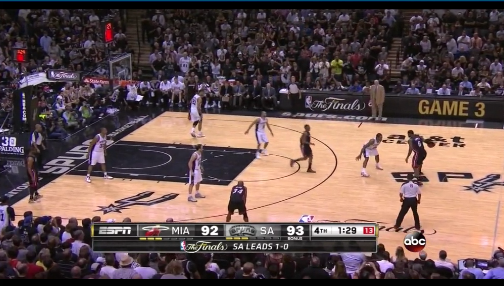 James rejects the screen at first, opting to drift to the right to set Kawhi Leonard up for a drive.

Chalmers pops back up to the top of the arc to free up space for LeBron, but as soon as LeBron is ready to drive, Chalmers attacks Parker, and drives him back to impede the path of Leonard.This hard-nosed play by Chalmers frees LeBron up, and forces Tim Duncan to come off of his man to prevent James from getting to the basket. 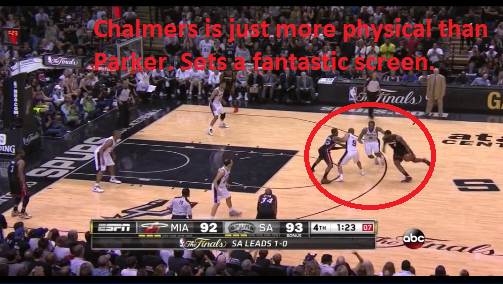 There's one problem here for the Spurs, and it's kind of a big one. Tim Duncan absolutely had to come up to stop LeBron, because LeBron at the basket is two points either through a layup or free throws. The issue is that because the Heat are small, Tim Duncan can't just leave someone like Chris Andersen in the paint to help. So, Duncan leaves Chris Bosh, who is standing in the right corner, his sweet spot. 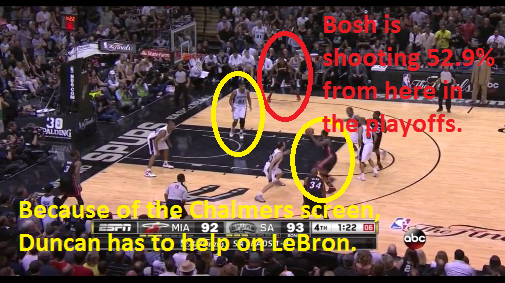 LeBron, forever making the correct basketball play, sees this and fires a pinpoint pass to Bosh. There's no time for the Spurs to recover now. Bosh puts up the shot. Splash.

What prevents this from happening again: This LeBron/Chalmers pick-and-pop is a nice little late game wrinkle from Heat coach Erik Spoelstra, and considering how well it worked in the late stages of this game, I would expect it to return at some point in this series. It was obvious that Tony Parker wasn't ready for this action. Chalmers just plain out-toughed Parker when setting that screen, and then Parker got turned around, confused about what to do next. That set off the chain reaction that led to the Bosh 3. Miami has shooters all over the floor, and if there's even the slightest bit of hesitation or a mistake, they will take full advantage of it. If Parker is ready for it next time, the Spurs should be able to let him hedge LeBron for a brief count to get Kawhi back on him, and then Parker will have to scramble back to Chalmers to avoid a three. And even with that, James can still bullrush his way to the rim for a free throw opportunity. This action will be tough to stop, period.

These possessions are not the full reason why the Spurs lost, but the end game of a close contest often feels like it determines the game. The possessions after the Bosh 3 could have given the Spurs back the lead, or at least tied it. But Ginobili turned the ball over and the Heat ran that LeBron/Chalmers pick-and-pop again and then the game was effectively over.

The plays were where the game turned though. The Heat defense forced San Antonio into uncomfortable positions, and that the Spurs couldn't get a bucket when they needed to. The Bosh three pointer highlighted a great action from Spoelstra, one that took the Spurs unprepared. With Gregg Popovich as their coach, the Spurs should be ready for situations like these if they arise again. Here's hoping they're able to make the necessary adjustments.