Portland's peculiar blend of copious mid-range jumpers and lethal perimeter shooting has the chance to create more than a few problems for San Antonio in this series. What must the Spurs do to prevent an Aldridge-inspired rampage?

After escaping an excruciatingly close series between two teams of conflicting offensive philosophies in the opening round, the Portland Trail Blazers are the Spurs' opponents in the Western Conference Semifinals. The Blazers dramatically pipped the Houston Rockets at the post, claiming victory within six games in a series where they were outscored on aggregate by two points (670-672).

This windy playoff road has led its travellers to a curious meeting of strategies: a defensive scheme oriented toward encouraging opponents' mid-range attempts (Spurs), and a team that sourced 20.4% of its total points during the regular season from exactly that region of the floor (Blazers). The Blazers encountered success in allowing their outside attack and ample mid-range efforts to gear the league's fifth ranked offense, netting 108.3 points per one hundred possessions. While the differing outlooks offer an added element of intrigue, trying to extract any substance from the four regular season meetings between the two squads can be pretty hollow.

San Antonio split the season series (2-2) with Portland, with the most recent matchup taking place in mid-March. The primary problem with mining for knowledge in these bouts is that three of the four dates featured significantly watered down lineups. Danny Green, Tiago Splitter, Tony Parker, Tim Duncan, and LaMarcus Aldridge were all absent for at least one entire game in the season series.

Where can we gauge how the jigsaw of this Spurs-Blazers matchup comes together?

You can expect the Spurs to continue to try to drive their opponents away from the three-point line -- the Blazers sat in the top five in both makes (770) and attempts (2071) from downtown this season -- however, the question marks arise in the real estate in between the arc and the basket. LaMarcus Aldridge has been the patron saint of the long two all season long, and the difficulty of doubling him (and his polished post arsenal) and leaving the Blazers' cupboard full of perimeter marksmen is mirrored in the team's scoring breakdown: 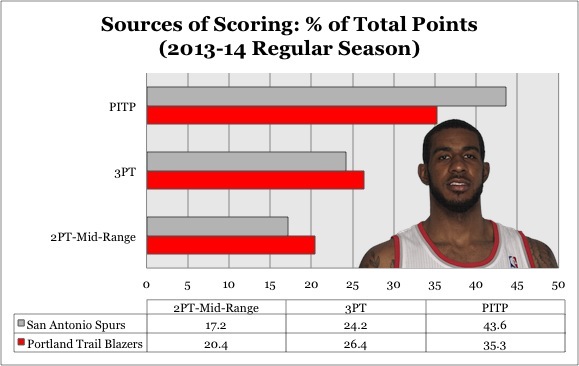 Aldridge's in-between game blossomed both during the season and in eliminating the Rockets in the first round, acting as the perfect fulcrum for the oddly-balanced attack, and a sturdy offensive weapon. Across Portland's six opening round games, Aldridge put up 14.0 mid-range jumpers per game. A concern for Pop's platoon in the upcoming series is that this unique approach resulted in the Blazers' forward being only one of four players in the NBA to shoot above 42.0% from the middle of the floor on more than 500 total attempts. It poses the Spurs with a delicate balance between running guards off of the three-point arc, preventing easy baskets, and micro-managing Aldridge's tricky, patented maneuver.

The Blazers often look to find their franchise forward in space about sixteen feet from the basket, whether on a deliberate post-up play, or as part of a pre-designed set. Throughout their first round matchup, one go-to setup drew a wing player (typically Batum or Matthews) rolling out from a baseline screen, catching at the 45° angle behind the arc, dumping it into Aldridge, and overloading one side of the floor. 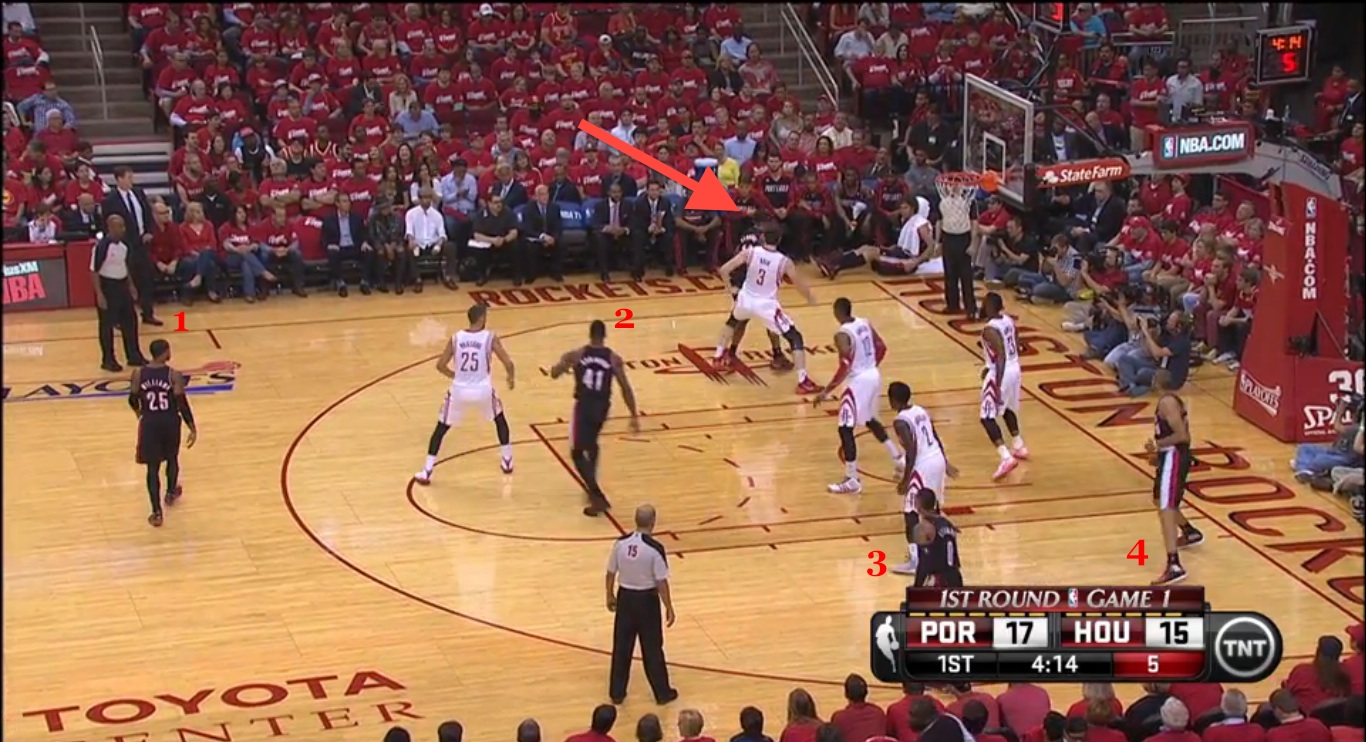 This textbook isolation layout allowed the Blazers' All-Star to go to work on whomever was guarding him (Terrence Jones, Omer Asik, Dwight Howard) -- more often than not in a one-on-one scenario. A post-up play of this nature may not strike fear into the hearts of Spurs fans if Tim Duncan can be hastily dispatched to lockdown the 6-11 four man, but it's Aldridge's versatility that throws a spanner into the works.

The Rockets were hesitant to assign Omer Asik to Aldridge in the early stages, and it proved costly. Aside from conventional wisdom, don't be surprised to see the Spurs learn from this, or to see it affect how Tiago Splitter's minutes on Aldridge unfold. Portland tends to welcome the chance to involve Aldridge's man in a high screen situation, something that Splitter is well versed in dealing with. 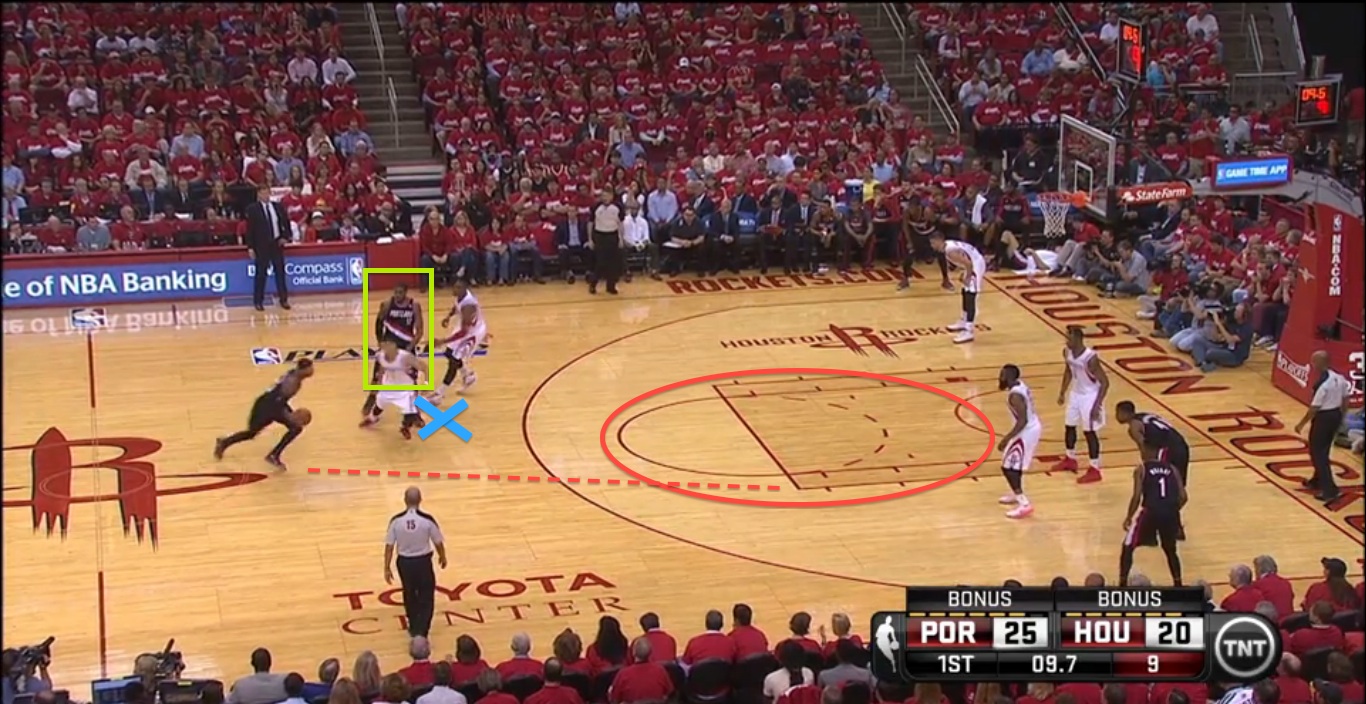 This Terry Stotts-engineered offense creates a slew of options by planting shooters in either corner, kickstarting the action with Aldridge and the lead guard about twenty-eight feet from the goal, and leaving a dangerous whirlpool of space around the free throw line. The defense must discern between some combination of an Aldridge pick-and-pop, allowing Aldridge to be the roll man, forcing a line drive from the ballhandler, and crowding the corners. This is where Splitter's expertise at showing hard on the pick and retreating to his man shines through and flickers like an oversized neon light. The reliability and agility of the Brazilian will be pivotal to any efforts to halt Portland's primary scorer.

What about the secondary effects of having Aldridge on the floor? Damian Lillard, Nicolas Batum, and Wesley Matthews combined to nail 45 of 120 threes (37.5%) in the jet-powered first round series that saw Portland comfortably (1.118) nudge above one point scored per possession. That's far from a mind-blowing clip, but it's a healthy, above-average conversion that (if sustained) can cause damage in a lengthy series.

The "Aldridge plus threes" formula (although oversimplified) is productive, and established the framework for Rip City's successes. The Spurs are just 10-18 this season (inc. playoffs) when their opponents score at least 105 points, per Basketball-Reference, and that figure is a legitimate, nightly threat for a Portland contingent that played at the league's tenth-fastest pace. On the flip side, one area where the Spurs have reason to feel confident is in preventing cheap points.

The Blazers' offensive rebounding is elite, swallowing between 27 and 28% of the available boards for much of the season. And Aldridge, specifically, gorged on easy baskets in the Houston series, racking up 5.4 second chance points per 36 minutes. A stable mid-range game, peppering the opponent from the outside, capitalizing on easy openings, and leading the league in conversion at the charity stripe is an offensive hotpot. But is it one capable of challenging these Spurs?

LMA put together ten games this season (including his 46-point playoff outburst) with a minimum of five offensive rebounds, despite his status as a relatively average offensive glass eater. Aldridge's knack for positioning, coupled with the top-ten level contributions of Robin Lopez and Thomas Robinson, molded the team's favorable rebounding outcome. Here are a few samples from his premier showings on the boards, captured to highlight Aldridge's location at the point of release on the field goal attempt: 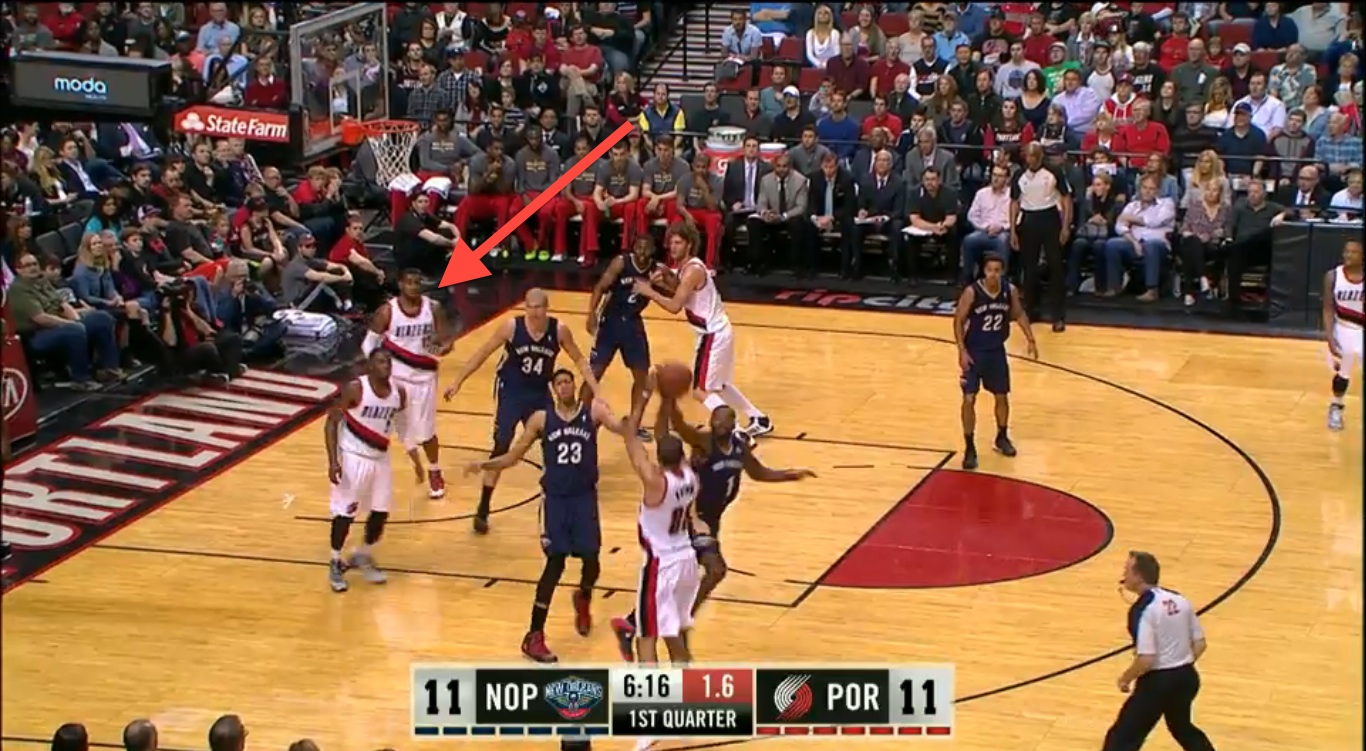 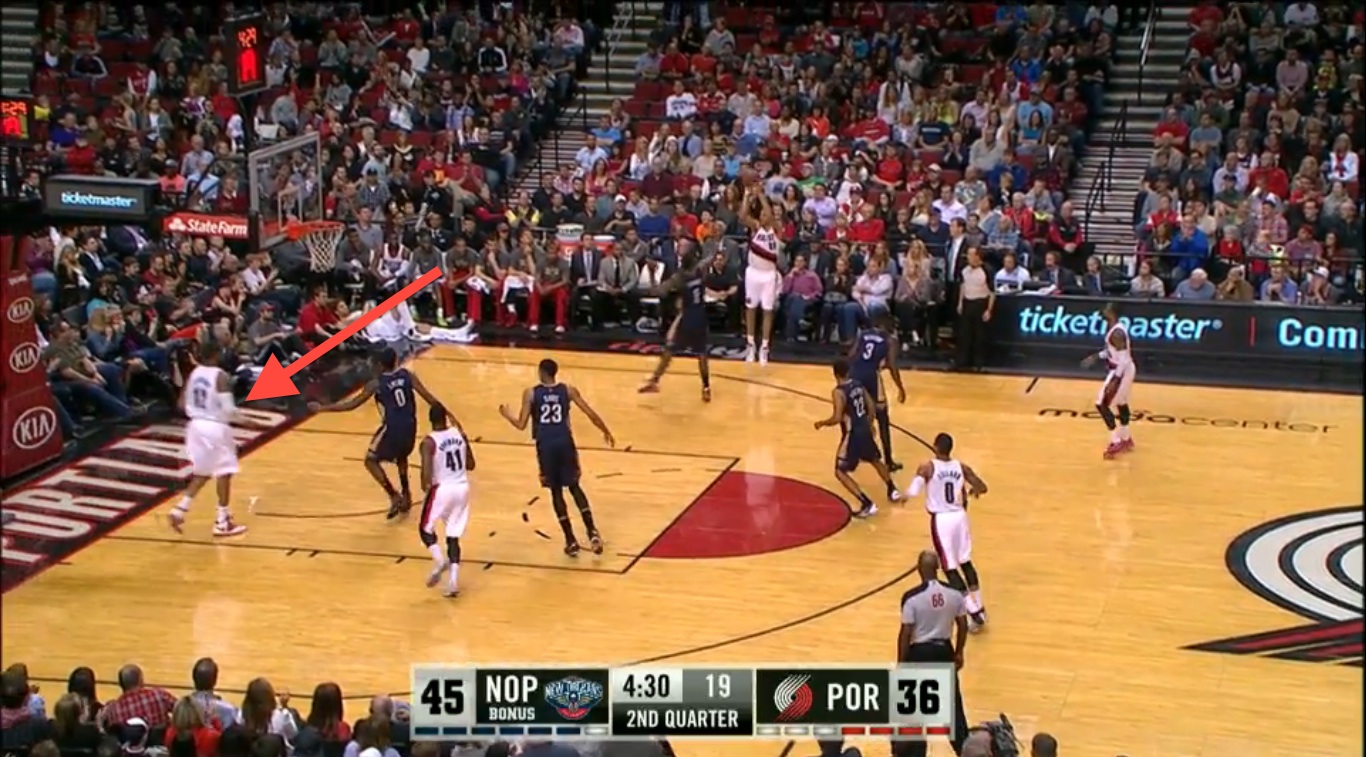 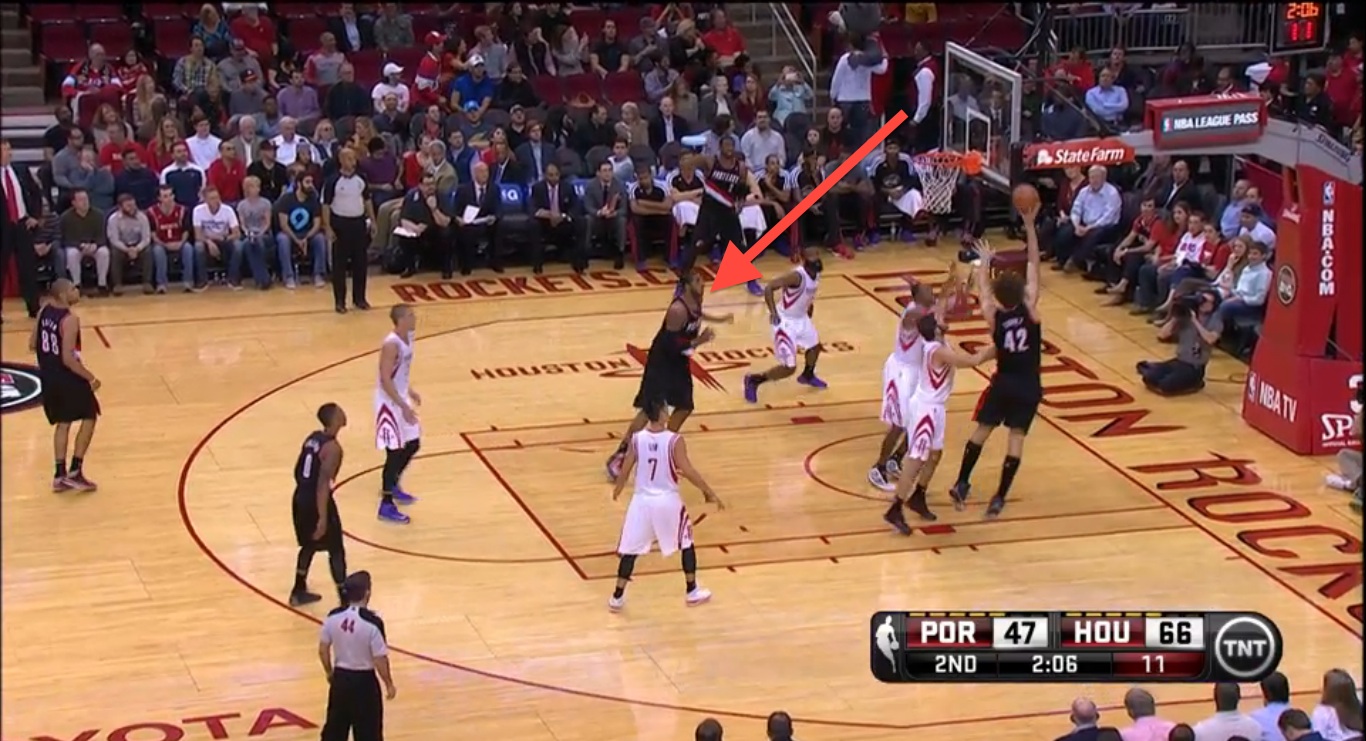 These snapshots -- along with countless others that could have been thrown into the mix -- are fairly damning (in terms of positioning) for the respective opponents.

This crafty interior behavior is likely to subside in a series against one of the league's most rigid defensive units. He may have burned the Spurs' divisional foes with second chance buckets, but given that San Antonio carry top-five weight in both avoiding fouls and suffocating opponents' rebounding efforts, Aldridge's averages should slide back to a more realistic, pedestrian 3.0-3.5 points per 36 on secondary opportunities.

Whittling down that chunk of scoring with the solidarity of the Splitter-Duncan combination, and keeping the Blazers away from the free throw line, should institute a considerable difference to Portland's exotic first round dance. With foul trouble rarely serving as a roadblock, this series will put forth the perfect window for Tiago Splitter to breach the 30.0 minutes per game platform. The above evidence is illustrative of the need to tweak the floor time split between the Spurs' frontcourt defenders -- not dissimilar to the way that the duties of guarding Dirk Nowitzki were handled in round one.

Tales of mismatches, hot shooting, and awkward defensive assignments cast headlines in this series, yet ultimately, no agenda is more pressing than that of containing LaMarcus Aldridge. Fresh from the unexpected seven game push by Dallas, the Spurs remain well-placed to combat the offensive momentum juggernaut that propelled the Blazers into the second round for the first time in fourteen years. Hedging on pick-and-rolls from time to time, clogging the restricted area, and showing faith in the team's one-on-one defenders is a multi-faceted path to hindering Aldridge's offensive forays.

Nipping Aldridge's elevated play in the bud is a tricky task, but it's one that is far from insurmountable for San Antonio's stolid front line.

Statistics utilized are courtesy of NBA.com/stats, unless otherwise noted.