There's no quick fix for the Spurs against the Thunder

The Spurs should explore changes in the strategy or their lineups, but if the Thunder don't fall back to earth, none of that will matter

Share All sharing options for: There's no quick fix for the Spurs against the Thunder

Since the shift in the momentum of the series coincided with Ibaka's return and Brooks decision to give Collison's and Sefolosha's minutes to Adams and Lamb, all eyes seem to be on Pop now to see what adjustment he makes. But the Spurs might not need and, most importantly, might not be able to change the series with personnel adjustments. Here's why:

The athletic advantage is real, and there's no fix for it

We've heard it so many times that it has become a cliché almost devoid of meaning, but the truth is that the Thunder hold a significant athletic advantage over the Spurs. And it's one that could determine the outcome of the series. It manifests itself in two distinct but related areas: attacking and protecting the rim. The Spurs try to take away the three by playing close outside, which means Durant and Westbrook can usually blow by the first defender and challenge a rim protector.

Duncan and Splitter are fantastic at being in the right position under the rim and challenging the shot. But because Westbrook and Durant are so athletic and have such great body control, changing the shot is not a problem.  If the Spurs' rim protectors try to be more aggressive and meet them before they get to the rim, they risk getting burned, as either of those guys can accelerate past them. The Spurs don't have players like that. Ginobili is crafty but plays below the rim. Leonard is athletic but doesn't have the handles or the first step to get to the bucket. Parker comes closest to matching OKC based on his quickness but he can't rise and decide what to do in the air like Durant and Westbrook can.

The Spurs' offense often makes up for its limitations by causing breakdowns on the defense and creating open shots.  By the time the opponent's big realizes that he is not in position, the ball has already gone through the hoop. But OKC has Ibaka, who can cover a ridiculous amount of ground in a short period of time and get to shots he should have no business altering. And since the Spurs have no stretch big man to draw him or any of the other bigs out of the paint, he can help high on pick and rolls if he wants to but otherwise gets to stay close to the rim.

So the Thunder dribble drivers can score even if the Spurs rim protectors are in perfect position but the Spurs dribble drivers might not be able to score even if the Thunder's rim protectors start out in bad position. That huge advantage allows OKC to gamble knowing that there is a last line of defense and to turn bad offensive possessions into buckets at the rim or trips to the foul line with a drive.

Unfortunately, the Spurs don't have anyone on their bench that can help cancel that advantage. Ayres and Baynes are more athletic than Splitter, Duncan and Diaw but extremely limited on both ends. And Mills and Joseph are quicker and have a better handle than Leonard and Green but don't excel at finishing at the rim.

Splitter is only part of the problem

We know who Splitter is. He plays great defense, sets screens and moves the ball. If the offense is clicking he will get shots around the rim or free throws. If not, he doesn't do much for the Spurs on offense. He is slow to get up and can't jump high, so he won't be dunking on arguably the best shot blocker in the league. And he's been poor on the defensive boards. So if he loses minutes to Diaw in an effort to give the offense another dimension, that's fine. Andrew McNeill made the case for that scenario here.

But here's the problem: Diaw doesn't change the game plan for the Thunder at all, especially in traditional lineups. He doesn't draw Ibaka out of the paint. How many times has Diaw stood all alone beyond the arc in this series? That's not a coincidence. OKC will live with Diaw shooting because they know he is extremely reluctant to take those threes and has never showed that he can sustain his efficiency with increased attempts. Here's a play in which the Spurs have  Diaw come out of a Duncan screen as a shooter:

Ibaka is not concerned in the least about the possibility of Diaw catching and shooting. He stays back. That happens constantly and will continue to happen.

So Diaw's presence won't draw Ibaka out but he can probably post him up and try to take advantage of his over eagerness to draw a foul or two. Except the other big will be waiting to block his shot even if he gets past Ibaka, because OKC doesn't respect Duncan's mid-range jumper either. And why should they? Here's Duncan's shot chart for the series: 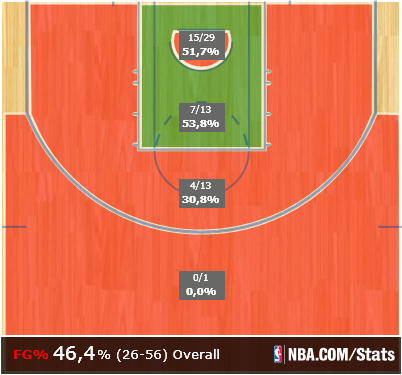 So the spacing is the real issue and it will not improve even if Splitter sits.

Game 3 was a close game. The Spurs were out executing the Thunder in the third quarter and could have completely erased the deficit had it not been for the 22 free throw attempts OKC got. The reason they got in the bonus early was because the Spurs were forcing up shots or turning the ball over and had to foul in transition. Those first five fouls were all shooting fouls. After that, OKC simply forced contact and survived their offensive lull by shooting free throws. Then, after a controversial call killed the Spurs momentum, they went on a little run in the fourth quarter and closed the game.

Game 4 was close for almost a half. OKC seemed in control but couldn't get separation. It was a six point game, mostly. And that point, anyone not named Kevin Durant was struggling in half court offense. What fueled their runs were Westbrook's steals and the transition buckets that resulted from them. They were finally able to pull away when Durant scored a three after a breakdown by the Spurs' zone, then a two on Danny Green and finally a transition corner three after a Westbrook steal. The lead bloomed to 14, the first half ended and the Spurs could never close the gap.

Those two games can be characterized as outliers. The free throw disparity in game 3 was gigantic and without it, the Spurs could have actually gone into the fourth quarter with the lead. OKC averages 16 fast break points per game in the playoffs and had 21 in game 4. Those points were the result of 12 steals and eight blocks, which is a lot. Now, all of that is part of OKC's game plan. They want to go to the line and they are great at getting there. But the 31 that they got in game 3 is well above their average. They've tallied 12+ steals and 8+ blocks only four times this season, including game 4. The other three were against the Lakers (twice) and the Sixers. This was OKC operating at near-peak efficiency. If they continue to do that, there's nothing the Spurs can do.

The Spurs best bet to survive the series is for some good old fashioned regression to the mean to occur. I'm not talking about OKC getting single digit free throw attempts or no steals. Those are things they're good at. But if they slip just a little, the Spurs will be in those games, like they were the first two.

Could starting Diaw or Manu help prevent OKC from going off? It's possible. Mills and Bonner should receive some consideration as well but it doesn't seem a likely move from Pop. Whoever starts, the challenge will be the same: avoid live ball turnovers and always get back on D. Force them to play half court offense because as much as the Spurs are struggling to score on Ibaka, the Thunder have problems of their own in that setting.

If that sounds familiar it's because every team facing OKC tries to do that, including the Spurs. They did it in the first two games and won. They couldn't in games 3 and 4 and lost. If they go back to the basics and OKC plays like a basketball team instead of a video game version with maxed out attributes, the Spurs can beat them without making magical adjustments.

If that doesn't happen, all the lineup changes in the world won't help them.