Spurs vs. Thunder: An appropriate amount of tension

Gregg Popovich's philosophy is to operate with an appropriate amount of fear. After Game 4 of the Western Conference Finals though the fear is gone. If the Spurs are to survive, it will be because tension has replaced all other emotions.

Share All sharing options for: Spurs vs. Thunder: An appropriate amount of tension

They are usually the guys the reporters overlook inside the locker room. While clamoring to get quotes from Tony Parker or Tim Duncan, role players like Cory Joseph and Aron Baynes are often innocuously ignored. They are the men that simply go about their business getting dressed and chatting amongst themselves while Spurs royalty is pursued.

They politely excuse themselves as they attempt to get to their lockers by squeezing past the throng of television crews and reporters that seemingly have no interest in speaking to them.

On Tuesday night in Oklahoma City though, those role players were thrust into the open in what appears to be an epic struggle of wills between Popovich and two of the most important people on his basketball team, and for that matter, in his life.

It was the scene in that 80's drama on VHS that's stuffed away in the back of the TV cabinet. The bickering parents pushing the kids out onto the baseball field so they could argue in silence. One parent, resolute in his decision to allow the kids to play, ignoring their fear and confusion. The other, passive-aggressively rising to greet the kids when they leave the field to pat them on the back and assuage their anxieties. The kids did their best, but they know something is wrong underneath the surface. 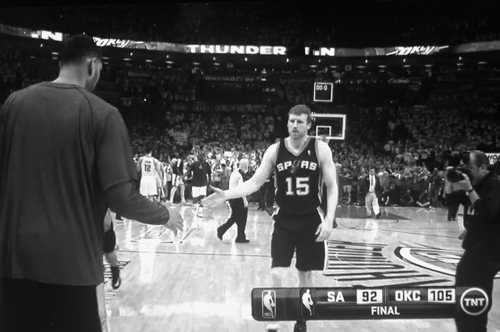 The role players performed admirably, closing a 27 point deficit to 11 midway through the 4th before running out of steam. By that point in the night however, Popovich wasn't concerned with winning Game 4. He was more interested in saving the legs of his veterans and sending a not-so-subtle message that their recent inability to play fundamental basketball is in no way acceptable.

And if doing so initiated a more than appropriate amount of tension between him and his starters, then all the better. Tony Parker tried, but couldn't mask his frustration after the game. "I trust Pop. That's his decision," he said. "I respect it," he added. "I felt great tonight, I just didn't play a lot. I only played like five minutes in the 2nd half." 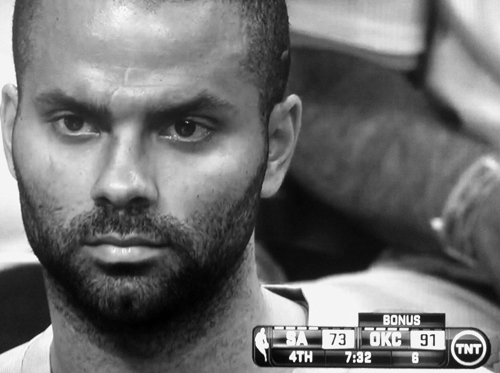 A few days ago, being at such a crossroads was impossible to imagine. Last Wednesday night after Game 2 it was Scott Brooks who looked worn down and beaten. It was Kevin Durant and Russell Westbrook who were arguing on the sidelines. Now, in the span of six days the roles are completely reversed. It is the Spurs who can't seem to find an answer and the Thunder that seem to be in complete control. It's Tim Duncan and Tony Parker that are struggling to understand the strategy of their head coach. And it's Durant and Westbrook who are all smiles from the podium. 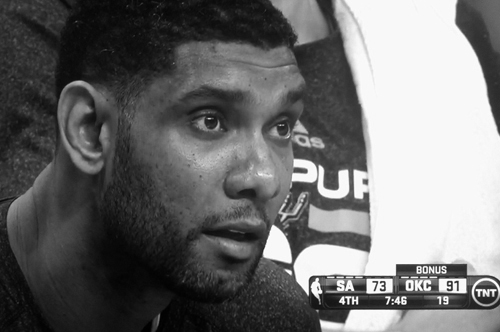 So the season now comes down to a best of three series. The national media will continue to fawn over the Ibaka, Serge and the singular greatness that is Russell Westbrook, teammate extraordinaire. The narrative will play out that Scott Brooks is the ultimate player's coach because he allows his superstars to play maximum minutes regardless of circumstance so they can "get theirs."

We'll hear unending mentions of 2012 and the four game roll that the Thunder went on after spotting the first two games to the Spurs. The hope for the Spurs is that they can continue to fight back the demons of recent play-offs past and control their emotions on Thursday night and beyond. Because in the end it doesn't really matter how Serge Ibaka is playing or how many points Kevin Durant scores. In the end the only thing that matters is how the Spurs execute on both ends of the court and if they can protect their home court advantage. In the end the only thing that matters is if Duncan, Parker and the rest of the players that performed so well for so long can find a way to play Spurs basketball well enough to gut out two more wins. 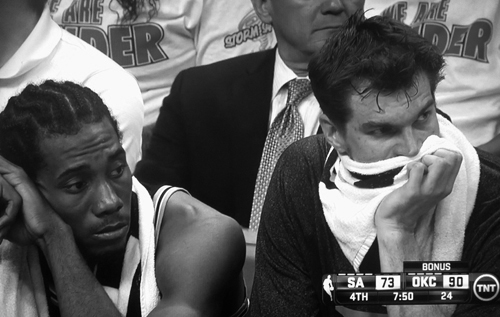 In poker terms, Gregg Popovich has gone all in. He was asked by an OKC reporter if he considered re-inserting his starters into the game after his role players cut the deficit to 11. After chastising the man for talking with food in his mouth, he said curtly, "No because I didn't see any sense in it." When asked why he went to his bench so early, he said only "Thursday."

He understands that this will likely be a seven game series, so he used the final 18 minutes of the game as one one more instructional opportunity for these guys that have already seen it all. While play continued on the court, Popovich could continually be seen on the sideline talking to and coaching up his veteran players. We'll find out Thursday if his words got through.

Popovich took a huge chance with his actions on Tuesday. Although the odds were heavy against it, he chose to forego any shot at a victory in Game 4 to send a message to Parker, Duncan and the rest of his core group that they needed to play smart basketball in order to beat the more athletic Thunder. Surely the late game lineups of Boris Diaw, Matt Bonner, Cory Joseph, Marco Belinelli, Patty Mills, Aron Baynes and Jeff Ayres that furiously cut the Thunder lead by 16 added gravitas to the "smart basketball" point he was trying to make. 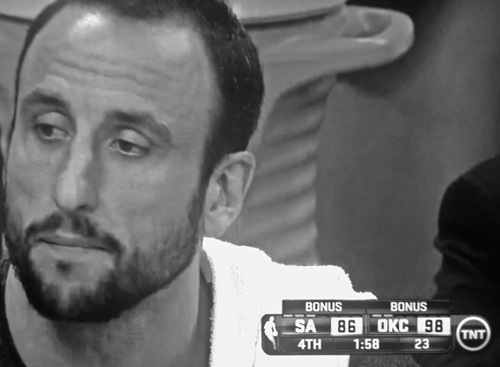 But his words spoken from the post-game podium will also reflect back on him in one way or another. "You gotta play smarter against such great athletes," he said. "Their athleticism and length gives you a small margin for error. You better be smart and you can't afford to screw things up."

He's right in so many ways. The margin for error is now three games, at most. Fortunately, the Spurs don't have to win in Oklahoma City this year in order to advance -- but their margin for error is small, and it's getting smaller. And with that, the general mindset has changed for Popovich and his Spurs. Because no one, from Popovich down, can afford to screw things up going forward.

That fact makes it an understatement to say that there's an appropriate amount of tension in the air these days.