The Spurs exploited Ibaka's absence and dominated inside

It turns out that Kevin Durant and Russell Westbrook aren't indefatigable aliens after all. Who knew?

Share All sharing options for: The Spurs exploited Ibaka's absence and dominated inside

I don't usually think of Thunder skipper Scott Brooks as a profound coach, but he nailed the thesis of Monday night's Game 1 better than anyone when he said of the Spurs, "They have five guys that can score on the floor at the same time. You don't have a possession off. Not one. We can't hide anybody."

I texted J.R. Wilco after the game with a genuine dilemma. How am I supposed to figure out the Three Stars after a performance like that, when just about everyone except the Coyote contributed so notably to the win? I can't recall another game quite like this (playoffs or the regular season) where every single guy in the rotation 1-10 played above average or better. Literally all of them had a couple of moments here or there, from Tim Duncan at the top right down to 10th-man Aron Baynes.

Contrast that to the superduperstar-laden Thunder, who leverage the breathtaking talents of Kevin Durant and Russell Westbrook but are weighed down by offensive albatrosses otherwise, especially in that starting lineup, where famous TNT seismologist Charles Barkley pointed out that Kendrick Perkins, Nick Collison and Thabo Sefolosha combined for five points on 10 shots. The thing is, without the services of the injured Serge Ibaka, Brooks has to lean on his starters more than ever. The bench has capable scorers in Reggie Jackson, Caron Butler and the ageless Derek Fisher, but man do they give it back on the other end.

Collison in particular was the "LVP" of the game. He's long been a darling of the analytical community, but he got exposed for the bench scrub that he is. Almost on cue he found himself wide open early on in the game for two shots that his predecessor, Ibaka, would nail in his sleep, a baseline 15-footer and a corner three on the opposite side. He missed both badly. On the other end, he was getting absolutely exposed by the 38-year-old Duncan as too short, too small and too ground-bound to challenge in any capacity. The Spurs got out to an 18-7 lead before Brooks sat him, and Duncan continued to feast on smaller lineups the rest of the way, on his way to 21 first half points.

But story of the game was told when the Thunder went small. Collison and Perkins played for just 14:18 together, meaning that OKC played small or micro (we'll get to that) for the other 33:42. Take out the time Durant spent on the bench, and KD was asked to play as a power forward or center (!!!), for 26:29, over half the night.

Spurs coach Gregg Popovich hasn't gotten all of his accolades for nothing. He saw the break his team got in Ibaka's absence and played it for all it was worth -- not only ordering his charges to attack the paint relentlessly (the Spurs scored an overwhelming 66 points in the paint) but also with his lineup deployment.

Even though it didn't appear all that effective with the Spurs outscored by a point overall, Pop stayed big against the Thunder's small lineups with Durant at the four for 12:45, with Duncan or Boris Diaw leaning heavily on him in the post and wearing him down.

Through three quarters Pop waited and stayed patient, going small only briefly in the second quarter to match the Thunder when Durant rested. Finally, in the fourth quarter, he struck. The Spurs went small for small against the exhausted Durant (and, it must be said, a worn down Westbrook) and the good guys ran 'em out of the gym. The Spurs were +14 in 6:18 minutes playing small against Durant at the stretch four. That was pretty much the game.

The one interesting wrinkle Brooks tried, both in the second and fourth quarters, was using Durant as center, the way the Mavs did with Dirk Nowitzki in complete desperation in Game 7 of the first round. The results were so-so (+1 for the Spurs in 7:06, with Tiago Splitter +4 in 2:39, and Diaw -3 in 4:27), but at least the lineup had the effect of pulling Duncan off the floor for a big chunk of the fourth quarter. I wonder if Brooks will go to it more in the coming games because Perkins is the only reliable defender he can throw on Duncan, who's too big and athletic for Collison and far too savvy for Adams.

One other thing I noticed was that as much as the Durant vs. Kawhi Leonard match-up was emphasized and played-up, Pop's strategy for three quarters was to play like his perimeter defenders were all interchangeable and of similar quality. Borrowing from Rick Carlisle's playbook, the Spurs switched EVERYTHING for the first three quarters, not caring at all if a Danny Green, a Manu Ginobili or even a Marco Belinelli found themselves on Durant as long as there was no open lane to the rim. In the fourth quarter, once Durant was worn down, that's when Pop fully unleashed Big Daddy upon him, with Leonard picking up Durant at the half court line and not giving an inch. The MVP's body language was noticeable. He wanted no part of Leonard. He just didn't have the energy to go at him.

In the third quarter Durant and Westbrook combined for 21 of the Thunder's 23 points, shooting 8-of-15, with three assists and two turnovers. (You'll notice though, even with that explosion by their two stars, OKC still scored just 23, hamstrung as they were by the rest of their offensively-challenged starters). But in the fourth they combined for just seven points on 2-of-6, with two assists and four turnovers. They were toast.

So what adjustments are left for Brooks to make? Well, defensively he's got to make sure that Perkins is the one guarding Duncan, not Collison. He can't let the Spurs switch out that match-up. When the Thunder go small he has to bite the bullet and pack the paint and live or die with the Spurs shooting threes. It's just too easy for them to score inside and go nuts with the pick-and-roll otherwise. If they bring in the third defender, at least they may force a few turnovers now and again and get some easy run outs.

Offensively the Thunder have to do a better job handling the Spurs when they're switching early, to get Durant isolated on Parker or Patty Mills rather than someone bigger. And he has to be more aggressive against anyone besides Leonard and punish the Spurs for switching. They'll probably try to use Durant at center more, just to get Duncan out of the game. (I wonder if Pop will ever try to keep Duncan in as the lone big, just to see what happens.)

The one card Brooks has left to play is youngster Perry Jones. He's got Ibaka-like size and similar athleticism. He's a much better shooter and has enough range to extend to the three. He's not at all an experienced defender, but just his raw attributes would probably let him make a couple of plays in his own end by accident. If the Thunder want to avoid the small-on-small match-up, particularly with the callow Adams as the lone big, then he needs to give Jones some minutes. And I have no idea why Brooks never played Collison and Adams together.

The Spurs, meanwhile, played so well for the lion's share of the game that there is hardly anything for Pop to harp about. They did allow Durant to leak out for a couple wide open threes, with Leonard the guilty party both times (seriously, never suck in when you've got KD out there, Kawhi) and got a bit leaky in transition against Westbrook in the third quarter and stagnant on offense, but otherwise there isn't much to complain about. The biggest task for them is to stay sharp and guard against complacency as well as they guarded against Russ and KD.

You can't stop them. You can only tire them out by making them work on both ends. Like Brooks said, against the Spurs you can't hide anybody.

Another hidden key for the Spurs: they kept their turnovers down, not allowing the Thunder to get easy fast-break points for Durant and Westbrook. The Spurs committed just ten turnovers, with OKC getting 13 points off of those, and allowed 11 fast break points overall.

The Spurs have now turned it over a dozen times or less in nine of their 13 playoff games (8-1), including the last seven in a row. In six of those nine it's been 10 or fewer turnovers and they're 6-0 in those games.

The Spurs were a middle-of-the-pack team in turnovers during the regular season, averaging 14.1 and forcing 13.3. In the playoffs though they've shrunk that number to 11.8 and forced 13.6, which is remarkable considering Game 2 against Dallas where they gave it up 24 times.

It's ridiculously hard to beat the Spurs when they're this careful with the ball and this diligent about getting back on defense.

Parker didn't look completely healthy and lacked his usual zip but he seemed to hold up fairly well after suffering a Grade 1 hamstring strain last week against Portland. Similar to most of the Dallas series he did almost all of his damage in the first half before slowing down, but this time against the Thunder he had a half-dozen assists in each half. Usually when Parker slows, everything about his game stops, but not Monday night, to his credit.

Durant had three free throw attempts in the first 2:28 and I was thinking, "Here we go again." He only had one other attempt the rest of the game.

I still don't think the refs gave Ginobili any calls on either end, which wasn't surprising.

The Thunder stayed in the game with a 29-11 edge in bench scoring in the first half, thanks mainly to Fisher's hot shooting. It was 32-18 in the second half in the Spurs' favor, however, led by Ginobili's 18, and 28-10 before the garbage time guys came in. Gino missed his first three shots of the game but converted 7-of-9 the rest of the way, including 3-of-3 from downtown. The rest helped his legs for sure.

66 points in the paint, including 29-of-33 in the restricted area. Yeah, maybe Ibaka's absence had a small impact on the game. (Ahem.) We should probably see how the series plays out to know for sure.

This was impossible. I've spent literally an hour trying to figure out the top three and couldn't do it. You can throw any combination of the top five and have a legit case. I finally copped out and decided to give Ginobili 1 point as the third star for playing just one half and the other four guys two points each so the final win-shares tally of nine points per game stays intact. 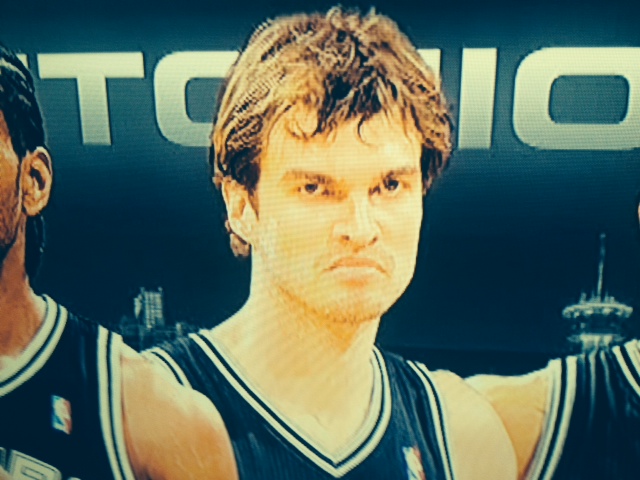