Manu's renaissance has the Spurs on the cusp

Pressed against the ropes after a debilitating Game 3 defeat, the Spurs have relied heavily on the regenerated excellence of their veteran guard, and will continue to do so in the hopes of closing out the series.

Share All sharing options for: Manu's renaissance has the Spurs on the cusp

Asking "what if...?" can be an exhaustive exercise, but it's one many were considering after Manu Ginobili's Game 3 fourth quarter heroics were swiftly erased by fellow graybeard, Vince Carter.

Stuck with a 2-1 series deficit, the Spurs have leaned on their elusive ballhandler and turned the tide. Following a time-warping, incredibly efficient regular season campaign in which he once again put his hand up for Sixth Man of the Year honors, Ginobili's play has been a huge factor in this back-and-forth series.

Perhaps what is most encouraging about the Argentinian's vintage performance has been just how Ginobili has reverted to a flavorsome offensive recipe -- attacking the basket at will, and feasting off of his frontcourt companions' facilitating roles. As a result, he has amassed 26 points in the paint in the first five games, and has upped his personal fouls drawn to 6.2 per 36 minutes (from 4.5 during the regular season). Granted, much of the friendly output in and around the restricted area can be attributed to the opponent -- Dallas' porous defense ranked 22nd in the league in 2013-14 -- yet it is the willingness and determination to exploit these cracks that has made it possible to reap these rewards.

In addition to being able to camouflage Tony Parker's relative lull, Ginobili being deployed as a primary floor general has opened a number of intricate offensive opportunities. This refined role is responsible for Ginobili's altered, DIY attack. 53.3% of Manu's made baskets have come unassisted, a mark that is roughly an eight percent spike on his regular season standing.

Here is an extract of Ginobili's work at the controls against Dallas, taken from the first quarter of Game 4: 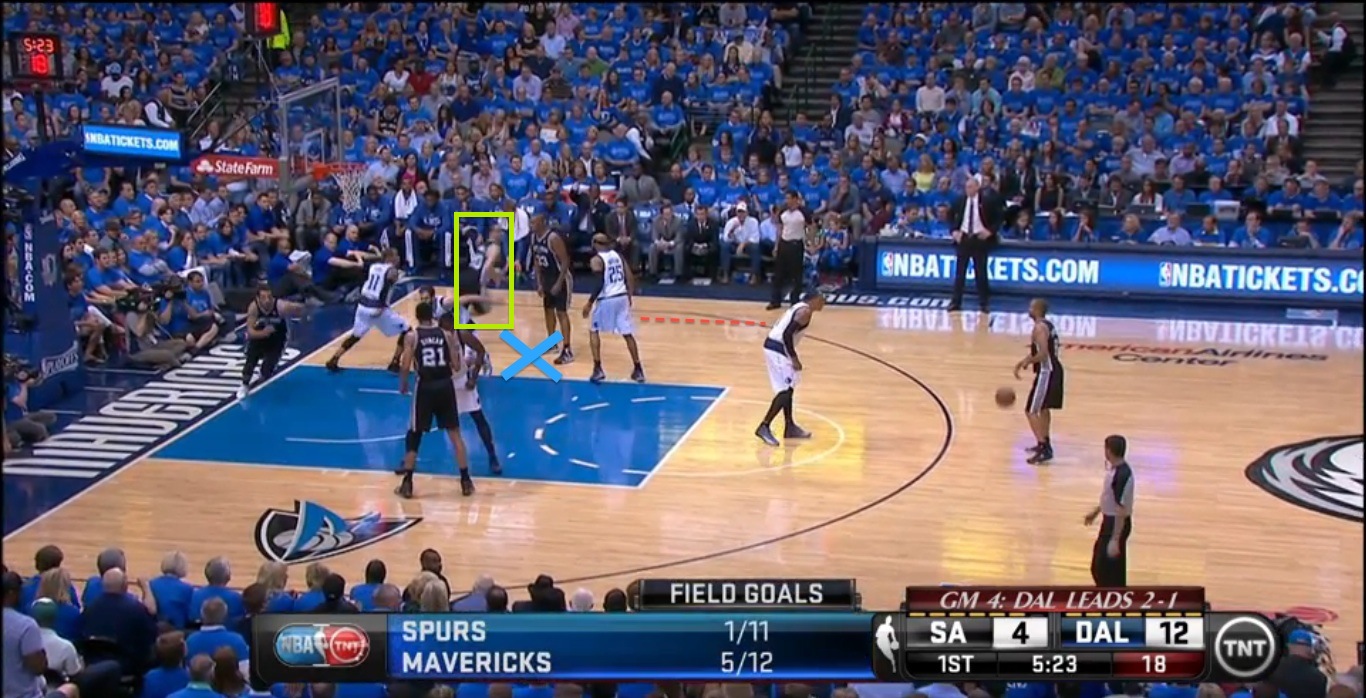 Ginobili used a pin-down from Diaw to curl out to the right wing, shortly before receiving the ball. Next, Diaw established post position and caught the entry pass, allowing for Manu to use a second screen out on the perimeter (set by Duncan). 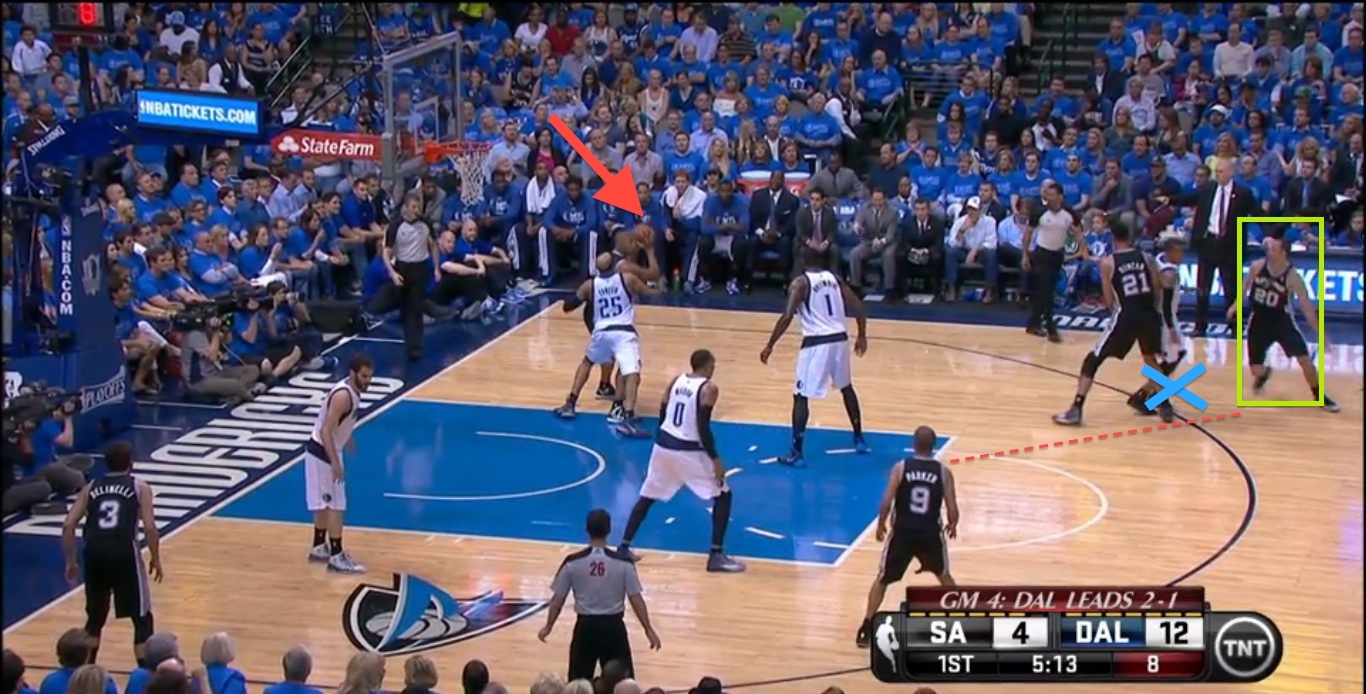 The Mavs' shaky, no-man's land defensive positioning set the table for a line-drive cut, and neatly complemented the end result. Notice the gaping hole in the paint shortly before Ginobili's off-the-bounce catch from the Diaw feed (no pun intended). 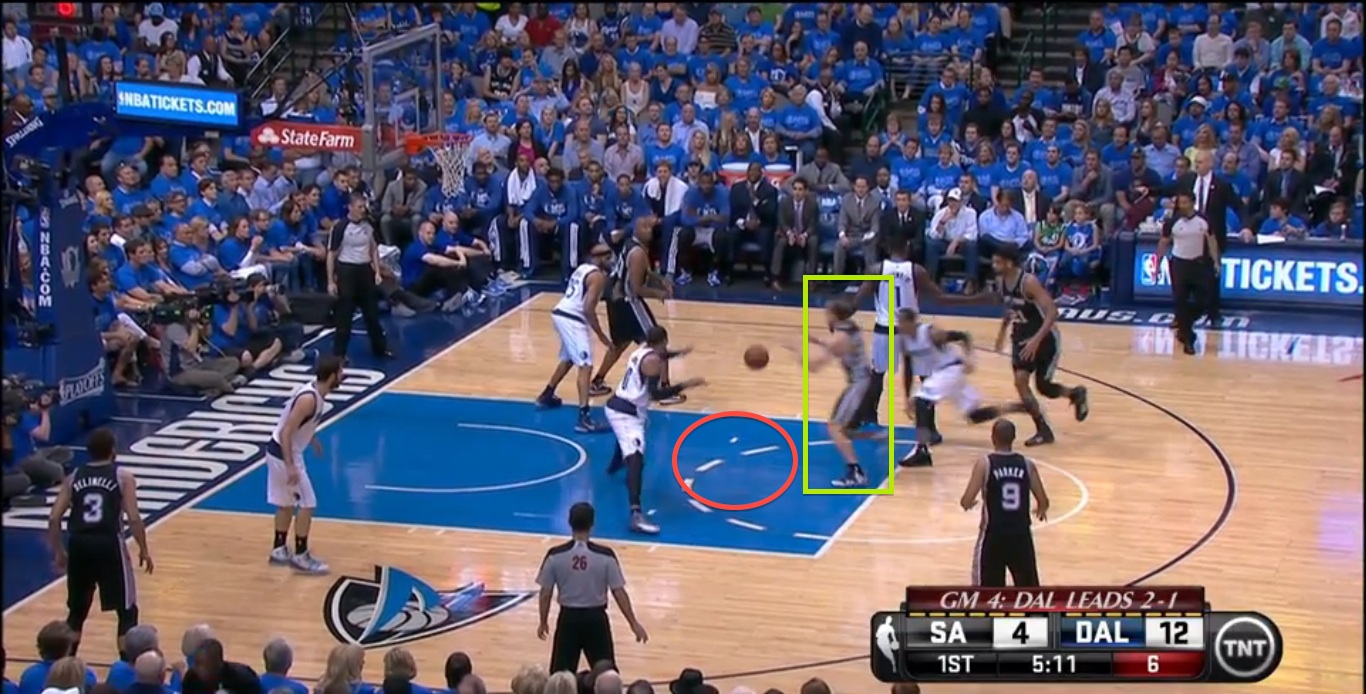 It is designs such as these, meticulously aimed at finding Ginobili in possession and headed toward the rim, that can be accredited for the renewed scoring spark. With this in mind, it should come as no surprise that his free throw rate has been catapulted from an unprecedentedly-low 30.0% throughout this past season to a whopping 52.3% in the playoffs, per Basketball-Reference. To compound that head-scratching number for Dallas, the Argentine has also eclipsed the 70.0% mark on field goals attempted within three feet of the basket.

Although a subdued showing by Tony Parker may be considered a moral victory for the Mavericks, a sustained dosage of crafty Ginobili plays virtually wipes that progress away altogether. While Manu has been known to put in a cameos as San Antonio's de facto point guard, the Spurs ability to depend on Ginobili as the primary playmaker has been invaluable. And it certainly doesn't hurt that he has laced 41.4% of his outside attempts, either.

It's telling, and indicative of this topsy-turvy matchup, that the Spurs have so regularly handed the keys of the offense to their wily, 36-year old sixth man. To cap his rejuvenated effort, the two-time All-Star has managed 8.2 points per 48 minutes on drives -- to the tune of 41 drives in five games -- placing him in the top ten of all postseason performers.

Very little has gone according to script in these playoffs, let alone in this series, and a scarce few could have forecast the extent of Ginobili's involvement in this opening round. Since the Spurs won't always have the luxury of plucking away at a bottom-ten defensive unit, it remains to be seen if this handy positional rejig is at all permanent, and if the team continues to flourish under the stewardship of Ginobili.

Statistics utilized are courtesy of NBA.com/stats unless otherwise noted.