Kawhi Leonard's game looks nothing like what we expect from traditional stars. But because he is so good at so many things, his value is much higher than the one traditionally assigned to a role player

Share All sharing options for: Kawhi Leonard: Star or a role player?

SBNation has these very entertaining "What happened last night" articles, offering thoughts on the previous day's playoff games. After game 2 of Blazers-Spurs, Tom Ziller said this about Kawhi Leonard:

What Leonard has become is, in a way, a new Shawn Marion: the rare three-and-D superstar. On those great Suns teams, Marion was the Swiss Army knife that allowed Phoenix to make interesting roster and rotation decisions. He filled the gaps. He was, basically, a superstar role player. That's where Kawhi is: he's not going to drop 30 or tally a triple-double, but he's going to lock down an opposing scorer, create some open-court opportunities and hit enough shots to make you feel it.

Now, It's not that Spurs fans haven't been aware of Leonard's ability to be supremely important despite not taking over on offense. But when looking at his development, lots of people were trying to spot improvement in the areas considered harbingers of future stardom and Kawhi didn't deliver as quickly as many hoped after a fantastic playoff run last season. What he did instead was get better at the things that made him an invaluable part of the Spurs' contending puzzle.

Right now, the player Ziller describes and we are seeing is exactly the one the Spurs' need and one that any team would absolutely love to have. Manu, Tony Parker and Tim Duncan get more touches because they are more polished offensive players than Kawhi but make no mistake: this team wouldn't be going anywhere without Kawhi Leonard. Like Marion, he is not a luxury despite their teams boasting more flashy stars. The Spurs needed someone who could do a little bit of everything but do it at a high enough level to make up for everyone else's deficiencies. Leonard has been so good on that role that he has single-handedly raised the Spurs ceiling.

Comparing him to other great low usage stars

But let's explore the concept of the superstar role player further. It needs to be someone who isn't a first or second offensive options and focuses instead of doing a little bit of everything. Ziller mentions peak Marion as the best example. I think Andre Iguodala is the best representative of this type of player today. I'm adding Chandler Parsons and Luol Deng as Kawhi's direct competition and Trevor Ariza as perhaps the league's preeminent 3-and-D guy. 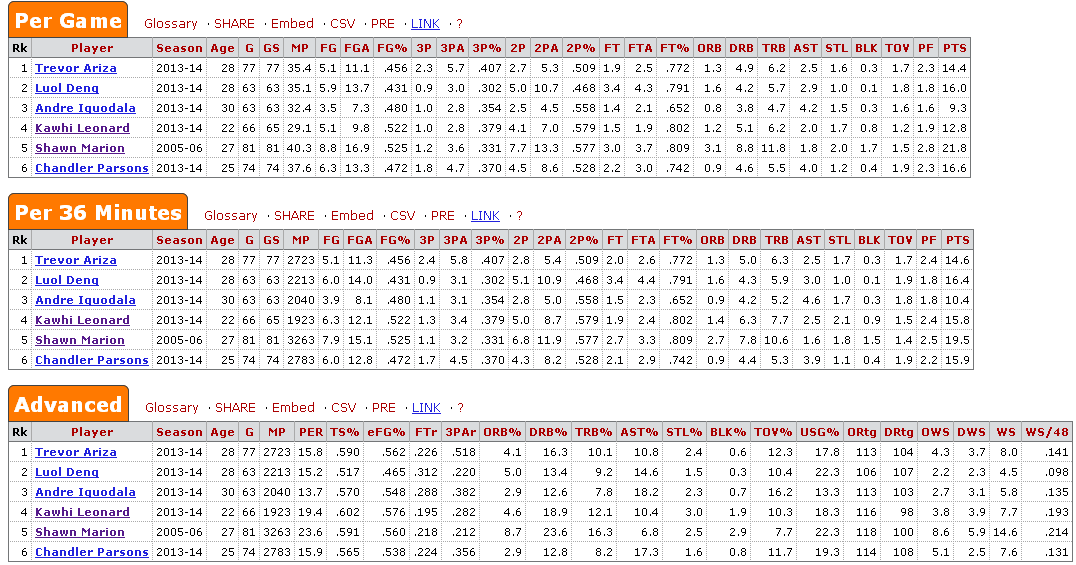 Since I'm using peak performance Marion, he towers over the other three in most statistical categories. While there clearly are some unifying characteristics between these guys, what's more interesting is how it's possible to be a star role playing wing in different ways. Iguodala makes up for his mediocre outside shooting with deft playmaking. Parsons and Deng have very few holes to their game. Ariza is a deadly volume three point shooter who can lock down on defense and contribute in other categories when called upon without excelling at any in particular.

Leonard, at only 22 years old (and ten months), compares favorably in a lot of categories and seems to be the more complete of the bunch. Kawhi is the only one to share Marion's ability to play the two through four spots. Ariza is a better shooter but he has no way of creating shots for himself while Leonard is already crafty in the post and has a deadly pull up mid-range jumper. Iguodala is not even comparable to Leonard as a shooter or a rebounder. Deng's lack of range hurts him in the comp. And Parsons is not as good a defender as the rest of the players on that list.

While he is not on peak Shawn Marion level's yet, Leonard is arguably already the best superstar role player in the league right now. Even with marginal improvement as he continues to grown and develop, he could be the third star every team wants on their roster to complement their transcendent talent. But is that enough for him or the Spurs?

As mentioned, Leonard is a perfect fit with the Spurs right now because he can focus on plugging holes instead of being "the guy." But once Duncan and Manu are gone, he will likely be asked to step up his game on offense in a more traditional star role and Leonard seems to be looking forward to that. Here's what he said when confronted with Pop's quote about becoming the face of the franchise: "I've been working hard to be one of the focal points in the NBA, one of the top guys. For him to say that and see that I could be the face, it just brings joy to me." And "Once the Big Three is gone, you'll probably see a lot more of me taking over."

It doesn't sound like Leonard will be happy staying in the role of utility guy his entire career. And the Spurs will obviously give him every opportunity to try to become a traditional star in the future. The problem is that transition has not been easy for similar players.

Shawn Marion was a terrific player when he was a distant third on the pecking order behind Nash and Stoudemire in Phoenix. But he could never transition into featured weapon when he left Arizona. Iguodala could never live up to expectations as a first option once Iverson was traded and has found comfort in reduced roles with Denver and Golden State. Deng's limitations were exposed without Derrick Rose. And Ariza was a disaster when Houston's G.M. Daryl Morey tried to turn him into a star by expanding his role.

The risk, then, lies in getting too greedy and trying to turn valuable role players into high usage stars even when they haven't showed the defining characteristics necessary for the job.

Can Kawhi be the exception?

Leonard is so young and has improved so steadily and quickly over his short career that establishing a ceiling for him is impossible yet. And he has showed flashes of a more traditionally dominant game that is dormant but flourishing beneath the surface. Game 2 against Portland, the game that drew Ziller's attention and prompted this post is a prime example of that. Kawhi was aggressive looking for his own shot to great results. And he already has developed a small but effective arsenal of moves that allow him to create for himself. He could easily add to that in the future.

The one area in which Leonard absolutely needs to get better if he wants to be more than a third star on a great team is his ability to create for others. Whether it's just a question of him not having opportunities to do so yet or a lack of natural ability is obviously still up for debate. The good news is he showed good decision making and decent court vision passing out of the post against the Mavericks. That's something to build on. And with two of the best pick-and-roll playmakers teaching him the ropes and his work ethic, Leonard could continue to improve in the one area that could lower his ceiling if left undeveloped.

Speculating about Kawhi Leonard's future seems to be every Spurs' fan favorite hobby. And with Kawhi teasing us with his potential by taking over playoff games, that probably won't change anytime soon.

One thing we know for sure: whether he develops into a traditional star in the future or not, Leonard's quiet brand of excellence is indispensable for the Spurs' chances to contend and arguably unparalleled in the league.