The Spurs are Pick and Rolling Dallas to death

San Antonio has found Dallas' weak spot and is relentlessly attacking it.

Share All sharing options for: The Spurs are Pick and Rolling Dallas to death

Just after Game 1, I wrote about how the Mavericks defense tricked the Spurs into running too many isolation plays. I argued that the isolation plays are what caused the Spurs offense to under-perform. Rick Carlisle understood that if he didn't change the way the Spurs played, San Antonio would continue their regular season success. So he had his team switch everything, resulting in huge mismatches that the Spurs were unable to pass up. The ball stopped moving and the once fluid Spurs offense became sluggish and open shots were few and far between. 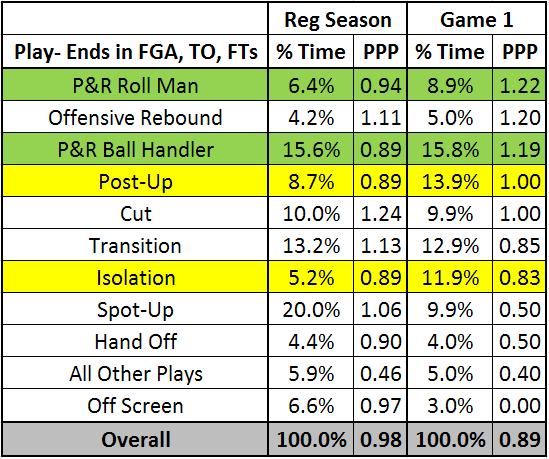 I wrote about the two rows in highlighted in yellow, post-ups and isolations. As you can see, in Game 1 the Spurs ran far more of them than they did in the regular season. Although the points per possession that they produced were not terrible, the negative effect they had on the Spurs overall offense was too costly, in my opinion.

I sorted the data above by the points per possession that the plays produced in Game 1. I now feel a little silly for not paying attention to what went right in Game 1. I suppose I am too much of a pessimist. I focused on what went wrong instead of what went well. I should have solved the problem rather than identifying it.

The switch meant that a Dallas big was defending a small and the Dallas small was defending a big. If the Ball Handler could get the ball to the Roll Man, the Spurs had a huge advantage as the bigger player would be rolling towards the basket with a smaller player attempting to defend him. When the Spurs executed the pick and roll to take advantage of the mismatch, rather than stop the action to run an isolation play, the ball kept moving and the Spurs offense produced.

Even when the Mavericks did not immediately switch the pick and roll, they were at a disadvantage. Dalembert and Dirk are just not physically equipped to defend it. They lack the lateral quickness needed to deter the guard's penetration while also dissuading the pass to the roll man. 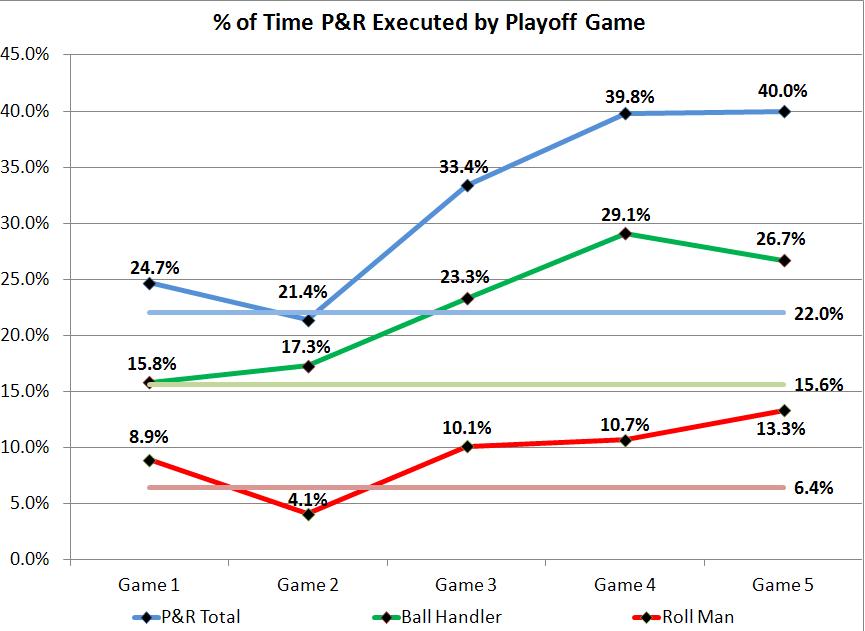 More importantly, the Spurs are finding the Roll Man with greater frequency. The Spurs are getting used to the Mavericks defense and are now exploiting it at its weakest point. In each game since the disaster that was Game 2, the Spurs have found the Roll Man more often. 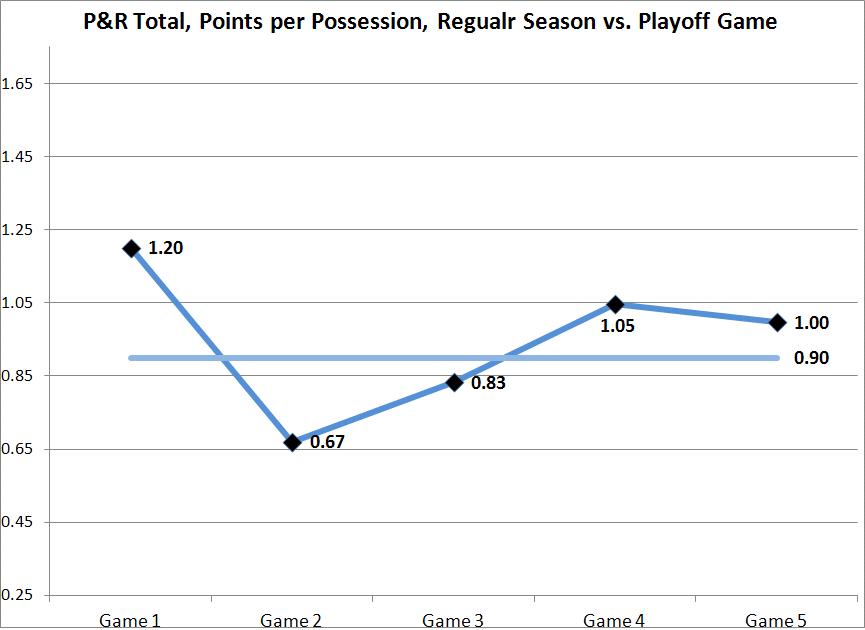 Increasing the usage of the pick and roll has paid off for the Spurs. Not coincidentally, the two games in which the Spurs produced the least PPP through the pick and roll, they lost. In Games 2 and 3, they scored less than their regular season average of .90 and were defeated. In the three games they've won, the pick and roll led the way.

Keep in mind that some of these pick and rolls result in Spot-Up opportunities, which are also a very efficient play for the Spurs. Basically, by using the pick and roll rather than isolations or post ups to exploit the mismatches that Dallas is giving them, the Spurs have ensured that the ball continues to move. Off-ball players do not stop to watch the play, and the Spurs offense has managed to reestablish itself as the series has progressed through the pick and rolls.

Interestingly, what's made the pick and roll so successful is the roll man. Again, since Dallas is switching, the roll man has a huge advantage when he receives the ball, because his momentum is carrying him to the basket and he has a smaller defender on him. Even with perfect help defense, Dallas is at a disadvantage and the numbers reflect that. Aside from Game 2 when the Spurs turned the ball over 24 times, the Spurs have consistently beaten their regular season average of .94 points per possession, which was already elite.

In the Game 5 post-game press conference, Rick Carlisle said, "Our defense has got to be better. They had eight threes, [shooting] 50% on threes. They got a big paint number. Really, they just kind of had it going all night."

Up next, an exasperated Dirk noted, "Obviously, they are a little smarter about [their pick and rolls] now. We've been doing it for five games. That roll is just tough, you know? We can't give Duncan and Splitter those easy, uncontested layups. That's how they affect the game."

And so, with elimination looming, Rick is in a very difficult spot. The Spurs have figured out how to exploit the Dallas defense and are relentless in their attack. It seems that the Mavericks' only hope is that their offense out-duels the Spurs. Unfortunately for Dallas, San Antonio's defense has been one of the best in the league all year long.