Well, that escalated quickly. First, things in Mexico heated up and then the offense went cold in Minnesota. Plus, Ricky Rubio has a jump shot. Who knew?

Share All sharing options for: Spurs Infographic: Spurs vs Timberwolves 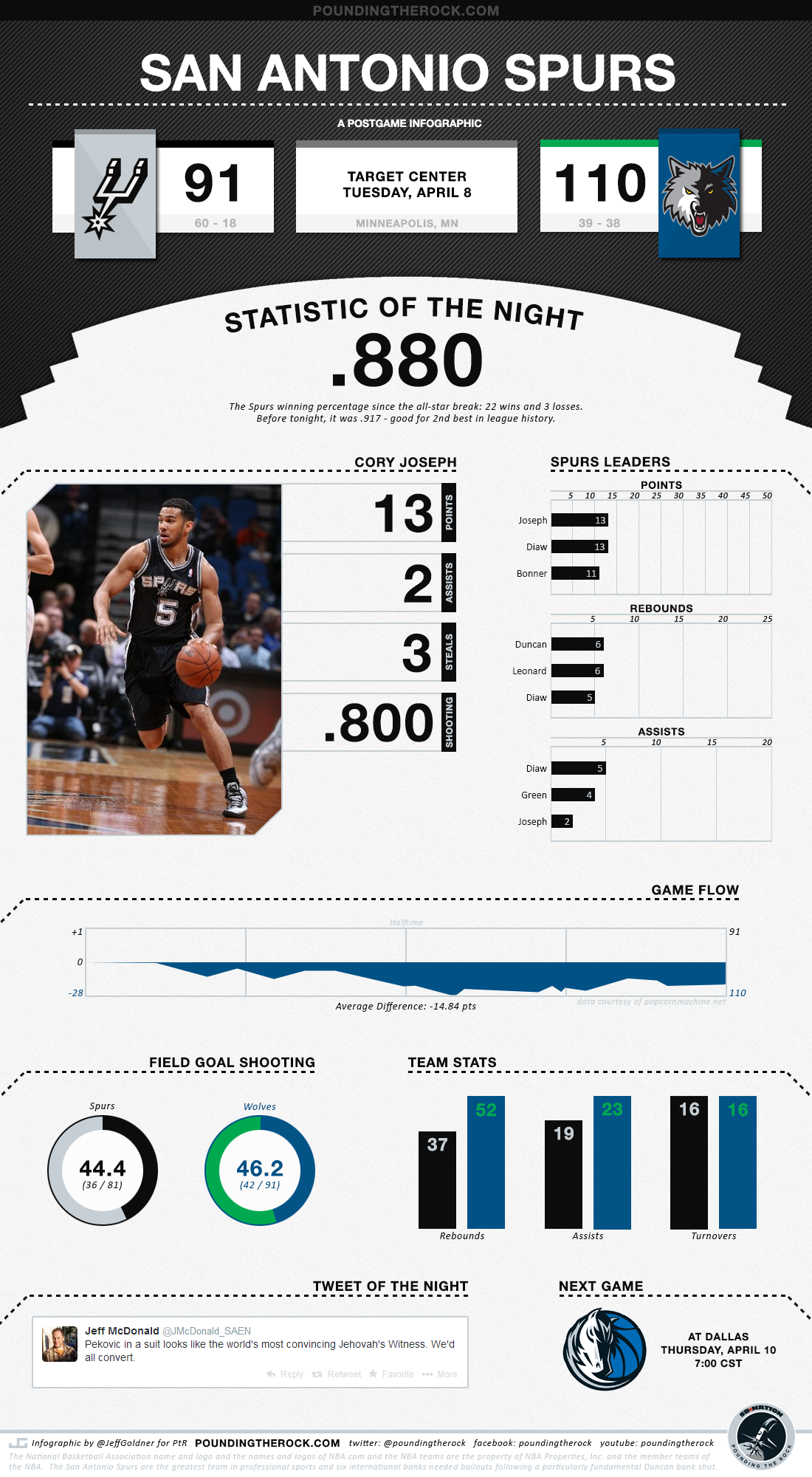 Standings – We have not clinched the Conference yet, but neither has that team from Florida. Oklahoma is 3.5 games back, after beating Sac-Town. They also play tomorrow against the Clippers.

Analyzing the loss, Paul Garcia of Project Spurs, noted that the Spurs could not find a rhythm in the first half. 34 points in that first half was a season low.

48MOH Grade Book – Coach Popovich with an A+. How you ask? "Managed to rest guys while still getting Leonard some extra burn. He took advantage of the butt-whoopin’, raised an early white flag and got some time for those bench guys."

Gregg Popovich - ''They beat us in every facet of the game,'' Popovich said. ''They basically forced us to lay an egg. We were awful and a lot of it was because of their aggressiveness.''

Rick Adelman - ''Tonight what I like about him is he came off and looked for the 15-foot jumper,'' Wolves coach Rick Adelman said of Rubio. ''He was under control, he was able to get his feet under him and shot it well.''

Typo or intentional? "The Wolves out-rebounded the Spurts by 15 tonight." Only Kent Youngblood of the Star Tribune knows for sure.

As you can tell, it was all business in Minnesota. All kinds of things going on in this photograph, courtesy of Boris’ Instagram account. However, where are Leonard and Green?

To rest or not to rest, that is the question. Things to consider: Fresh Legs – Element of Surprise (against future playoff opposition) – Confidence Builder (Bench).

Still feeling bad about the Thunder sweeping the Spurs? Durant’s streak is over. The Heat just got swept by the Nets. Plus, LeBron got blocked on a dunk to finish the game.