Playoff Countdown: How to fix the NBA playoffs?

The idea of a 16 team playoff tournament is enticing for NBA fans around the nation, but it is even more exciting to see how much it benefits the best teams (e.g. the Western Conference).

Share All sharing options for: Playoff Countdown: How to fix the NBA playoffs?

There are 11 days until the playoffs, and today's topic is the idea of shifting the current playoff format to a 16-seed look that gets rid of conferences.

It seems that the popular trend is to trash the current system that puts the teams in two conferences. The idea being thrown around is to merge the two conferences for a showdown of the best 16 teams. They would rank the teams based on records, and it has no limits as to how many teams one conference can enter.

And it makes a lot of sense. Why should the Grizzlies miss the playoffs when they have 11 more wins than the Atlanta Hawks? It eliminates the issue of unbalanced conferences since there's no guarantee that there are eight good teams in a single semi-geographical area. It provides more entertaining first few rounds, and it has the element of upset a lot earlier. The Heat wouldn't be able to jog into the playoffs while the Spurs sprint into it. More importantly, Miami wouldn't be able to waltz through their first series or two while San Antonio faces actual competition.

For any NBA fan, this would be incredible. The Heat would have to go through both the Chicago Bulls and the Indiana Pacers for the right to enter the NBA Finals. This format wouldn't just transform the dynamic of the playoffs, but it would change the influence of the regular season.

Whether you are a fan of this format or not, if it was put in place, the race for the best record would be incredible. It puts pressure on every team to win as many games as possible. And just look at the matchups that would take place. There's potential for upsets across the board. The Los Angeles Clippers could take on the Houston Rockets in the second round. The Miami Heat could play the Indiana Pacers before the Semi-Finals. The Spurs and Heat would face off before the NBA Finals. 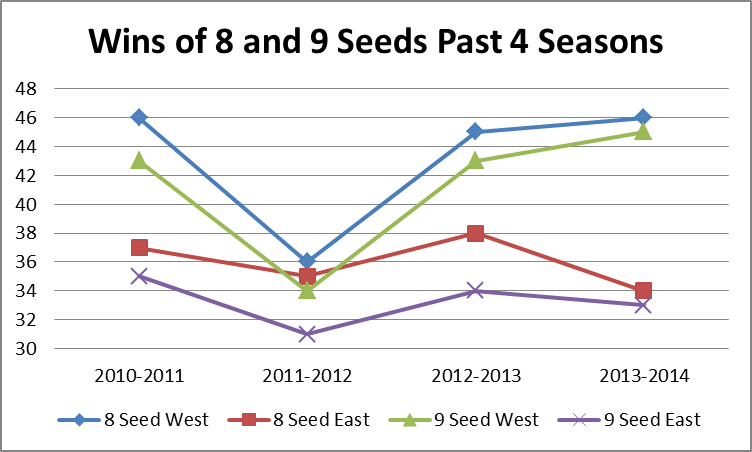 It is a complete joke that only once in the past four seasons the eight seed in the Eastern Conference has had more wins than the ninth place team in the Western Conference. Those teams have been absolutely robbed of a shot of competing in the postseason.

Another positive for this idea is the boost in interest that it could give the NBA. One of the only reasons that Men's Basketball at the college level is so popular is because of their tournament that takes place at the end of the year. They get huge numbers in the postseason because it has become a trademark for the month of March. If this is put in place, it becomes the perfect successor to an insane month of basketball. Basketball would own two and a half months out of the year.

The idea I am not on board with is Bill Simmons' proposed "Entertaining as Hell Tournament."

Simmons explained back in a 2012 column,

"...we launch my Entertaining as Hell Tournament - the top seven seeds in each conference make the playoffs, then the other 16 teams play a single-elimination tournament to "win" the no. 8 seeds. This would discourage tanking for lottery picks, reward late-bloomer teams and generate extra interest because, again, this tournament would be entertaining as hell. All 14 games would be televised - eight in Round 1, four in Round 2, then a doubleheader final at Madison Square Garden to decide the no. 8 seeds - over a week as the other 14 playoff teams regrouped and rested up."

Simmons added to the proposed tournament back on April 4th saying he would like to see this tag along with the 16 team ultimate tournament.

The reason I don't like it is because there would be the possibility of the worst team in the league undoing in a single game, what a team had earned through an entire season. We see crazy upsets in one-and-done tournaments all the time. There is a reason that the Milwaukee Bucks managed to win 14 games this season, and that is because anyone can beat anyone one time.

It doesn't seem likely that Adam Silver will change to format anytime soon, but until he does, NBA fans everywhere can dream that this becomes a reality.