For perhaps the first time since 2007, the Spurs have the one thing they fear right in between the crosshairs.

"Never turn your back on fear. It should always be in front of you, like a thing that might have to be killed."

You always fear something. You fear death, debt, the unknown. You fear exposure, speaking to a crowd, danger. It's an unavoidable aspect of human nature that fear is something to manage, not eradicate.

The San Antonio Spurs fear, above anything else, irrelevancy. Every move the franchise makes happens under the pressure of working to stave off time's hand and an early playoff elimination. "Championship or Bust" is practically etched into every silver and black jersey, a constant reminder that the bar for success has been set, and former glories will not provide current victories. This fear has driven increasingly aggressive roster moves. It's been behind the minutes allocation for the team and its aging stars. And it's at the heart of the team's identity shift over the past fifteen seasons.

Perhaps more than any other matchup, the Grizzlies provide the perfect example of how San Antonio manages the fear. The 2011 Spurs won 61 games and were arguably the best offensive team in the NBA. Their defense was squared firmly in the middle of the pack, but few people entertained the idea that the team at the top of the Western Conference might not make it out of the first round, even against a pesky defensive team like the Memphis Grizzlies. But after the first game, it was apparent that the Spurs would have great trouble scoring on such a physically aggressive defensive squad. To make matters worse, the Grizzlies seemed to get whatever they wanted on offense, as a helpless Spurs team could only stand by and rely on the defensive awareness of a well paid Richard Jefferson, a NAARP-certified Antonio McDyess, and an in-over-his-head Matt Bonner.

It was brutal, but in retrospect, it could have been expected. For the Spurs, a team that prides itself in being several steps ahead, it had to have been particularly painful to have missed something so obvious in the construction of its roster.

The Spurs left that season regrouping, and in a way, the Grizzlies loss gave them a gift. It pushed them to reconsider their approach, and from that season on, the team shifted its focus to re-energizing its hapless defense. No longer content to let teams push their way inside, the Spurs brought in Tiago Splitter to a bigger role after McDyess' retirement. They gave Danny Green another shot. They somehow got another team to bite on Richard Jefferson. And they gambled by trading a known in George Hill for the rights to a promising unknown in Kawhi Leonard.

From a roster perspective, there is little that the 2014 Spurs have in common with the 2011 incarnation. Where once a team like the Grizzlies would have bullied the Spurs, it's San Antonio that now dictates the matchups. They've evolved to compensate for glaring weaknesses, and even now, the team seems to be a step ahead of us. (Or in ESPN's case, several seasons ahead.) 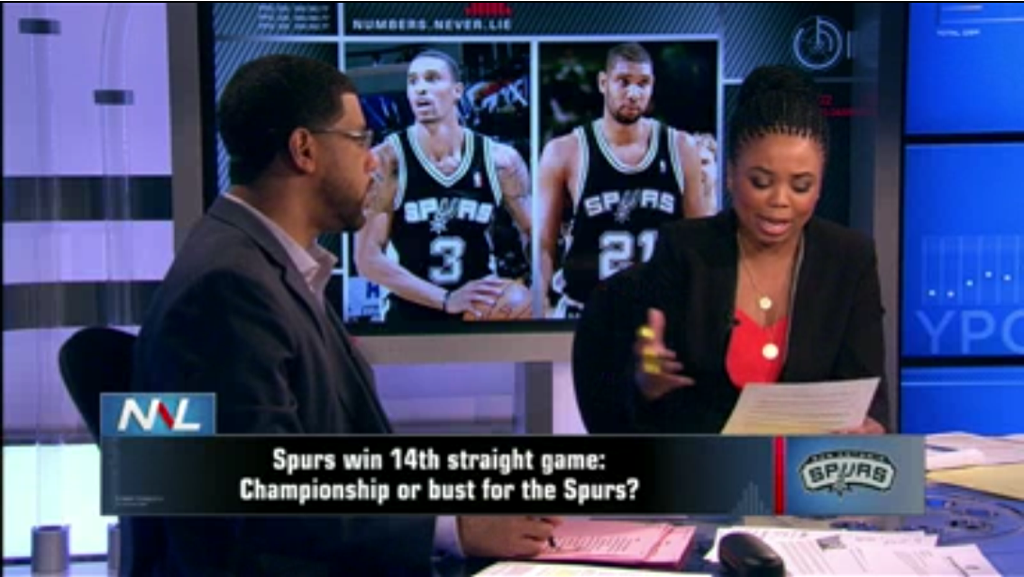 Yes, it's been championship-or-bust pretty much since 2003, ESPN. But thanks for trying.

As Jeff McDonald pointed out, since the 2011 series, Zach Randolph has averaged 34% field goal shooting against the Spurs. Sunday night was just another episode in this series, as Randolph scored just eight points on nine shots. San Antonio, to put it simply, seems to have figured out this matchup.

But there are other fears on the horizon.

As the playoffs approach, the Spurs know where they stand against positional and team mismatches. Jump-shooting bigs and athletic combo stars are still going to be frustrating, but the Spurs have learned from their mistakes. For all their robotism, the Spurs are still human, but they no longer find themselves afraid of the unknown. Instead, the fear of irrelevancy has become a motivator. This is partially why I predicted the Spurs would win the West:

A decade and a half of consistency, of military precision paired with constant ingenuity. Why would this season be any different? Why would we expect the Spurs to change their identity now? Game 6 should anger them. It should absolutely haunt them. But it can also push them. It can unite them. And just like pain inspired the 2005 and 2007 teams, I suspect it will again this year.

For perhaps the first time since 2007, the Spurs have the one thing they fear right in between the crosshairs.

Be sure to read to read Fred Silva's game recap if you haven't already.

QUOTE OF THE NIGHT

"I just made shots tonight."

It's difficult not to give this highlight to Kawhi Leonard, who was seriously excited about matching his career high. (See tweet below.) But to be fair, Manu Ginobili matched Kawhi Leonard's points in fewer minutes and on fewer shots, and Ginobili also did a better job of filling up the box score, as Leonard was curiously absent from the blocks and steals categories. Still, choosing between the two performances is a bit like choosing between your kids. Okay, it's not like that all, but you get the point. Both players had exceptional nights, but I think in the end you have to give the edge to Manu Ginobili. I suppose there are worse problems to have than deciding which of your team's players had the better 26-point performance.

Courtney Lee has had a bit of a career resurgence since his trade to Memphis, but you wouldn't know it watching him play on Sunday night. Lee was pretty absent on both ends of the court, and he didn't do much to help a Grizzlies team that seemed desperate for playmaking beyond what Mike Conley Jr. could provide. Lee was staggeringly inefficient and ghosted through most of the game. His line is basically the exact opposite of Manu Ginobili's line above in just about every measurable way. Obviously, Lee's play will need to improve for the Grizzlies to maintain any realistic playoff aspirations.

BIRD IS THE WORD

Between Ginobili, Calathes and Koufos, we have the NBA's perfect storm of bald spots.

Great hustle by the Spurs’ mascot. A for effort. http://t.co/muIXigbNbj http://t.co/N29IdQBuAd

The Spurs are Hannibal, and the Grizzlies are being turned into a lovely Blanquette de Veau.

Is that good? I feel like it's pretty good. RT @JMcDonald_SAEN That 3 gives Kawhi 26 points, matching career high. 12 of 13 from the field.

Kawhi Leonard is SUPER excited about his career high. pic.twitter.com/3ooWbCDFp7

It's really too bad that Austin isn't a dirty defender, because "Daye, tripper" is just sitting there.

THE GAME IN SONG

– taken from "There Goes the Fear" by Doves

The Spurs need to let Tony Parker rest as long as he needs to. They only need two wins to wrap up the West's top seed, and they still have a game against the Lakers left on their schedule. Tuesday's game against the Minnesota Timberwolves is a make-up game after the NBA was forced to cancel an earlier match in Mexico City after a fire broke out in the arena. This time around, the Spurs probably shouldn't pack any Cornballers.