The San Antonio Spurs continued their dominance over the Memphis Grizzlies. The Spurs held Memphis to just 10 first quarter points and the game was over by halftime.

Sunday night, the San Antonio Spurs hosted the Memphis Grizzlies in a game that could be a first round playoff preview. It seems that the Spurs will finish the season with the one seed and the Grizzlies will finish eighth, which means the two are once again destined to meet in the playoffs (editor's note: Phoenix's Sunday night win puts Memphis in ninth place for now). Last year, the Spurs swept the Grizzlies in the Western Conference Finals. If the two meet in the first round, I think most will predict another sweep.

In Sunday's game, the Spurs imposed their will on the Grizzlies. San Antonio owns this matchup and it was evident from the very start. The Spurs jumped on the Grizzlies early and Memphis spent the rest of the night struggling to stay in the game. Tony Parker got the Spurs off to a great start scoring 10 points in the opening quarter on perfect shooting, 4-4 FG and 2-2 FT. Unfortunately, Parker suffered from back spasms and did not return to the game after his explosive nine minutes of action.

In the first quarter, the Spurs shot 56% from the field to score 26 points. It was a decent offensive performance, but their five turnovers kept them from putting up more points. Defensively, the Spurs dominated the Grizzlies. The Spurs solved the Grizzlies' riddle and have the personnel to execute the winning strategy. San Antonio simply packs the paint and forces Memphis to take contested two and three pointers. Memphis isn't a great shooting team and can't punish the Spurs. The game was over before it began. Until Memphis finds some shooters, this is not going to be a matchup that they can win. The Spurs held Memphis to just 10 first quarter points and took a 16 point lead into the second quarter.

In the second, Memphis did manage to cut the Spurs' lead to eight, but Manu Ginobili responded with a three-pointer and the Spurs closed the half on a 12-2 run that essentially ended the game. As you can see from the game flow below, the Grizzlies really never threatened in the second half. 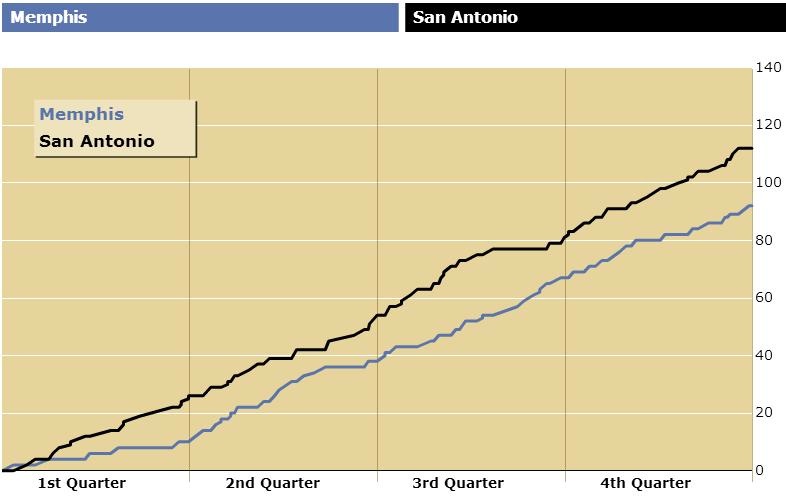 With this victory the Spurs swept their season series against Memphis, 4-0. Even though the Spurs played most of the game without their All Star point guard, San Antonio dominated Memphis in every aspect of the game. If you're a Memphis fan, I don't know what to tell you. It's not looking good for you; that's for sure.

For the game, the Spurs shot 56% from the field, 41% from downtown and 94% from the charity stripe. They recorded 27 assists on their 43 field goals. Defensively, the Spurs completely took Memphis out of their game. The 'grit and grind' style of Memphis only works if they can slow their opponent down. Without the grind, the game is a rout, and that's what happened Sunday night.

In the first half, where this one was decided, the Spurs shut down Memphis holding them to 37% shooting from the field and just 1 of 5 shooting from distance. The Spurs packed the paint. To keep the Spurs honest, Memphis had to hit 3-pointers and they simply do not have the personnel to make that happen. In the preseason, I remember getting into arguments with Memphis fans about how they were going to fare this season. They were pretty confident that Mike Miller was going to change everything. Well, Mike Miller sucks. The defense rests.

For the Spurs, two players put on a show. Kawhi Leonard and Manu Ginobli each scored 26 points to fill in for the injured Tony Parker. It's great to see Manu playing himself into form. He is playing with a rhythm and confidence that he was never able to attain last year due to all his injuries. In 26 minutes he scored 26 efficient points on just 11 shots, grabbed four rebounds and dished three assists.

Kawhi Leonard is finally taking the leap that we expected him to take at the beginning of the season. He scored 26 smooth points making 12 of his 13 shots from the field. He showcased a complete game tonight. Kawhi hit three pointers, looked great from midrange and attacked off the dribble with ease. In transition, he's a blur. Defensively, he's one of the best in the game.

You get the feeling that if he took 20 shots a night, he'd make 15 of them, but that's not who he is right now. He plays within the game and still looks to the Spurs' veterans for leadership. That's fine because the Spurs' veterans are still capable of leading this team to a championship. However, do not be surprised if Kawhi continues to take on a bigger role as the regular season comes to an end. He seems to be ramping up for the playoffs.