A recipe for Spurs success against the Thunder

There wasn't much we haven't already seen in Spurs loss to the Thunder. And that's ok. Thursday night's game contains just enough clues to the way San Antonio can take down OKC.

Share All sharing options for: A recipe for Spurs success against the Thunder

The Spurs lost to the Thunder for the fourth time this season, snapping a 19-game winning streak. Over the last two years, San Antonio has struggled to beat OKC and it seems the road back to the finals will lead to a series with the Thunder. A win on Thursday night would have pretty much secured home court advantage.

Truth is: it was a tough loss. It's not crazy to be angry, disappointed or panicky right now. I was a combination of all three as the game was being played. But after it ended I found a little perspective and I feel calm. Because the game didn't really tell us anything we didn't already know and I still believe the Spurs can beat the Thunder in a seven game series.

Enough has been said about the refs so I won't rehash it. But it's true that the Thunder get away with a lot of contact under the rim. When you combine that with the length of their rim protectors and the perimeter defenders that lurk to catch any big who lowers the ball, you get a situation in which inside scoring is hard to come by.

Diaw pump fakes and drives, drawing in Splitter's man. Tiago makes himself available and receives the pass close to the rim. But he has two elite rim protectors, Ibaka and Perkins, on him. 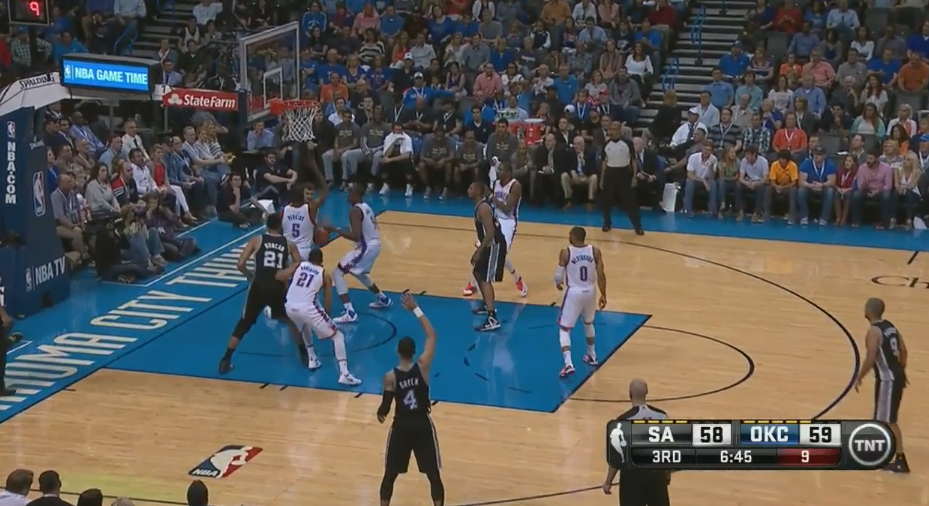 Normally, as Duncan's man abandons him to help, Splitter would make a wrap around pass for an easy two by Timmy. But Roberson has already rotated, leaving Green open. Splitter tries to get a shot up but he can't. The ball is loose and Splitter grabs it again but Roberson and Ibaka get a hand in there. Jump ball.

In this second play, Parker draws the defense in on a pick-and-roll with Splitter and passes to Tiago. But Splitter has Ibaka, Perkins and Durant guarding him. That's too much length. 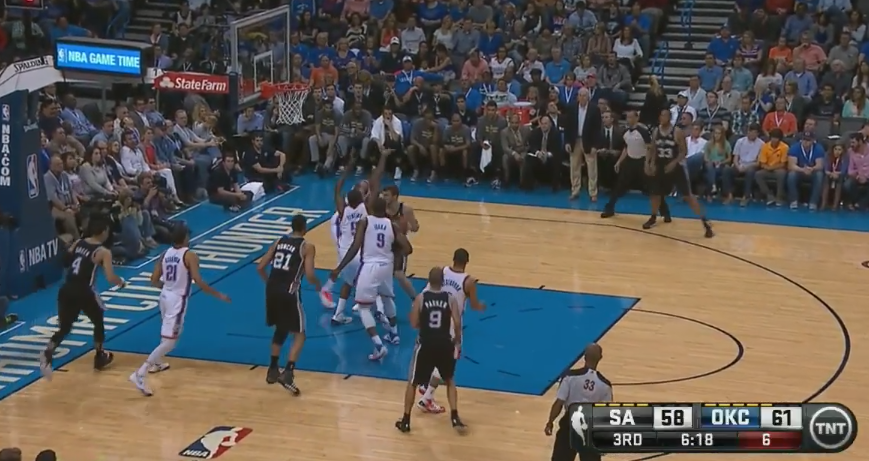 Splitter once again tries to get a shot up but gets blocked, recovers the ball and passes it outside to Parker.

Those are two great examples of how the Thunder protect the paint. They bring a lot of bodies in and force a tough shot. They do a fantastic job of protecting the rim and while Ibaka is a big part of that, he is not the only factor.

How the Spurs can counter it

There are two ways to counter it. The first involves the big slowing the roll and catching around the free throw line. If he does that, he will be able to see the floor and spot open shooters. But for that to work, the set needs to start early in the shot clock to allow the dive man to make a pass or a hand off for a second play. And the Thunder do a great job of disrupting the ball-handler and taking away precious seconds off the shot clock by fighting through screens and reaching in.

The other option is to use the inside scorer as a decoy and hit the shooters when OKC packs the paint. If the shooters start making the defense pay by either hitting those semi-contested looks from three or scoring off the dribble after the close out, the Thunder will have to adjust.

It's all interconnected. It starts with the ball-handler being able to create some separation after a screen, then the dive man drawing the defense in, and the shooters hitting shots to prevent their defenders from cheating off them.

It's every bit as difficult for the Thunder to score in the half court against San Antonio as it is for the Spurs to score against OKC. Having Durant helps, but Leonard guards him well. Westbrook is as talented as he is erratic. Still, their one-two punch is as good as any, and they put up a lot of points, but they can't make up for the limitations of their teammates.

San Antonio has a similar problem. To make up for the lack of shot creators in the starting lineup, they rely on the flawless execution of an intricate offensive playbook. OKC simply creates fast break buckets by using their athleticism to disrupt exactly the type of pass-heavy offense the Spurs like to run.

The Thunder are top ten in the league for fast break points and points off turnovers, and they're very good at limiting opponent fast break points. Their edge in transition points usually allows them to make up for their occasional struggles in the half court. In Thursday's game, they got 30 fast break points to the Spurs' 13.

Those easy transition buckets, plus their ability to get to the line, are more than enough to keep them efficient even if the role players are not stepping up. If they can cause turnovers and run while getting the whistles in half court sets, there's not much the Spurs defense can do.

How the Spurs can counter it

Limit live ball turnovers from role players, for starters. Being assertive on offense means taking open shots. As counter-intuitive as it may sound, the Spurs need to take those good shots they usually pass up while looking for great shots. The Thunder's defense is so quick that they're often able to recover and deny the great shots, which pushes San Antonio deep into the shot clock. That's when someone panics and tries to make a pass that simply isn't there or drives into the teeth of the defense with no plan. Turnover, fast break, OKC bucket.

After a couple of sequences like that, Parker usually starts straying from the playbook because he stops trusting his teammates, which causes the offense to stagnate as he tries to force feed Duncan or score himself. I love it when Tony is aggressive but it becomes predictable pretty fast, making the defense's work easier.

As for the fouls, OKC is great at getting to the line. They do it against every team. They will continue to be great at it. The only thing the Spurs can do is try to avoid the cheap ones. Leonard got his third using his arms when setting a screen. It was not a great call -- considering the amount of contact the refs were allowing throughout the game -- but it's the type of call the Spurs should always try to protect themselves against.

Why it's possible for the Spurs to beat OKC

Again, what I've just written is not news. I could have written it before the game. Anyone who has paid attention to the clashes between these two teams knows that the Thunder pack the paint, try to create turnovers and run. They get to the line. They score from mid-range if the defense sags. In general, OKC's strengths are the same they were two years ago and the Spurs still have the same weaknesses too. The Thunder will continue to be a really tough matchup for the Spurs.

But that doesn't mean that the Spurs can't figure them out. They just need to make adjustments, and the good thing is, they'll have time. Unless something really strange happens in the next couple of weeks, San Antonio won't meet the Thunder until the Conference Finals. Who knows what the circumstances will be then. Hopefully, The Spurs will have Ginobili available and will have the ideal rotations figured out.

Not so long ago, the experts considered the Thunder to be the underdog against the Spurs, and we all know how that went. It seems the tables have turned. Now it's the time to see what Pop and the boys can do to breach a great obstacle. Keep pounding that rock, Spurs. Like you always have.