Analyzing how the Mavericks are containing Tony Parker

The Dallas Mavericks have made it their mission to prevent Tony Parker from excelling and so far they are succeeding at it.

Share All sharing options for: Analyzing how the Mavericks are containing Tony Parker

Tony Parker is averaging 15.5 points and 4.5 assists in 30 minutes a game in the postseason so far. Those would be solid numbers for almost any point guard in the league but they are not what the Spurs were expecting of Parker after a stellar 2013 playoff run. A dominant Parker is almost a prerequisite for the Spurs' title aspirations to be legitimate but that's not materializing.

The most frequently heard explanation is that he is hurt. Tony has not come close to the MVP-caliber form he displayed last season and fatigue from playing for the French national team and lingering injuries could be causing the dip in production. I think that's a fair and reasonable possibility. Parker has faded as a scorer in second halves and he had his worst game yet when the Spurs only had a day to rest.

But it's impossible to discuss Parker's struggles without examining how the Mavericks are defending him.

Here's a how the floor looks to Parker in virtually every possession. 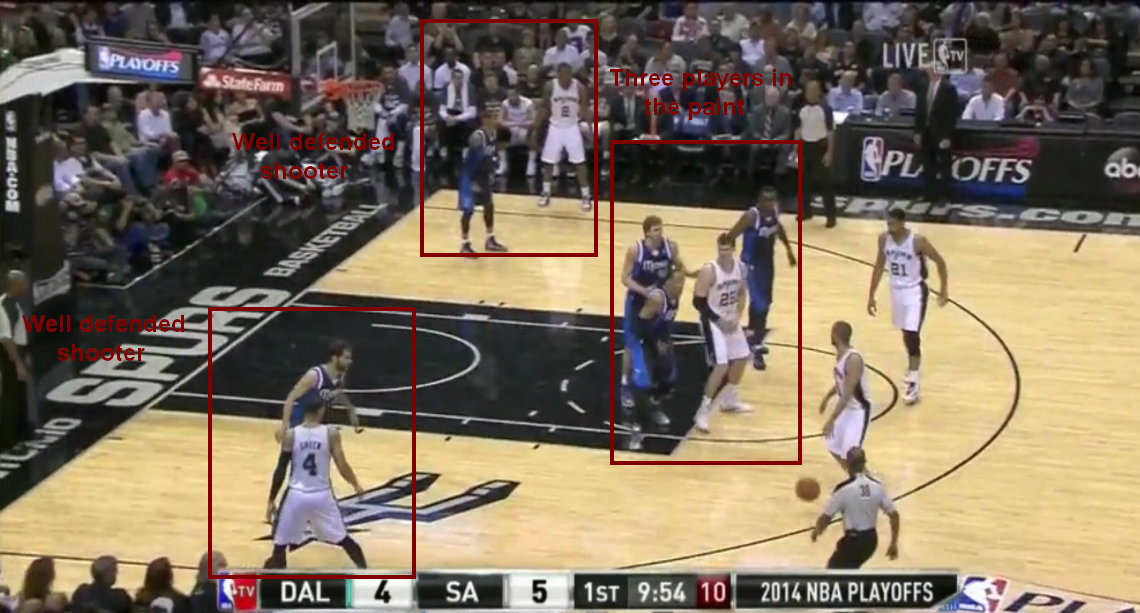 Tony's shooters are closely defended and the Mavs' bigs are solely dedicated to stopping him from creating good looks. Any attempt to screen for him is usually followed by a switch to take the dive man out of the equation. Since neither Splitter nor Duncan are a threat from outside, the bigs can pack the paint while the perimeter defenders stay at home. Parker then has two options: 1) take the mid-range jumper as his defender sags or 2) look for the switch, turn on the jets, get past the defender and finish at the rim. There are no other options with him as a ball handler; the Mavs have made it a priority to ensure that.

Parker performed option 1 perfectly in games two and three, going a combined 11-17 from mid-range, and option 2 in game one when he went 8-9 at the rim. In game four nothing was working, as he missed both from inside and out. But Parker seems equipped to handle the Mavs defense as a scorer. In fact in the first three games, Parker was averaging 17.3 points and five assists on 53.7% shooting, numbers that are about what was expected of him, especially considering this has been a low scoring series.

The starting unit has regressed offensively

Despite Tony posting solid numbers, the starting lineup has been outscored by 13 points in 41 minutes of action. Defensively, they have been stout, allowing fewer than a point per possession. But offensively, the unit has been a mess. The assist to turnover ratio has been low and there is no outside shooting at all. If that sounds familiar it's because the exact same thing happened early in the regular season.

The Spurs seemed to have gotten past those problems during their win streak thanks to some timely shooting by the wings and a faster pace. They haven't been able to do that here. Green and Leonard have taken a single three pointer each with that unit and the lineup is playing at a pace that would have them rank in the bottom five in the league. And the credit should go to the Mavs.

Dallas is showing tremendous restraint on defense. Calderon stays glued to Danny Green at all times and, while Ellis sometimes gives Leonard a little more room, he uses his speed to close out and force Leonard to put the ball on the floor. They rarely double the post and usually do it with a long player to obstruct passes. They don't help on penetrations from Parker. There is no way for a wing to get a three pointer up unless a play is designed specifically to get them the shot.

So if the Spurs are having such a hard time scoring against the Mavs' set defense, why don't they pick up the pace and attack before they have time to set it? You need to create turnovers or secure rebounds easily to do that and Dallas is making both tasks as hard as possible. With the turnover-averse Calderon running the show and a simple offense that has no problem resorting to simple pick-and-rolls or isolations, the Mavs have managed to limit their live-ball turnovers. Against the starting lineup, Dallas has only turned over the ball eight times. And they are doing a great job of corralling offensive boards (a gargantuan 31% offensive rebound rate) or at least contesting them using only their center and a wing, which allows them to have enough defensive balance to prevent the Spurs from unleashing their deadly secondary break.

So with no opportunities for the shooters and no chances to run, the only thing preventing a complete collapse is the shot creation from Duncan and Parker.  Between the two they have combined for 41 of the unit's 68 points and Parker has notched six of the total 14 assists. Parker is getting a lot of criticism but you could easily make the case that he has been the only reason the starters haven't been an abject disaster early on in games.

What happens to Tony in third quarters?

As mentioned, Parker starts well and then fades as a scorer. He does great in first quarters, reasonably well in second quarters and then disastrously in third quarters. His usage percentage drops dramatically and his efficiency is not far behind. So what happens? The Spurs marginalize Parker in an attempt to get Leonard and Green going.

This is the time that Parker posts his best numbers in terms of defensive rebound percentage, assist percentage and turnover percentage, so it's not like he disappears completely. He just takes a back seat to other players to start the third quarter.

Parker is either not in the play at all or actively trying to get others involved. That has happened four games in a row, so it's not a coincidence.

The Spurs often start the second half favoring dribble hand-offs between Duncan and Leonard. They occasionally try to get Green involved by running variations of their usual plays. That means Parker is used as a facilitator, screener or floor-spacer more often than he does at other times. While the stars pull the offense to themselves on first quarters, the role players get the looks in the third. Unfortunately, that doesn't improve the Spurs' ability to put points on the board.

Compounding problems, the Mavs take advantage of an offense that is stuck in mud and force turnovers or run off outside misses. Their points off turnovers and fast break points sky-rocket in the third, which causes the defense to suffer greatly. Typical starting unit offense but atypical starting unit defense: that's why the third quarter collapses happen.

The starting lineup is going to continue to struggle creating Spurs-y looks off ball and player movement because of their offensive limitations and Rick Carlisle's game plan. Fortunately, Parker and Duncan seem to be good enough one-on-one scorers to at the very least keep the offense from completely falling apart as long as the half court defense remains as great as it usually is. Unless the Mavs are able to run, the Spurs can stay close.

During the regular season, the bench provided the separation needed to put teams away. That needs to continue to happen in the post-season for the Spurs to get far without tweaking their starting unit. Having Manu Ginobili playing at such a high level obviously helps. Now the rest of the subs need to step up.

As for Tony, he hasn't been nearly as bad as he has looked at times. He might not be 100% healthy but he routinely gets past the first defender using his speed. In fact, Parker trails only Jeff Teague (who has played five games to Tony's four) in total drives. The problem is those don't yield points because the Mavs have made it a priority to keep Parker from scoring by exploiting the Spurs' spacing issues to pack the paint after he torched them on Game 1.

Stats courtesy of NBA.com/Stats and Nbawowy!