A familiar defensive problem is plaguing the Spurs

San Antonio's defense has returned to elite status by focusing on stopping the opponent from taking and making efficient shots. But there's no solution when the inefficient looks start to fall.

Share All sharing options for: A familiar defensive problem is plaguing the Spurs

Dallas had an offensive rating of 121.5 in game two against a vaunted Spurs' defense that only allowed 100.1 points per 100 possessions in the regular season and held the Mavs to below that mark in game one. A quick look at the final stats suggests the Mavericks simply feasted on points off turnovers, which is true. The Spurs gave up the ball 24 times and Dallas did a fantastic job of capitalizing on those mistakes with timely shots. But of the 33 points off turnovers the Mavs scored, only 17 came on the break. The Mavericks won the game in the half court, not by converting live-ball turnovers into immediate points. So how did they manage to be so effective against the Spurs' set defense? With mid-range shots and floaters.

I think most Spurs' fans know this by now but it bears repeating after Wednesday's performance: the San Antonio defense readily concedes the in-between game, especially after ball screens, in order to limit three pointers and shots at the rim. The guards will either go under the screen, daring the ball-handler to take the shot, or trail while the big man drops into the paint to deter penetration, allowing the floater. It makes a ton of sense on a macro level because, in a big enough sample size, the average percentage from those spots is much lower than the one teams get at the rim, and conversions from inside the arc grant fewer points per shot than three pointers.

Here's the problem: freaky things happen in single games. Things like the Mavericks shooting a ridiculous 45.5% from mid-range on a whopping 33 shots (before Pop threw in the towel with 5:40 to go in the fourth quarter). 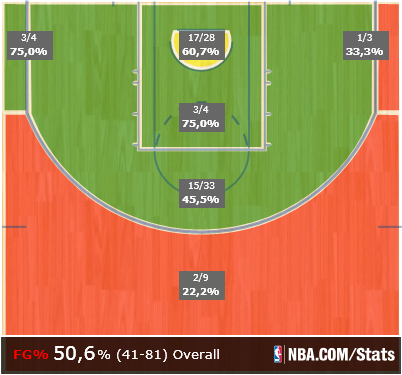 Dallas is the best team in the league from mid-range -- shooting at 42.8% -- which suggests the high percentage is not out of the ordinary. But while only 27.6% of their field goal attempts came from mid-range on the regular season, in game two, that number climbed to 38%. Even with all of the extra possessions the Spurs turnovers granted the Mavs, San Antonio did a good job of limiting above the break three pointers and shots in the paint while forcing misses at the rim. So Dallas resorted to mid-range jumpers and managed to be even more efficient than they were in the regular season. There's no other way to put it: the shooting from mid-range was instrumental to Dallas' win.

The Mavs did most of the damage from mid-range in the second half. They were only 7-18 for 38.9% during the first two quarters. But we have to add floaters to that number since that's the other in-between shot the Spurs allow. There were three floaters (two by Devin Harris and one by Brandan Wright) in the first half, without counting the ones by Marion and Blair that didn't came after ball screens. That puts the Mavs' field goal percentage on in-between shots at 45.4% on 22 shots in the first half (including floaters) and 53.3% on 15 attempts (no floaters) in the second half, not counting garbage time.

To say the mid-range game helped the Mavs greatly in game two would be a gross understatement. The floaters allowed their bench to put up points and not fall behind in the first half, but a stretch in the third quarter in which mid-range jumpers stopped a Spurs run shows just how dependent the Mavs are on the in-between game and how helpless the Spurs are to defend it.

After Ginobili cut the lead to eight with 4:53 to go in the third quarter, the next four Mavs baskets came on mid-range pull ups; three by Calderon and one by Ellis. The Spurs made two three-pointers and a layup in a little over two minutes but because the Mavs were scoring on almost every trip -- especially on shots the Spurs want opponents to take -- they found themselves with a 12-point deficit after Calderon had an and-1 following a foul by Mills on his third pull up. It was smooth sailing from then on for the Mavs, who survived the Spurs' push and then extended their double digit lead.

The fact that Dallas is hitting those shots at such a high rate puts the Spurs in a bind. They could try having the bigs not drop as much, but they are simply too slow to contain Ellis, Harris and Carter when they come at full speed. Switching could have the same downside. They could put Kawhi Leonard on Marion instead of Ellis and use him as a help defender since he is quick enough to recover to shooters in time. Pop could also give some minutes to Cory Joseph, who for all of his limitations, does excel at fighting through screens.

But ultimately, the Spurs are probably going to stay the course and wait for those jumpers to fall less often. Some regression is to be expected. The Mavs are arguably the best shooting team in the league but, as mentioned, the efficiency they showed in game two was surprising even for their standards. Especially considering Nowitzki, an absolute killer from mid-range, wasn't the one doing the damage.

Changing the game plan drastically could cause more harm than good. While I'm sure he will introduce some tweaks to the defense, Pop is likely having the players focus on things they can control. After all, without those extra 21 possessions stemming from the disparity in turnovers and offensive rebounds and without some corner threes that came after defensive breakdowns, the Mavs' offense would have been under a lot more pressure. If everything else is working at a normal level, the Spurs should be able to contain Dallas, even if those jumpers keep falling.

But they can't afford to make too many mistakes against a team that is naturally equipped to take advantage of one of the built-in deficiencies of their defense.  While on its own it's not enough of a problem to be their undoing, the Spurs' persistent inability to defend the in-between game could be a factor in this series and -- provided they find a way to beat the Mavs -- going forward.